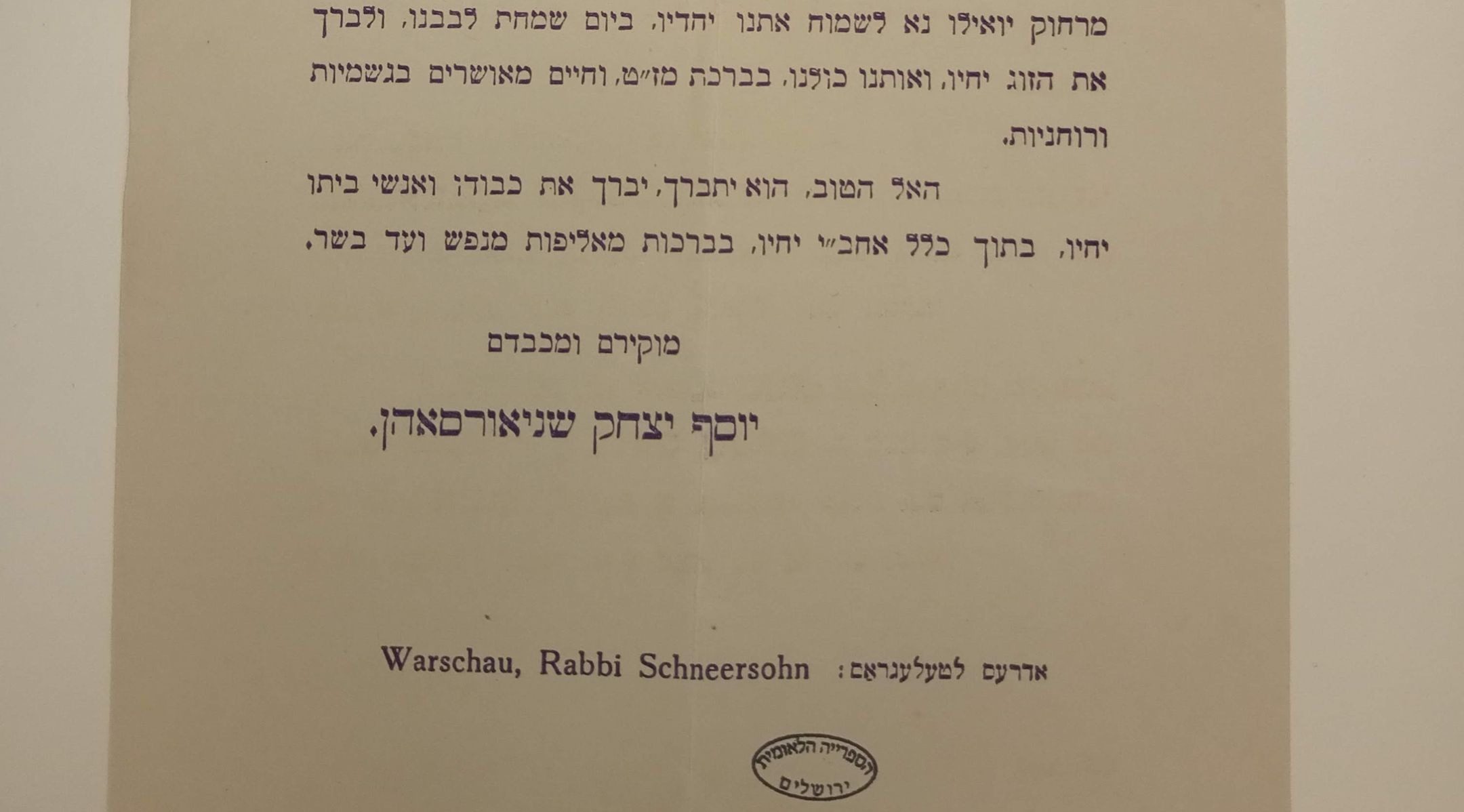 Detail of the invitation to the 1928 wedding of Rabbi Menachem Mendel Schneerson to Chaya Mushka Schneerson. (Courtesy of the National Library of Israel)
Advertisement

(JTA) — An invitation to the 1928 wedding of the seventh and last Lubavitcher rebbe, Rabbi Menachem Mendel Schneerson, was discovered at the National Library of Israel in Jerusalem.

Schneerson popularized the Chabad-Lubavitch hasidic movement and through aggressive outreach to non-affiliated Jews became of one of the most influential forces in the Jewish world. The discovery of the invitation comes just days before the 25th anniversary of his death on June 12.

Several versions of the invitation were prepared for the wedding of Schneerson and Chaya Mushka, the daughter of the sixth Lubavitcher rebbe, Rabbi Yosef Yitzchak. The invitation at the National Library, discovered in the archive of Levi Yitzchak Schneerson, a cousin who moved at a young age to Palestine, was sent to invitees who could not physically be present at the event but encourages them to celebrate from afar.

While the groom was then a student at the University of Berlin and the bride lived with her parents in Riga, the wedding was held in Warsaw because it was a central location and not under Soviet rule. Soviet authorities prevented Schneerson’s parents, who lived in Yekatrinoslav, Ukraine, from traveling to Warsaw to attend the wedding. They held a celebration at their home for hundreds of guests.

“At this early date, it wasn’t at all clear that Rabbi Menachem Mendel would eventually succeed his father-in-law as the Lubavitcher rebbe,” said Rabbi Dr. Zvi Leshem, head of the Gershom Scholem Collection for Research in Kabbalah and Hasidism at the National Library of Israel. “In hindsight, we see that not only did he become the rabbi of Lubavitch Hasidism, but without a doubt one of the most famous Hasidic and even Jewish figures known throughout the entire world.”

Schneerson’s cousin Levi Yitzchak also was born in Russia. When he moved to Palestine he became a member of the NILI underground organization, serving as a liaison between its operatives and British intelligence during World War I. Following the war, Levi Yitzchak Schneerson reported on Arab affairs throughout what is today Israel, Jordan and Syria. He composed poetry, mostly in Russian, and published two books: an autobiography about his time in the NILI underground, and an early history of the northern Israeli city of Hadera.

The archive was recently reviewed with a grant from the Leir Foundation.