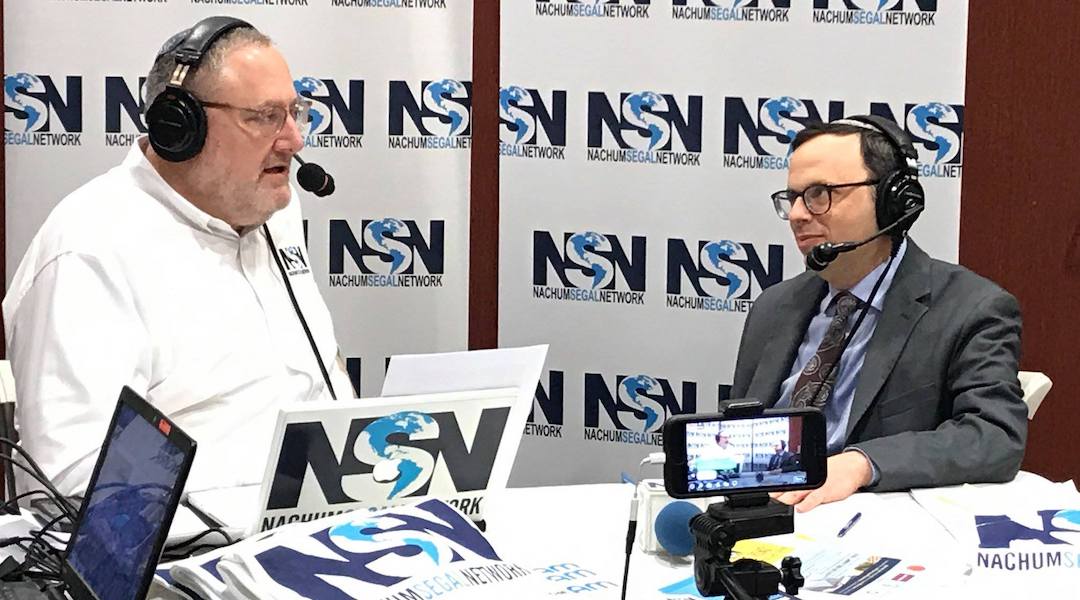 Rabbi Adam Starr, right, of the synagogue formerly known as Young Israel of Toco Hills, appears on the "JM in the AM" radio show, January 2019. (Facebook)
Advertisement

(JTA) — A large Orthodox synagogue in Atlanta is breaking away from the Young Israel synagogue movement.

The exit comes months after its rabbi protested the movement’s right-wing political positions.

In a statement provided Wednesday afternoon to the Jewish Telegraphic Agency, the Young Israel of Toco Hills announced that its name would henceforth be Kehillat Ohr Hatorah, Hebrew for “light of the Torah.”

An email sent to the congregation Wednesday said that 93 percent of voting synagogue members voted to disaffiliate from Young Israel.

“After deliberation and through an open and inclusive process, our members have decided to no longer affiliate with the National Council of Young Israel due to our organizations not being a strong fit for one another,” the statement by Rabbi Adam Starr and synagogue president Marc Sokol said.

The president of the National Council, Farley Weiss, said he wished the Atlanta synagogue well but that he does not anticipate making any changes based on its decision.

“With any organization, any business, you can’t always necessarily please everyone all the time, and even if you do nothing because you’re afraid of alienating people, there will be people angry at you for doing nothing,” he said. “I know we had a very public disagreement, but they have done everything very respectfully in their decision, and we appreciate that, and they have every right to do what they decided to do.”

The synagogue will remain a member of the Orthodox Union, a larger umbrella group. The synagogue added in its statement that “We wish the National Council of Young Israel the best as they continue to serve Klal Yisrael,” Hebrew for the people Israel.

Three months ago, the National Council of Young Israel issued a statement defending a political deal with the Israeli far right orchestrated by Prime Minister Benjamin Netanyahu. Critics of the deal said it legitimized a fringe extremist group.

The National Council later clarified that the statement did not necessarily speak for all members.

The National Council has been vocally supportive of the Israeli right and President Donald Trump. Its gala dinner this year featured Republican leaders as keynote speakers, as well as vocal Trump supporters. A statement Wednesday from the organization condemned Democratic presidential candidate Pete Buttigieg for threatening to withdraw aid from Israel if it annexes West Bank settlements.

Starr told JTA this year that he did not think the National Council should be opining on hot-button political issues.

“I would have liked an apology for speaking on our behalf, with divisive issues that are not representative,” Starr told JTA in March. “My approach is not about whether it’s right wing or left wing. A synagogue organization should not be making deeply divisive political statements on our behalf.”

Lipstadt received an email from Starr on Wednesday that read “Welcome back!”

“I think it’s great,” Lipstadt told JTA afterward. “I resigned because I disagreed with what the National Council of Young Israel did. … I’m very happy to quietly rejoin. I love the synagogue. I think it’s a wonderful place. I appreciate the leadership and I’m glad to be fully back on board.”