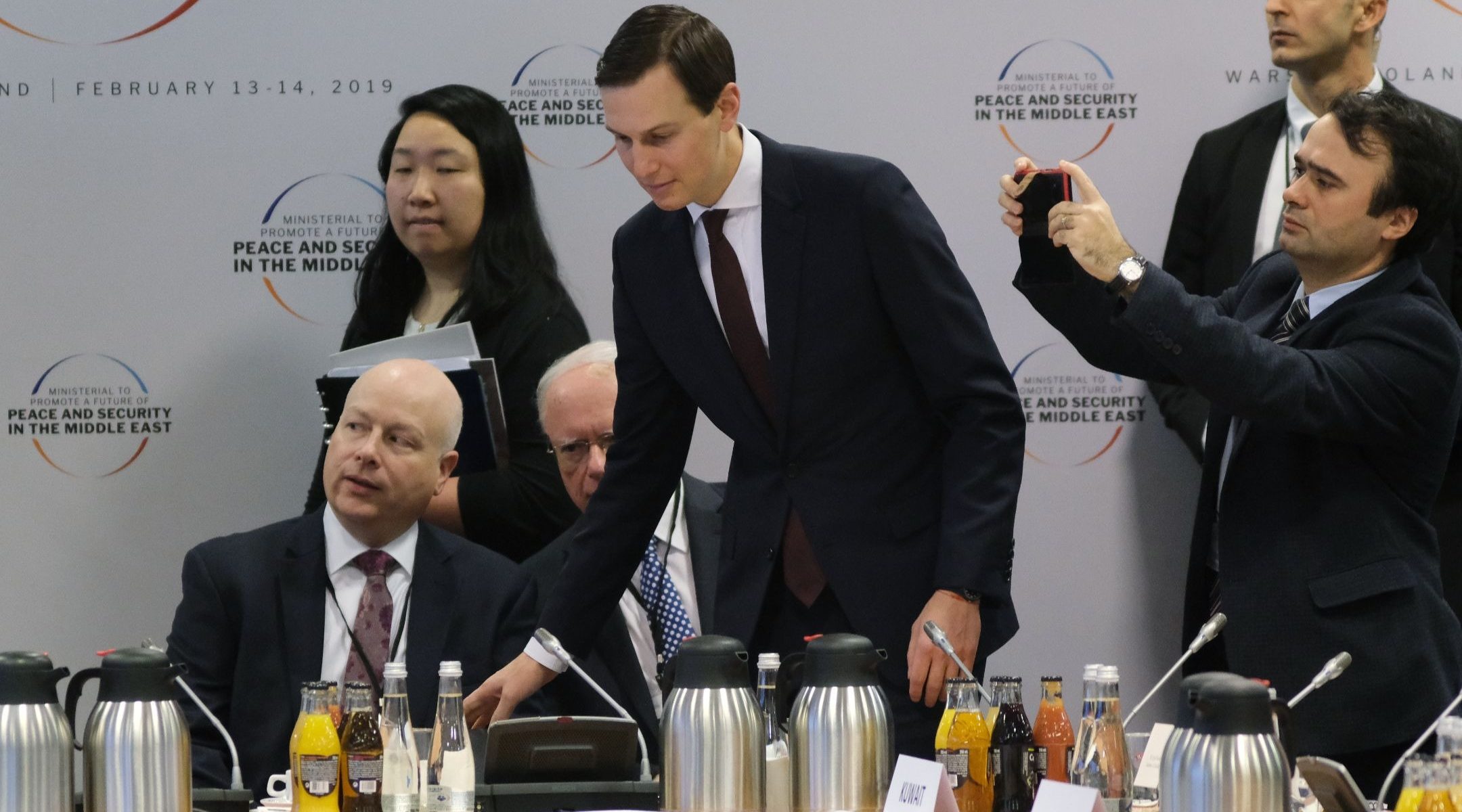 WASHINGTON (JTA) — Don’t call it a peace plan, call it an “economic vision.” And don’t call the event that will unveil it next week a summit, it’s a workshop. To benefit Israelis and Palestinians. Whose officials won’t be there.

Bahrain, a tiny Persian Gulf state with close ties to the United States and one of the friendliest in the region to Israel, will host … a get-together June 25-26 to promote investment in the Palestinian areas.

It’s the first step in the plan, proposal or vision that the White House team led by Jared Kushner, President Donald Trump’s son-in-law and senior adviser, has shaped to bring about Israeli-Palestinian peace.

The language used by the Kushner team in recent weeks appears to set a low expectations bar: “Workshop” is the preferred description in statements from the White House, only finance ministers will attend and it’s a “vision,” not a plan.

A week away there are still plenty of questions, not just about what Kushner hopes to accomplish, but even about who is attending and what the hoped-for outcome will be.

The United States and Bahrain are co-hosting, and RSVPs so far have included finance ministers from the United Arab Emirates and Saudi Arabia. That’s it as far as confirmed attendants.

Oman has said it might send its finance minister. Qatar reportedly is coming. A U.S. official last week told The Washington Post that Jordan, Egypt and Morocco would attend, setting off a firestorm of criticism in the Arab world. Morocco and Egypt did not confirm they would attend.

Jordanians as of last week said they might attend, the Christian Science Monitor reported, if only to make clear that the outcome of any deal should include Palestinian statehood. Jordan, whose population is half Palestinian, has been reeling from the retreat by Israel and the United States from the two-state outcome.

The Palestinian Authority is boycotting not just this event but the entire Kushner peace process. At first it embraced Trump’s initiative — its officials believed that Trump’s pro-Israel cred would extract concessions needed to advance the process. Things soured after Trump recognized Jerusalem as Israel’s capital.

Iraq, citing solidarity with the Palestinians, is making a show of not attending. Palestinian businesspeople issued a statement through an umbrella group that they rejected the sequencing: National aspirations come before economic development, they insisted.

“The private sector rejects any attempts to circumvent the issue of sovereign rights of the Palestinian people,” Osama Amro, the group’s chairman, told The Media Line, a Middle East news site.

One Palestinian businessman from Hebron, Ashraf al-Jabari has announced his intention to attend. He’s on the outs with the Palestinian leadership.

Israel is not sending officials, although a former liaison to the Palestinians, Yoav Mordechai, will attend, according to The Times of Israel. Otherwise, Israeli businesspeople “in the single digits” will be present.

It appeared at first as if Israeli officials would attend, and then the foreign minister, Yisrael Katz, clarified this week that the delegation would only be businesspeople.

Jason Greenblatt, the top negotiator on Trump’s team, suggested that photo ops of Israelis and Arab businessmen would be premature.

“We are not looking just for a photo op, if you will,” he said Monday at an event in New York organized by Rabbi Shmuley Boteach’s World Values Network as reported by Jewish Insider. “It’s much more substantial than that. Israel is neither a donor country nor a beneficiary of the projects.”

David Makovsky, a distinguished fellow at the Washington Institute for Near East Policy, said that Arab states might have been wary of appearing together with Israeli officials, lest any camaraderie be seen as a boost to Prime Minister Benjamin Netanyahu. The Israeli leader is under political siege and facing tough elections in September.

“We don’t know the answer, but I wonder if some of the Arab states got cold feet because of the new Israeli election and thought that it would be viewed as somehow interference in the Israeli election,” said Makovsky, who is attending the Bahrain conference as a guest at the invitation of the U.S. and Bahraini organizers.

Trump administration officials, including Kushner, and Netanyahu have insisted for months that the Sunni Arab world has turned around, and is closer than ever to embracing Israel. That outlook may be premature, said Tamara Cofman Wittes, a senior fellow at the Brookings Institution who was a top Middle East official in the Obama administration.

“What you’ve heard from White House officials ever since the Jerusalem embassy decision is the dismissal of the idea that Palestinians are a salient issue in the Arab world,” she said, noting that Trump officials mock those who predicted that the embassy move would spark riots.

“That reveals a fundamental misunderstanding of the way Palestinian issue plays out” among other Arabs, Cofman Wittes said. “It is a question of public sentiment” in favor of the Palestinians. “When those Arab leaders are feeling anxious about their own regime security and legitimacy and repressing protests, they cannot afford to repress public protests about Palestine.”

Greenblatt said it might have been different if the Palestinians had attended.

“If the Palestinian Authority was willing to come, of course, we would invite Israel,” he said. “Having them both in the room can only be positive.”

Another factor could be Netanyahu’s electoral considerations. Any direct Israeli government involvement in a peace process, however inchoate, would likely invite accusations from parties to the right of his Likud that Netanyahu is ready to make concessions.

Greenblatt, on his Twitter feed and through the White House, has heralded an op-ed he wrote this week for CNN saying the workshop is the “opportunity of a generation.” An opportunity for what exactly is never made clear: The first three paragraphs are vague and use action words of the kind one sees in pitches for networking events (“vision,” “galvanize,” “share,” “enhancements”).

The subsequent 11 paragraphs are a screed attacking Saeb Erekat, the Palestinian negotiator who has spoken out against the workshop and once was friendly with Greenblatt. The op-ed jarringly attacks Erekat, addressing him by his first name.

“Well Saeb, the Palestinian Authority hardly has any money because of all the waste, corruption, and the payments made to terrorists,” Greenblatt wrote.

Kushner and Greenblatt have said that the political component of their peace plan won’t appear until after the Israeli elections.

Reports have said that Kushner is hoping for $50 billion to $70 billion in pledges in the long term, although it is not even clear whether he expects them to be announced at this conference.

Makovsky said he hopes to see not just a long-term “vision” of investment in the Palestinian economy, but near-term goals addressing the dire state of infrastructure in the Gaza Strip, including sewage, the water supply and electricity.

“Whether this is a vision or a plan is at the crux of this,” he said.

Jonathan Schanzer, a vice president at the Foundation for Defense of Democracies, said a major get would be substantive pledges from the Sunni Arab states.

“If there are real commitments from the Arab world drawing from its immense petro-wealth for the betterment of the Palestinians and the advancement of peace, then this conference will be very worthwhile,” said Schanzer, an expert on the Palestinian economy.

How one then gets that money to the Palestinians is another question considering the documented corruption in the West Bank and the control of the Gaza Strip by Hamas, a terrorist group under sanction by the United States.

Danielle Pletka, the senior vice president for foreign and defense policy at the American Enterprise Institute, said that even an outline of how the Palestinian economy might normatively function would pay benefits.

“Anything that sets the Palestinians on the way to an economy that’s more responsive to the needs of their people isn’t a bad thing,” she said.