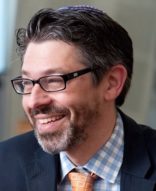 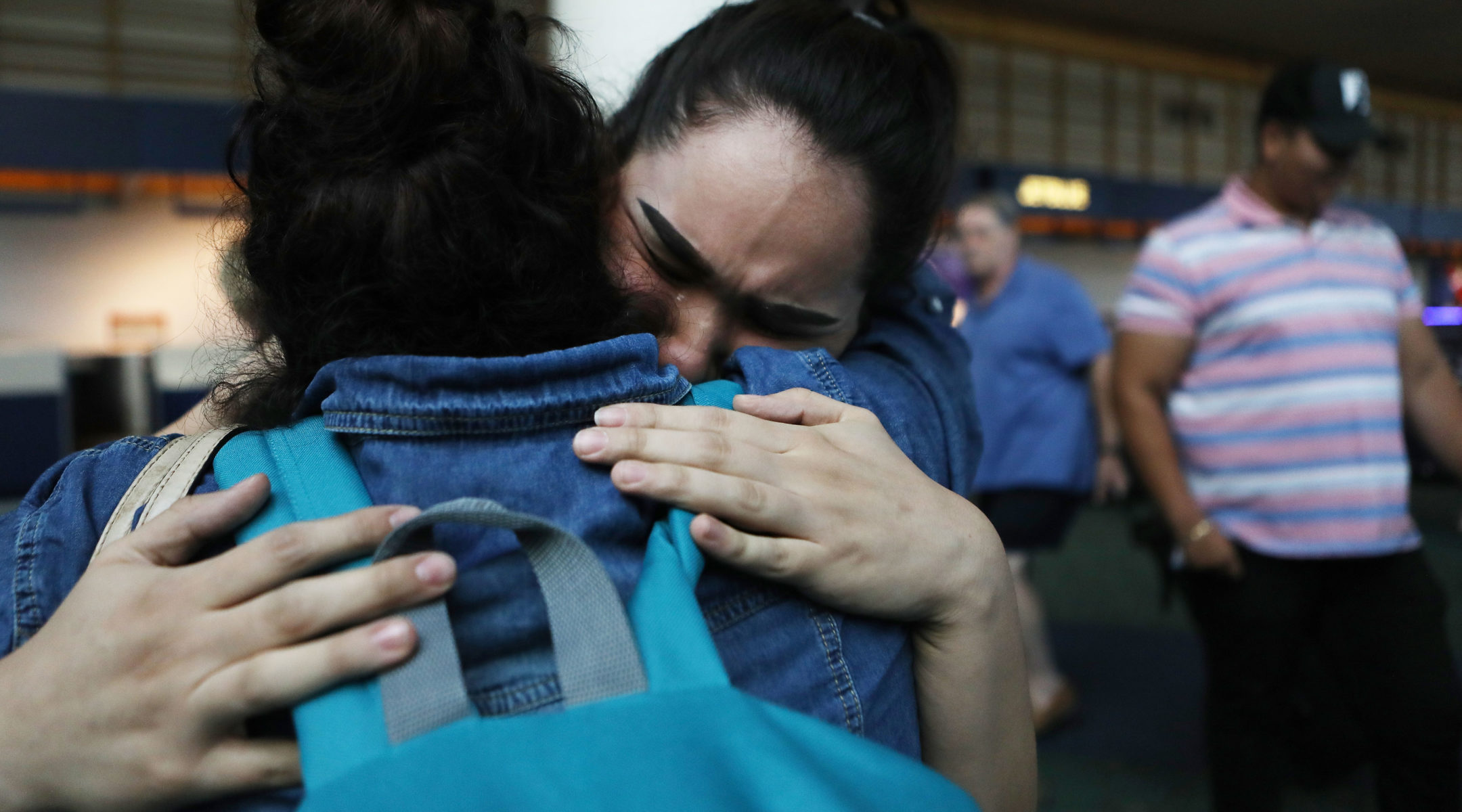 An immigrant released after spending six months in an ICE detention facility hugs her daughter while being reunited with family at Portland International Airport, Sept. 2, 2018. (Mario Tama/Getty Images)
Advertisement

MOUNT KISCO, N.Y. (JTA) – Last summer, I was on the phone with the Immigration and Customs Enforcement officer assigned to Armando Rojas, our deported synagogue custodian of two decades, assuring him that I could vouch that he is not a flight risk or a danger to the community. That should have been obvious: Armando had no criminal record, a steady job and a family who needed him.

The ICE officer’s responses were taut and clipped.

Without thinking about it much, I said, “Well, I just want you to know how important he is to us. And I want to thank you for taking such good care of him.”

For the first time in the conversation, there was a pause, and the ICE officer seemed caught off-guard. Finally, he said, ”Many people don’t understand that, but that’s what we do and what we are here for. To help people. I appreciate you saying that.”

There has been a great deal of heated debate about whether it is appropriate to call the growing number of immigration detention facilities in this country “concentration camps,” a term most recently used by Rep. Alexandria Ocasio Cortez. I will leave it to scholars to parse the terms of rhetorical escalation.

But what I can say from personal experience with our opaque immigration system is that it is not only devastating for those who go through it, but also for the Americans who are employed by it. Using terms like “concentration camp” may have technical merit, but I worry that it actually frees those working in the system from taking any criticisms seriously.

Armando came to this country from Mexico nearly 30 years ago. In the 20 years he worked in our synagogue, he paid Social Security, Medicare, state and local taxes.

While Armando was in ICE detention awaiting deportation, our attorney filed for a stay with a judge. Within a week he was suddenly, and without any notice to his family, deported to Mexico. This was in February.

I emailed the ICE officer assigned to his case the day he was deported asking him to call me. Hours later I received an email back from the officer saying he “regretted” to inform me that Armando was put on a plane to Mexico “before his attorney was able to file a request for a stay.”

As it turned out, the stay of deportation was actually granted before Armando was deported, a factor an immigration judge later pointed out, scolding the government for “erroneously deporting” Armando.

The truth was, the ICE officer knew all along that our attorney was working on a stay: Our attorney had spoken with him as soon as Armando was placed in ICE detention. Subsequently the officer had been difficult to reach, sometimes going a few days without returning our attorney’s calls.

By the time I responded to the ICE officer, we had heard from Armando on the other side of the border and what had happened to him. I emailed the ICE officer back, CCing our congregational leadership, decrying the fact that Armando was dropped into a country he hasn’t been to in decades with no chance to collect belongings or money, nor to contact his family.

I added that “Armando is beloved in our community of 500 families; he is a kind, generous and caring person. But you didn’t need to know any of that in order to know that no human being should ever be treated this way.

“And you ‘regret’ to inform me? Is this how you always treat human beings?”

I received no communication back.

I do believe the ICE officer “regretted” the swiftness of the process. I also know that he was working in a system with orders from the top to speed up “expedited removals” of “aliens.” Both the process and the language are built to distance those who function within it from relating to the people in their care as human beings.

Later we learned that the ICE officers who dropped Armando’s group at the border taunted them, saying “you’ll all probably get kidnapped.”

But should we be surprised by this behavior when we put Americans in the position of taking parents and children away from their families? 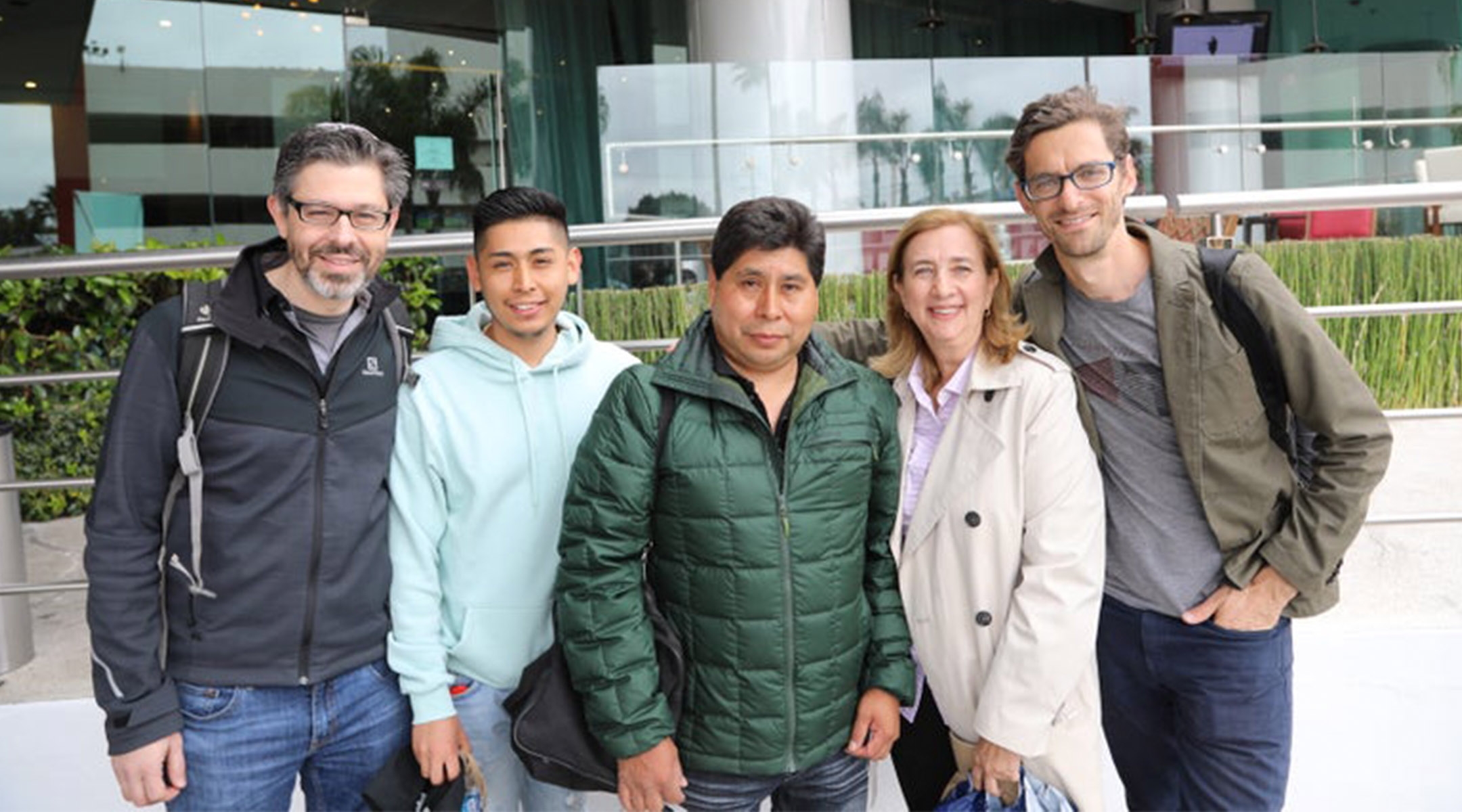 From left to right, Rabbi Aaron Brusso, Armando Rojas’ son, Rojas and congregants Linda Dishner and Mike Kraus in Tijuana, Mexico. Rojas was deported by ICE and separated from his family after working in the same synagogue for 2o years. His case is ongoing. (Courtesy of Brusso)

In April, Armando’s son and members of my congregation met Armando in Tijuana so that we could be with him while he asked for asylum. At the border between Mexico and the United States, we all smelled alcohol on the Customs and Border Patrol officer’s breath. A few yards from us, a dozen or so mothers and children sat in the dirt waiting for someone to listen to their stories, a function of Border Patrol’s metering policy of turning away asylum seekers by saying, sometimes disingenuously, that the detention facility is “at capacity.”

How else is someone supposed to cope with this but by numbing themselves?

In June, Rojas was taken into custody, sent to Albany and began waiting for a chance to seek asylum from an immigration judge.

I can only imagine what goes on in the hearts and minds of immigration employees tasked with carrying out the family separation policy. I shudder to think of what will happen to people in our country taken from their families, as well as those who receive the orders to remove them if even a fraction of the threatened mass deportations are carried out.

Immigration officials with whom I came into contact wanted to “help people,” expressed “regret” and were possibly self-medicating their way through their jobs.

While we must fight the injustice of what’s happening in our country, we must not inadvertently associate those who work in the immigration system with those who carried out a genocide. Using such language, easily dismissed, allows those complicit in the system to abdicate their own responsibility for the daily indignities and traumas they carry out, since they can rationalize away the criticisms they believe are overblown.

We don’t need to resort to hyperbole; what they are being asked to do is bad enough.

Using such loaded language also, ironically, destroys our own empathy. Calling a detention facility a concentration camp makes it too easy to distance ourselves from the full picture. In reality, ICE officers are our fellow Americans, and they are trying to do jobs that many of them did not accept under these conditions. They are being tasked with carrying out increasingly cruel policies that force them to do dehumanizing things. And we need them to see that.

If we hope to stop the dehumanization at our borders, we have to take responsibility for all of it.

Rabbi Aaron Brusso
is the rabbi of Bet Torah in Mount Kisco, New York, and serves on the Executive Council of the Rabbinical Assembly, the international professional organization of Conservative rabbis.
The views and opinions expressed in this article are those of the author and do not necessarily reflect the views of JTA or its parent company, 70 Faces Media.

Not feeling it in Zoom synagogue? Going outside could help.

By Rabbi Lisa Silverstein September 24, 2020 12:31 pm
from Kveller This link opens in a new window