This co-working space is a Jewish take on WeWork 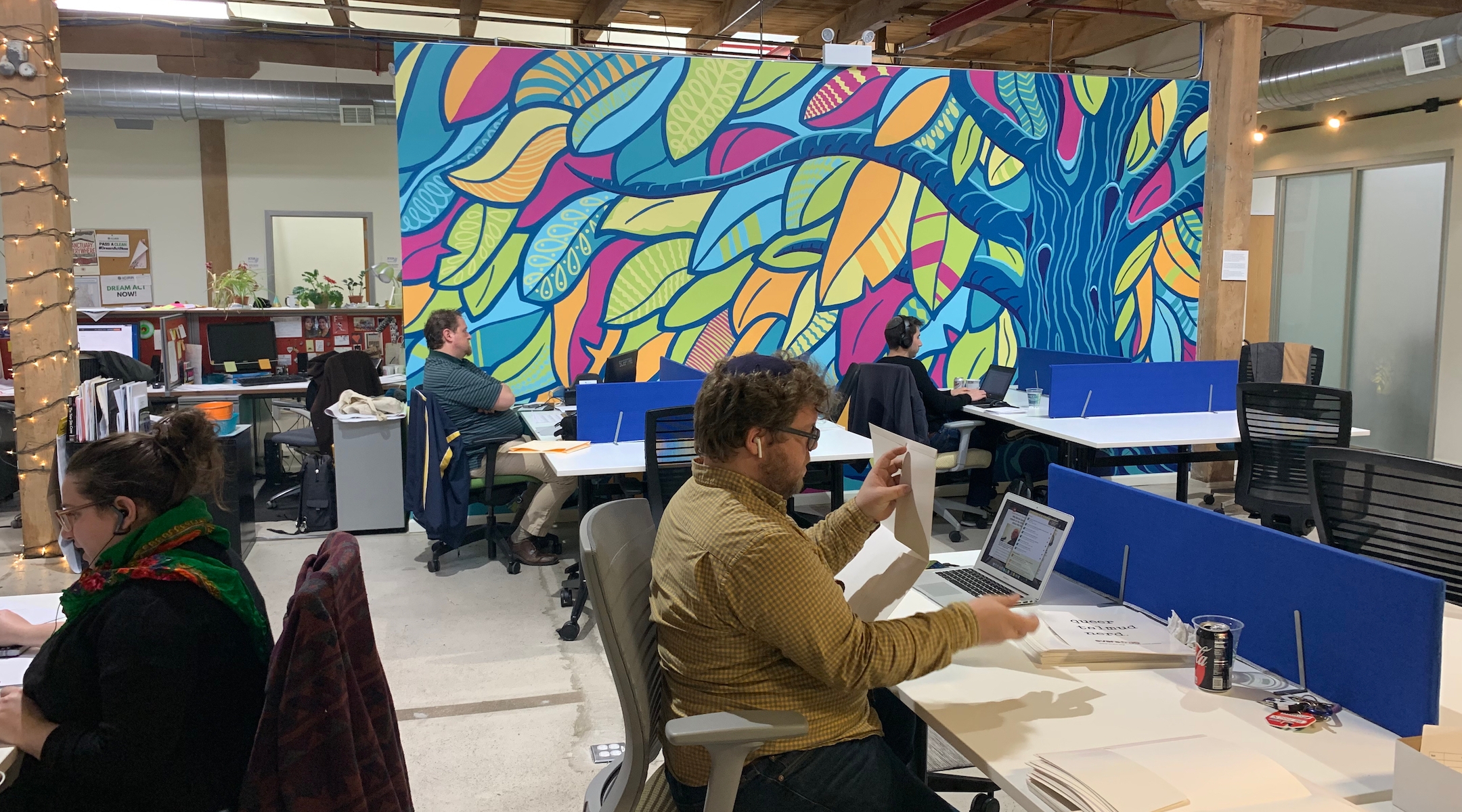 CHICAGO (JTA) — Walking into SketchPad, a visitor at first may think it’s no different than any number of popular co-working spaces that have popped up in recent years in cities across the country.

The walls are bright, the work areas are airy and decorations are simple but trendy. Millennials gather around tables with Apple laptops. One can scribble notes directly onto a wall that doubles as a whiteboard in one of the conference rooms. There are compost bins and gender-neutral bathrooms.

But visitors to WeWork — or any other popular co-working space — are unlikely to find a wellness room called “zay gezunt,” meaning “to health” in Yiddish, or a conference room called “minyan,” the Hebrew term for the quorum of 10 people required to recite certain Jewish prayers. Nor does the average WeWork have a beit midrash, or Jewish study hall, filled with Torah books and other religious texts.

That’s precisely the point, says Irene Lehrer Sandalow, who founded SketchPad at the end of 2017. At that time, nine organizations used the space in the vibrant Ravenswood neighborhood on the city’s North Side. Today that number has doubled to 18, which means that about 45 people regularly work there.

Co-working spaces have exploded over the past decade, with the most notable company in the field being WeWork. It was co-founded by an Israeli-American entrepreneur, Adam Neumann, and now has more than 500 locations around the world. The spaces are popular among freelancers and startups, and these days even host social events in addition to providing regular workspace for a fee.

Lehrer Sandalow wanted to add a Jewish twist to the successful formula.

“We really mark the Jewish calendar,” she told the Jewish Telegraphic Agency at the space in April, “because we think a lot about what does it mean to be an intentionally Jewish workspace community? Why not be at WeWork, why not be somewhere else?” 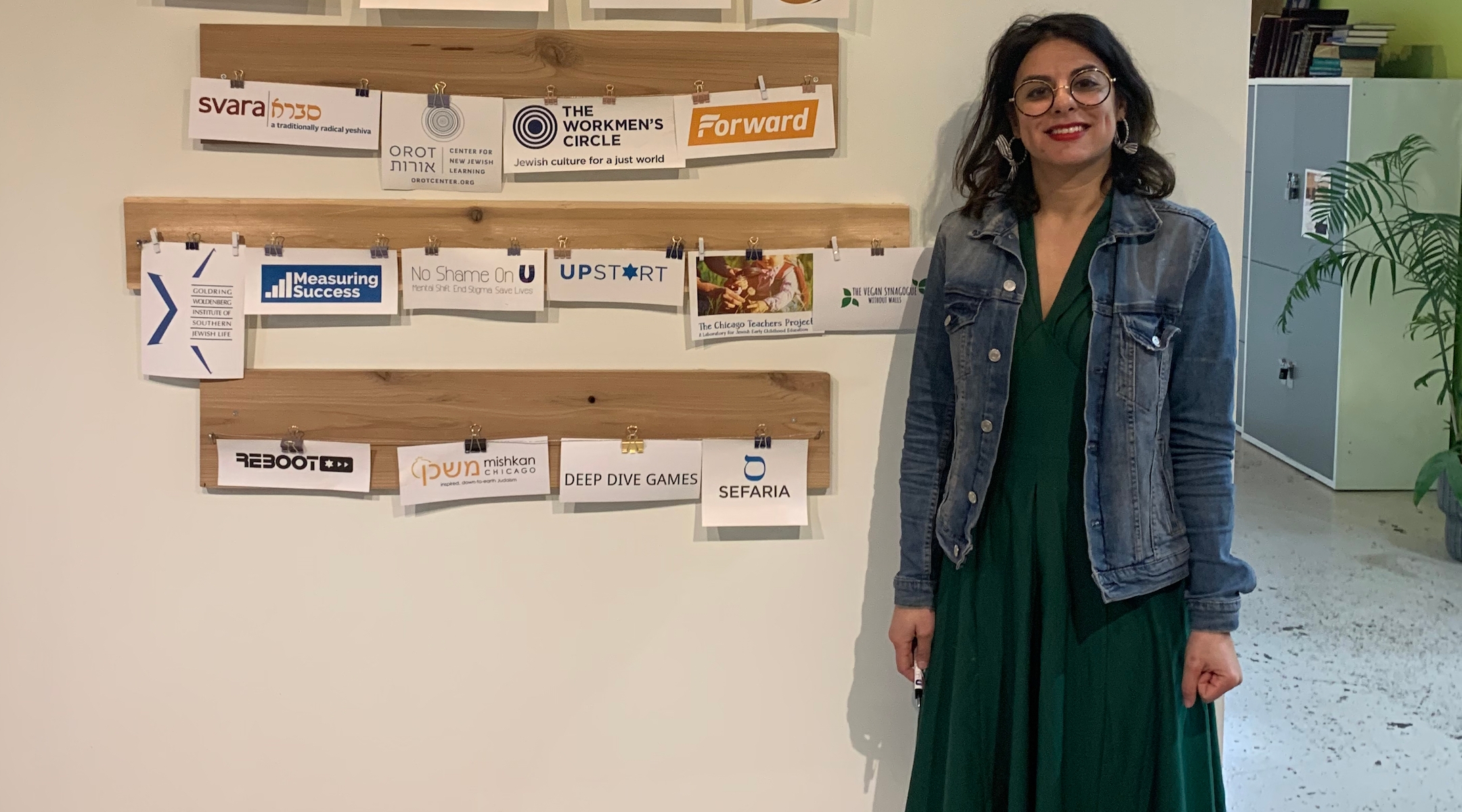 Irene Lehrer Sandalow is passionate about incorporating Jewish learning into the programming at SketchPad. (Josefin Dolsten)

SketchPad joins a small number of Jewish-themed co-working spaces around the world, including in New York; Encinitas, California; London and Melbourne.

Lehrer Sandalow, 38, came up with the idea in 2015, a year after she had moved to Chicago with her husband and was working from home on a project for the Union for Reform Judaism.

“It was very isolating,” she recalled, “so I would often call my friends and say ‘Let’s meet at a coffee shop or a Starbucks.’”

After brainstorming with local Jewish organizations and getting a number of grants, she opened SketchPad.

“We were looking for Jewish organizations who we consider ‘innovative,’ which I know is an overused word, but organizations who are always thinking about ways to engage the Jewish community in an innovative way,” Lehrer Sandalow said.

Among them are national organizations such as Avodah, American Jewish World Service and Workmen’s Circle, and Chicago-based groups including Svara, Mishkan Chicago and the Jewish Council for Urban Affairs.

SketchPad earns about 65 percent of its $320,000 annual budget through member fees, which range from $135 per month for a desk one day a week to $1,500 per month for a full-time private office. The rest of the budget is made up of donations from Chicago’s Jewish federation, the Crown Family Philanthropies and individual donors. 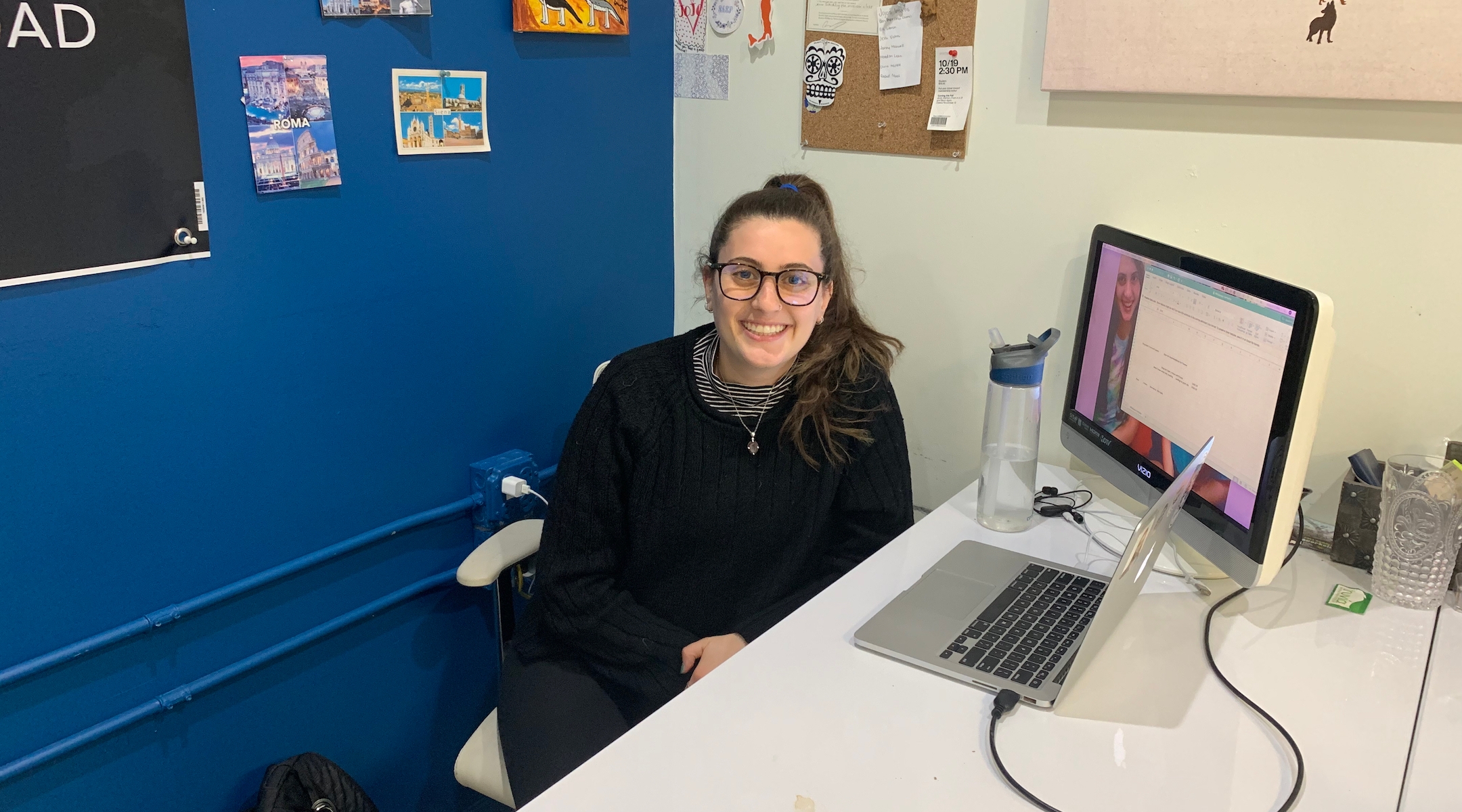 Jojo Rubnitz says working at SketchPad has given her a sense of community. (Josefin Dolsten)

Some members work full-time for one organization, while others work for several groups.

“It’s given me the opportunity to piece together somewhat of a full-time job without having to go to different locations and use different parts of my brain by working part-time for a bunch of places,” she said.

Lehrer Sandalow is passionate about incorporating Jewish programming on a regular basis, such as by hosting a charoset tasting for Passover, a sukkah-building event for Sukkot and Torah learning for Shavuot.

For some members, the programs play a crucial role in their observance of the holidays.

Leah Greenblum, 31, the Chicago community director for Avodah, did not have plans for the first Passover seder this year but was planning to participate in an event at SketchPad after work.

“I get to take part in a charoset-off tomorrow. I’m genuinely excited to go home and make charoset,” she said.

Jojo Rubnitz, a 23-year-old campus operations and marketing associate for Kahal, has found something else at SketchPad.

“Just being Jewish and working with other Jewish people, there’s a sense of community and already connection,” she said.

At SketchPad, members are directly involved in making decisions about the space and programs. Every member has to serve on a committee — there are some dedicated to membership, Jewish spirituality and upkeep of the physical space (including promoting sustainability).

“As opposed to having that customer-owner relationship, it’s more kibbutzy,” Lehrer Sandalow said. “We’re all in it together and let’s make it happen.”