Jews Cautious On Reparations For Blacks 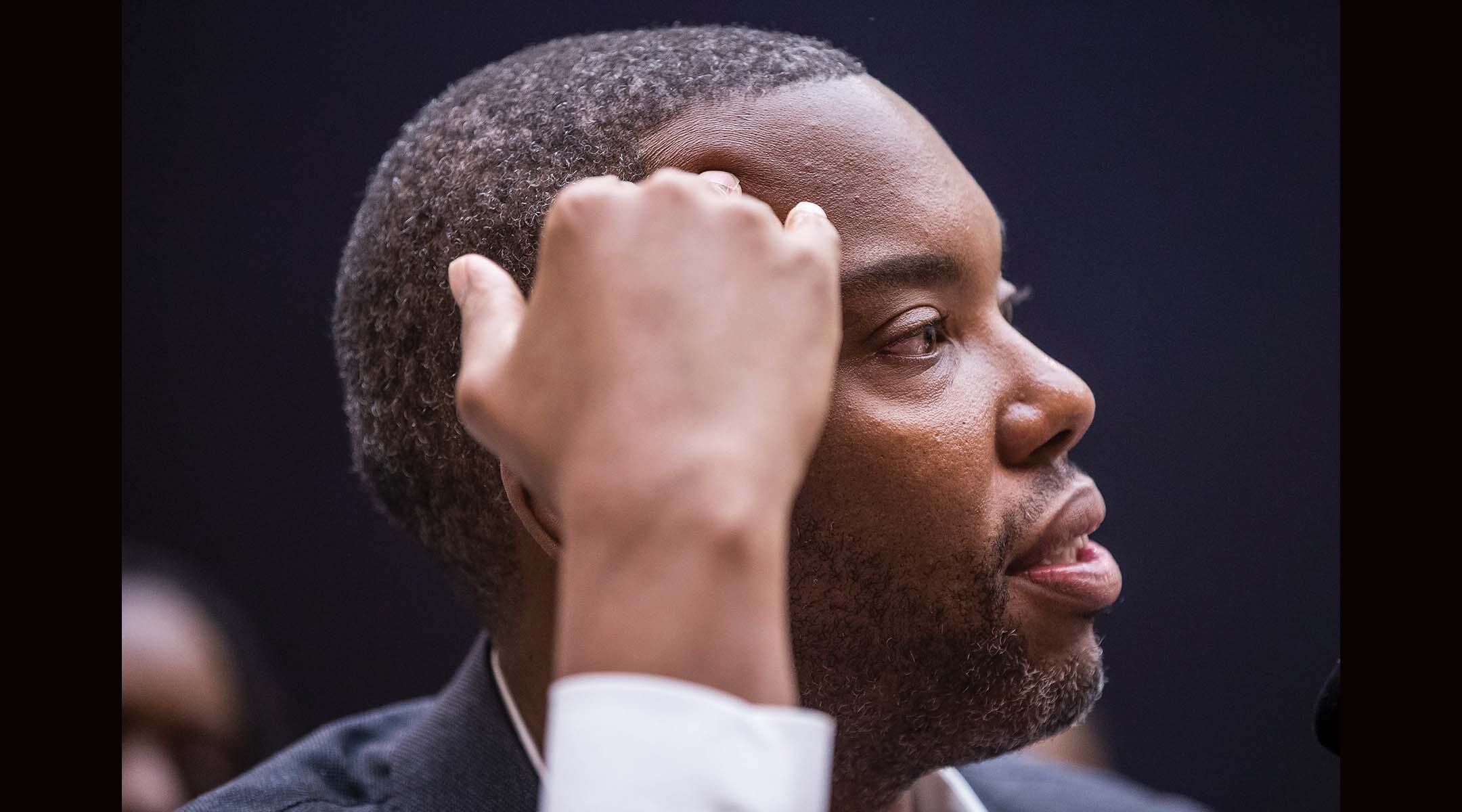 One of the hottest, and thorniest, issues to emerge in the early stage of the 2020 presidential election — reparations, payments to the descendants of slaves — seems to have an obvious Jewish connection. Jewish faith (repeated reminders in the Torah that Jews were slaves in Egypt) and Jewish fate (post-Holocaust reparations made by the German government) would point to a natural affinity between Jews and blacks on this topic.

But the Jewish community seems to be divided on a complex issue that lies at the intersection of race, justice, income inequality and national economics.

Democratic candidates’ opinions have ranged between outright support to skepticism about the proposal’s economic viability. Many proponents of such reparations cite as precedent the payments — some $70 billion to date, according to estimates — that Germany has made to the State of Israel, and to individual Holocaust survivors in several countries in the decades since 1953.

Yet a groundswell of backing in the Jewish community for reparations to slaves’ descendants appears not to have developed. And leaders of the current reparations campaign do not appear to have called on persons familiar with the German Wiedergutmachung (literally, making good again) payments for advice.

While the Jewish community, on the whole, has expressed respect for the payments that the German government, banks, insurance companies and other firms have made to Jewish recipients, sometimes after intense public pressure, prominent Jewish organizations and thought leaders are treading carefully on the subject of reparations for African-Americans, as they have on related social issues like affirmative action.

During the start of this election cycle, the national conversation on this topic was spurred by a number of factors: a call for reparations made by longshot Democratic (and Jewish) candidate Marianne Williamson; an influential 2014 article in The Atlantic by author Ta-Nehisi Coates on “The Case for Reparations”; the reintroduction into the House of Representatives of a bill that would establish “a commission to study and consider a national apology and proposal for reparations for the institution of slavery”; and a House hearing on the bill.

“Apologies are a necessary first step, but they alone cannot solve the present iniquities born of our nation’s original sin: slavery,” said Rep. Steve Cohen, a co-sponsor of the House bill who in 2007 and 2008 introduced a resolution officially apologizing for slavery and Jim Crow.

“Reparations can be a contentious issue, but it will be impossible for us to close the racial wealth gap if we aren’t willing to acknowledge the source of this problem or explore the full range of possible solutions.”

Problems raised by opponents of widescale reparations include the difficulty of determining who is descended from slaves, as well as the financial burden on the U.S. treasury of multi-billion-dollar payments.

“These aren’t simply technical issues — these are fundamental, practical issues that I deem likely to be insurmountable,” said Kenneth Feinberg, an attorney specializing in mediation and alternative dispute resolution, who served as special master of the U.S. government’s September 11 Victim Compensation Fund.

“How do you prove eligibility? How do you calculate [the amount of] the award?” Feinberg asked. He said he favors “some sort of social programs … public policies designed to give a special boost to the African-American community.”

On the other hand, several prominent rabbis have supported reparations in sermons and essays. Rabbi Sharon Brous, founder of the Los Angeles-based IKAR congregation, wrote in The Los Angeles Times that “Paying reparations to African Americans would not heal generations of trauma, nor would it erase systemic racial injustices. But it would offer some financial redress. And most significantly, it would start a reckoning that our country desperately needs.”

Rabbi Shmuly Yanklowitz, founder of the Uri L’Tzedek social justice organization, wrote in an online essay that, “In Jewish religious and philosophical thought, there is a framework that addresses the concept of not being excused from past debts. Reparations are not punitive; they’re restorative.” And Rabbi Aryeh Bernstein, educational consultant for the Jewish Council on Urban Affairs, wrote in an online essay, “The Torah Case for Reparations,” that, “The concept of reparations is remarkably basic and intuitive: when you steal, you must make restitution.”

Several Jewish supporters of reparations pointed to the Egyptian riches that the departing Hebrew slaves received when their exodus from the land of slavery began, the Torah prohibition against sending away a slave emptyhanded and the obligation to make financial restitution that Maimonides lists as a requirement for repentance.

Stuart Eizenstat, who negotiated major agreements with Switzerland, Germany, Austria, France and other European countries on restitution of property and payment for slave and forced laborers, said it is a mistake to conflate WWII reparations to the proposed payments to slave descendants.

“The difference [between the two cases],” he told The Jewish Week, is that “we have difficulty establishing the lineage [of contemporary African-Americans] to a particular slave who lived in the South in the 19th century,” while the recipients of German reparations “were actually alive” in the decades after World War II.

That position was echoed by Thane Rosenbaum, an attorney and author who is the son of Holocaust survivors who received reparation payments.

Might Jewish reluctance to fully support for reparation payments to African-Americans harm relations between the two minority communities?

“That ship has sailed,” Rosenbaum said. In other words, black-Jewish relations have become increasingly frayed since the high point of wide Jewish support for the civil rights movement in the 1950s and 1960s.

The Anti-Defamation League has taken no official position on reparations. The Conference of Jewish Material Claims against Germany (aka The Claims Conference), which has served as the Jewish community’s lead negotiator over reparation payments, said in a statement that “While this is an important and timely discussion, it falls outside the scope of the Claims Conference.” The U.S. Holocaust Memorial Museum, while declining to comment directly on the subject, offered a recent statement, on the context of comparisons between wartime concentration camps and the treatment of illegal aliens in this country, that the museum “unequivocally rejects efforts to create analogies between the Holocaust and other events.”

“The bigger [Jewish] organizations have to go through more process” of deliberation and consultation before deciding on a policy about reparations, said Rabbi Jonah Pesner, director of the Religious Action Center of Reform Judaism, which has appointed a task force to articulate the movement’s “formal policy.”

Rabbi Pesner declined to speculate whether the RAC, which typically takes liberal stands on social policy issues, will endorse reparations. He added, “we take this issue very seriously. Racism is a priority for us.”

“It’s unfortunate that large organizations are taking a pass,” said Rabbi Sandra Lawson, an educator and chaplain at Elon University in Elon, N.C. “We should find way to [recognize] our original sin. It’s no longer just a left issue.”

Rabbi Lawson, who is African-American, said she, like most of the black community, is in favor of reparations as part of a larger effort to erase the national legacy of slavery. She said her school has appointed a commission to study the role that slavery played in the institution’s history.

Rabbi Lev Meirowitz Nelson, director of rabbinic training at T’ruah: The Rabbinic Call for Human Rights, who spearheads T’ruah’s racial justice activities, said his organization “welcomes the discussion of reparations” and is sympathetic to the arguments for them, but has taken no official position “yet.” “When you do a wrong, you have an obligation to rectify it. You owe compensation for whatever damage you caused,” Rabbi Rabbi Meirowitz Nelson said.

What effect will discussion about reparations have on black-Jewish relations?