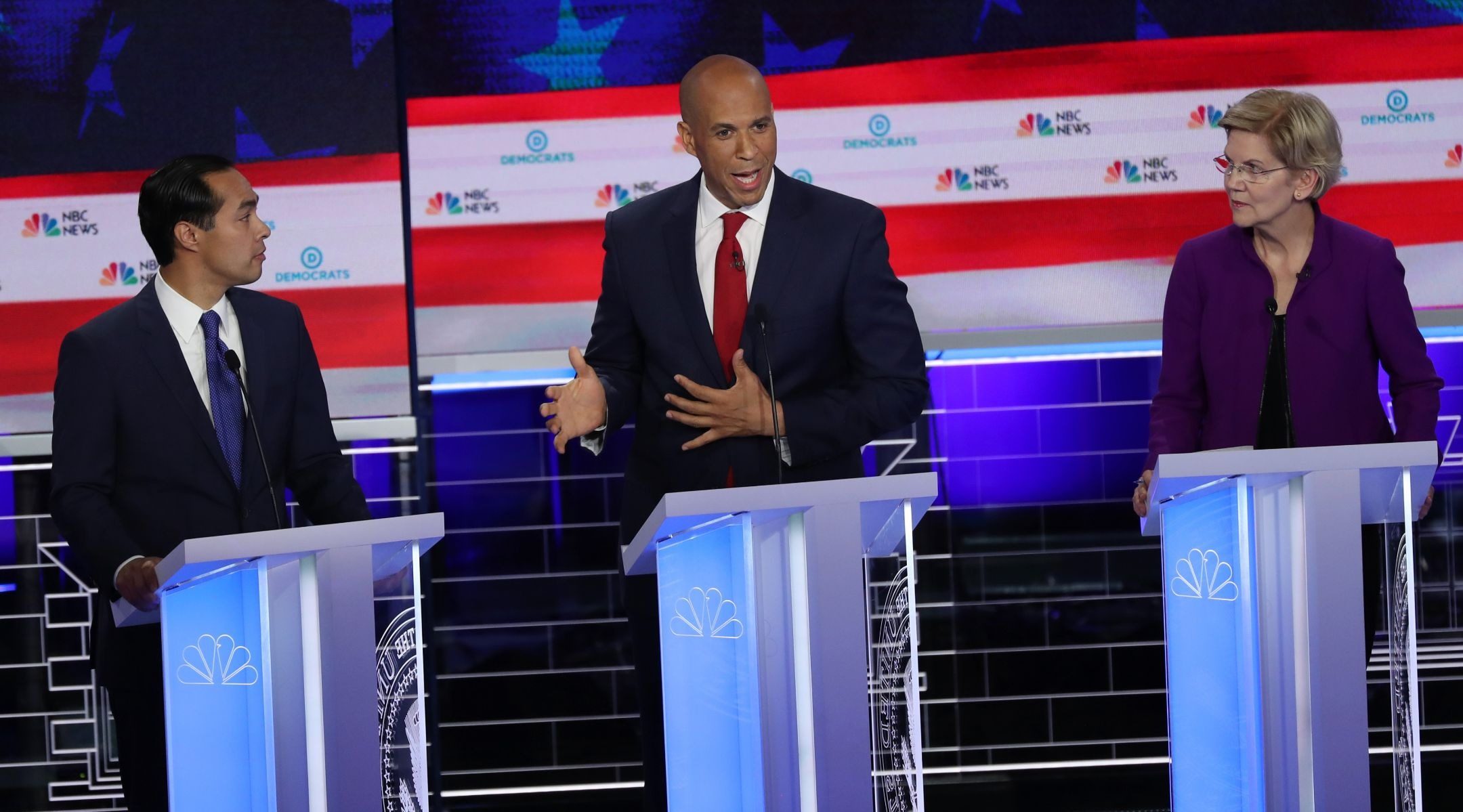 WASHINGTON (JTA) — Sen. Cory Booker, D-N.J., was alone among the 10 Democratic presidential candidates at the first debate not to commit to rejoining the Iran nuclear deal.

Moderators at the debate Wednesday evening in Miami asked the candidates whether they would rejoin the deal President Donald Trump abandoned a year ago. It swapped sanctions relief for a rollback of Iran’s nuclear program.

Booker was the only one not to raise his hand.

Moderator Savannah Guthrie framed the question by noting the recent escalation between the United States and Iran in the Strait of Hormuz, through which transits 40 percent of the world’s oil. Trump came close last week to ordering a strike on Iran after an unmanned American drone was shut down.

Booker nevertheless said Trump was wrong to pull out of the deal, which made Iran’s nuclear program more transparent.

“Donald Trump is marching us to a far more dangerous situation,” Booker said.

But he said he would not automatically reenter it, and would instead negotiate for a better deal.

“I’m not going to stand up on a primary stage and announce that I am unilaterally or de facto go back into the deal,” Booker told CNN after the debate.

Booker voted for the deal in 2015, alienating some of his backers in the pro-Israel community.

Klobuchar and Gabbard, the only others who were permitted to speak on the issue, also said they would seek better terms. Klobuchar said she would seek longer “sunset” provisions to the deal — meaning longer periods of time during which Iran is not allowed to get back to uranium enrichment. Gabbard said she would seek to include missile development into the deal.

Later the same evening, the candidates were asked to name the greatest geopolitical challenge — most named China. Only Klobuchar mentioned the Middle East.

The only significant foreign policy difference that emerged among the candidates came when they were asked if the United States should intervene in a genocide if American lives were not threatened.

Beto O’Rourke was the first to be asked to take the question, and he said that he believed America should intervene, but only as part of an alliance.

“That action should always be undertaken with allies and partners and friends,” he said.

De Blasio rebuked O’Rourke, saying any president should seek the approval of Congress.

“We should be ready, congressman, to intervene, god forbid if there is a genocide but not without congressional approval,” he said.

Moderators then pivoted to Ryan, asking him about whether the United States should remain in Afghanistan, noting that two U.S. soldiers were killed in that country on Wednesday. Ryan said Afghanistan posed a continued threat, prompting a rebuke from Gabbard, a veteran whose most distinguishing policy is her isolationism.

“Is that what you will tell the parents of those two soldiers killed in Afghanistan, ‘We have to be engaged’?” she said. “As a soldier, I have to tell you that’s unacceptable.”