Alumni of these Jewish summer camps are making aliyah in droves 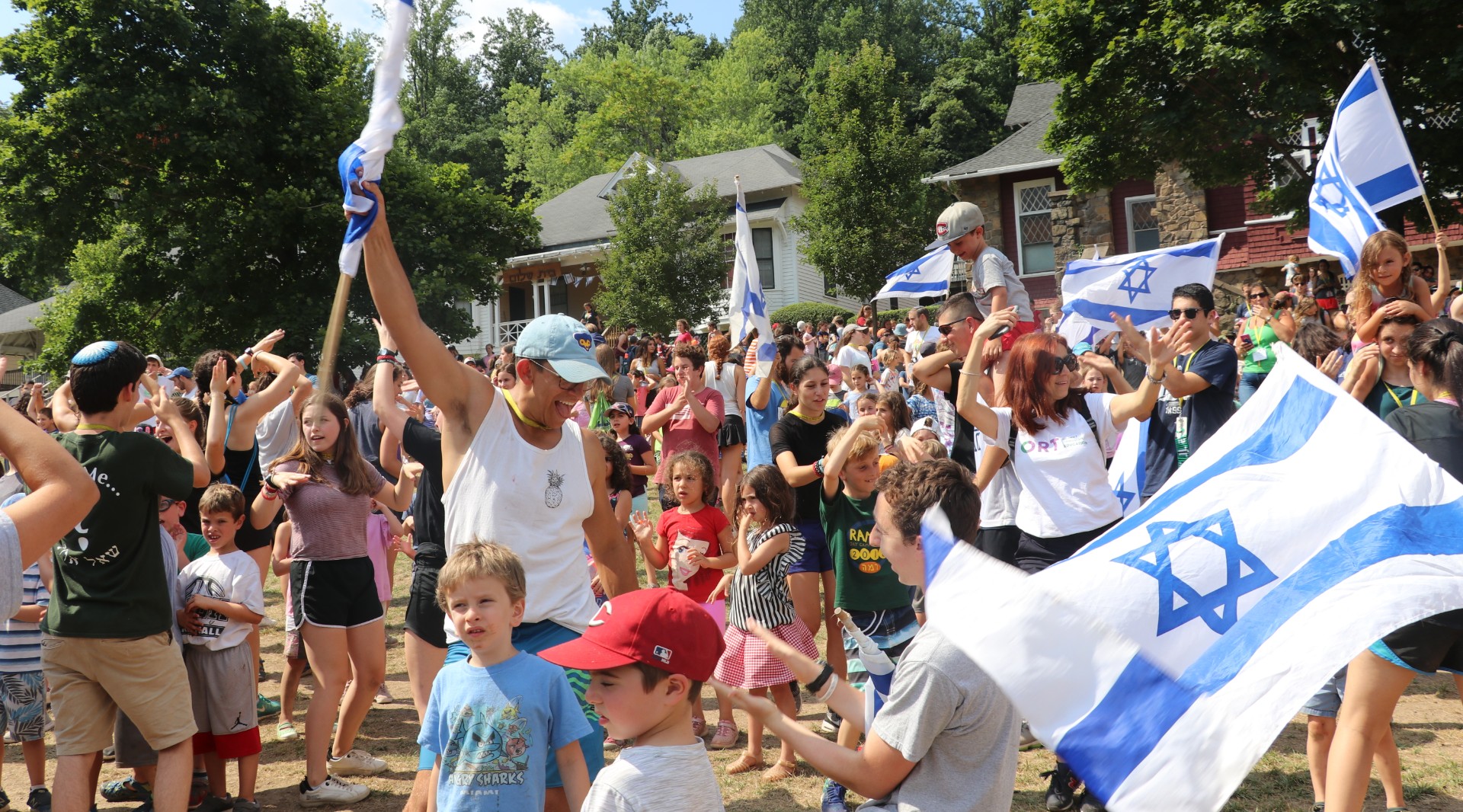 On the last Friday of the season at Camp Ramah Nyack, anyone spending the next year in Israel is called up and invited to dance with the Israeli staffers in a Zionist celebration. (Courtesy of Ramah Nyack)
Advertisement

Every Friday, the staff and campers at Camp Ramah Nyack gather for a ceremony called Shishi Al Hamigrash – Hebrew for “Friday on the field.”

The entire camp community — some 1,100 people in all — assembles on an enormous field in the center of the camp about 30 miles north of New York City for a spirited session of Israeli dancing. When it’s over, the Israeli emissaries who serve as staffers each summer line up at the flagpole holding Israeli flags and singing “Hatikvah,” the Israeli national anthem.

In August, on the last Friday of camp, anyone spending the next year in Israel is called up, and the Israeli staffers dance around them, welcoming them into their circle.

This year, Sammy Fishman will be among them. A fourth-year counselor at the Jewish day camp, Fishman will be moving to Israel on Nefesh B’Nefesh’s charter aliyah flight in August and soon after be drafted in the Israeli army.

Fishman’s inspiration for such a momentous life choice comes from many places, including the influence of an older brother who made aliyah – the Hebrew term for immigrating to Israel. But the intensity of those Friday afternoons at camp played a significant role.

“I felt so emotional about singing a song in a language that is not my first language and with people I didn’t know but just felt deep down I connect with and have so much in common with,” said Fishman, 19. “I knew I didn’t feel the same way singing the American national anthem.”

Jewish summer camps long have been recognized as potent venues for building Jewish identity. Studies suggest that Jewish camp alumni rate the importance of Judaism in their lives higher than the broader population and exhibit higher rates of Jewish engagement and participation in Jewish rituals.

But camps are also powerful incubators of love of Israel, and a small but significant number of camp alumni each year choose to take that love to its fullest expression by moving to Israel.

“Not so surprisingly, camp is a bastion for aliyah inasmuch as it is a Jewishly constructed utopia not so dissimilar from Israel,” said Rabbi Avi Orlow, the vice president of innovation and education at the Foundation for Jewish Camp. “Many of them were started around the same time as Israel was established. In many ways, they are projecting the same ideas.”

No hard data exists on how many American immigrants to Israel are Jewish summer camp alumni. But Nefesh B’Nefesh, a nonprofit that facilitates the process of moving to Israel in partnership with Israel’s Ministry of Aliyah and Integration, the Jewish Agency for Israel, Keren Kayemeth LeIsrael and the Jewish National Fund-USA, says about 10 percent of immigrants under 40 who move to Israel with its assistance cite Ramah or Moshava camps as impacting their decision.

No one in the camping world is surprised by the assertion. Invariably they point to the presence of significant numbers of Israeli staff at many North American Jewish summer camps, which creates lasting relationships between Israelis and American kids. Most camps also include some kind of Israel programming. Some encourage Hebrew language familiarity by posting signs and making public announcements in Hebrew. A handful are also explicit about promoting aliyah.

“Connection to Israel is nurtured in three places — the home, school and synagogue — and increasingly summer camp,” said Marc Rosenberg, the director of the pre-aliyah department at Nefesh B’Nefesh and himself an alumnus of a Ramah camp in Pennsylvania. “Camp has an Israel feeling to it. Being Jewish is just normal there.”

At Camp Moshava in Honesdale, Pennsylvania — an overnight camp affiliated with the religious Zionist youth movement Bnei Akiva — nearly a quarter of the staff comes from Israel each year and nearly all its senior staff have made aliyah. Many of them are Moshava alumni themselves.

“The personal example is without a doubt the best,” said Alan Silverman, who has led Moshava for 34 years.

Silverman would know. The camp’s current assistant director, Chaim Livne, was his counselor when Silverman was a Moshava camper. Both men now live in Israel.

Silverman won’t hazard a guess as to how many Moshava alumni move to Israel each year, but he has a handy proxy for estimating: The camp has a yearly tradition of bequeathing Moshava backpacks to members of the camp community who are Israel-bound, and Silverman orders anywhere from 50 to 100 each year.

“Aliyah is a central core value of ours,” Silverman said. “We know that not everyone is going to make aliyah because it’s not realistic, but that is certainly a primary goal that we educate towards in lots of different ways.”

One of those ways is through an educational theme related to Israel that’s integrated broadly into the camp experience. This year’s theme is the hiking path known as the Israel Trail, which traverses the country from north to south. The curriculum affords campers the chance to learn about Israel’s diverse geography and famous historical figures associated with different regions of the country.

At Camp Yavneh, a nondenominational camp in Northwood, New Hampshire, a program called Kef B’ivrit (Hebrew for “fun in Hebrew”) ensures that all campers spend at least a portion of every day immersed in Hebrew. The camp also offers a seminar to prepare its counselors-in-training for dealing with the Israel issue on college campuses. Like many Jewish camps, it offers a summer program in Israel for campers who have completed 11th grade.

“I think there’s an inextricable bond between Yavneh and Israel, and we feel very connected as a community to Israel,” said Bil Zarch, Yavneh’s executive director. “Anything we can do to ensure a strong future for our Jewish homeland, that’s what we are going to do.”

Summer camp networks also play a role after the Israel move. Vanessa Better, 23, a San Diego native and 13-summer veteran of Camp Ramah in Ojai, California, is moving to Israel in November. Even as a study-abroad student at the University of Haifa, she found herself embraced by the families of Israeli friends she made through Ramah.

“The offers were always pouring in, even from people I wasn’t so close with — to such an extent that I could accept every offer and be set for years for Shabbatot,” Better said. “I never would have met those people had it not been for Camp Ramah.”