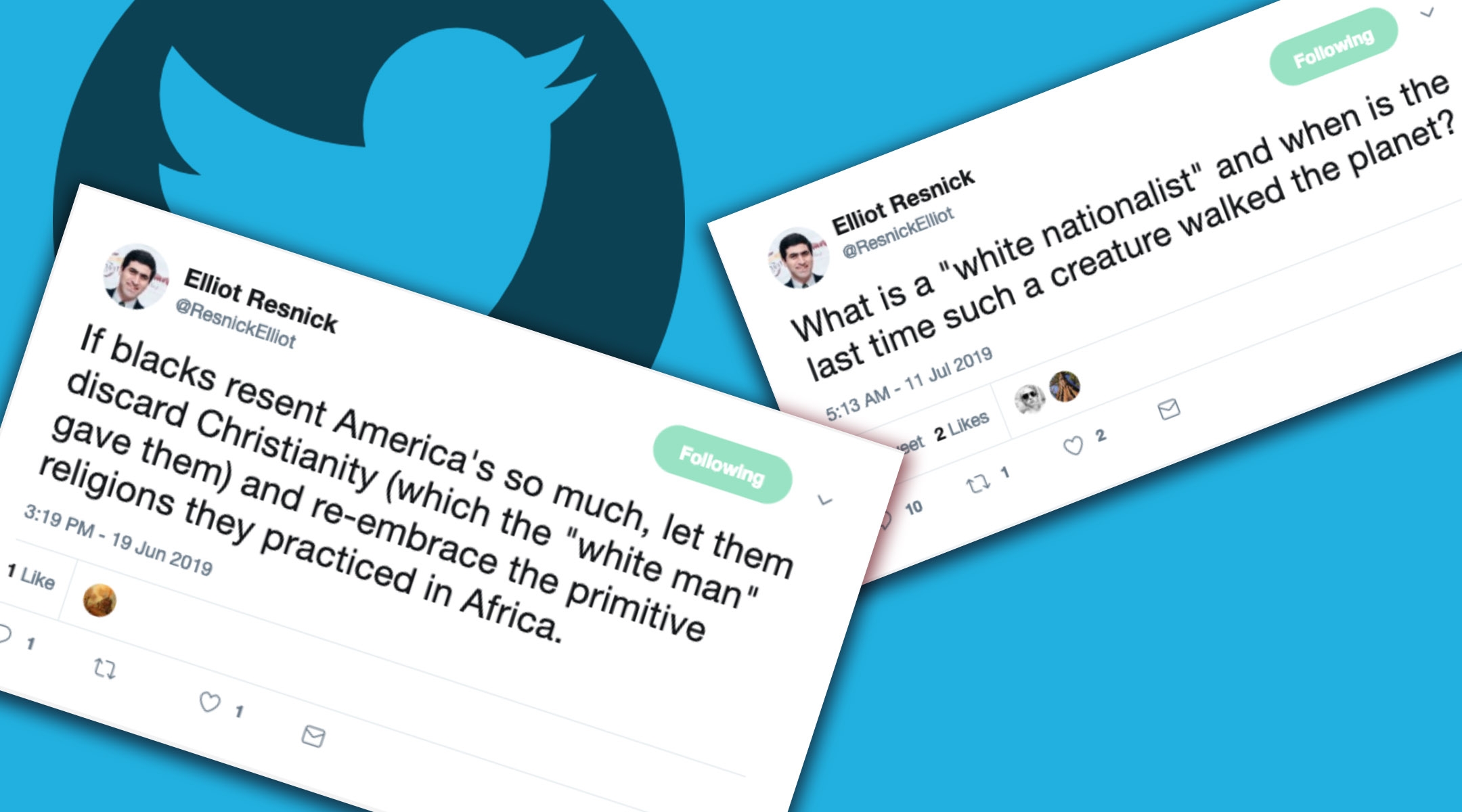 Elliot Resnick, the chief editor of The Jewish Press, has called African religions "primitive" and questioned the existence of white nationalists. (Collage by Laura E. Adkins/Screenshots from Twitter)
Advertisement

NEW YORK (JTA) — The chief editor of The Jewish Press, an Orthodox newspaper, has repeatedly used his Twitter account to make racial comments and excoriate the gay rights movement for glorifying what he calls sinful behavior.

Elliot Resnick’s comments were the focus Saturday of a piece published on Medium by Chaim Levin, an advocate for LGBTQ acceptance in the Orthodox community. Resnick has in social media posts over the last year called African religions “primitive” and the gay rights movement “evil.” He also questioned the existence of white supremacists and asked how an adult having sexual relations with a teenager constitutes assault.

“If blacks resent America’s (sic) so much, let them discard Christianity (which the ‘white man’ gave them) and re-embrace the primitive religions they practiced in Africa,” Resnick wrote last month.

“Can someone give me a coherent reason why blackface is racist?” he asked in a tweet in February.

In another tweet, the context of which is unclear, Resnick asked: “How is it assault to commit a consensual immoral act with a 17-year-old? The notion that a 17-year-old in this century is an innocent child is laughable.”

The Jewish Press’ publisher told the Jewish Telegraphic Agency that its editor’s tweets were “unacceptable.”

Resnick defended his tweets in an email to JTA on Monday.

“Calling my tweets ‘vile’ is a smear tactic designed to avoid addressing my Facebook post on the Torah’s views on homosexuality,” he wrote. “Chaim Levin is a radical activist determined to push immoral beliefs down the throats of society and will trample on anyone who stands in his way.”

When asked about his comment on African religions, Resnick said, “According to the Torah, the closer a religion is to pure monotheism, the more advanced it is.” 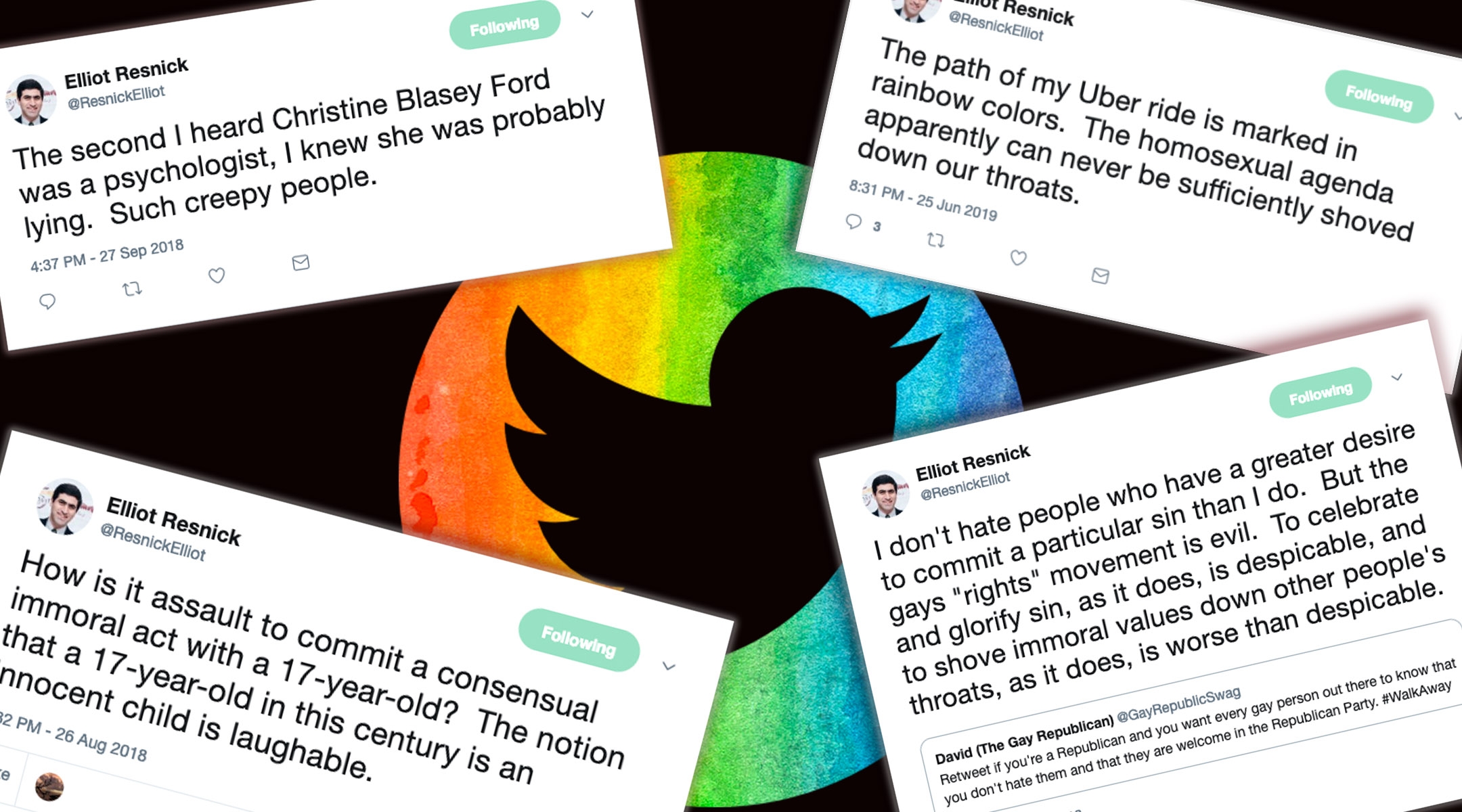 The Jewish Press said it would not take action in response to Resnick’s tweets. (Collage by Laura E. Adkins/Screenshots from Twitter)

He defended his tweet about relations between an adult and a minor by writing, “A 17-year-old is an adult according to the Torah.”

The Jewish Press describes itself as “the largest independent weekly Jewish newspaper in the United States.” It has a print and online circulation of 95,000, according to its publisher, Naomi Mauer.

The Brooklyn-based paper describes itself as championing “Torah values and ideals from a centrist or Modern Orthodox perspective.” The Jewish Press was previously a JTA client although it ended its subscription in December 2014.

Mauer said that Resnick, who has been serving as chief editor since early 2018, had written the posts in his personal capacity and that they did not represent the views of the publication.

Mauer said she told Resnick that the tweets were “unacceptable,” and he in turn said he would no longer share such posts. The paper is not taking any further action, Mauer said.

Levin, the activist, and Resnick have history. Levin said the two first met when he was a camper and Resnick was a counselor at Camp Gan Israel, a summer camp affiliated with the Chabad Lubavitch movement in Parksville, New York.

Years later, Resnick found out about Levin’s sexuality and wrote an article in The Jewish Press in 2011 attacking him for speaking about his sexuality in a video.

Resnick’s article did not mention Levin by name but the following year Levin penned a response in The Press in which he acknowledged that the article had been about him.

Levin told JTA that he has been aware of Resnick’s social media posts for years but that he was moved to take action after The Jewish Press published an article last week which criticized participants in New York’s Gay Pride parade, saying people who engage in homosexual relations are giving in to their desires like animals.

“He’s not a random person on Twitter, he’s the chief editor of a very big newspaper, a newspaper that’s in my parents house every weekend without exception,” Levin said. “I think it matters and I think the world should at least be aware that these are statements he is making.”