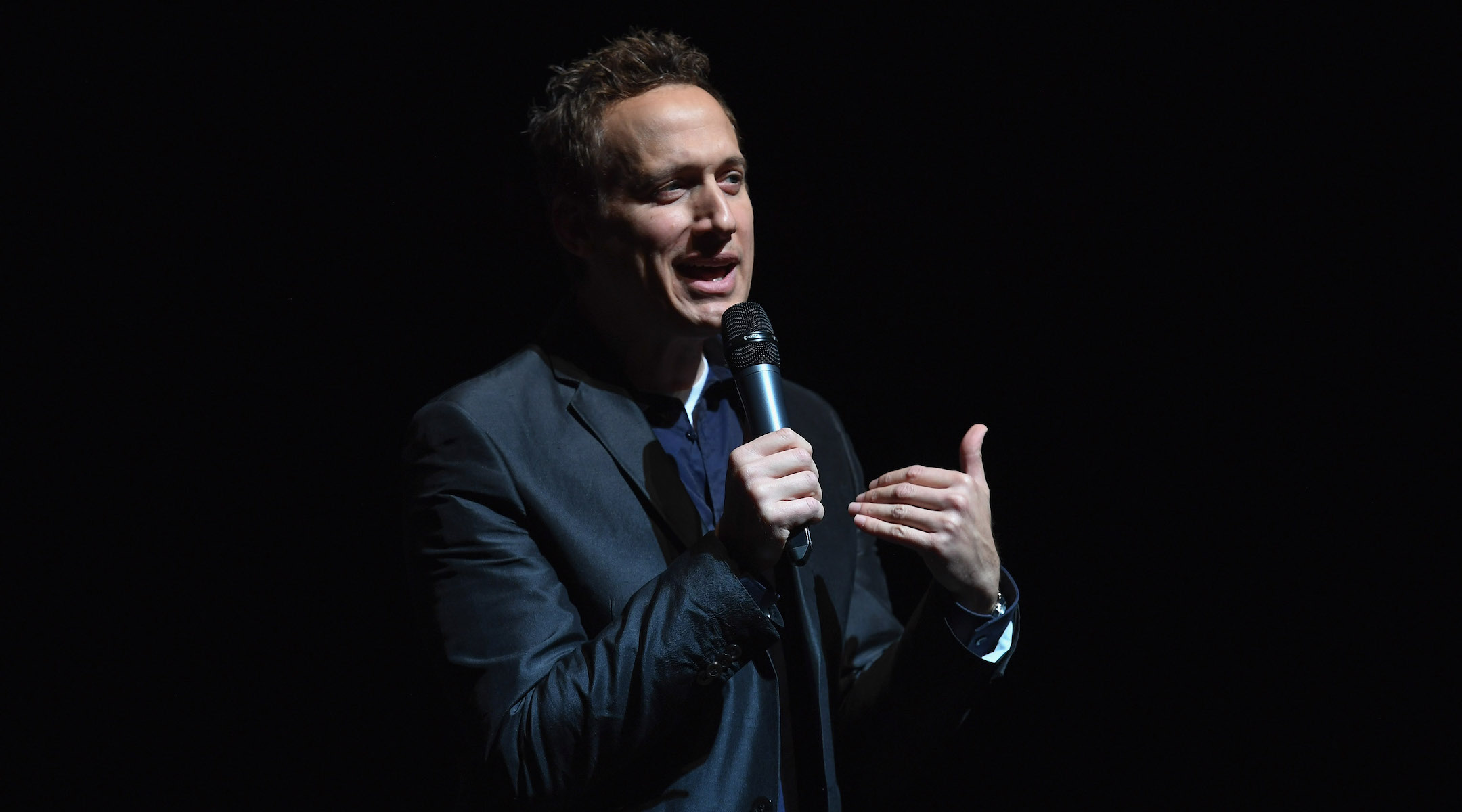 Like the one told about the assassination of Czar Alexander of Russia in 1881, when a government official approaches a rabbi and growls, “I assume you know who was behind it.”

The rabbi replies, “I have no idea, but I’m sure the government will blame the Jews and the chimney sweeps.”

Confused, the official asks, “Why the chimney sweeps?”

“Why the Jews?” the rabbi responds.

While philosophers and historians have long debated the persistence of anti-Jewish stereotypes, Jewish comedians have been trying to undermine their peddlers with laughs.

One hilarious and revealing example comes courtesy of Elon Gold, an in-demand comic with a Netflix special and regular gigs on the late night talk shows.

“We Jews are just like everyone else,” Gold said last year on “The Late Late Show With James Corden.” “We all have the three basic human needs: sex, money and food. We just want them in a different order.”

As the audience laughed knowingly, Gold continued, “For the rest of the world, it’s sex, money and food, in that order. But for us, what’s No. 1?” — at which point the entire crowd yelled “Money!”

Without missing a beat, Gold exclaimed, “How DARE you?!” in mock horror, adding sarcastically, “I like how that was in unison, without any reservation or hesitation.”

“Comedians talk about what bothers them, and this [anti-Semitism] really bothers me,” Gold told me ahead of his four shows at this year’s Just for Laughs festival here, which starts on July 22. “It’s like what Mel Brooks said about his ‘Springtime for Hitler’: Humor is my greatest weapon. Our revenge is with jokes, and not just against the Nazis of old, but sadly current-day neo-Nazis. The only way Modi and I can fight them is by mocking them and exposing the ignorance of their bigotry.”

“Modi” is the Israeli-born comedian and actor Mordechai Rosenfeld, who will be Gold’s first-ever comedy partner in Montreal.

“We’ve never been a team before; we’re not the Jewish Abbott and Costello,” Gold said, “but when we get together, something magical happens.” The show, titled “Elon Gold and Modi: Two for One,” is “the epitome of everything I’ve done in the past in Montreal, but it’s now ‘Jew squared.’ It’s so much fun.” 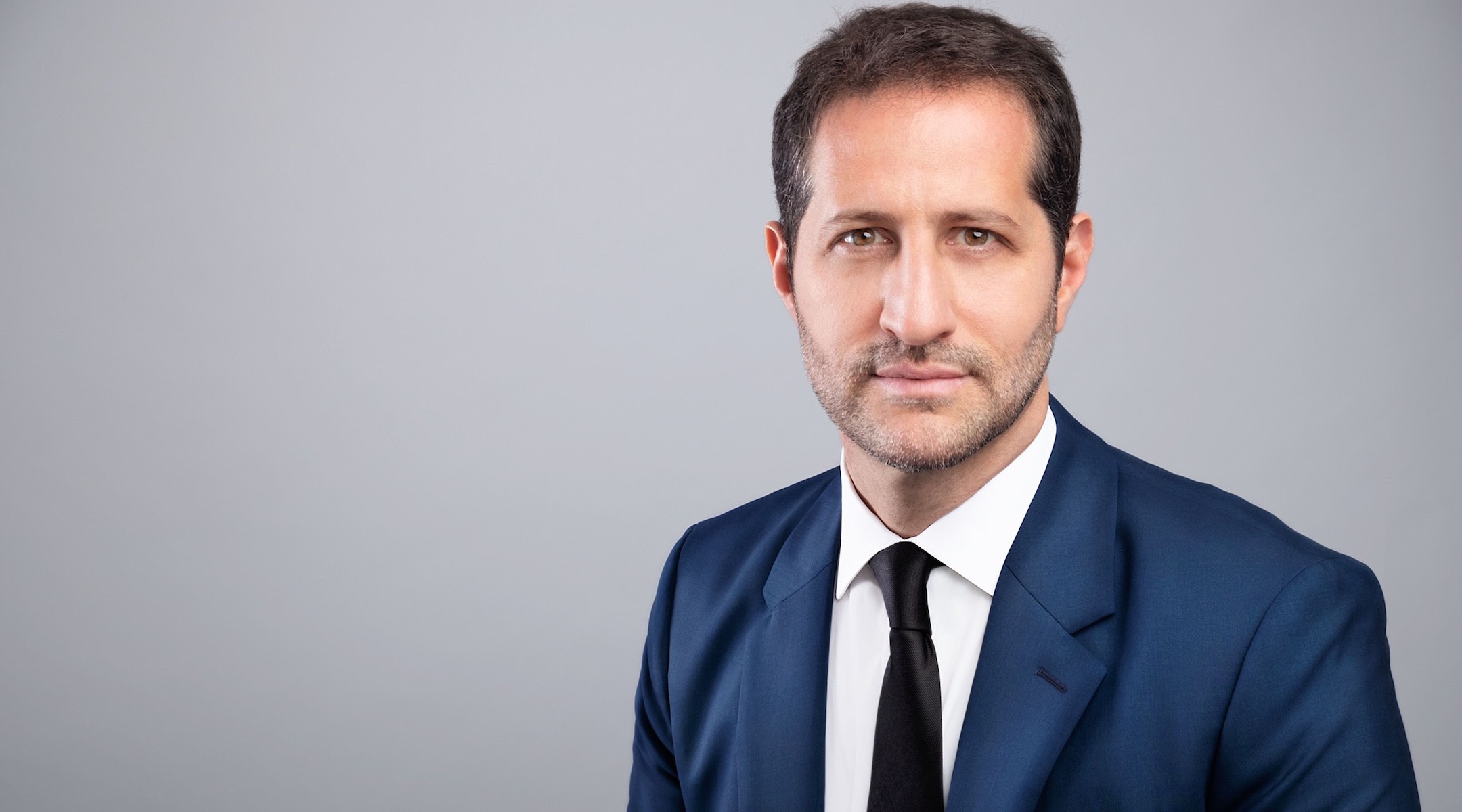 Modi Rosenfeld is a comedian and cantor. (Courtesy of Just for Laughs)

This will be Gold’s 13th time at the prestigious event. So what can audiences expect from his bar mitzvah appearance?

“A lot of leyning (Torah reading),” he said with a smile.

Gold, a graduate of Modern Orthodox day schools and Yeshiva University high school, has been taking on Jew-hatred for years, most notably in a 2017 set he called “Pro-Semite.” In these days of synagogue massacres and growing global anti-Semitism, he said, “we talk about it even more.”

Modi agrees, noting that in his routine, “I ask, why does the world hate us? We’re the only religion not looking to recruit people. Every other religion’s main goal is that you join. We’re the opposite: Our main goal is, just leave us alone!”

Born in Israel, as were both his parents, Modi was 7 when the family moved to New York’s Long Island. Aside from his native Hebrew, the 49-year-old speaks perfect Yiddish, a consequence of conversing in “mamaloshen” with his Russian-Polish grandparents.

“Also, in yeshiva, I used to love to read the Lubavitcher rebbe’s ‘sichos,’ his teachings in Yiddish, and that helped me learn the language,” Modi said.

Modi, who studied at Yeshiva University’s Belz School of Music, became a cantor at Manhattan’s Community Synagogue, where he still conducts Kol Nidre services and davens on the occasional Shabbat.

“I never thought I could be out-Jewed,” Gold said, “but Modi’s the ultimate Jew! We have so much fun rehearsing; he shpritzes jokes like one of the old Catskills comedians.”

Modi also had a career as a Merrill Lynch investment banker on Wall Street. That is until one open mic experience at a comedy club convinced him to put challah on the table by doing shtick rather than stocks.

Both men skillfully deal with the challenge of being funny in an often unfunny time.

“We see the Jew-hatred because we’re Jewish,” Modi said, “but there’s growing hatred and racism against blacks and immigrants; everyone’s feeling it. We focus on ours because it’s against us. I talk about how the whole world has always wanted to kill us. I reference the Holocaust, and survivors often come up to me afterwards and say, ‘it’s so good that you talk about it.'”

Can addressing anti-Semitism with humor, this age-old Hebraic coping mechanism, actually change attitudes? Gold is skeptical that finding the funny in Jew-hatred will alter anyone’s beliefs.

“But I think it can change awareness and perspectives,” he said, hopefully.

In his appearance on the Corden show, Gold cleverly followed up the audience’s clichéd response about Jews and money by both confirming and dispelling the stereotype.

That kind of humor, Modi points out, consists of “having fun with Jews, not making fun of them. When you leave my shows, you feel proud to be Jewish. Other comedians will talk about how Jews don’t play sports or whatever. That’s not my type of humor.”

As for getting laughs in an era when American Jews have been shot in shul, Modi concludes, “I know I’m doing the right thing. I have to keep making audiences happy and raise money for Jewish organizations that help.”

He said that Pittsburgh’s synagogue complex, where 11 worshippers were fatally shot in October, wants to do a gala fundraiser.

“They’re already asking for comedy,” Modi said. “You have to be able to get back on your feet and laugh.”