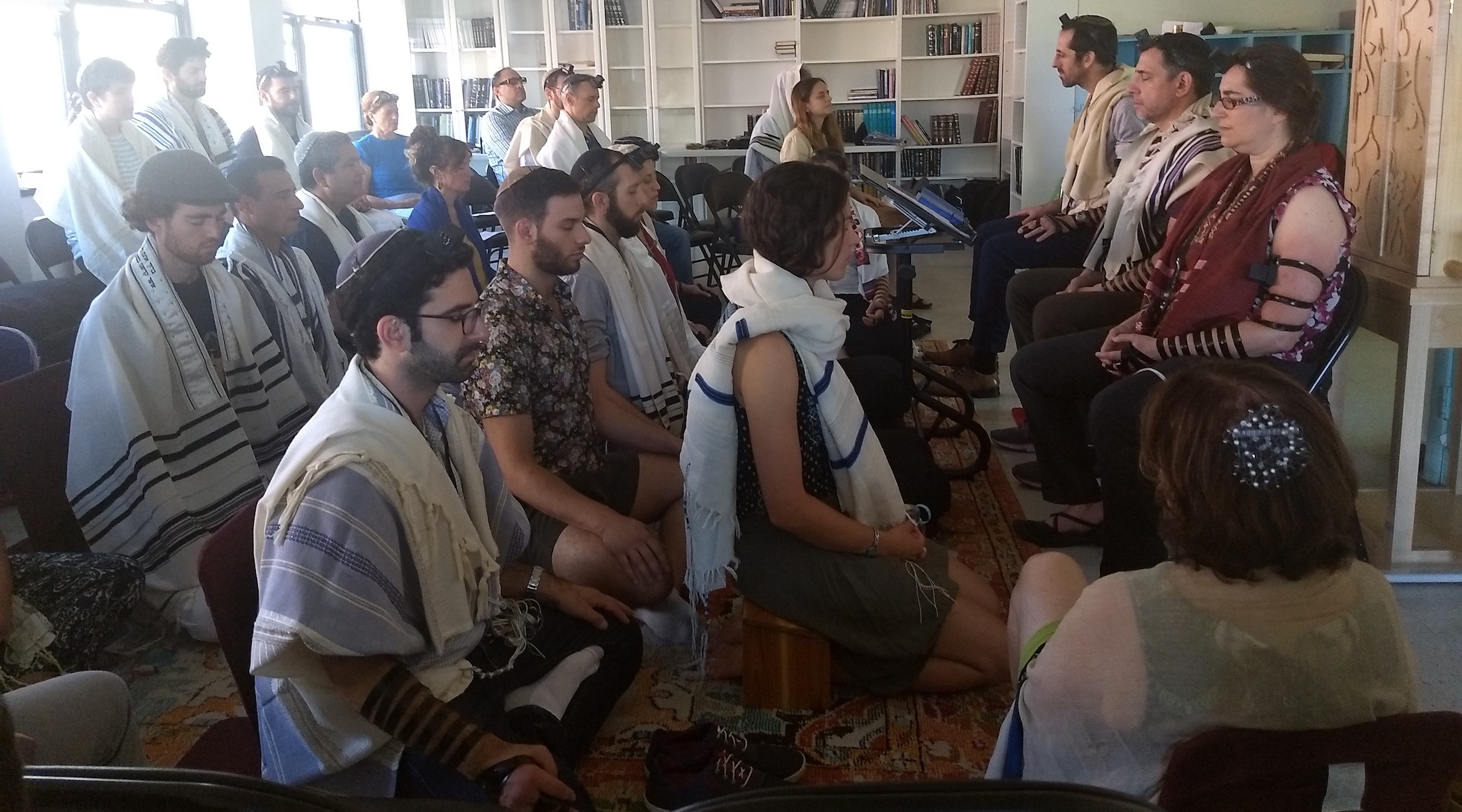 Students meditate as part of the morning prayer at Romemu Yeshiva in New York, July 16, 2019. The yeshiva combines intensive study of Jewish text with mindfulness and mysticism. (Ben Sales)
Advertisement

NEW YORK (JTA) — If you walked into Romemu Yeshiva on a weekday morning, you would be forgiven for thinking it’s an urban ashram.

Students sit on cushions, in rows, on a faded Persian rug, backs erect, legs crossed, eyes closed, hands resting loosely on their knees. Soft grins cross a few of their faces. Many are wearing prayer shawls. A few are wearing tefillin. The AC is turned to 65 degrees.

Usually these 20 or so students meditate silently for up to 45 minutes at the beginning of each day. On Tuesday, because they were hosting guests, meditation — or “sitting,” as they call it — was abbreviated to 10 minutes. Still, for Jews, 10 minutes of sitting silently feels like a long time.

In one way Romemu Yeshiva, launched by the Manhattan congregation of the same name, is the latest of several initiatives to provide an inclusive, egalitarian space for adults to study Jewish text at a high level. It has 22 students, mostly in their 20s and 30s. The yeshiva began meeting in June and will run until August.

Other schools of that kind — like Yeshivat Hadar, the Pardes Institute and Svara — generally emphasize the study of Talmud and Jewish law that has long dominated the yeshiva world. But Romemu Yeshiva is the vanguard of a larger project to infuse American Judaism with concepts traditionally considered Eastern, like meditation, mindfulness and mystical philosophy. It wants to show American Jews that those concepts are authentic to Judaism, even if they’ve been de-emphasized in favor of mainstream prayer and study.

“This yeshiva is the culmination of a revolution in the West of mindfulness and contemplative practice,” he said. “It’s not foreign to Jewish life. Endemic to Jewish spiritual work is intentionality, mindfulness, cultivating states of awareness and cultivating the kind of person who is full of love and compassion and those types of things.” 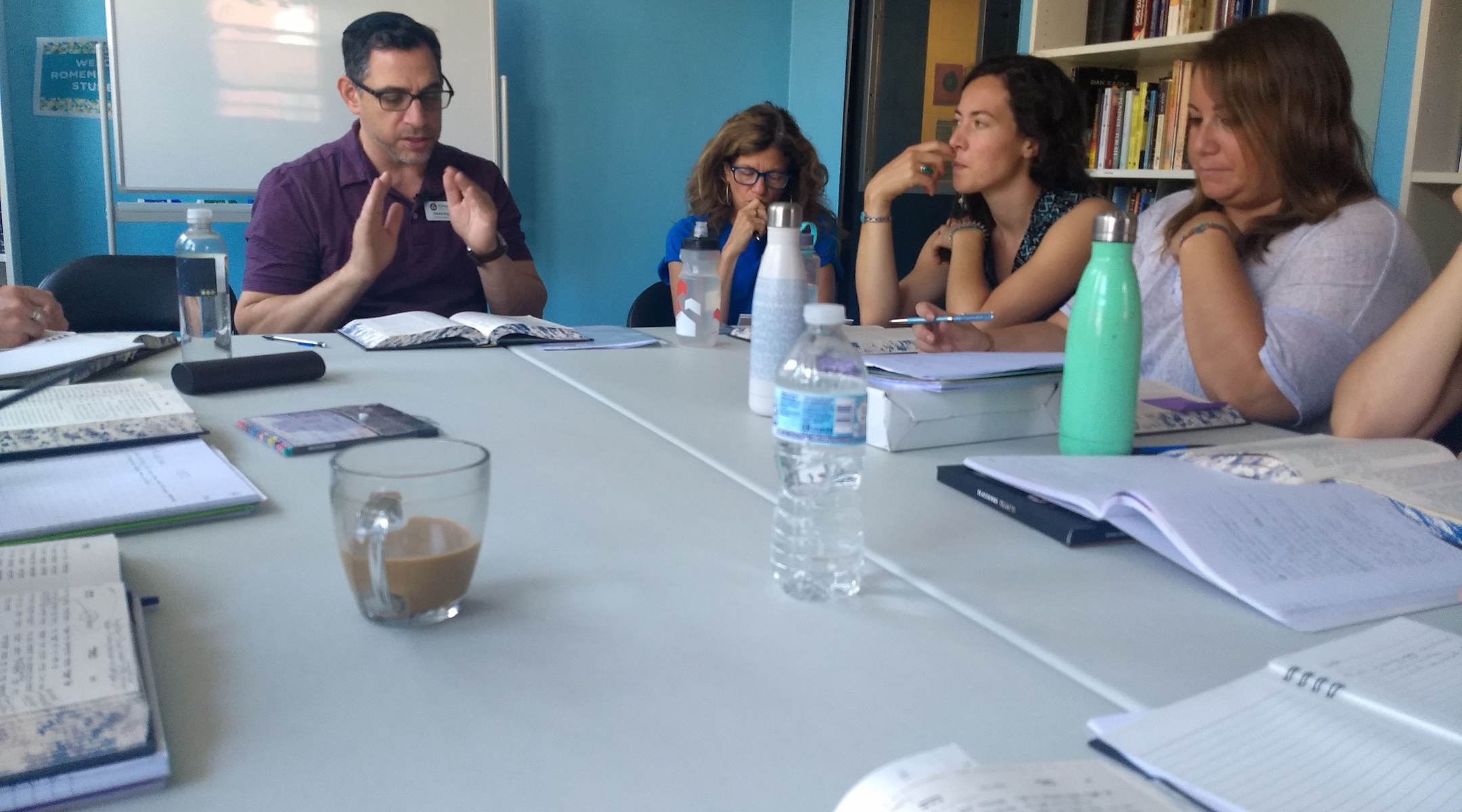 At most yeshivas, or advanced schools for adult Jewish study, prayer follows a nearly identical daily routine, with set liturgy that is mostly murmured semi-quietly, occasionally sung. Romemu turns that custom on its head.

The morning prayer consisted of a series of six chants — most of them a line or two from the prayer book repeated over and over rhythmically with rising volume and three-part harmonies. A rabbi introduced each chant with a series of softly spoken instructions, and each was followed by another minute or so of meditation.

But even that routine was broken. Before saying the Shema prayer, the group broke off into pairs to do a “gazing exercise” in which they stood opposite each other, made eye contact and said to each other, “You are made in the image of God” or “You are made in the image of Shechina,” the traditional Hebrew feminine form of God’s spirit. Some riffed on that.

The goal of integrating mindfulness and Judaism is not new.

The late Rabbi Aryeh Kaplan offered a traditional Jewish alternative to Eastern practices in his 1985 guide “Jewish Meditation.” The Jewish Renewal movement, founded in the 1970s by Rabbi Zalman Schachter-Shalomi, has the same ethos and counts Romemu as one of its congregations.

This yeshiva, however, aims for an expansion of Renewal’s mission to more mainstream spaces. Ingber envisions shorter-term seminars for Jewish clergy and other leaders of all denominations, as well as a greater range of classes to be offered to the public. The yeshiva already has weekly public events.

“It’s a kind of place where you can have this kind of amazing laboratory,” said Rabbi James Jacobson-Maisels, the head of the yeshiva. “You come together, you do intensive practice together, you create the kind of model for what Jewish life might look like. People want their religious lives to speak to their basic human needs.”

The yeshiva’s students do learn Jewish law and Talmud, which Romemu styles as “contemplative rabbinics.” But they also have time cut out for Kabbalah, or Jewish mysticism, and Hasidism. A class this week studied the Torah commentary of Menachem Nachum Twersky of Chernobyl, an 18th-century Hasidic rabbi.

“It was exciting to be able to do meditation in my own tradition to not step into someone else’s tradition as a guest,” said Sarah Hurwitz, a former speechwriter for Michelle Obama and now a student at Romemu. She says her favorite class is Hasidism because “it’s so infused with love, it’s so infused with joy, it’s so infused with this real yearning for connection with the divine. There’s a real sense of emotion behind it that can sometimes feel like it’s missing in Jewish spaces.” 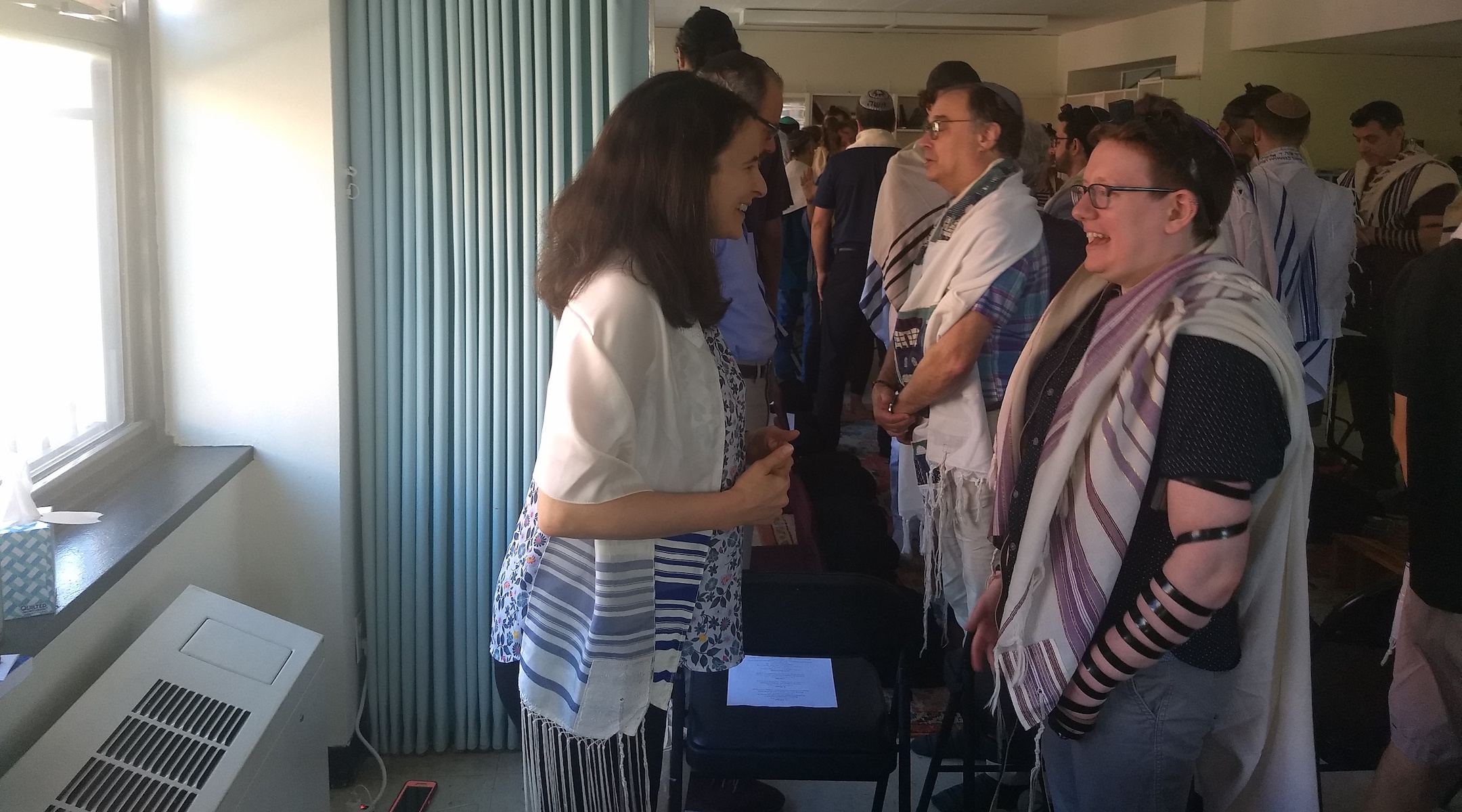 The curriculum also aims to merge study with spiritual practice. Before studying Jewish texts about loving God, students meditated one day on what it feels like to give and receive love from people in their lives. A teacher of qigong, a movement system similar to tai chi, is onsite. The students will hold a weekend silent retreat at the yeshiva this week.

“Parts of it feels radically different,” said Lily Solochek, a rabbinical student who began studying at the Conservative movement’s Jewish Theological Seminary and is now a student at the Reconstructionist Rabbinical College. They are at Romemu Yeshiva for the summer.

The yeshiva’s daily schedule is demanding, beginning at 7:30 a.m. and lasting as late as 9 p.m. Some students pay a tuition of up to $5,000, while others get a living stipend. Almost three hours in total are set aside for prayer, including an hour for the afternoon service after lunch — a kind of spiritual siesta. But Romemu’s faculty doesn’t expect the students to be able to sustain the yeshiva’s rigorous lifestyle when the program ends in August.

“We want them now to start to be able to translate and help other people see how this can be accessible to them as well,” Jacobson-Maisels said of the students. “To help people see, oh, this is a possibility. I can find a really deeply meaningful Judaism, a deep connection to my roots [that] makes me operate in this contemporary world in a way that feels much more open to me.”