Congress tackles the anti-Israel boycott, but bipartisanship is fleeting 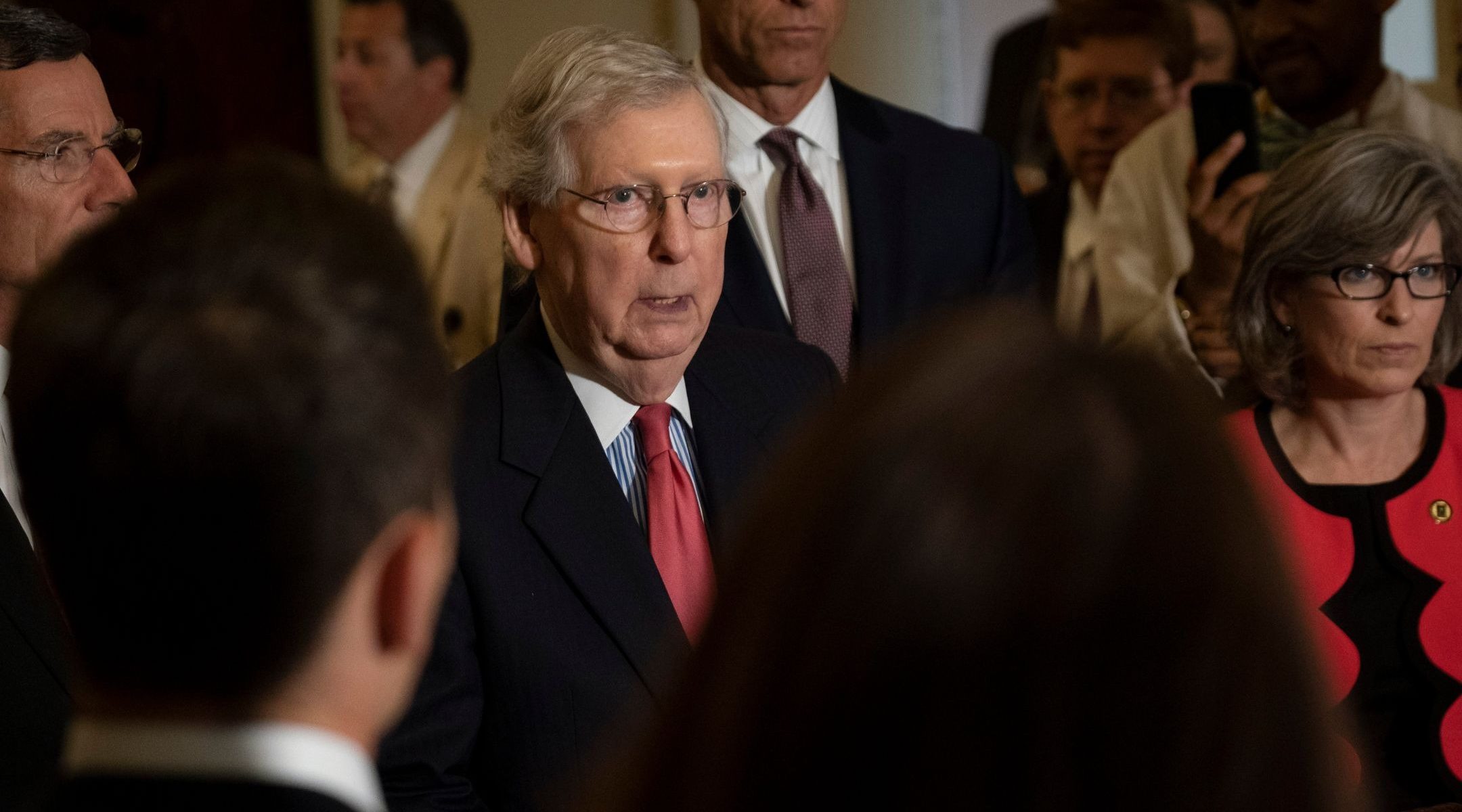 WASHINGTON (JTA) — On Wednesday, the Foreign Affairs committee in the Democratic-led House unanimously condemned the boycott Israel movement. On Thursday, the leader of the Republican-led Senate said it wasn’t enough, even if the full U.S. House of Representatives approved the bill.

Israel, BDS and Jews are not going away this election season.

Republicans and Democrats joined for a fleeting moment in celebrating the unanimous passage Wednesday of a non-binding resolution condemning the movement to boycott, divest and sanction Israel. It now goes to the House floor.

“I am deeply proud that more than three-quarters of my House colleagues, with overwhelming majorities of both parties, have co-sponsored my resolution making clear that Congress supports a strong US-Israel relationship, is committed to achieving a negotiated two-state solution, and forcefully condemns the Global BDS Movement,” Rep. Brad Schneider, D-Ill., who led sponsorship of the non-binding resolution with Reps. Jerry Nadler, D-N.Y. and Lee Zeldin, R-N.Y., said in a statement after the resolution advanced.

Also advanced in committee was a bill that would codify into law the $3.8 billion in defense assistance to Israel pledged by President Barack Obama in 2016, in his final months in office.

The American Israel Public Affairs Committee was elated. “AIPAC applauds the House Foreign Affairs Committee for adopting a pro-Israel resolution that rejects the Boycott, Divestment and Sanctions (BDS) campaign against Israel and a bill that authorizes security assistance to the Jewish state,” it said.

Indeed, the bills were manna for AIPAC, a throwback to the good old days when bipartisanship was the hallmark of pro-Israel endeavors. The BDS resolution was the baby bear of bills: It condemned BDS, but also upheld the right to oppose government policy — a number of Democrats have balked at separate legislation that penalizes Israel boycotts, saying that would infringe speech freedoms.

It also, as Schneider noted, reintroduces into the diplomatic lingo “two-state solution,” the path favored by much of the organized Jewish community, including AIPAC, but which has been abandoned by the governments of President Donald Trump and Israeli Prime Minister Benjamin Netanyahu. It too was bipartisan.

The good vibrations didn’t last. On Thursday, Sen. Mitch McConnell, R-Ky., the majority leader in the U.S. Senate, was attacking the House for not advancing a bill the Senate has approved that protects states that penalize businesses and contractors who boycott Israel.

House Speaker Nancy Pelosi, D-Calif., does not want to create an ugly fight in her caucus between Democrats who would back the bill, S. 1, and those who cite civil liberties groups who say it violates the First Amendment.

“What a sad and bizarre situation we find in the House,” McConnell said Thursday on the Senate floor. “I urge the Speaker of the House to do the right thing. Don’t let these far-left voices run the show. At long last, bring S. 1 up for a vote — the comprehensive legislation that sailed through the Senate with 77 votes. Bring it up for a vote, Madam Speaker. Let them vote. I bet we would see a pretty good outcome and show anti-Semitism the door.”

McConnell said BDS is “an economic form of anti-Semitism that targets Israel.”

The other bill that sailed through the House committee, backed by Rep. Ted Deutch, D-Fla., the chairman of the committee’s Middle East subcommittee, codifying defense assistance to Israel, is a component of S. 1. Pelosi and Deutch separated it out of S. 1 when that bill came to the House, and are pushing it in part in a bid to deflect criticism that Democrats are distancing themselves from Israel.

McConnell also referred to a House resolution condemning anti-Semitism that passed earlier this year; the resolution, sparked by anti-Semitic tropes peddled by Rep. Ilhan Omar, D-Minn. (she apologized for some of them), ended up also condemning Islamophobia at the behest of Omar’s left-wing colleagues, who said she had become a target for hateful attacks because of her faith.

“All the while, Senate-passed legislation that would actually do something about anti-Semitism has been languishing over in the House without a vote,” he said.

Omar separately joined Rep. Rashida Tlaib, D-Mich. and Rep. John Lewis, D-Ga., a civil rights icon who is close to the Jewish and pro-Israel communities, in introducing a nonbinding resolution that would uphold the rights of Americans to boycott.

Omar, who with Tlaib backs BDS, likely is advancing the bill in order to protect the right to boycott Israel, among others, but the resolution does not mention Israel. Lewis’ backing is rooted in the days during the 1960s civil rights struggles, which included boycotts of businesses that discriminated against African Americans. The bill cites past American boycotts of prewar Nazi Germany and Imperial Japan as well as the boycott of Apartheid South Africa.