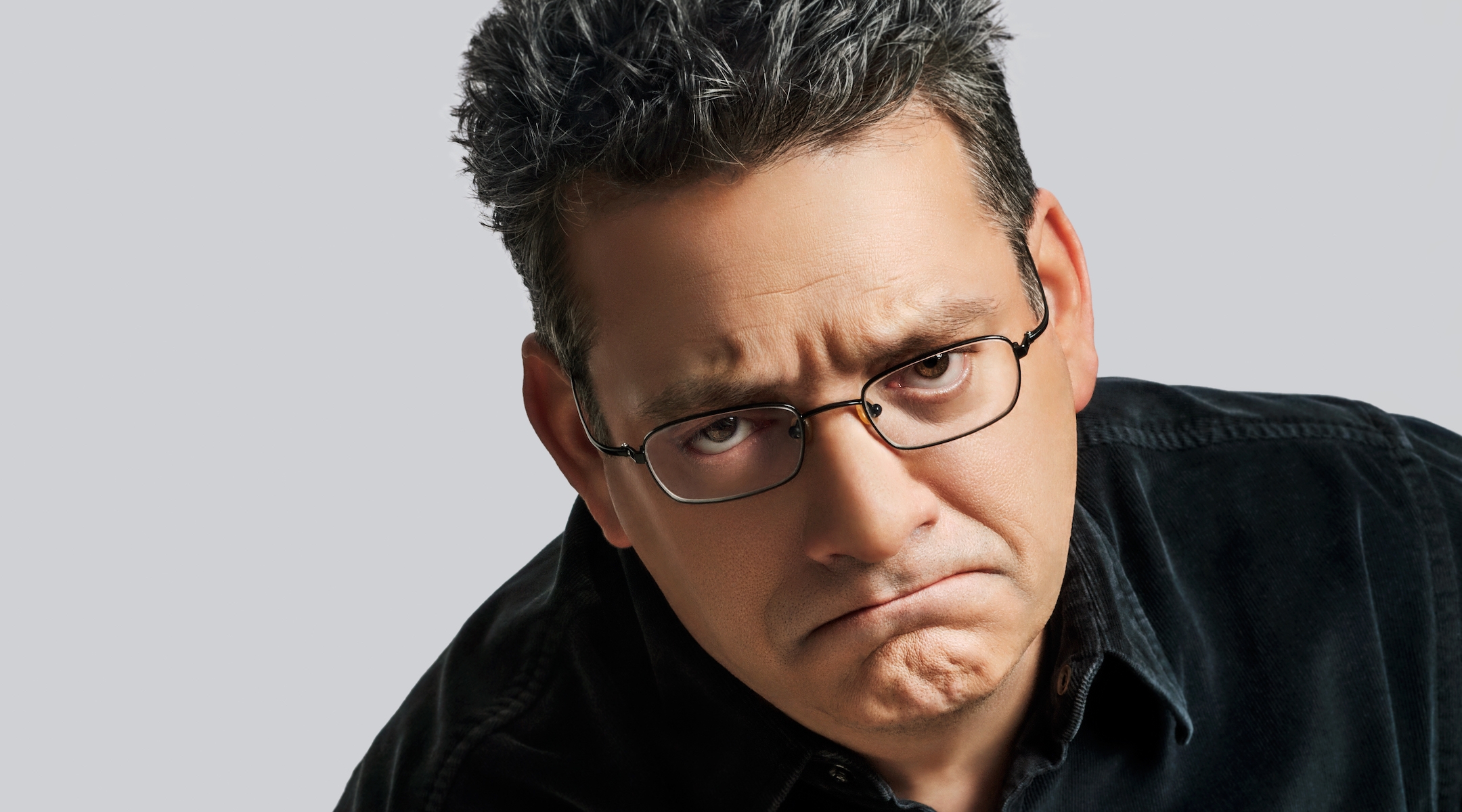 Andy Kindler has frequently referenced the Holocaust in his comedy. (Courtesy of Just for Laughs)
Advertisement

MONTREAL (JTA) — Andy Kindler is back to tell us that while the state of the union may not be great, the state of comedy is strong.

Known for his countless appearances on the “Late Show with David Letterman” and his recurring role as sportswriter Andy on “Everybody Loves Raymond,” Kindler has also established a niche as an ombudsman of sorts for the business of comedy. Since 1996, he’s given a “State of the Industry” speech, which he describes as “part rant, part roast,” at the annual Just for Laughs festival, which is in the midst of its final and busiest week in Montreal.

Kindler, standing before fellow comics, journalists and Hollywood insiders, unabashedly bashes comedians he feels have lost the funny. In his often controversial opinions, that includes everyone from Jay Leno to Ricky Gervais, with whom he’s had a years-long feud.

And he looks at developments beyond the comedians, which in recent years include the shadow that President Donald Trump has cast on the comedy business. Kindler believes Trump’s influence is surprisingly positive.

“When he first got elected, everyone was depressed. But now that he’s so overtly a racist, it’s actually great for comedy,” Kindler said. “It woke up [Stephen] Colbert, ‘The Daily Show’ and so many standups. I think it’s necessary [to do Trump-related jokes]. Comedy in the Reagan era, for example, pales in comparison because there is such actual danger now.”

It’s a mark of his successful career that Kindler can risk verbally biting the hand that feeds him, launching brutal attacks not only on various high-profile individuals but on the entertainment world in general.

The 62-year-old comic is a native of Queens, New York.

“My father was a cobbler,” he tweeted recently. “A peach cobbler.”

Actually his father was a plumbing and heating contractor. His mom was a homemaker who became an expert in antiques. Kindler’s paternal grandparents and maternal great-grandparents were all Russian-Polish immigrants, and he grew up attending Sunday school at a Reform temple.

“I didn’t like the classes,” he recalled, “but I was very excited about my bar mitzvah because it was a performance, even though I didn’t know I was going to be a comic then.”

Kindler’s mother, who grew up in a New York City suburb with few Jews, became somewhat alienated from her heritage.

“Hanukkah was not good in my house,” he lamented, “but Sukkot was my favorite holiday because in temple they gave us challah with honey and apples.” The whole family, Kindler recalled fondly, was funny, and he not only enjoyed growing up in Queens (“where everyone is disgusted with everything!”), but it was during those years he would sit down to watch standups on TV such as Alan King and Jackie Mason. They became his comedic role models.

Kindler has often included Holocaust references in his routines, but he takes pains not to trivialize the tragedy.

“I did an HBO special once in which I spoke about my fears of being rounded up. I said, ‘I won’t go on a train. It’s going to Baltimore? Right; more like Baltimore-Stuttgart!’ A Jewish comedy writer told me he was very upset with me, so I had to examine why I was doing such jokes,” he said. “And the reason was my own fear of the Holocaust happening again. So I feel it’s justified to examine it.”

“I understand that nothing compares to the Holocaust,” he said somberly, “but I think it’s important to compare Trump to Hitler in order to wake people up. Trump is like Hitler, except he’s doing it with Muslims and Mexicans. I’m not 100 percent sure all the time, but I think my stuff is bringing those memories back for a pointed reason.”

Along with his State of the Industry speech on Friday, Kindler will host “The Alternative Show” on four nights of Just For Laughs, described by the festival as the comedian “taking you off the beaten path of mainstream comedy and into the chaotic wilderness.”

Kindler has emceed that event since the 1990s, when “alternative” comics like Sarah Silverman, Marc Maron and David Cross were imagining possibilities for standup beyond the standard setup, punchline and audience work of the mainstream comedy clubs.

He says “the name doesn’t make much sense anymore because it’s all alternative now. I think comedy is in a better place than it’s ever been because it’s become so diverse.”

Kindler, who’s been married since 2002 to photographer Susan Maljan, shows no signs of slowing down. He’s a regular voice on the animated sitcom “Bob’s Burgers” and Comedy Central’s “Tosh.O,” along with doing standup throughout the country.

He doesn’t, however, deny that aging has an effect. Holding on to a podium during a recent appearance, Kindler paused mid-joke and said “Why am I leaning over like an old Jew?” A brief pause, then the answer: “Because I am an old Jew!”