Max Berger, an activist against Israel’s occupation, is an aide to Elizabeth Warren 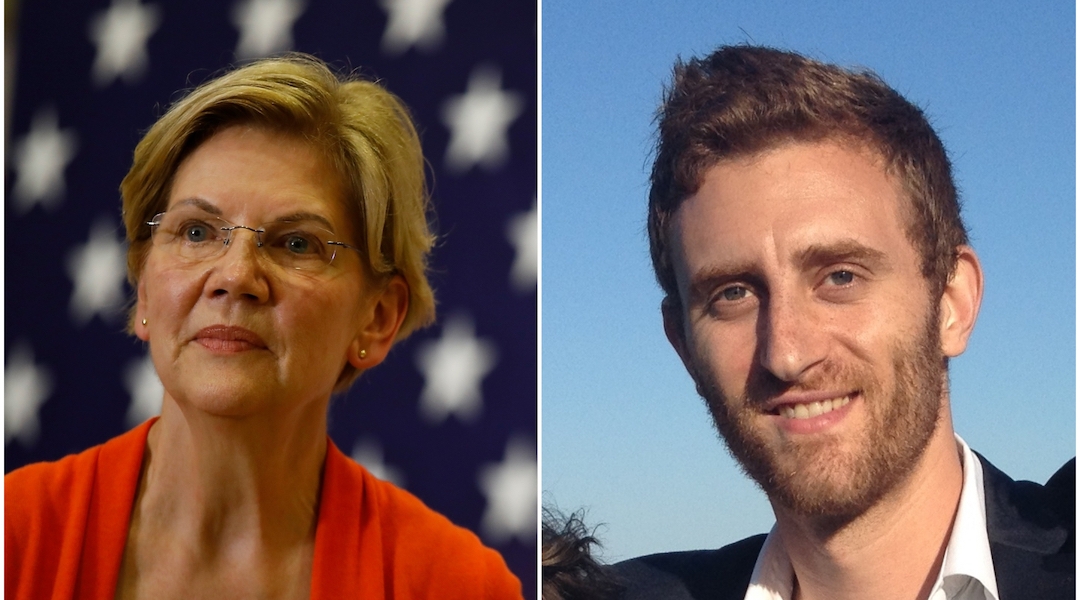 (JTA) — Days after Israeli ground troops invaded Gaza in 2014, a group of leftist millennial Jews gathered to plan a public protest of the military operation.

The new group, which called itself IfNotNow, discussed a public demonstration in front of the Conference of Presidents of Major American Jewish Organizations, an establishment Jewish umbrella group.

Max Berger was one of the planners who urged them to take it a step further: The protesters should get arrested at the Presidents’ Conference headquarters in New York, he suggested. And they should recite kaddish, the traditional Jewish mourner’s prayer, for Israelis and Palestinians who had died in the fighting.

When the protest took place, on July 28, 2014, that’s what they did. Berger was one of nine Jews arrested in the Presidents’ Conference building.

“Max, because of the experience that he brought, understood the value of raising the stakes and bringing the crisis to the door of an institution through the strategy of direct action in that way,” said Simone Zimmerman, a fellow IfNotNow cofounder. “He knew how to bring that seriousness and depth of pain and anger and betrayal, how to support a group into bringing that out.”

IfNotNow was a new group, but for Berger, disruptive protest was an old game. Berger, 33, is already a journeyman of the activist left, from Occupy Wall Street to IfNotNow to Justice Democrats, the outfit that supported Rep. Alexandria Ocasio-Cortez’s unlikely primary win.

Now, he’s working for Sen. Elizabeth Warren as her director for progressive partnerships, placing a leader of the millennial Jewish left-wing insurgency inside an ascending Democratic presidential campaign.

The Warren campaign did not make Berger available for an interview. But his friends, as well as the reams of online articles by him and quoting him, indicate that he clicks with Warren’s combination of anti-establishment rhetoric and detailed, wonky plans. In addition to IfNotNow, Berger co-founded Momentum, a group that trains progressive activists.

“Warren matches even his demeanor and his style of politics, which is very deliberate and well thought out,” said Waleed Shahid, who has partnered with Berger in progressive movements and is now the communications director at Justice Democrats. “It’s funny that Warren’s slogan is ‘I have a plan for that.’ Max would do trainings at Momentum about how organizations don’t plan enough.”

Berger’s presence in the Warren campaign has also angered Jews on the political right, and even some on the pro-Israel left. Canary Mission, the anonymous blacklist of perceived anti-Israel “hate groups and their members,” has an extensive dossier of his past tweets and INN actions, accusing him of “spreading hatred for Israel” and demonizing pro-Israel American Jews. Others have cited Canary Mission in calling for Berger to be fired.

Berger has deleted most of his tweets, but screenshots and quotations preserved by his critics show personal support for boycotts of Israel (at least as of two years ago) and calling Israel’s killing of Gazan protesters in clashes on the border a “pogrom.” A tweet he wrote in 2017 says “I agree with BDS, but it’s not a mistake to consider it largely anti-Zionist. For Zionists, it’s an existential question.”

Carinne Luck, a co-founder of IfNotNow, clarified that while Berger personally supports Israel boycotts, he does not identify with the Boycott, Divestment and Sanctions Movement.

For much of the Jewish pro-Israel mainstream, on the left as well as the right, BDS is anathema, because its Palestinian leadership refuses to accept a Jewish state in any part of historic Israel. Critics of IfNotNow note that, according to its principles, the Jewish group does “not take a unified stance on BDS, Zionism or the question of statehood.”

Mark Mellman, president and CEO of another new group, the Democratic Majority for Israel, told JTA said it’s “deeply troubling at a policy level that he cofounded an organization that does not recognize Israel’s right to exist.” Mellman did not call for Berger to be fired. 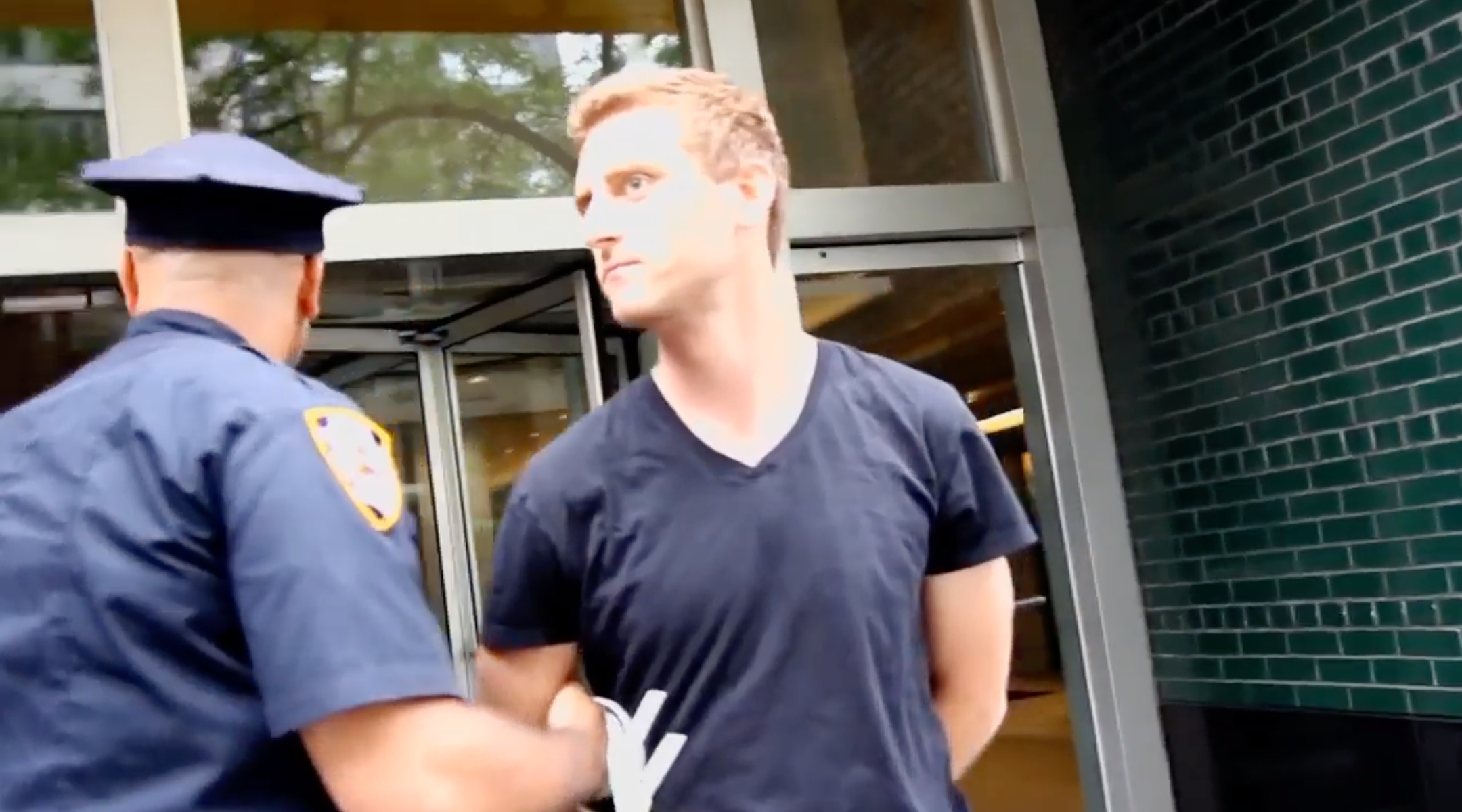 Max Berger is arrested outside the Conference of Presidents of Major American Jewish Organizations headquarters in New York, July 28, 2014. (Screenshot from YouTube)

The Progressive Zionists of California, a grassroots group of about 200 members, said IfNotNow displays “one-sided condemnation and vilification of Israel” and called for the Warren campaign to dismiss Berger, whom they grouped among “enemies of Israel.”

“It puts [Warren] at risk to have someone with his public stances,” said Susan George, a founding member of the California group and a 2016 delegate for Sen. Bernie Sanders’ presidential campaign. “Personally I’ve been a huge fan of Elizabeth Warren. Since the financial crisis, she was my hero. But to put someone like Max Berger in such a position to influence progressives, it is concerning.”

But what critics see as a liability, Berger’s allies see as an an asset. Berger’s hire is a sign, they said, that the Democratic party may be moving left on Israel.

“It’s incredibly affirming and reassuring that the Warren campaign knew everything there is to know about Max and still wanted him on board,” said Luck. “I don’t think Elizabeth Warren’s campaign chose Max because of his position on Israel-Palestine, but it does send a signal that someone with views like Max’s would be there in such a serious political campaign.”

Berger’s presence on Warren’s campaign may be paying off for those who want candidates to be tougher on Israel: When IfNotNow activists asked Warren, at a campaign event, if she would “push the Israeli government to end the occupation,” she replied, “Yes, yes,” then added, “So I’m there.”

In a June interview with The New York Times, Warren called Israel a “good friend” and voiced support for a two-state solution with the Palestinians. She said that the United States “cannot dictate the terms of a long-term settlement” but added that “the current situation is not tenable.”

“They face enormous challenges and they are our strong ally,” she said. “We need a liberal democracy in that region and to work with that liberal democracy. But it is also the case that we need to encourage our ally, the way we would any good friend, to come to the table with the Palestinians and to work toward a permanent solution. I strongly support a two-state solution.”

Berger has more moderate views than some of his Jewish leftist comrades. He criticized Rep. Ilhan Omar’s statements echoing anti-Semitic stereotypes, as well as the Movement for Black Lives accusing Israel of genocide. He also encouraged the Jewish community to stand with both Omar and the Black Lives Matter movement.

Berger grew up in Massachusetts and attended Reed College in Portland, Oregon. His leftist streak started early. In high school, he organized a trip to Washington, D.C. to protest against the Iraq War. His mother, Judy Berger, remembers that he submitted a middle school paper about social issues in Chiapas, Mexico, after he got interested in the local politics on a family trip there.

“One of the teachers accused him of plagiarism and I was livid,” she said. “There was no plagiarism involved. This was something this young kid was concerned about and read about and knew about.”

After college, he worked at J Street, the liberal Israel lobby, as a new media assistant. He gained notice as an organizer of the Occupy Wall Street movement in 2011, where he was part of its more moderate wing.

Berger bounced around progressive organizations. He worked for Rebuild the Dream, founded by former Barack Obama aide Van Jones, as well as the Progressive Change Campaign Committee. In 2017, after Donald Trump won the presidential election, he and Shahid co-founded All of Us, a campaign to elect progressive Democrats that eventually merged with Justice Democrats.

In 2016, he was an outspoken supporter of Bernie Sanders, writing in Haaretz that the Vermont senator “speaks with a prophetic voice that is at the heart of our tradition.” But even then, he carried a torch for Warren, writing in a Medium post on the first debate between Sanders and Hillary Clinton that “there isn’t anyone else on stage who people can imagine as president. [Clinton’s] real victory came months ago when Elizabeth Warren decided not to run.”

“He ultimately, really is much more focused on a certain kind of winning or a certain kind of impact,” said Lissy Romanow, Momentum’s executive director, who also worked with Berger in IfNotNow. “He’s ultimately much more sympathetic to Bernie’s ideology and his politics, and that ultimately, what it will take to win and to govern, you will need something more like what Warren has.”

Friends say Berger is also good at dealing with the kind of backlash he’s experienced from his pro-Israel critics. Zimmerman, who was fired from Sanders’ 2016 campaign after a similar wave of condemnation, recalls that he was supportive to her then in speaking out for her and crafting an effective response.

Berger also has two tools to diffuse pressure, his friends say: an addiction to Szechuan cuisine and bagels and lox, and a relentless gallows humor. Berger’s Facebook cover photo, for example, is a popular meme of a dog sipping coffee in a house engulfed in flames. In the classic meme, meant to mock what leftists see as complacency in the face of American democracy’s dire straits, the dog says “This is fine.” In Berger’s version, the dog says “Give it a chance.”

“He does a very good Bernie impression,”said Shahid. “But I feel like that will get him in trouble these days.”