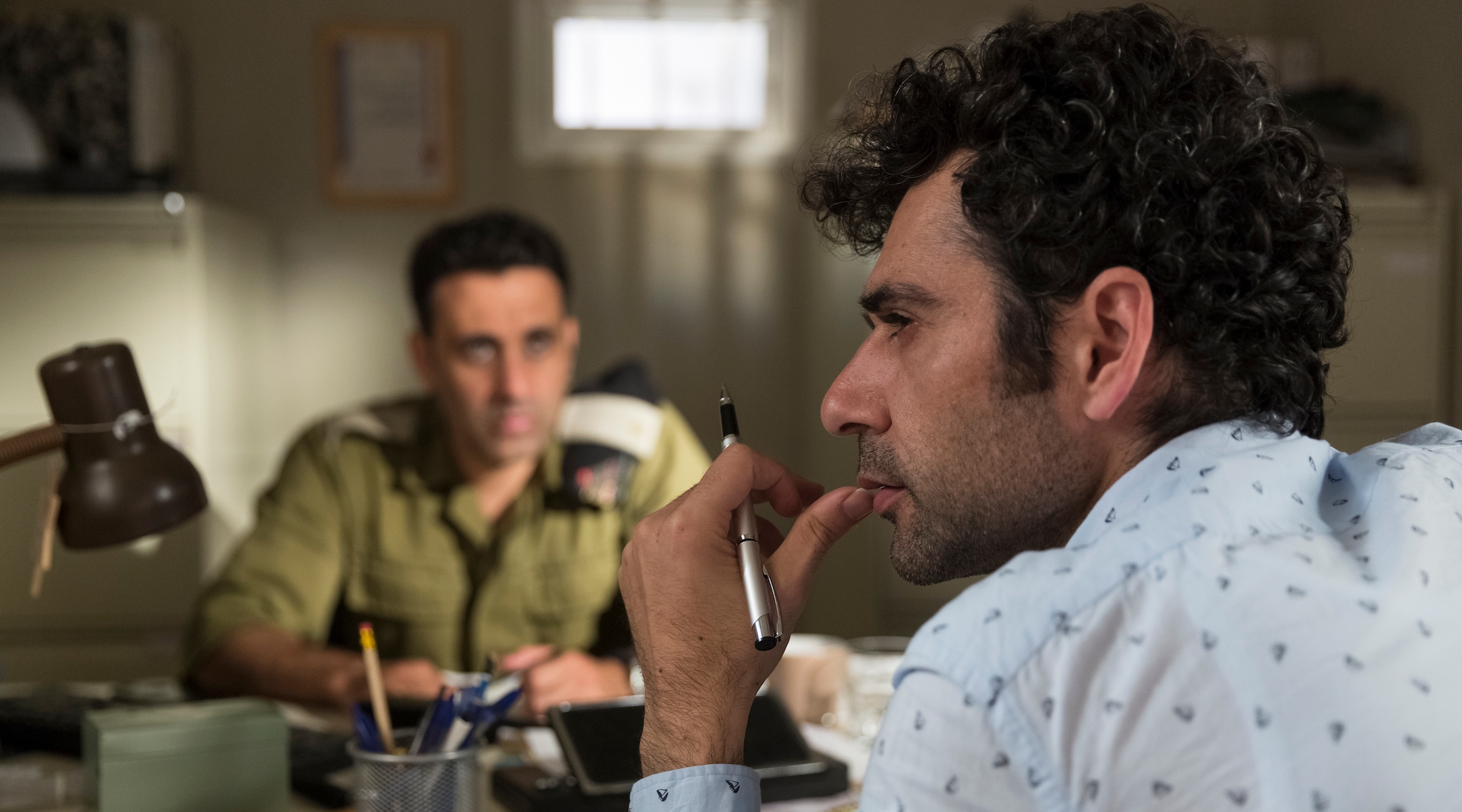 NEW YORK (JTA) — In “Tel Aviv on Fire,” the main character travels every day between Ramallah and Jerusalem.

In the Palestinian city, Salam works as a production assistant on the set of a hilariously clichéd television show (after which the film is named), which is set during the lead-up to the 1967 war and follows a Palestinian secret agent trying to ensnare an Israeli military officer in a honey pot trap.

In Jerusalem, the young man struggles to make ends meet and unsuccessfully tries to convince his ex-girlfriend to give him a second chance.

As part of his commute, Salam passes through an Israeli checkpoint, where he ends up striking up a friendship-of-sorts with an Israeli officer, Assi. The officer has his own motives in blackmailing Salam to change the script so that the romantic lead will fall in love with her Israeli target.

In the film, whose official U.S. release is Aug. 2, the constant back and forth symbolizes the two worlds that Salam travels between, often not so smoothly.

He is “trapped in this political reality, when all he wants to do is get by,” the film’s  director and co-writer, Sameh Zoabi, told the Jewish Telegraphic Agency last week.

The film has already won several awards, including best film at the Haifa and Seattle International Film Festivals.

Zoabi, 44, knows what it’s like to travel between the two worlds — and be questioned about his allegiances. The filmmaker, who speaks both Arabic and Hebrew, grew up in Iksal, an Arab-Israeli village in the north and later studied film at Tel Aviv University.

“It’s always that question that comes up, when you make a movie or you write: Is the film that he’s making or made, is it too Palestinian or too Israeli?” he told JTA at Quad Cinema in downtown New York following a press screening of his film. 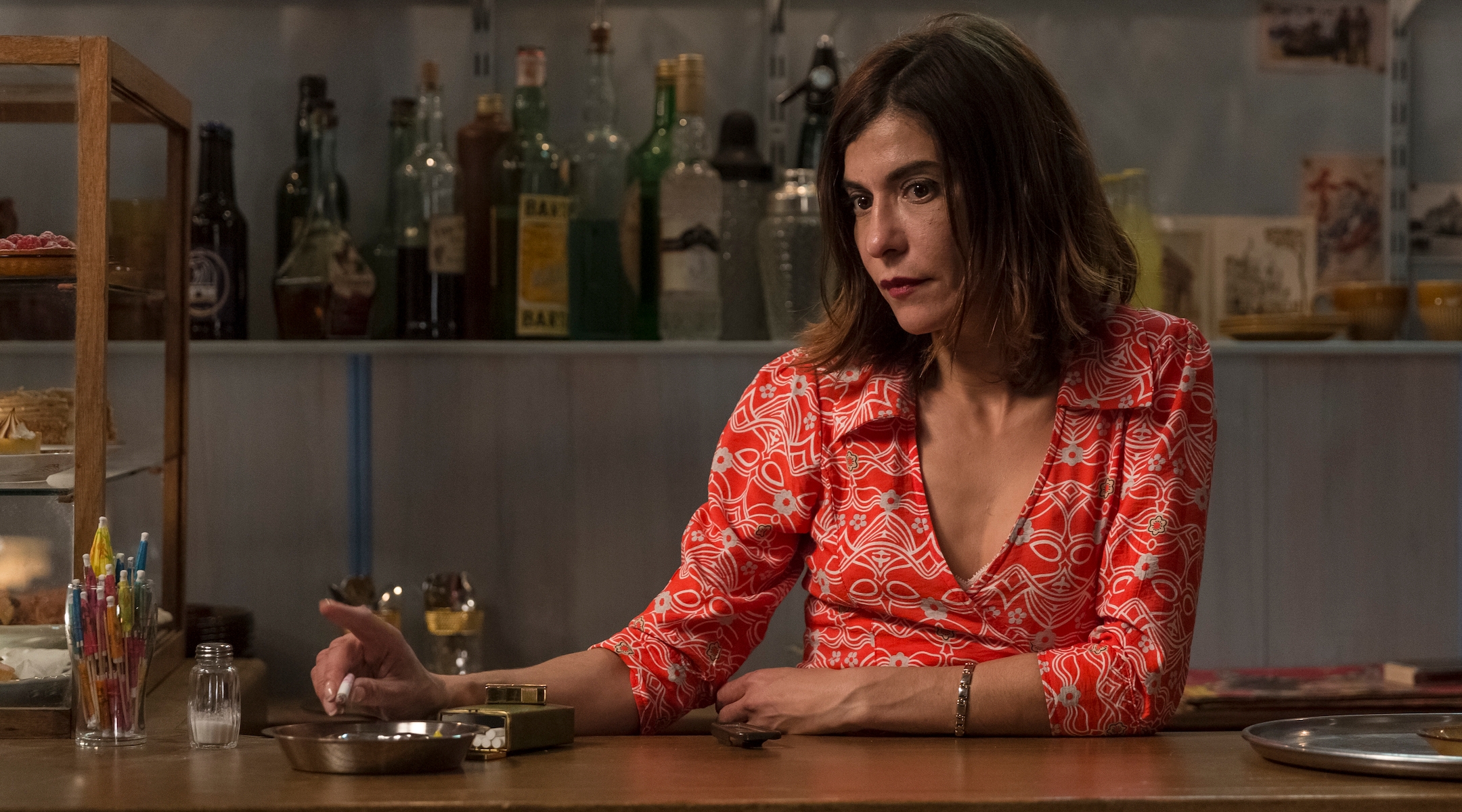 Zoabi, who lives in Brooklyn and teaches directing and screenwriting at New York University, has dealt with that subject in his two previous feature-length productions.

His 2010 film “Man Without a Cell Phone” is about a young Palestinian man living in Israel whose cell phone usage — mainly to flirt with women — alarms both his father and the Israeli authorities. In “Under the Same Sun,” released in 2013, two businessmen, one Israeli and one Palestinian, work together to set up a solar energy company despite opposition from those around them.

But Zoabi feels that his latest film resonates in a different way because the reality in the region has grown even more tense.

“Nobody sees a solution, and the leadership doesn’t bring any solutions, so comedy becomes a way of making people laugh about the situation but also get re-engaged,” he said.

The film was made by production companies from four countries: Israel, Luxembourg, France and Belgium.

Despite the fact that it’s set in Ramallah and Jerusalem, most of it was actually filmed in Luxembourg. Zoabi says filming the majority of in Europe made him focus even more on the visuals — props, furniture, lighting — to make sure the feeling was still there.

“There’s always this tendency to deal with films from our part of the region that you have to be authentic to the place, of cinéma vérité,” he said.

While shooting in Europe, “I realized actually it’s the opposite. What you need to create on the screen is the sentiment, the feel of the place.”

Despite the film’s many humorous scenes, Zoabi did not want to shy away from the Palestinian-Israeli conflict and its consequences.

There’s a scene in which Salam and Assi are talking about the script for the series’ latest episode in Assi’s office at the checkpoint, when two soldiers enter the room with a handcuffed Palestinian boy.

“That was a moment where suddenly you allow the audience, like the characters, to live in a bubble where coexistence could be possible,” Zoabi said. Inserting the reality of the conflict in the shape of the boy “is one way to burst this bubble.”

Still, the film isn’t just about portraying the hurdles to peace. Zoabi ultimately hopes viewers will leave feeling hopeful about the future. And without revealing too many spoilers, Salam manages to find a way to bring the two soap opera lovers together in an unexpected ending that includes an undercover rabbi and plenty of melodrama.

“I think it’s important that people know that this is a fresh look that wants to bridge the rift,” Zoabi said, “and a film that wants to remind people how we can move forward and not be jaded by the situation.”