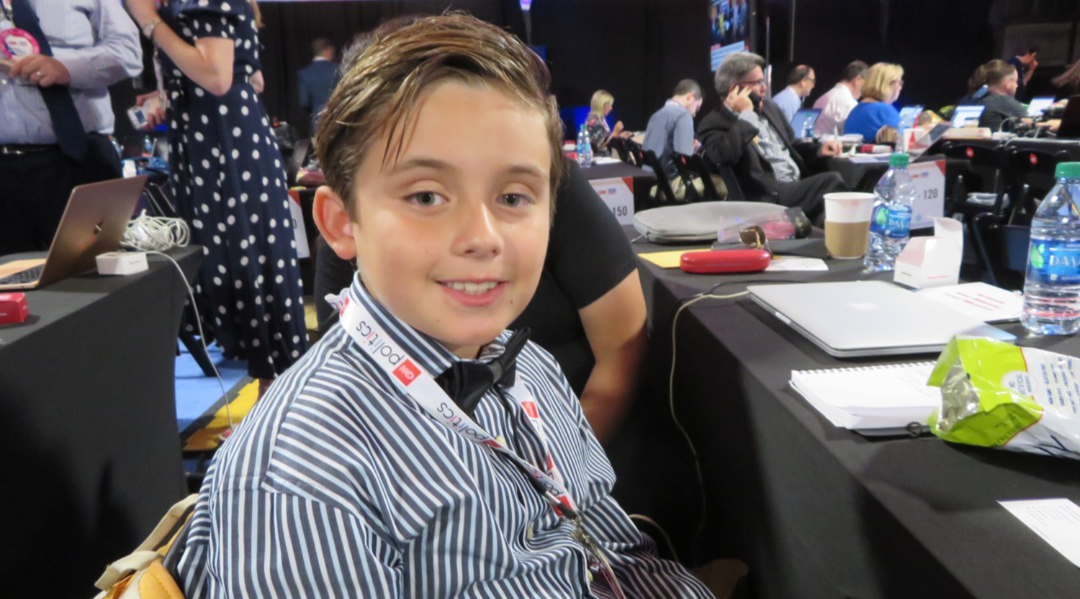 DETROIT (JTA) — For any reporter, careening in a year from reviewing restaurants to covering the presidential debates would be a pretty fast rise. But then again, Jefferson Henry Kraft is only 10 years old.

Kraft is the KidScoop Media correspondent covering the Democratic presidential debates, taking place here tonight and Wednesday night. The Jewish Telegraphic Agency was fortunate enough to be assigned the “spin room” seat right next to his, and in one of those conversations typical of the friendly yet guarded way that reporters introduce themselves to one another, it turned out Jeffrey (his byline moniker) is Jewish.

KidScoop Media was founded over a decade ago “to make young people’s voices a part of the national conversation.” When JTA spoke with him, Jeffrey and the non-profit’s founder, Michelle Mayans, were formulating questions for the candidates when they and their surrogates work the room after Tuesday’s debates.

“When you become president what is your plan to stop the glaciers from melting?” was one of the questions Jeffrey, sporting a neat black bow tie and a pinstripe shirt, carefully entered into his notebook in neat, large letters.

The idea, Mayans explained, was that Jeffrey would be able to show the candidate the question during one of the crazed spin room gaggles that follow the debates, in case his voice isn’t heard.

Jeffrey knows the candidate he wants to interview: Joe Biden, fronting the pack among the 25 Democrats seeking the party’s presidential nomination.

Why Biden? “Because he was the vice president of Obama and I also want to interview Joe Biden because I’ve heard many good things about him and he seems to look nice,” he explained.

Jeffrey’s mom originally contacted the Los Angeles-area outlet — its copy appears in print in the Culver City News, Jeffrey’s hometown paper — because Jeffrey is something of a foodie. “I eat a lot of interesting foods,” he said. He was assigned a restaurant review.

Jeffrey’s writing style is breezy and effusive. “Sauce that takes a special person to come in at 4 AM (I’m sleeping then) to prepare and cook for hours with love,” he wrote of Pasta Sisters. “The gnocchi recipe was passed from Chef Paola’s Grandmother (Maria Giovanna). By the way, that was my absolute favorite!!!! Ricotta cheese made in Italy is heaven, I think!!! I’m sure if Darth Vader had a meal at Pasta Sisters he would have been, just a bit nicer.”

His passion for the environment led to the debates assignment. “My interest in the environment is the climate and how the ice caps are melting and endangered species,” he said. “I’ve been interested in that pretty much my whole life, I love animals, animals are important to me, and to all of us.”

Jeffrey couldn’t come up with a Jewish themed question for the candidates (yes, JTA did ask him for one). But he did share his favorite holiday.

“Hanukkah, because on Hanukkah I love lighting one candle every day and the other thing I love about it is every day you get a small present,” he said.