Democrats get personal on second night of debates, but once again scorch Trump for racism 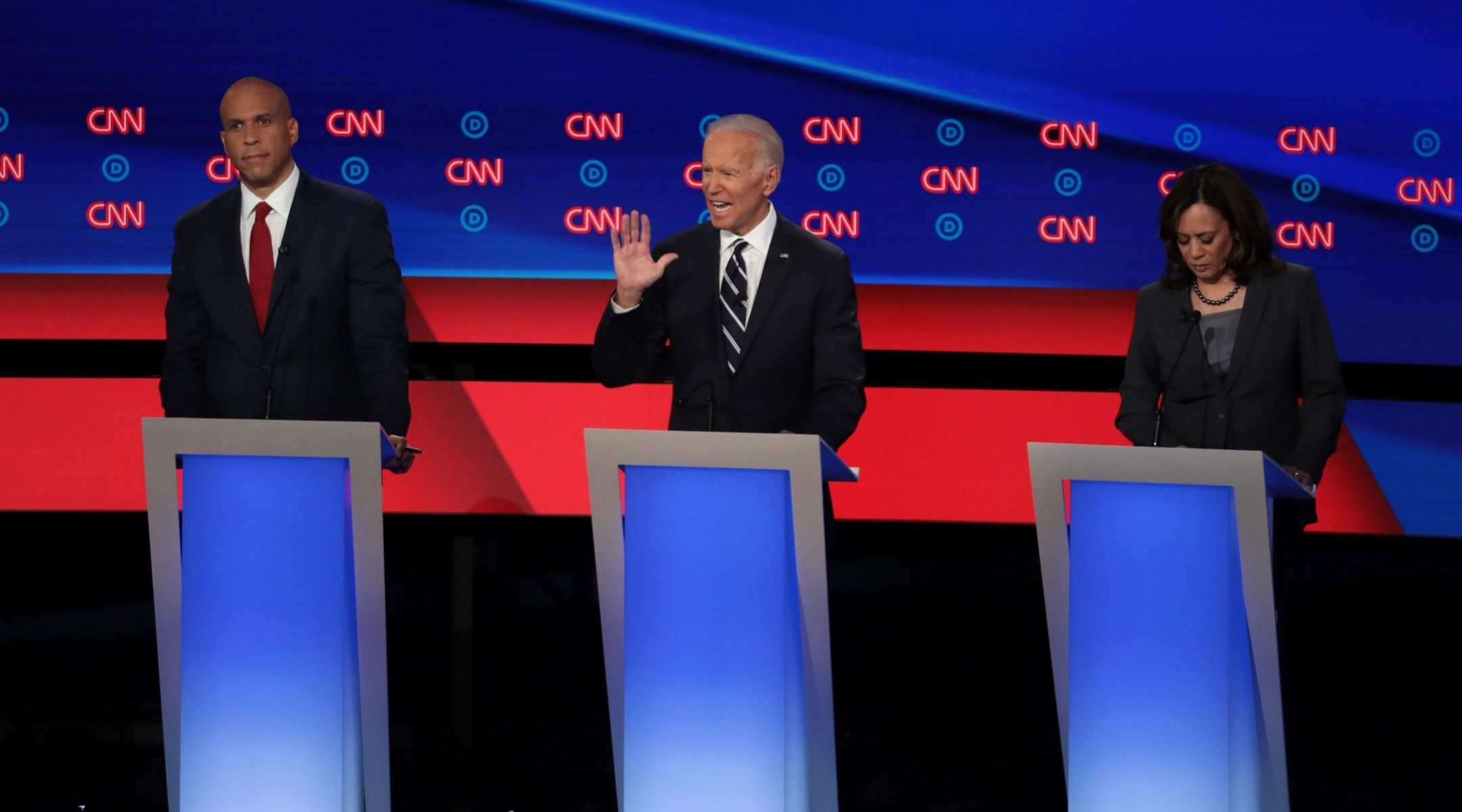 DETROIT (JTA) — The second night of debates for Democrats seeking the presidential nomination was often bitter and personal, but the candidates united once again in accusing President Donald Trump of racism.

Many of the candidates took shots at former Vice President Joe Biden, who is the front-runner among the 25 Democrats running. Ten candidates who met minimum polling and fundraising thresholds debated on Wednesday, as did another 10 on Tuesday.

Sen. Kamala Harris, D-Calif., who drew blood in the June debates when she recalled Biden’s boast of getting along with segregationist colleagues and his past opposition to busing school students as a means of integration, returned to that theme.

Booker, the New Jersey senator, slammed Biden for his past support of tough-on-crime laws, and Biden returned fire noting reports of police abuses in Newark when Booker was major of that New Jersey city.

Rep. Tulsi Gabbard, D-Hawaii, in turn, excoriated Harris for her tough-on-crime reputation when she was California’s attorney general.

Sen. Kirsten Gillibrand, D-N.Y., resurrected an old op-ed Biden had written as senator opposing a bill that would have funded childcare. Biden noted his advocacy for a number of bills advancing women’s rights, and that Gillibrand had in the past praised him for his record.

“I don’t know what’s happened except you’re now running for president,” he said, to applause.

The first night was less personal and focused more on policy differences between moderates and the two progressive frontrunners who appeared that night, Sens. Bernie Sanders of Vermont and Elizabeth Warren of Massachusetts.

Both nights, candidates united in calling out Trump for racism, most recently for his repeated attacks on the majority-black city of Baltimore.

“He is using the tired old language of demagogues, of fearmongers, of racists,” Booker said to cheers.

Immigration featured large in the debate Wednesday, with the major difference over whether illegal crossings should be decriminalized. Sen. Michael Bennet, D-Colo., opposed decriminalization but added that he did not believe that anyone on the stage would separate children from their parents at the border, as had the Trump administration.

“This is personal for me,” Bennet said. “My mom is an immigrant, and she was separated from her parents during the Holocaust in Poland.” Bennet, who does not identify himself as Jewish, had in the June debates also noted the Holocaust past of his mother and grandparents.

Biden’s first remarks were aimed at Trump’s divisive rhetoric. “Just look at this stage, made up of very diverse people from diverse backgrounds, went on to be mayors, senators, governors, congresswomen, members of the cabinet, and, yes, even a vice president,” he said. “Mr. President, this is America. And we are stronger and great because of this diversity, Mr. President, not in spite of it, Mr. President.”

Foreign policy once again barely featured in the questions from CNN moderators. Andrew Yang, an entrepreneur, was the only candidate to be asked a question about Iran policy. “I would move to deescalate tensions with Iran because they’re responding to us pulling out of the agreement,” Yang said, referring to the 2015 Iran nuclear deal, which Trump pulled out of in 2018.

“We have to reenter that agreement and renegotiate the timelines because right now the timelines don’t make sense,” said Yang. Critics of the deal negotiated under the Obama administration said it allowed Iran to return to weapons-grade enrichment levels too soon.

The deal traded sanctions relief for a rollback of parts of Iran’s nuclear program, and its commitment to never seek a weapon. As Trump has reintroduced and reinforced sanctions, the Iranians have begun to violate some terms of the deal, including limits on stockpiles of enriched uranium.

New York Mayor Bill de Blasio was upset that the moderators only asked Yang about Iran. “We’re on the march to war in Iran right now!” he shouted as the moderators spoke over him.