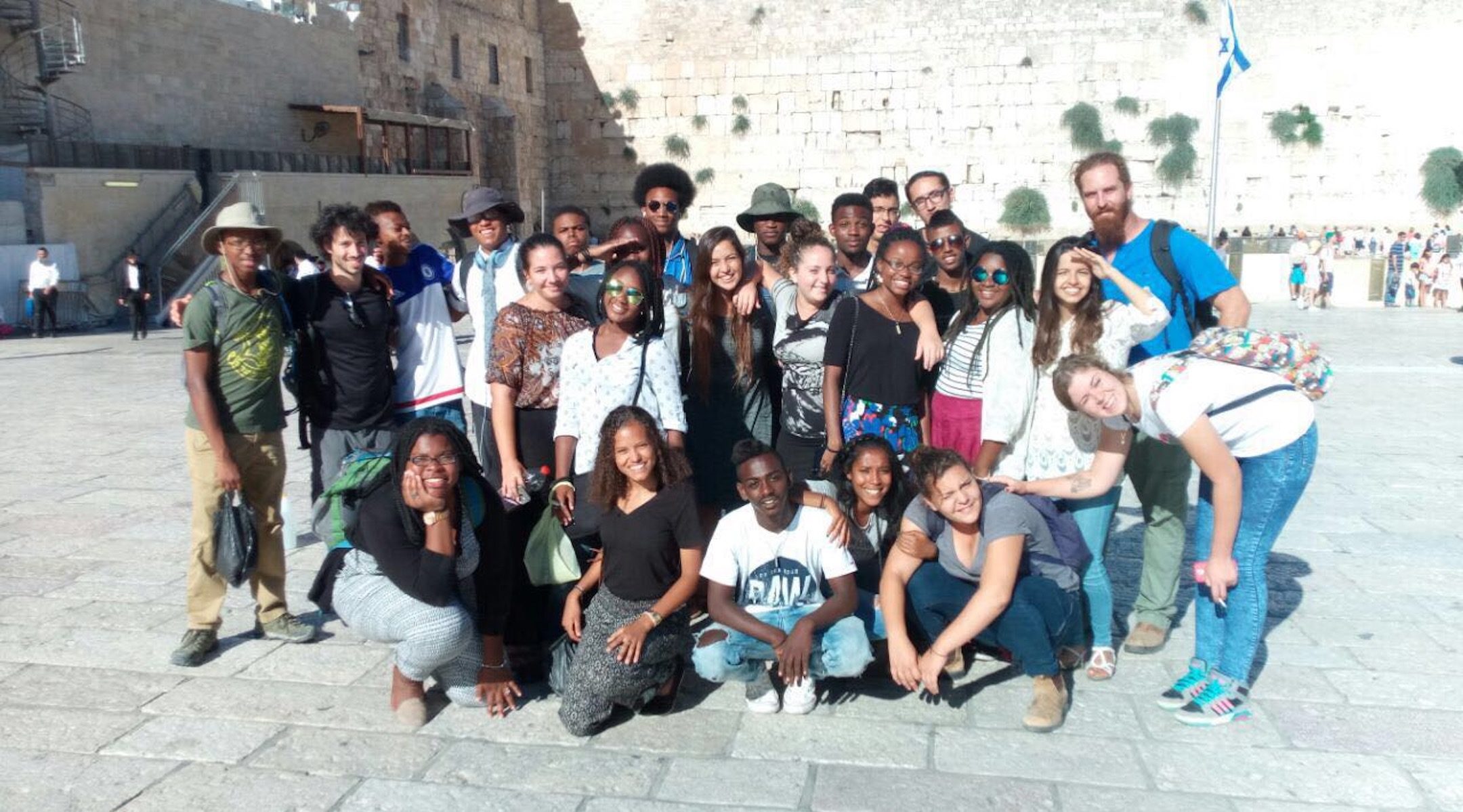 David Cuthrell, fourth from right in back row, said visiting Israel had a big impact. (Courtesy of Cuthrell)
Advertisement

(JTA) — Eight years ago Aaliyah Cuthrell knew little about the Jewish community, beyond what she had seen on a visit to her local Jewish community center to use the pool.

Things look different now for the 24-year-old. As a high school junior, she joined a prestigious two-year program for African-American teens in Baltimore. The program, founded by Rep. Elijah Cummings, D-Md., seeks to strengthen ties between the African-American and Jewish communities in his Baltimore district. As part of her fellowship in 2011-2013, Cuthrell met with Jewish teens, attended seminars on topics such as anti-Semitism and the Holocaust and spent close to a month living in a youth village in Israel’s north.

Cuthrell said that after having done the program she believes it is crucial for the two communities to have good ties.

“From what I saw growing up and from how I’ve studied things when I was in college and learned about incidents in the past, the communities are not very close,” Cuthrell, who works as a communications coordinator for an insurance company, told the Jewish Telegraphic Agency.

Bringing them together is “important because it brings two communities that aren’t very close together who can support each other during tough times.”

She is one of more than 200 graduates of the Elijah Cummings Youth Leadership Program in Israel. The fellowship, which celebrates its 20th anniversary this year, was founded by the African-American lawmaker to bridge gaps between the Jewish and black communities in his Baltimore district. Every year about a dozen teens participate in the program.

In recent tweet attacking Cummings, President Donald Trump referred to his majority-black district as “a disgusting, rat and rodent infested mess,” a remark that many criticized as racist. Local leaders, including Jews, leaped to the defense of the congressman and their admittedly troubled city. Some cited the Israel program as an example of what he has done for the community. Cummings often speaks highly about ties between Jews and African-Americans.

“I want to send a message that we cannot as African-Americans progress without coalitions, and our greatest coalition partner has been the Jewish people in America,” he recently told WBALTV 11 in an interview about the 20th anniversary of his program.

For Cuthrell, the program even changed her social circle. Today, many of her friends are Jewish.

If she hadn’t been on the program, she said, “I wouldn’t be able to relate to them. And that’s kind of how I ended up talking to them: talking about this program.”

The program operates under and receives support from the Baltimore Jewish Council, which is an agency of The Associated, the Jewish federation of Baltimore. Its director, Kathleen St. Villier Hill, declined a request for comment by JTA.

There are three main components to the program: leadership development, a trip to Israel and community service. Fellows attend workshops on a range of topics from life management skills and activism to black-Jewish relations and Holocaust remembrance. They also meet with local and national politicians.

After the first year, fellows travel to Israel, where they stay for almost a month at Yemin Orde, a youth village near Haifa. There, they work with Israeli teens from diverse background, volunteer and tour the country. Upon returning, fellows speak about issues of diversity and mentor middle school students in their home community.

For many the trip to Israel is the first time they travel outside the country.

That was the case for Michaelangelo Hayes, who participated in the program in 2010-2012. Hayes’ grandfather is Jewish, so he was already familiar with the religion, but he said the program taught him more about Israel. Being exposed to another country motivated the 24-year-old to learn about the world and ultimately go on to major in international relations in college.

“That changed my whole perspective,” he told JTA.

Hayes also criticized Trump’s comments about his district, though he did concede that many people live in poverty.

“I don’t agree with what President Trump said and his comments,” he said, “but one thing I do [know] is that there’s a lot of destitute conditions in Baltimore city.”

Another graduate, Samuel Scott, said that the use of the term “infested” to refer to the district was “very disrespectful.”

Scott, 35, traveled to Israel as part of the program in 2001. Scott, who now serves as vice chair of its board, was so touched by learning about Jewish and Israeli culture that he still continues to great most people he comes across with a Hebrew greeting: shalom.

“I love everything about Israel, really,” he said. “The conflict, no, but there’s a lot of things to love about Israel.”

For Scott, the program was just the beginning in his journey of learning about Judaism.

“It really opened my eyes to history,” he said. “I learned about the struggles of the Jewish community a lot more and how there were parallels to the African-American community, and from there, that peaked my interest.” 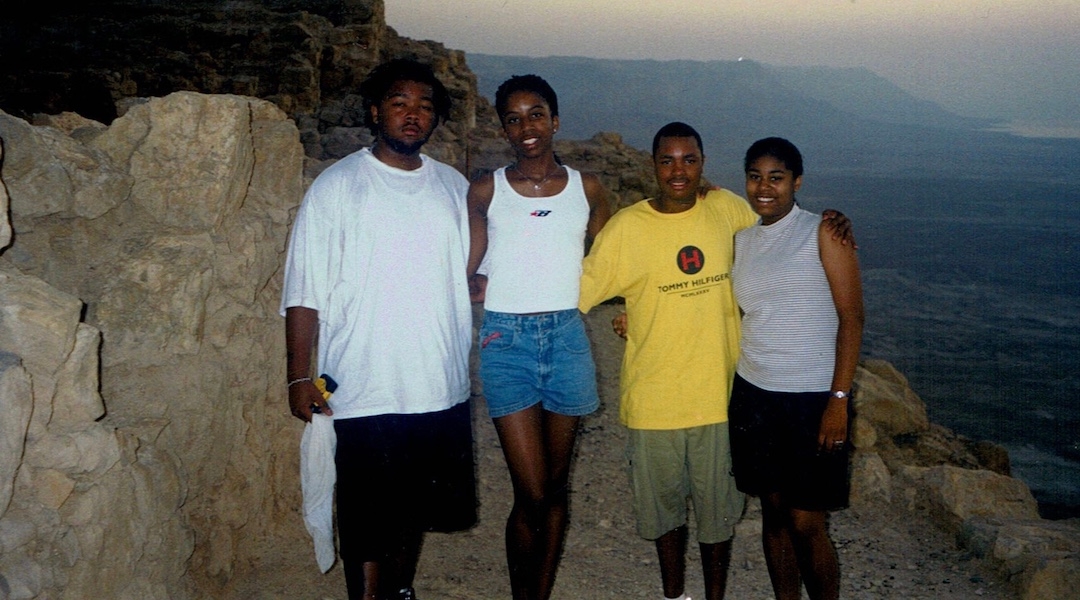 The trip to Israel inspired Samuel Scott, in yellow shirt, to learn more about Judaism. (Courtesy of Scott)

After the program, Scott, who grew up Catholic, continued to learn about Judaism and today he feels such a draw to the religion that he is considering converting.

Though that result is not typical, the program does challenges participants’ perspectives in many ways. David Cuthrell, Aaliyah’s cousin, said the program opened his eyes to a new world view.

“The biggest thing I would say I took away from the program would be a sense of connectedness,” said Cuthrell, 20. “Even though [there are] different cultures and different people all around the world, [and] we all have our differences, we still have many base similarities.”

“When you work together side by side,” she said, “a program like this makes the opportunity to break those stigmas and really know a person.”