Elijah Cummings’ district, which Trump derided as ‘disgusting,’ has a significant Jewish population 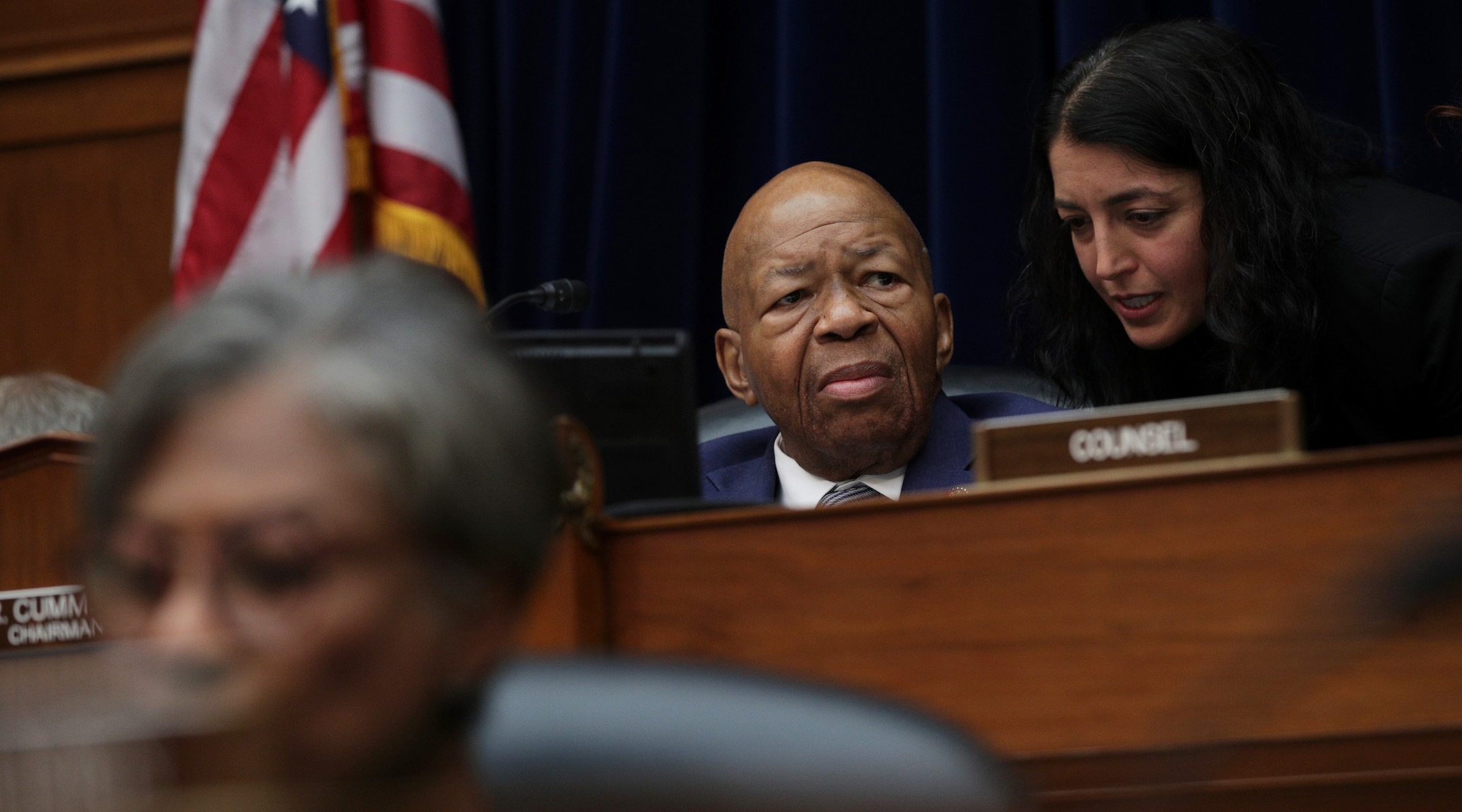 Committee Chairman Rep. Elijah Cummings, D-Md., listens to an aide during a meeting of the House Committee on Oversight and Reform on Capitol Hill in Washington, D.C., June 12, 2019. (Alex Wong/Getty Images)
Advertisement

(JTA) — Jewish leaders in Baltimore have come to the defense of Rep. Elijah Cummings, the African-American Democrat who has come under withering attack from President Donald Trump.

After spending a week berating the group of four Democratic freshman known as “The Squad” — all women of color — Trump used Twitter over the weekend to attack Cummings, whose 7th District includes over half of the city of Baltimore.

On Saturday, the president called Cummings “a brutal bully” for criticizing conditions at border detention camps for migrants.

“Cumming[sic] District is a disgusting, rat and rodent infested mess,” the president wrote on Twitter, following a “Fox & Friends” segment essentially making the same charges. Defenders of the president said his descriptions of Baltimore’s troubled inner city were accurate, while his critics said his tweets continued a pattern of singling out majority black neighborhoods and countries as “infested” and demonizing non-white opponents in stereotypical terms.

More than 30,000 Jews live in Cumming’s district and many have favorable views of the longtime congressman.

The Jewish community “has been able to count on Rep. Cummings time and again for assistance and leadership,” Howard Libit, executive director of the Baltimore Jewish Council, told Haaretz.

Israel Patoka, who serves on the city’s county council, called Cummings “a true ally of the Jewish community and a champion for the causes that we care about.”

Cummings has worked to build ties between the African-American and Jewish communities in his district, including by founding a program that brings non-Jewish high school students to Israel.

The Elijah Cummings Youth Program in Israel, which operates under the Baltimore Jewish Council, is a two-year leadership fellowship for African-American youth that culminates in a trip to Israel, where students tour the country and get to know young Israelis.

Some 200 young people have participated in the program, including CNN anchor Victor Blackwell, who defended Cummings against Trump’s comments on Saturday.

Blackwell said in 2017 that the Israel program “made me a better man, made me a better journalist, and it gave me some of the most formative experiences and longest friendships of my life.”

Andrew Rehfeld, the president of the Hebrew Union College-Jewish Institute of Religion, also took offense at Trump’s comments. Rehfeld took to Facebook to praise a number of people and institutions — Jewish and not-Jewish — in the district.

“I am a proud graduate of the 7th District’s Baltimore City College High School, a dynamic public high school,” he wrote. “When I went there it was about 85% African American and has produced some of the most important African American leadership in Baltimore and Maryland throughout its 180 year history–paritculalry[sic] since 1980.”

Rehfeld also noted the district’s significant Orthodox population and that it is home to the Associated Jewish Charities, Baltimore’s Jewish federation.