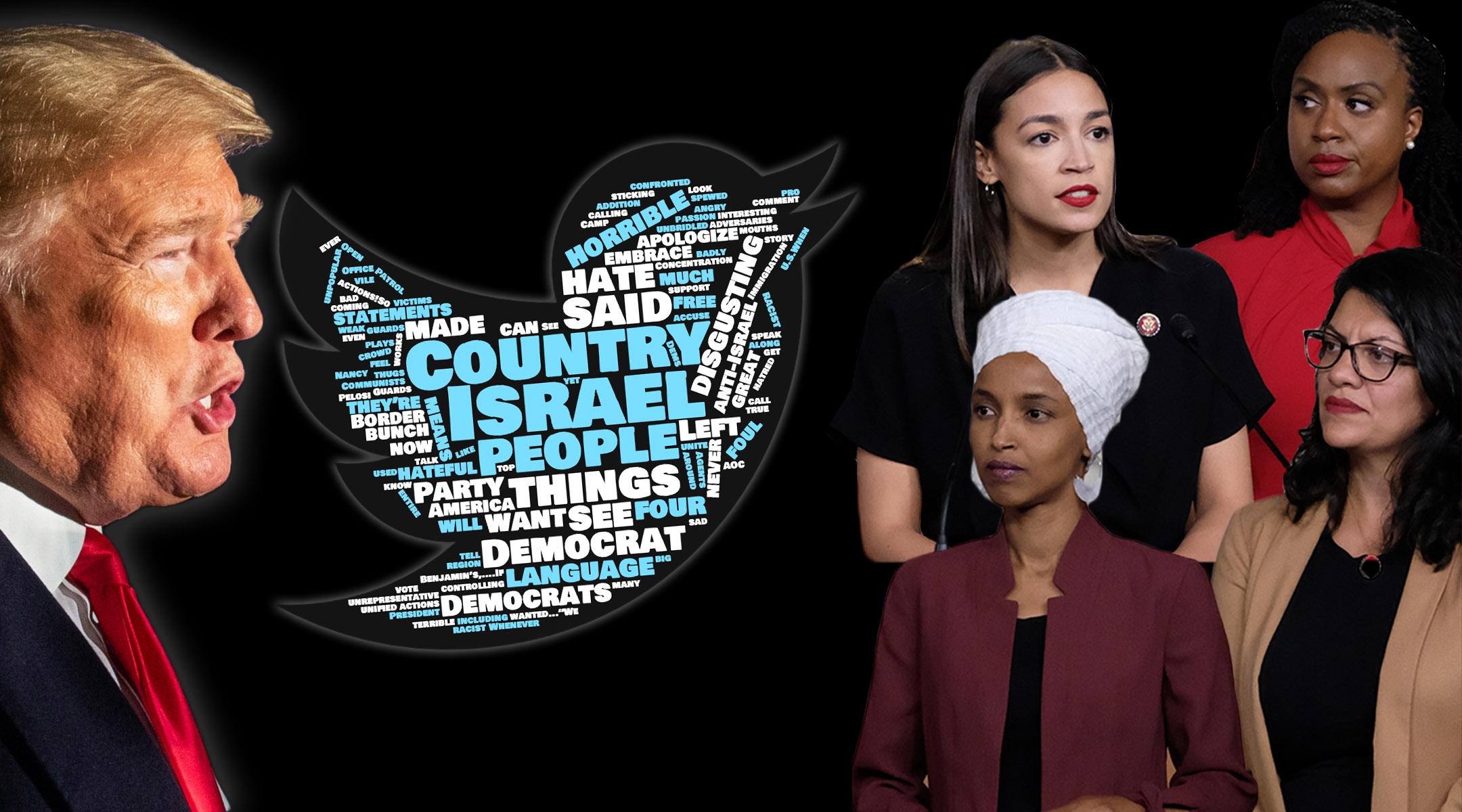 President Trump continues to invoke Israel and the Jews in his attack on four progressive Democrats. (Laura E. Adkins for JTA/Getty Images)
Advertisement

(JTA) — After President Donald Trump called for four Democratic lawmakers — all women of color — to “go back” to the countries “from which they came,” critics widely decried his tweet as racist.

Trump defended his July 14 remarks by saying variously that the four hate the United States, support terrorists, are communists and are destroying the Democratic Party.

But he also put Jews and Israel at the center of both his defense and attack, casting the four Democrats as “anti-Israel” and “anti-Semitic.” Mostly to the dismay of Jewish organizations and lawmakers, with some notable exceptions, he invoked Israel in his Twitter attacks no less than 11 times, along with a few more times in public appearances.

The four congresswomen — Reps. Alexandria Ocasio-Cortez of New York, Ilhan Omar of Minnesota, Ayanna Pressley of Massachusetts and Rashida Tlaib of Michigan — have diverse opinions about the Jewish state.

Tlaib, a Palestinian-American, wants a binational state — anathema to Israel and the pro-Israel community. Omar is a sometimes harsh critic who has apologized for voicing her criticism in terms many called anti-Semitic, but says she supports two states. Tlaib and Omar back the movement to boycott Israel, Pressley opposes it and Ocasio-Cortez has not made her views clear on the issue.

In dozens of tweets since he first called for them “go back” to their home countries, the president rarely has distinguished among the four, although he has singled out Omar for her Israel views.

Here is a timeline of all the times the president invoked Israel in his defense and attacks, and what he said. 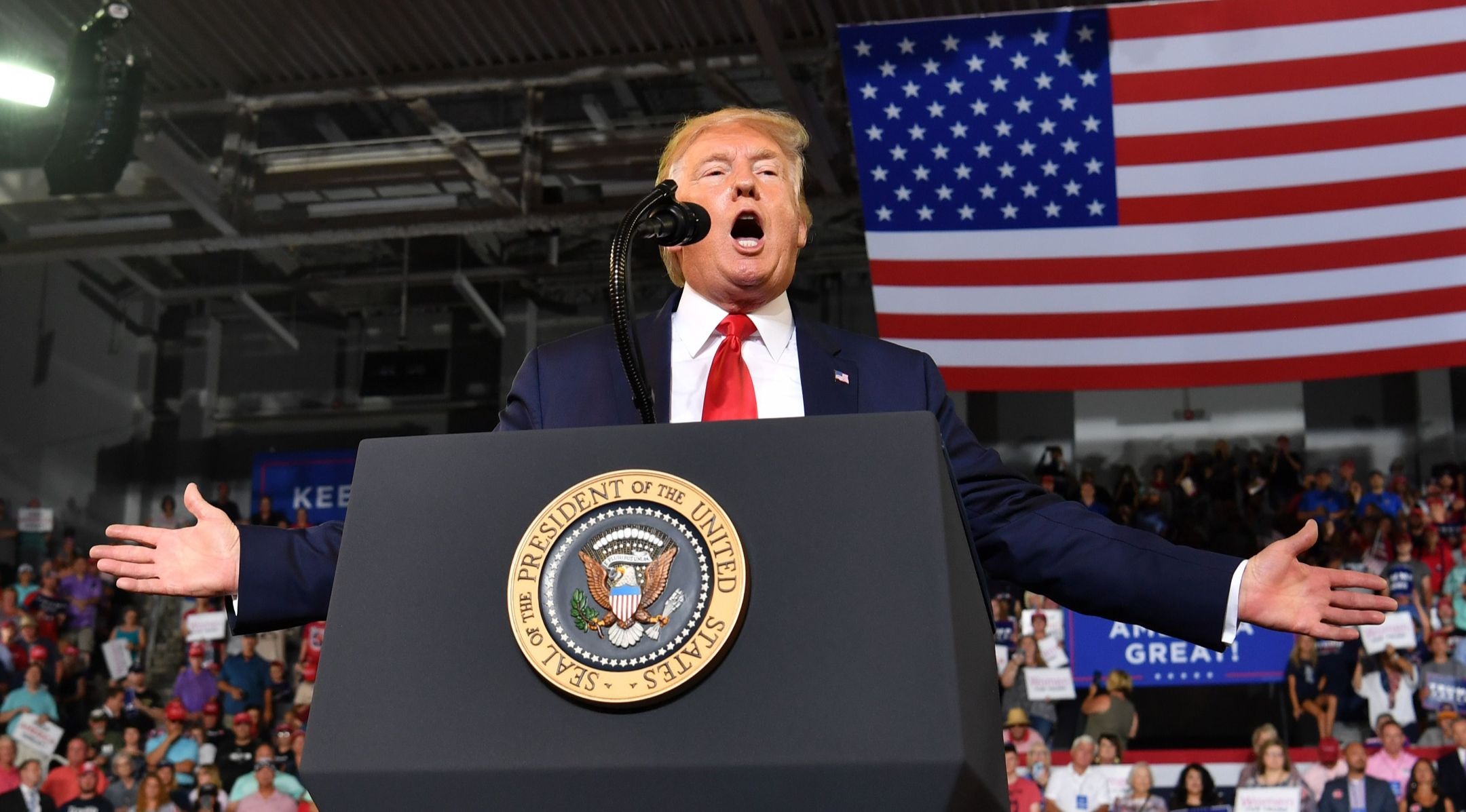 In the morning, Trump tweets a strongly worded attack on the congresswomen, collectively known as “The Squad.”

“Why don’t they go back and help fix the totally broken and crime infested places from which they came,” he writes.

Twelve hours later, following what reports said was concern from his inner circle that the tweet had crossed a line, Trump for the first time invokes Israel in his attack.

“So sad to see the Democrats sticking up for people who speak so badly of our Country and who, in addition, hate Israel with a true and unbridled passion,” he writes.

Trump references the Jewish state in six tweets attacking the congresswomen. He calls on them to apologize to “the people of Israel,” and says “they have made Israel feel abandoned by the U.S.”

In another tweet, he writes that “they accuse people who support Israel as doing it for the Benjamin’s.” That is a reference to a February tweet by Omar in which she used a slang term for $100 bills to suggest that U.S. policy on Israel was distorted by political donations. Many said her comments relied on anti-Semitic tropes about Jewish influence in politics and money.

Trump continues in his criticism, saying the four lawmakers “talk about Israel like they’re a bunch of thugs,” “are anti-Israel” and “hate Israel.” Again, he doesn’t distinguish among his targets.

“The Democrat Congresswomen have been spewing some of the most vile, hateful, and disgusting things ever said by a politician in the House or Senate, & yet they get a free pass and a big embrace from the Democrat Party,” he writes in one tweet. “Horrible anti-Israel, anti-USA, pro-terrorist & public……shouting of the F…word, among many other terrible things, and the petrified Dems run for the hills.”

During a rally in Greenville, North Carolina, Trump targets Omar, saying that she “has a history of launching vicious anti-Semitic creeds.” That statement leads the crowd to chant “Send her back!” The chant and Trump’s delayed reaction to it lead to more criticism. The next day Trump says of the chant that he was “not happy with it — I disagree with it,” and that he tried to cut it short. A video of the event suggests otherwise.

Trump goes on to say that Tlaib “agreed with Omar’s characterization of 9/11 and said that members of Congress who support Israel forgot, what country they represent.”

In April, Omar faced heat from right-wing critics for saying in a speech that “some people did something” in reference to the 9/11 attacks. Omar appeared to be expressing frustration that Muslims were targeted following the attacks because of the actions of a few, and Tlaib said Omar’s remarks were taken out of context. In January, Tlaib argued against a Senate bill targeting supporters of the boycott Israel movement by saying its sponsors “forgot what country they represent.”

People across the political spectrum denounced the chants, and while Trump claims he had not encouraged them, he also takes to Twitter on July 20 to praise the crowd as “patriotic.” 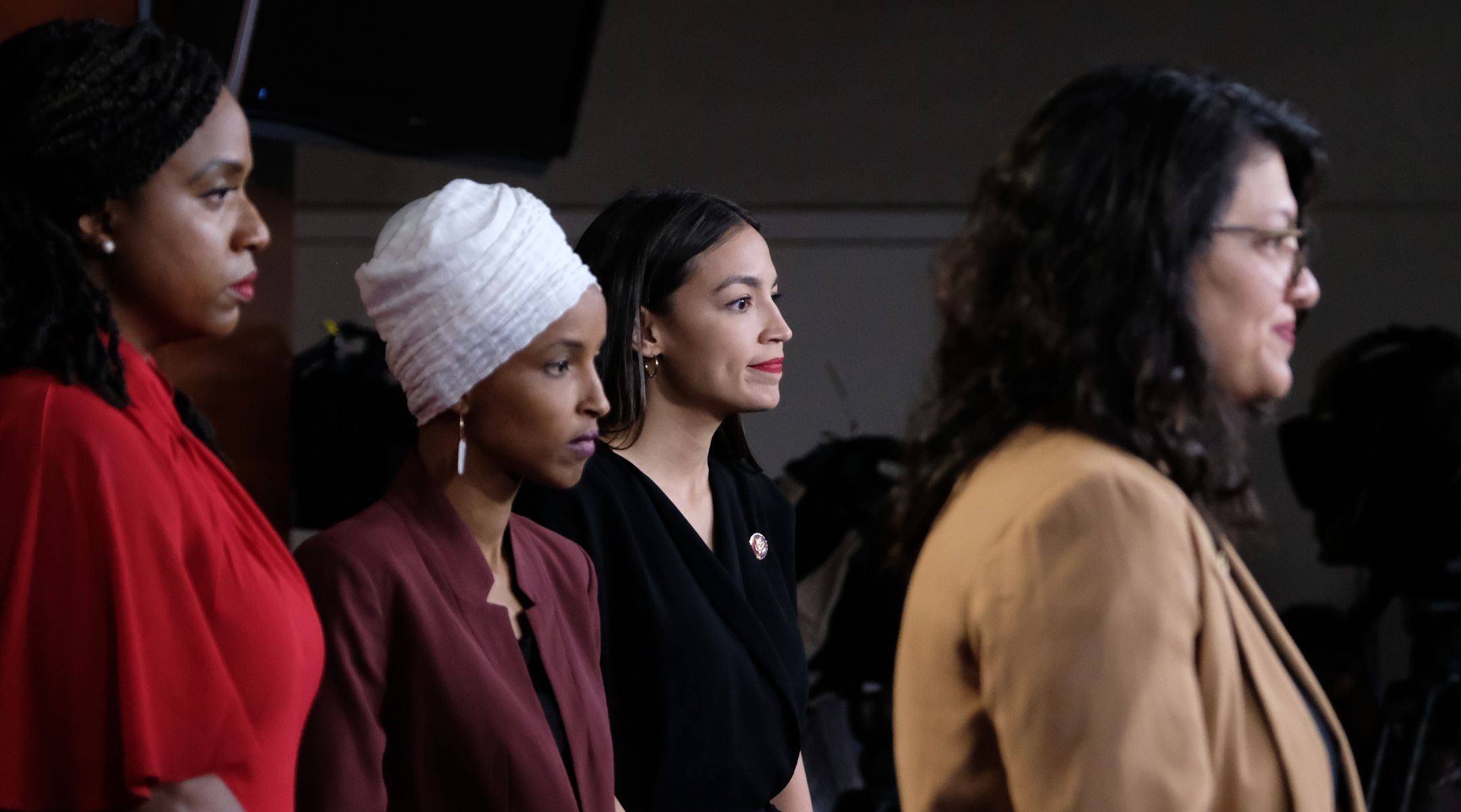 Trump doubles down on his remarks while addressing reporters on the South Lawn.

“[I]f you look at the kind of statements they’ve made about Israel, it’s a disgrace,” he says.

The president goes on to say that the congresswomen were “anti-Semitic” and “talk about ‘evil Jews.'” The congresswomen have not used the phrase, although Omar did in a 2012 tweet refer to “the evil doings of Israel.” She apologized following criticism of the remark.

During an event in the Oval Office, he again attacks Omar.

Contrary to Trump’s claim, none of the congresswomen have referred to the U.S. or Americans as “garbage.” Ocasio-Cortez said in March that moderate policies that are “10% better from garbage shouldn’t be what we settle for.”

Trump calls for the congresswomen to apologize to the U.S. and Israel.

“They should apologize to America (and Israel) for the horrible (hateful) things they have said,” he writes. “They are destroying the Democrat Party, but are weak & insecure people who can never destroy our great Nation!”

The president reiterates his argument that “we have 4 Radical Left Congresswomen who have said very bad things about Israel & our Country!”