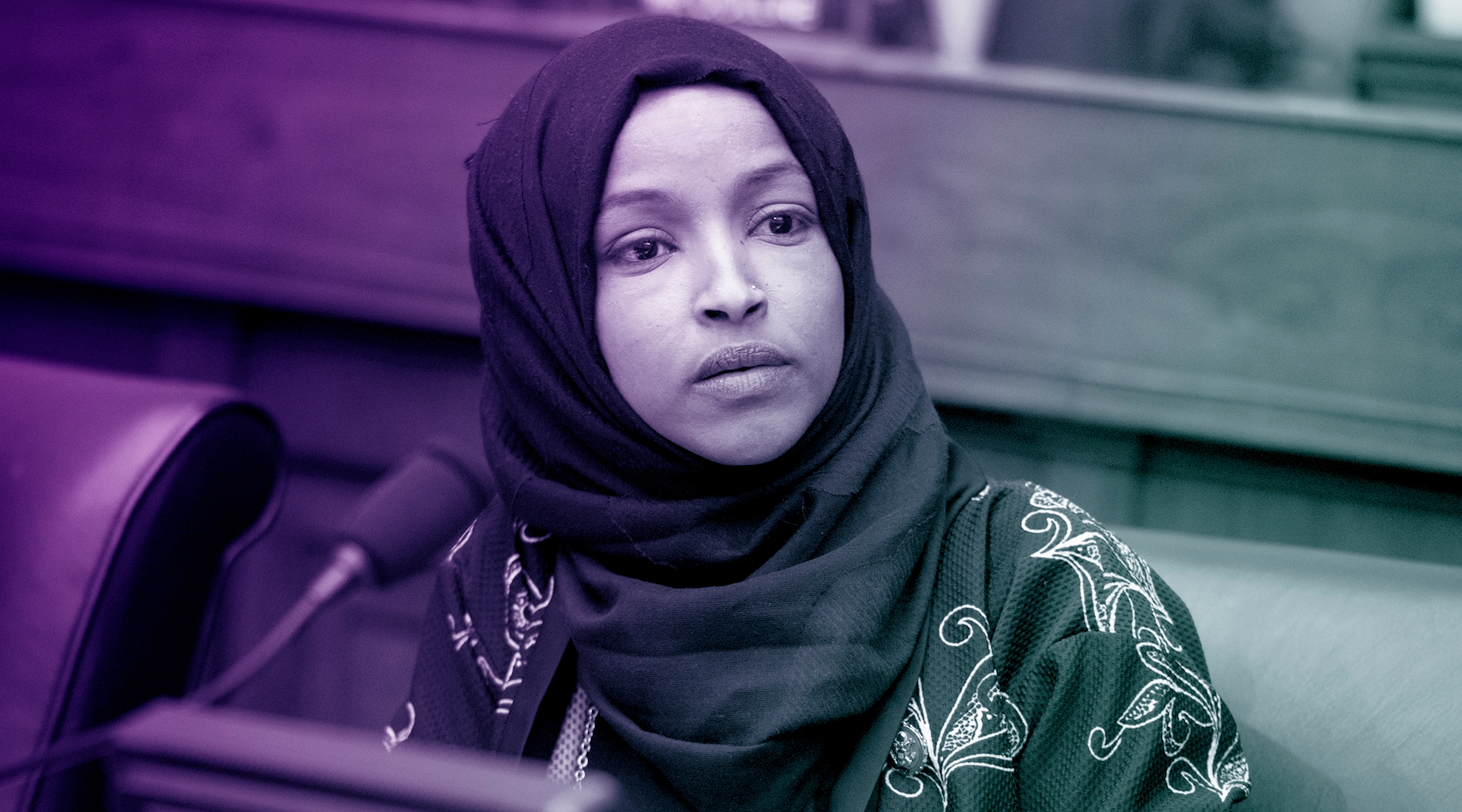 (JTA) — An anti-Semitism scandal surrounding Rep. Ilhan Omar, D-Minn., erupted this week. There are seemingly 10,000 hot takes and think pieces on the matter (we at the Jewish Telegraphic Agency have published our fair share), but let’s break down the “scandal” in simple terms.

What actually happened? Is Omar anti-Semitic? Why does it seem like everyone — from Donald Trump to your grandma — is freaking out over this? Why is Israel involved?

Who is Ilhan Omar?

Omar, a refugee from Somalia, is the newly elected representative for Minnesota’s 5th Congressional District. Her election in November represented a lot of firsts: She was the first Somali-American elected to Congress, one of the first two Muslim women elected, and the first woman of color to represent Minnesota. She’s part of a wave of progressive women legislators elected in the midterms.

Her views on Israel are relevant to the anti-Semitism debate: Omar, more than most of her other freshman congresswoman peers, has come under scrutiny for her positions on Israel, which include support of the boycott Israel movement, or BDS.

In 2012, she tweeted that Israel had “hypnotized” the world, which many thought bought into age-old anti-Semitic motifs. Omar disavowed the tweet last month, writing on Twitter, “It’s now apparent to me that I spent lots of energy putting my 2012 tweet in context and little energy in disavowing the anti-semitic trope I unknowingly used, which is unfortunate and offensive.”

It seems like she’s disavowed her anti-Semitic statements. What’s the big deal?

Less than a month after that apology, controversy reignited on Twitter. Rep. Kevin McCarthy, R-Calif., called for “action” against her and her fellow Muslim congresswoman, Rep. Rashida Tlaib, D-Mich., while being vague on what “action” he wants to take.

Omar then retweeted journalist Glenn Greenwald, a frequent critic of Israel who shared an article about McCarthy, adding the comment, “It’s stunning how much time US political leaders spend defending a foreign nation even if it means attacking free speech rights of Americans.”

Omar wrote six words that would ignite debate: “It’s all about the Benjamins baby,” adding a music note emoji to the end of her tweet.

It's all about the Benjamins baby 🎶 https://t.co/KatcXJnZLV

OK, this just could’ve been a reference to the Puff Daddy song “It’s All About The Benjamins.” Why is it so problematic?

Well, we are so glad you asked! Because that wasn’t the end of the Twitter drama.

The Forward’s opinion editor, Batya Ungar-Sargon, then quote-tweeted Omar’s “Benjamins” tweet, writing, “Would love to know who @IlhanMN thinks is paying American politicians to be pro-Israel, though I think I can guess. Bad form, Congresswoman. That’s the second anti-Semitic trope you’ve tweeted.”

Omar then quote tweeted Ungar-Sargon’s tweet (you still with us?), simply writing “AIPAC!”

And so the controversy began.

Many people began to call out Omar for repeating the anti-Semitic trope that Jews influence governments through money.

Dan Shapiro, former U.S. ambassador to Israel, tweeted: “@IlhanMN’s outrageous comments equating politicians’ support for Israel with being bought off by American Jewish money are a vile anti-Semitic trope. They need to be condemned by all in our party.”

Democratic House Speaker Nancy Pelosi called on Omar to apologize, as did the whole Democratic caucus. Even Chelsea Clinton chimed in.

However, on the other side of the argument, many started arguing that Omar was just pointing out the influence of lobbyists. It has nothing to do with the Jews! Omar notably retweeted Jewish journalist Ashley Feinberg, who wrote, “accurately describing how the Israel lobby works is not anti-semitism.”

Not in theory, no. You can criticize AIPAC without being anti-Semitic.

However, when you focus on AIPAC as the example of money in politics, or link Jewish influence to deep pockets, that’s when it becomes a problem. As JTA Editor-in-Chief Andrew Silow-Carroll pointed out, “Invoking ‘AIPAC!’ as a metonym for the influence of money in politics was a minefield, and the idea that she doesn’t know that by now — coming only a week after she apologized for her 7-year-old ‘hypnotized’ tweet — is implausible.”

The tweet was also technically incorrect: AIPAC is not a political action committee and does not endorse or give money directly to politicians or campaigns. It does signal to supporters who might be worthy of a donation, but its self-described role is to “engage lawmakers directly on the merits and substance of policy.”

As Brent Sasley pointed out in The Washington Post, “Interest groups have always been an important part of the policymaking process in the United States. It is normal, not nefarious, that interest groups lobby Congress, the executive and the bureaucracy to get their priorities on the agenda. Interest groups play such a role on almost every issue, and many of them are highly effective at shaping agendas and votes.”

So, perhaps it was an issue that Omar singled out AIPAC — and for what it’s worth, she apologized, tweeting, “Anti-Semitism is real and I am grateful for Jewish allies and colleagues who are educating me on the painful history of anti-Semitic tropes.”

There are many, many issues, but let’s break it down into three main ones:

1. Anti-Semitism only seems to be a problem when the other side does it.

That’s become a frequent complaint about people on both sides of the political divide. The left says the right only cares about anti-Semitism if a liberal or Israel critic is involved. The right says the left loves to beat up on right-wing anti-Semites but ignores the Jew haters in their midst.

In this case, the left is calling Republicans hypocritical for focusing on Omar. Who is Kevin McCarthy to call out Omar on anti-Semitism, say his critics, when he once accused Jewish billionaires George Soros and Michael Bloomberg of trying to “BUY” the midterm elections? And don’t get them started on Rep. Steve King, R-Iowa, who got away with racially charged anti-immigrant rhetoric for years.

As David Schraub wrote in JTA, “Republicans seem similarly inclined to cast stones at liberals while ignoring the literal Nazi apologists in their midst.”

2. The Democrats may, or may not, have an Israel problem.

Many of the #hottakes coming out of this whole thing have focused on the Democratic Party and the 2020 elections.

As Max Fisher and Amanda Taub wrote in The Interpreter newsletter for The New York Times, “A serious debate over whether the party should recalibrate its position on Israel is all but inevitable. The infighting over Ms. Omar’s tweets, while less about Israel per se than tangential issues of lobbying and anti-Semitism, showed how much anger and distrust this issue can bring out.”

Polls show that younger Democrats are more likely to be critical of Israel’s current government, and even Zionism in general, than the Democratic establishment. Centrist Democrats insist that the party is still solidly pro-Israel, but both Republicans and Israel’s harshest critics insist that Omar represents the “new normal” for Democratic voters and politicians. Many Democrats assert that you can still be pro-Israel and criticize the Israeli government, but they increasingly feel caught in the middle.

3. What about the American Jewish community?

That’s the eternal question, isn’t it?

For many American Jews, it feels like you have to choose between what manifestation of anti-Semitism you fear the most. Is it the newly empowered “alt-right,” rising white supremacy and the increasing number of hate crimes? Or do you fear the growing anti-Israel left, which wants to delegitimize the only Jewish state? Partisan politics makes it feel like American Jews have to choose, when in reality, American Jews can — and do — feel impacted by both. We can be heartbroken over Pittsburgh and frustrated by the leadership of the Women’s March.

And then, there’s the internal politics of being an American Jew, aka the widening split within the liberal American Jewish community regarding Israel, which centers on one question: Is being supportive of Israel still a central tenet of American Jewish identity? Or is being “pro-Israel” — however you choose to define that — becoming a less important part of voting as an American Jew?

If it’s the former, Omar’s comments are deeply upsetting and reinforce the idea that the Democratic Party’s views on Israel are drifting too far left. If it’s the latter (the “Israel isn’t important to me” camp), then Omar is simply representing the progressive view of the pro-Israel movement and being unfairly criticized for it.