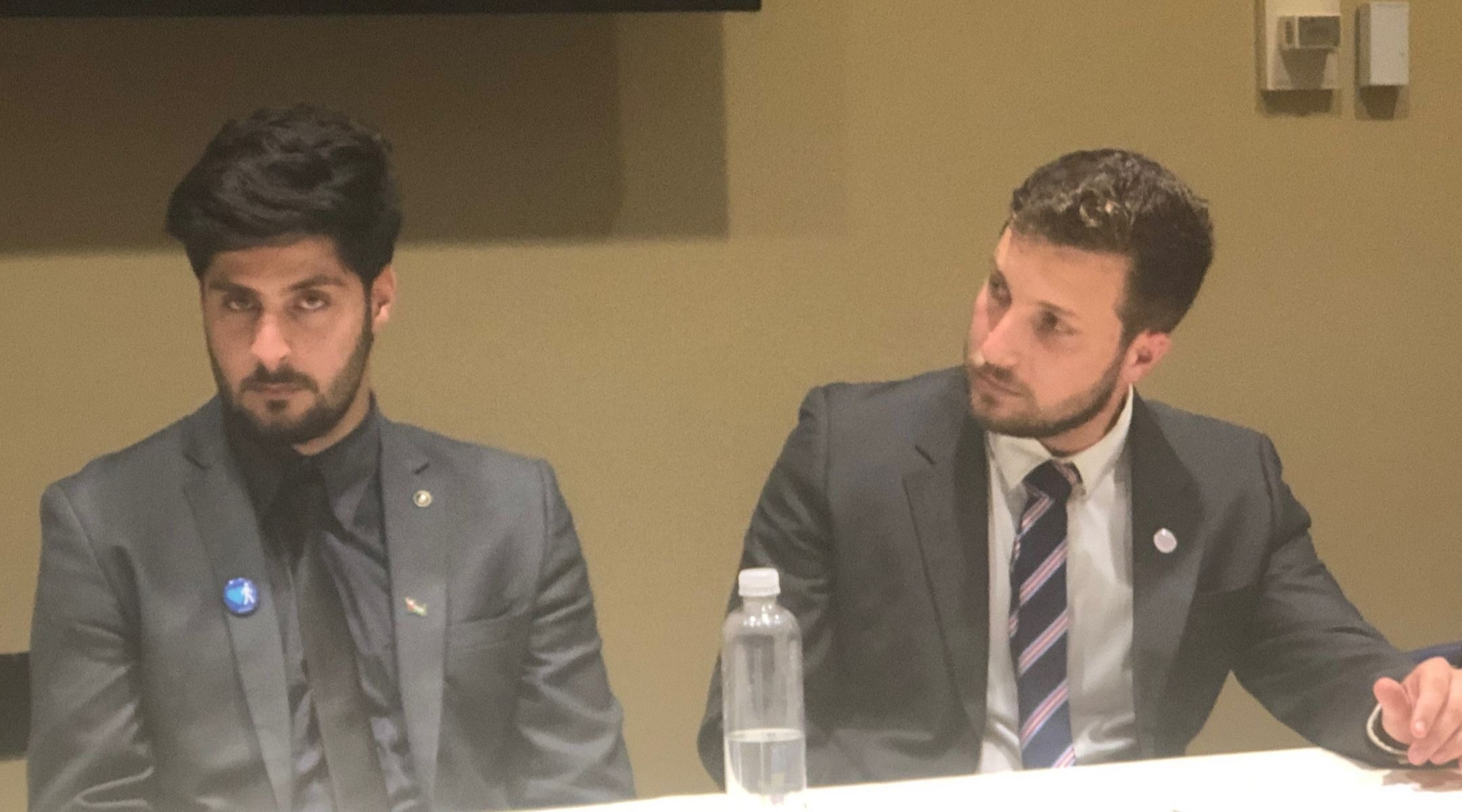 WASHINGTON (JTA) — In its 10 years of placing young Palestinian and Israeli leaders with Congress members, no lawmaker asked New Story Leadership for one of each — until Jamie Raskin did.

This summer, Eran Nissan and Mohammed Ahmad have been interning in the office of the Maryland Democrat, bonding over constituent work.

No one knew until well into the summer, however, that the two young men had a deeper connection than they realized: When Ahmad described the unsettling nightly intrusions by Israeli troops and their trained search dogs into his West Bank village, Azzun, it dawned on Nissan that he had led such patrols while Ahmad lived there.

That Nissan and Ahmad became friends thrilled Raskin, who since his 2016 election has made a name for himself among Congress members for encouraging Israeli-Palestinian reconciliation — the reason why he asked for one of each. (Raskin also brings on an unusually high number of summer interns, with over 30 in his offices and another 100 attached to Democracy Summer, a social justice program.)

“That’s a really wonderful byproduct of this program,” Raskin said in an interview, referring to the friendship between Ahmad and Nissan. He made time to have lunch with the two men toward the end of the internship.

Nissan, who in Israel is employed by Peace Now, was politically savvy, while Ahmad, who is pursuing a master’s degree in teaching English, had been shielded from politics by his parents because of their belief that political activism poses dangers for West Bank Palestinians.

“Mo, as I understood it, was not politically engaged, his family tried to keep him away from politics,’ Raskin said of Ahmad. “It was moving to me — Mo had never been to the United States before. He said it was a dream to get to work in the U.S. Congress.”

Raskin, whose parents were prominent in the civil rights movement, routinely brings Palestinians and Israelis into his office to work together on business or nonprofit ventures, in part to show his staff that it can be done.

“I’m a middle child and I’m always drawn to the efforts to bring people together,” the lawmaker said.

Earlier this year he spearheaded a closed-door meeting between Jewish Democrats in the caucus and Reps. Rashida Tlaib of Michigan and Ilhan Omar of Minnesota, two Muslim congresswomen who back the Boycott, Divestment and Sanctions movement targeting Israel.

“It’s easy enough to figure out reasons why one group hates another,” Raskin said. “The real challenge is to find common ground to build a positive future.”

That thinking, he said, informed his vote, as a progressive, for the recent nonbinding resolution condemning the BDS movement.

“We need not mutual boycotts and hostility but rather engagement and organizing and common work,” said Raskin, a professor of constitutional law. “I’m the academic, and I’ve always been opposed to the idea we’ll make progress by isolating ourselves from each other.”

New Story Leadership, funded mostly by small donations from the Virginia-Maryland-D.C. area, has graduated about 100 interns over the past decade, all placed with Democrats, despite what its director, Rawan Odeh, said was a concentrated effort to bring a Republican on board. One prominent GOP member was set to bring on an intern this summer, she said, but backed out at the last minute because of the optics of buying into a dialogue program at a time when the Trump administration has cut funding to the traditional coexistence programs.

It’s modeled on an older Ireland-Northern Ireland program that has produced at least one famous graduate: Leo Varadkar, Ireland’s taoiseach, or prime minister. Odeh, perhaps quixotically, entertains similar hopes for the Israeli-Palestinian program, noting that alumni stay in touch helping to select interns and running a number of programs in Israel. One of the programs is a monthly yoga studio that brings Israelis and Palestinians together in Beit Jallah, the village between Jerusalem and Bethlehem.

“We tend to get the more left-wing Israelis, those who have an awareness and understanding of what the occupation presents to the Palestinian people,” Odeh said.

Participating lawmakers who were able to take time out from a busy voting night on the Hill lavished praise on their interns; among them were Tlaib and Omar. The Palestinians, particularly, were smitten with Tlaib, whose family is from the West Bank.

“For the first time in my life, I could see someone who looks like me, who talks like me, who is me, in power,” said Thawra Abukhdier, an intern from Jerusalem.

Ahmed and Nissan bonded as interns, taking on the tasks expected of congressional interns: the stimulating (attending the plethora of briefings that fill up the summer calendar) and the less so, like answering constituent calls, where they encountered curiosity about their accents.

Nissan recalled a meeting with a delegation from Christians United for Israel, a group that supports the most hawkish of Israeli policies, a considerable distance from his own political views.

“It was fascinating to hear how people talk about the conflict,” he said.

It was during preparation for the Capitol Hill event that Nissan and Ahmad discovered their deeper connection.

“We went around the room and introduced ourselves,” Nissan recalled at that session. As Ahmad recounted his story of nightly raids, Nissan realized that “I was that soldier dozens of times.” Israel says such raids are necessary to defend Israeli civilians and catch those who try to harm them.

“Eran told me he might have been one of the soldiers behind the doors,” Ahmad recalled. Azzun is a village near Qalqilya in the northern West Bank.

An audience member at the Capitol Hill event asked Ahmad, inevitably, how did that make you feel?

“Being angry is not the solution,” he said.