‘We’ve lost a part of ourselves’: El Paso’s diverse Jewish community grapples with a mass shooting 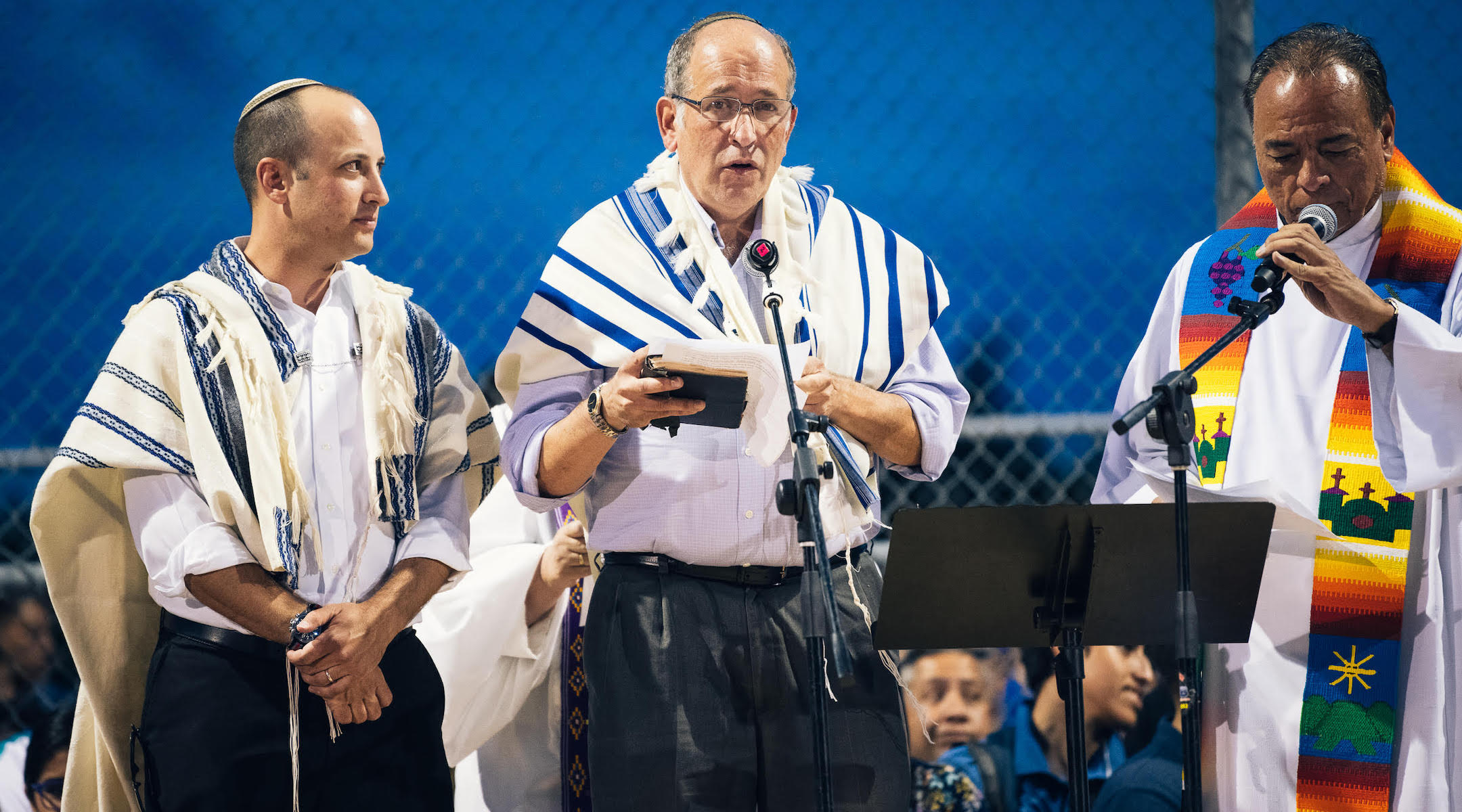 (JTA) — Joseph Charter used to feel safe in El Paso. But after Saturday, when a gunman killed 22 people and injured 26 at a Walmart store in the Texas city, everything changed.

“I had to go to Target the following day, and for the first time ever I kind of looked around,” he told the Jewish Telegraphic Agency in a phone interview Wednesday. “You have to start second guessing and be a little more cautious.”

His wife, Fabiola, feels especially vulnerable. She is Mexican American, and the suspect, Patrick Crusius, is believed to have posted a manifesto prior to the shooting in which he railed against immigrants and Latinos. A relative of Charter’s ex-wife was among the victims, and one of his co-workers was there during the attack but managed to escape.

His wife feels “a little more self-conscious about ‘I’m Mexican and there are people here who do not welcome me here,’” said Charter, who is Jewish.

He said the shooting has sparked new discussions with his wife.

“[S]he has now talked about ‘I want to get a gun. I don’t feel safe. I want to make sure if I was ever put in that situation I would have at least some means to try to protect our children,’” he said.

Charter, 33, and his wife belong to the city’s Reform synagogue, where they are one of many Latino-Jewish couples.

“A lot of the families at Temple Mount Sinai include people who have chosen Judaism, who were local people and fell in love with Judaism as they were falling in love with a future spouse, and it includes a lot of interfaith families as well,” said the congregation’s rabbi, Ben Zeidman.

There are approximately 5,000 Jews in El Paso, and even for those who do not have Latino family members, the shooting hit hard. The Jewish community is close with the Latino community, which makes up 80 percent of the city. Members mix socially and at interfaith events.

“There’s this feeling like we’ve lost a part of ourselves in a way because of what our city is and how we relate to everybody else who is here,” Zeidman said. 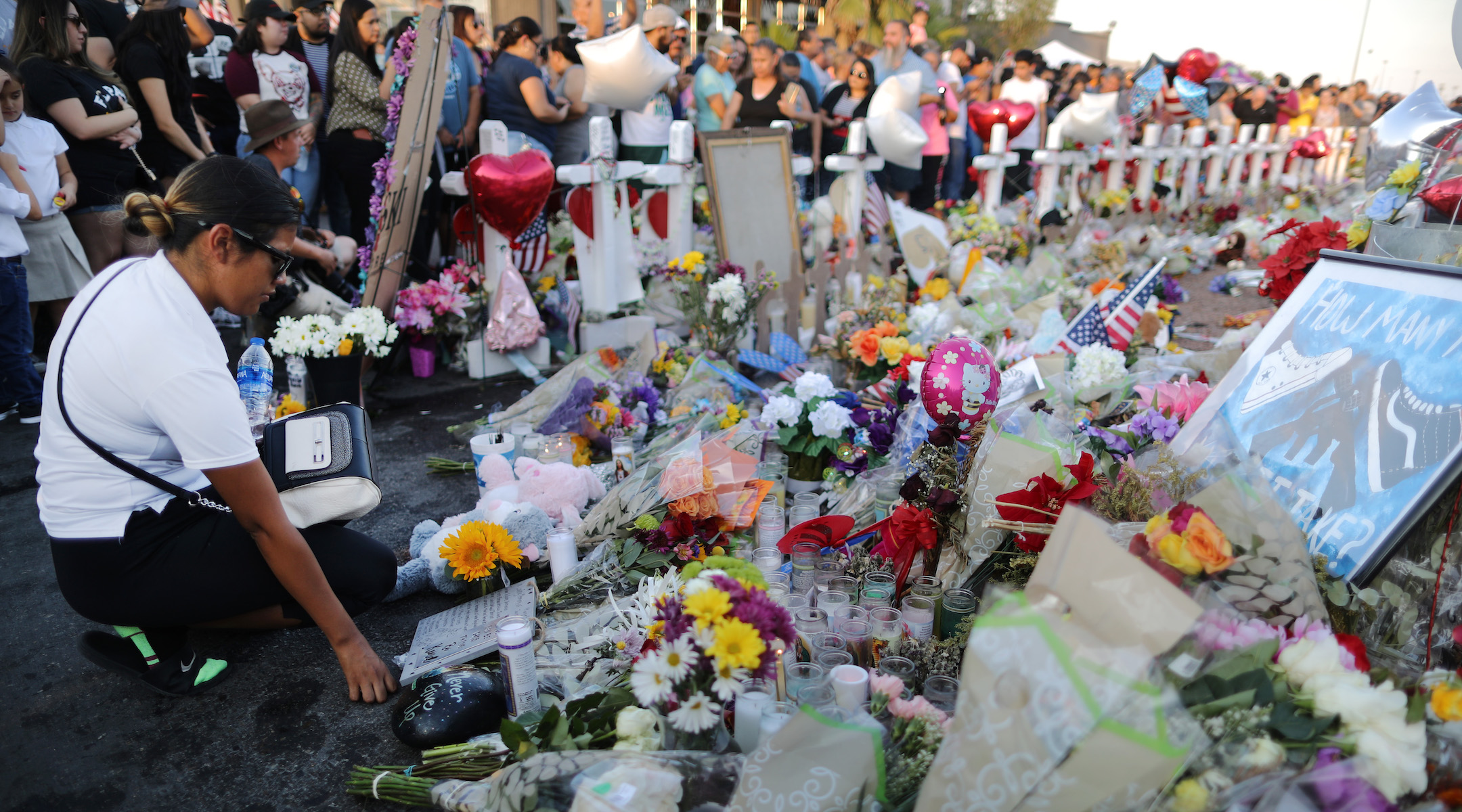 People gather at a makeshift memorial honoring victims outside the Walmart in El Paso where the shooting took place, Aug. 6, 2019. (Mario Tama/Getty Images)

The rabbi helped organize an interfaith vigil the night after the shooting. He represented the synagogue alongside Rabbi Scott Rosenberg of B’nai Zion, the city’s Conservative congregation. Temple Mount Sinai’s choir sang as part of the musical prelude.

The Reform synagogue, which has nearly 400 member households, is also raising money to distribute to victims and their families.

El Paso is also home to a Jewish federation, a Chabad house, a Jewish preschool and a Holocaust museum.

“Historically, there’s been a close relationship between the Jewish community and the Hispanic community,” said Stephen Leon, rabbi emeritus of B’nai Zion, which has 250 member families.

Leon was at the mall where the shooting took place just three days earlier with his wife and grandchildren.

“You just say — without being cliché — just for the grace of God that could’ve been us,” he said.

Like the Reform synagogue, Leon’s congregation is diverse. Twenty to 25 percent of the congregation is Latino — mostly families who grew up Catholic but discovered they have Jewish roots.

Since arriving in El Paso in 1986, Leon has been active in reaching out to people in the local Hispanic community who believe they are the descendants of conversos, Sephardi Jews who were forcibly converted to Catholicism during the Spanish Inquisition.

It all started days after he arrived in the city for the first time, when a man from the nearby city of Juarez, in Mexico, sought him out to tell him about a peculiar family custom: His grandmother would light candles every Friday night and say a prayer in a foreign language.

That week, two others approached Leon with similar inquiries. It turned out they had Jewish heritage. In all, Leon says 70 families have returned to Judaism through his work. Most live in El Paso, although some are in nearby towns or in Mexico.

“This has become my passion,” the rabbi said.

Charter said the tragedy has united the city.

“I’m used to having a very close-knit support system in the Jewish community,” he said. “And now I’m seeing it as a greater El Paso community.”