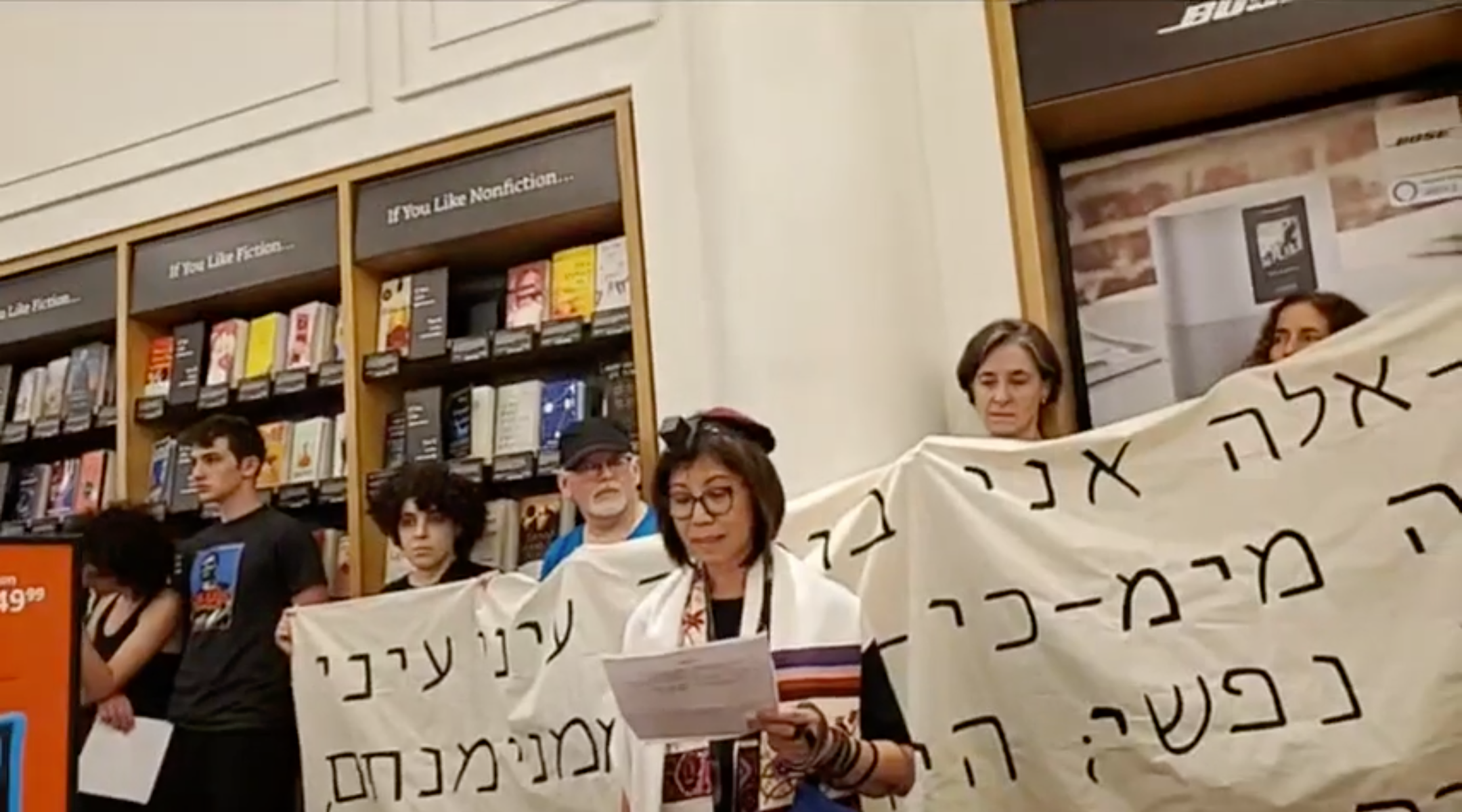 Rabbi Mira Rivera of congregation Romemu speaks at a Jewish protest against Amazon at one of the company's brick-and-mortar stores in New York City, Aug. 11, 2019. The protest was held on Tisha B'Av, a traditional Jewish day of mourning. Behind the speaker is a banner with a Hebrew quotation from the Book of Lamentations. (Screenshot from Facebook video)
Advertisement

Sunday’s protest was one of more than 50 similar Jewish demonstrations that were held across the country to mark Tisha b’Av, the traditional Jewish day of mourning, in opposition to U.S. immigration policy. A range of progressive Jewish groups organized the protests, which also took place in several other major cities, including Washington, D.C., Chicago and Los Angeles.

There were no arrests at the other venues, according to T’ruah, the liberal rabbinic human rights group that was among the protest organizers.

The protests are the latest in a series of direct actions by Jewish groups against the immigrant detention centers in the United States. The protests, in many cases organized by a new group called Never Again Action, draw explicit links between the Holocaust and the treatment of undocumented immigrants today across the country.

In New York City, more than 1,000 demonstrators crammed into a brick-and-mortar Amazon store to protest the tech giant’s contract with ICE, which uses Amazon technology. The protesters held a large sign that read “Never again means never again” and, with most of the protesters sitting on the floor of the store, read accounts of people detained in immigration facilities.

The protesters were eager to draw a connection between their cause and Tisha b’Av, which commemorates a range of Jewish historical tragedies, including the destruction of the First and Second Temples in Jerusalem thousands of years ago. Some protesters wore prayer shawls and tefillin.

They recited Kaddish, the traditional mourner’s prayer, sang a melody traditionally used in Tisha b’Av liturgy and read from the Book of Lamentations, which is traditionally read on Tisha b’Av. Some held up a large banner with a Hebrew quotation from the book, which translates to “For these things do I weep. My eyes flow with tears: Far from me is any comforter who might revive my spirit; my children are forlorn, for the foe has prevailed.”

Along with T’ruah, other protest organizers included the refugee aid group HIAS, the National Council of Jewish Women and the activist group Bend the Arc.

“We are turning our grief into action and taking to the streets to demand that tech companies stop enabling the deportation machine terrorizing immigrant communities, separating families, and putting children in cages,” tweeted Jews for Racial and Economic Justice, a left-wing Jewish group that co-sponsored the New York protest.

We are turning our grief into action and taking to the streets to demand that tech companies stop enabling the deportation machine terrorizing immigrant communities, separating families, and putting children in cages.#JewsAgainstICE #NoTech4ICE #NeverAgainIsNow #ClosetheCamps pic.twitter.com/X9gAjsHdQz

For months, progressive activists have been calling on Amazon to cut its ties to the immigration agency. In a statement last month to The Washington Post which is owned by Amazon founder Jeff Bezos, Amazon said it has “provided a proposed legislative framework” for how governments can responsibly use its artificial intelligence technology.

One of the protesters arrested at the New York demonstration was a Jewish city councilman, Brad Lander. In a series of tweets, Lander compared the Amazon protest to the White Rose movement in Nazi Germany, which opposed the country’s persecution of Jews.

“Knowing the risks, they distributed flyers pleading with their fellow Germans to see the atrocities being committed by their government against Jews,” he wrote.

Comparisons between the Holocaust and U.S. immigration policy have touched a nerve within the American Jewish community. Some, including the protesters, believe it’s their duty as Jews to invoke the Holocaust while opposing injustice. Others say the Holocaust was not comparable to the situation in the detention centers, and that using phrases like “concentration camp” and “Never again” trivializes the Holocaust.