Jackie Tohn tells us all about that seder scene in ‘GLOW’ 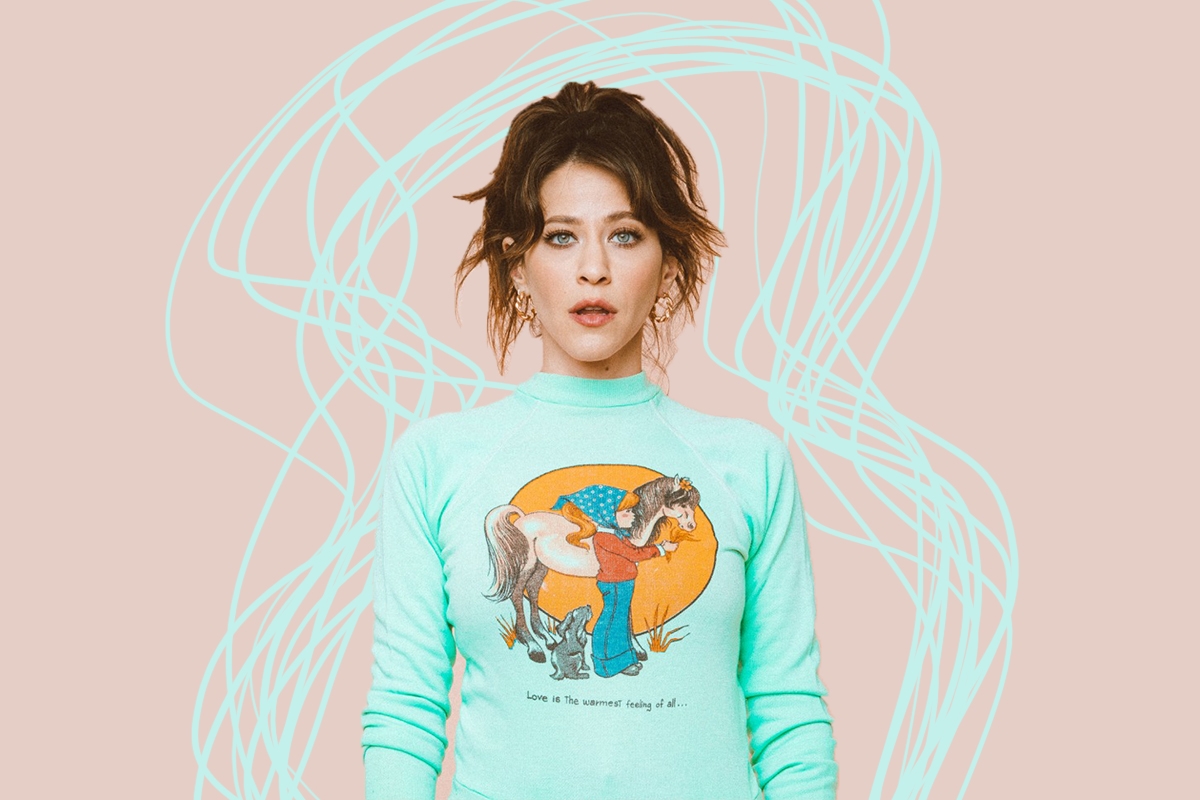 Jackie Tohn recalls her family's Holocaust past in an extraordinary scene on her Netflix show. (Sela Shiloni)
Advertisement

In the sixth episode of the newly released third season of “GLOW,” there’s an unconventional seder in the Nevada desert. It’s led by Melrose — played by Jackie Tohn — the Jewish party girl who talks the group through the 10 plagues, the four children and the entire story of Passover.

Toward the end, Jenny (played by Ellen Wong) gets up from the campfire and criticizes Melrose, saying “You’re just talking about yourself and pretending it relates to everyone else.”

They get into a discussion about the meaning of Passover (on Netflix! In 2019! What a world!). Someone mentions how Jews in slavery happened “a bajillion years ago.” Jackie says it’s still very recent, referencing the Holocaust. When folks get uncomfortable, she snaps back: “Why, you’d rather I just joke around? Just jokes, huh? Not really get into the trauma that’s behind all the shit we don’t want to talk about? How my Aunt Pessel and her eight children died in Treblinka? Or how my dad, my dad, won’t live in a house without a basement or an attic in case we have to hide again?”

Jenny then quietly chimes in about how her family fled the the Cambodian Killing Fields.

“I understand what it’s like to survive a genocide, and not want to talk about it all the time,” she tells Jackie.

This scene was remarkable: a conversation about shared trauma, Jewish history and how the story of Passover is still deeply relevant and applicable today. And it’s made all the more powerful by the fact it was based on the real lives of Wong and Tohn.

We chatted with Jackie about that seder scene, playing Melrose in general and her role as Gilda Radner in another Netflix production.

Alma: OK, let’s talk about *that* seder scene in episode 6.

Tohn: It’s a crazy thing. Who gets to do that? It’s unreal. It’s so rare for an actor — a Jewish actor — to get to honor and memorialize her family in that way. I mean, it’s unheard of. And to get to do that in a time where history is repeating itself, a little bit, on our soil is powerful and shocking and terrifying all at the same time. It’s a heavy thing that I got to talk about my family’s history and inherited trauma from the Holocaust on television. It’s making me tear up right now. It’s an honor.

It happened at a perfect time in my life, too. Cause I think if I was younger, I’d [hesitate]: I don’t know, this is heavy, I’m a comic, can I just be funny?! As I’ve gotten older, I’m sort of shedding that mask of I’ve got to be funny all the time. I think Melrose and I have a lot in common: We’re funny ’cause of the pain.

Can you talk about the origin of the seder scene?

It came from me and Ellen Wong actually discovering that [connection] in real life. We weren’t at the same seder. We were just talking about Passover and the seders we went to. I was saying, it’s heavy being a second-generation survivor. And then Ellen was talking about the Cambodian genocide and her family, and we were shocked.

Sascha Rothchild — one of our writers/executive producers who created Melrose, and who Melrose is based on — was moved by mine and Ellen’s story. As they do on “GLOW” often, [they] write our truths into our script. So in episode 6, our writers were talking about the similarities between Jenny and Melrose. These [are] two best friends who have very different backgrounds but shocking inherited trauma in common that they didn’t know about.

I was so shaken and moved. I called my mom and said, “Do you think it would be OK if I asked our writers if we could memorialize your Aunt Pessel?”

Aunt Pessel was the only child in my grandma’s family who was killed by the Nazis. My great-grandparents and my great-aunt Pessel did not leave Poland in the late ’30s, and they were all killed. The rest of the kids in the fam

ily ran anywhere they could and somehow survived. Many of them [survived] concentration camps, staying one step ahead of the Nazis.

You know the stories. Being in a bread line, and a Nazi coming up to my grandpa saying, “Hey, why are you in the Jew line?” My grandpa spoke perfect German and said, “Oh, my mistake,” and went to the German line. And that’s one of a hundred stories, how he wasn’t just murdered on the spot.

Anyway, I asked my mom if she thought that would be OK, and she liked the idea, and I asked the writers, and they were like, absolutely. So we changed the name to my actual aunt’s name.

What has the reaction to this scene been like for you?

It has been overwhelming. My mom’s cousin Bracha — whose mother is one of the last remaining Holocaust survivors in the world, let alone in our family — texted me yesterday. She said, “Good morning Jackie, we are so proud of you. In the name of all the Levental offspring, thank you … We Jews were not eliminated and we second generation are blooming and multiplying. Look at your cousin in Canada; they have seven great-grandchildren and another on the way. L’chaim.”

In some Jewish Facebook groups I’m in, people are posting, “Did you see the seder scene in’ ‘GLOW’?” I think it’s really resonating with an audience.

I think so, too. It’s just so extra special. Especially how ragtag they do [the seder], popping the hubcaps off the limo. It’s so heartwarming. And character-wise, aside from how powerful the message is, and how meaningful it is to me to be a Jewish woman getting to talk about Jewish history, it’s so nice to see Melrose grow and not just be this sort of snarky wiseass. Which she still is, because Jews are!

Melrose is a key part of Jewish representation on TV. And you know, a lot of people have feelings about how only Jewish actors should play Jewish characters. What do you think about this?

The representation debates are interesting because I myself want to be able to play a character that goes to church. Like, of course I want to do that. I’m an actor! I want to be able to play that role. But I think, for myself as an actor, it’s quadruply meaningful when I get to play someone whose story lines up with my family’s story. That’s obviously going to be more meaningful to me. But it’s funny because I feel like when I see someone playing a very Jewish character, and they’re not Jewish, I can tell.

How did you get cast in “GLOW”?

It’s a pretty cool story. Before “GLOW,” I was not very busy as an actor. It was a really exceedingly slow time in my acting career. They had seen everyone in the whole city to play Gilda Radner for this David Wain Netflix movie [“A Futile and Stupid Gesture”]. Gilda’s my hero, and we have very similar speaking voices, both Jewish lady comics, the whole thing.

I overdid it on the Gilda audition; I had multiple costume changes, I brought a guitar, I wrote a song. I went in. And it could have gone either way. They could have been like, “Oh, that’s embarrassing, that girl just tried way too hard,” or it could have gone how it went, which they were like, “Whoa, where’s this girl been hiding?!” And I’m like, in my apartment with no opportunities! I can’t remember the last time I had worked before the Gilda thing.

Anyway, I only bring up the Gilda story because Allison Jones cast that movie, and her protege, who she brought up in casting, is this woman Jen Euston who cast “GLOW.” When Allison saw me for Gilda, she sent my tape to Jen. And then, when Jen was casting “GLOW,” she was like, “I’m bringing in that girl that played Gilda, and we’re getting her on ‘GLOW.'” I got into a global audition; I read Ruth a bunch, I read a little bit of Sheila, a little bit of Jenny.

So how did you end up as Melrose?

I think for Melrose, they initially wanted a more classic party girl — blonde hair, blue eyes, Paris Hilton, that whole thing. And then I brought this little tilt to it. You’ll love this, being from the publication you are from, as much as I do: When I tried out, the character’s name was Melrose and that was short for Melanie Rose. Once they [cast me], they made Melrose short for Melanie Rosen. They were like, “Uhhh, she’s Jewish. Let’s talk about it!”

So after they cast you, they decided to write her Jewishness into the story?

OK, but back to Gilda. What was it like playing her?

It’s one of the stories that I feel like people read in a magazine and they’re like, yeah right. But [as a kid] I played the “Gilda Greatest Hits on SNL” VHS until it broke, and I wasn’t able to get it again until eBay was invented. And that’s just a true story from my childhood. I was definitely watching it younger than I should have, but a lot of the stuff she was doing was obviously over my head in that debaucherous ’70s comedy way. With Gilda, the movie takes place before she was on SNL. They [told me], you can do some of the characters from SNL just to show us that you can, but it’s not going to be in the movie. But, I did every character for the audition. It’s funny because as much as I idolized her, I never tried to do the characters, they just came right out of my face. And it shocked even me!

But I love Gilda. My heroes are Bette Milder, Joan Rivers, Gilda Radner and Howard Stern. When I got that audition, I never wanted something so bad in my whole career. It’s really rare when you get an opportunity, and in your brain, you go: “They may not cast me, but this one is mine.” Even with “GLOW,” I didn’t necessarily feel that at the very beginning because I had to make Melrose mine. Now she’s so clearly me and so clearly the things I say and do, and our writers and creators are so incredible at catering to our strengths. They make us look incredible.

You also played Fran Drescher’s cousin on “The Nanny.” What was that like?

I’m keeping on brand! I auditioned to play a mini Fran in the mid to late ’90s on “The Nanny.” I sent my tape in from New York, and I was like [Fran Drescher voice] “Mr. Sheffield …” I was very little. I was 12.

Last but not least: What’s your ideal bagel order?

This interview has been lightly edited.