At this Florida Jewish day school, half the students aren’t Jewish 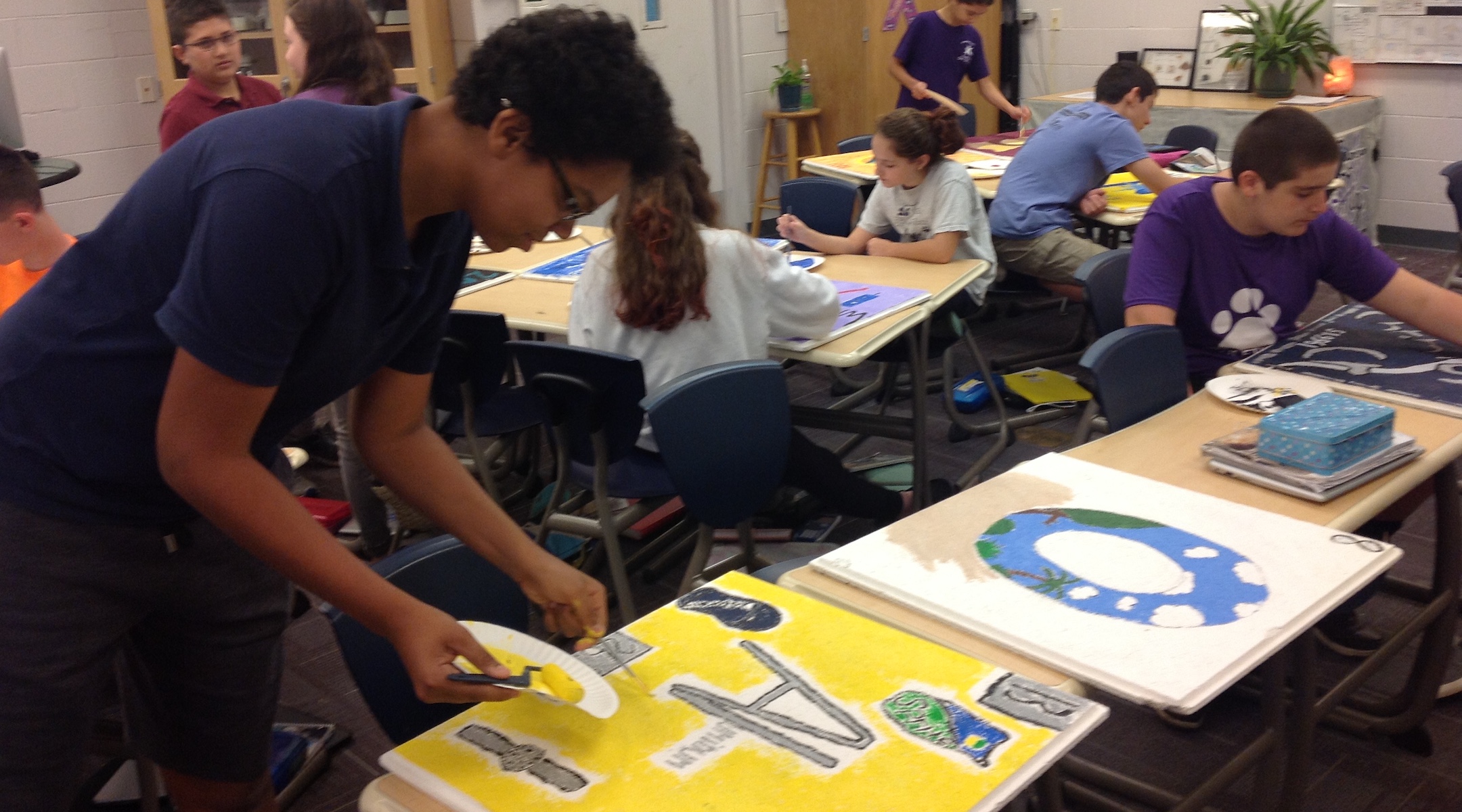 SARASOTA, Florida (JTA) — Most American Jewish day schools go all in on Hanukkah, in part to remind their students that Jews have a winter holiday of their own.

But when December rolls around at the Hershorin Schiff Community Day School in southwestern Florida, you’re almost as likely to see kids drawing Christmas trees as menorahs or dreidels. That’s because the school asks its students to design their own holiday plates — and almost half the students at this Jewish day school are not Jewish.

“Even though we only teach about Hanukkah, if they say, ‘we’re excited that we have a Christmas tree and a menorah in our house,’ if it’s important to our kids, we’re going to honor that and create a space for them to share that,” said Dan Ceaser, the head of school. “So while we’re teaching our Jewish traditions, we are creating a space for families to share their traditions and we are honoring those as well.”

The school has always been open to non-Jews, but it began emphasizing that inclusiveness — including a mission statement welcoming “children of all faiths” — when Ceaser, in his first job at a Jewish school, came on in 2015. Since then, Community Day’s enrollment has more than tripled, from 67 students in 2015 to 275 in the upcoming school year. It has students from preschool through eighth grade in a city with about 20,000 Jews.

The school is trying to strike a balance between teaching Jewish values, culture and practice on the one hand, and remaining inclusive on the other. In addition to its Judaism, the school appeals to families by emphasizing its diversity (students’ families hail from 40 countries) and a philosophy of independent, project-based learning.

The school is explicitly trying to serve as a model for other Jewish day schools as non-Orthodox Jewish schools struggle with rising costs and declining affiliation. Another experiment in pluralistic Jewish education, the American Hebrew Academy boarding school in North Carolina, closed abruptly this year, citing financial challenges.

For more than a decade, Hebrew-language charter schools have pursued a similar model. They’re open to students of all faiths and backgrounds and, in order to accept public funding, emphasize Israeli culture, not religious identity. What sets the Sarasota school apart is that, unlike charter schools, it is explicitly Jewish. Students pray, eat kosher-style food and celebrate Shabbat. Tuition is on a sliding scale, but averages $9,300 per child.

“The best way to fight anti-Semitism and injustice is not just to educate Jews but to educate non-Jews about the importance of advocating for all,” Ceaser said. “We welcome you as you are and we’ll celebrate what you bring to us. That’s in terms of faith, affiliation, culture, ethnicity, families that identify as non-traditional.” 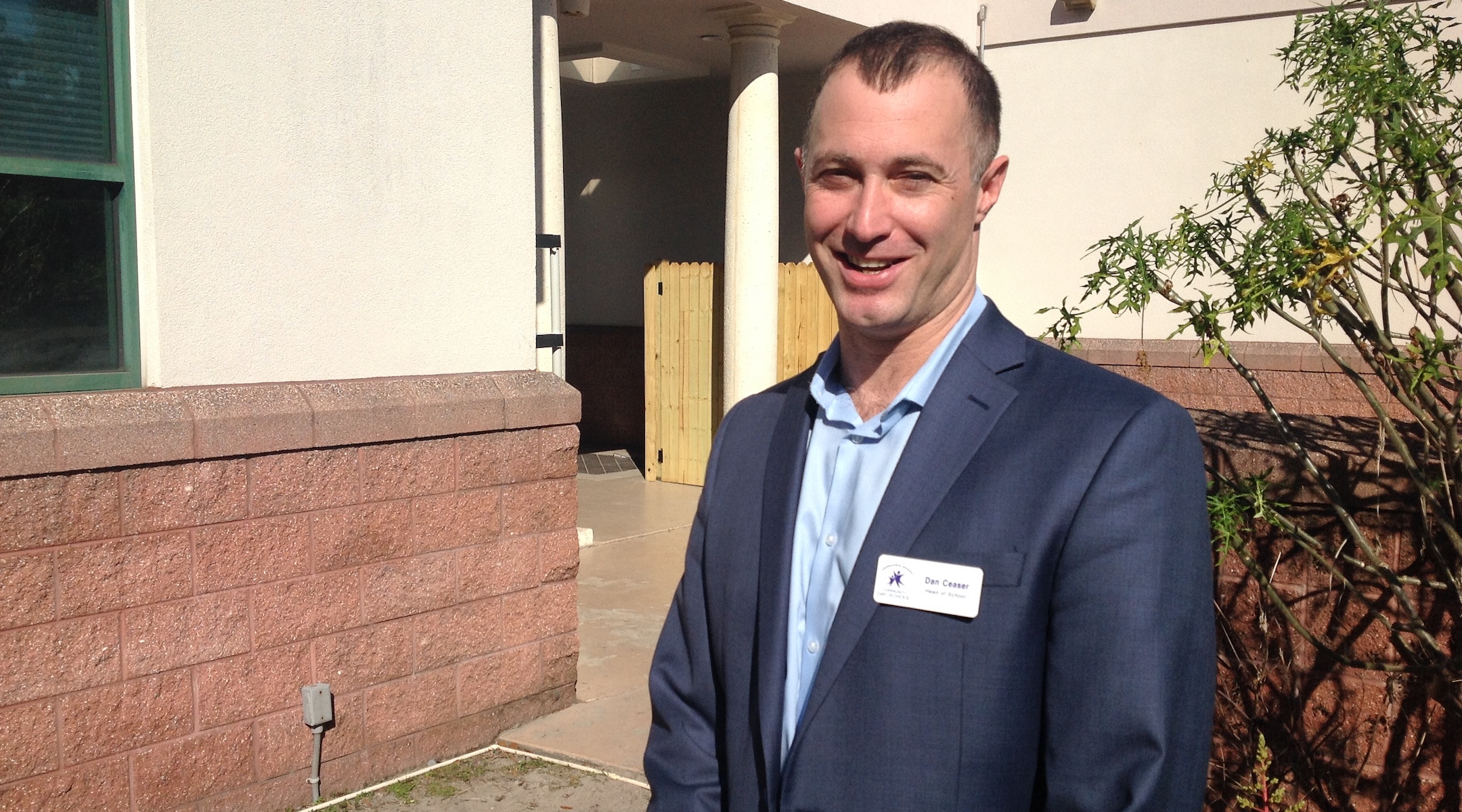 Dan Ceaser, the head of school of Hershorin Schiff Community Day School, has made the school’s diversity a centerpiece of its message. (Ben Sales)

Students at the school learn about the Jewish calendar, holidays and Israel, and pray each morning. Through second grade, they all study English, Hebrew and Spanish. Starting the following year, students split off into studying one of the two languages intensively. There are also a few different religious studies tracks kids can choose — from world religions to Jewish studies to a more intensive, four-day-a-week traditional Jewish track run by Rabbi Chaim Steinmetz, director of Chabad Lubavitch of Sarasota & Manatee Counties, that will have a handful of kids this year.

“It’s kind of cool to compare the two religions,” said Matthew Cook, who will be entering 8th grade at the school and is a practicing Catholic. “The challah and the wine, there’s something a lot similar, it’s bread and wine — almost the same thing. Just [to me] it represents the body of Christ and the blood.”

In Hebrew class, the emphasis is on learning how to order falafel, or listening to classic Israeli singers, said Snait Ben-Herut, a Hebrew teacher. Ben-Herut said she gives kids an overview of Jewish history, which can get them interested in the language. Middle schoolers also travel to Israel every other year.

The school also tries to cater to its diverse student body by being flexible in general. Classes will often have students from multiple grades. The curriculum is project-based, so students can (literally) get their hands dirty in a garden, choosing which vegetables to plant, or can devise a way to build a chicken coop on school grounds — a thing that actually happened.

Eric Pressman, who is Jewish and has two children at the school, appreciates that he can place them in a Jewish environment that does not cloister them away from the country’s non-Jewish majority. 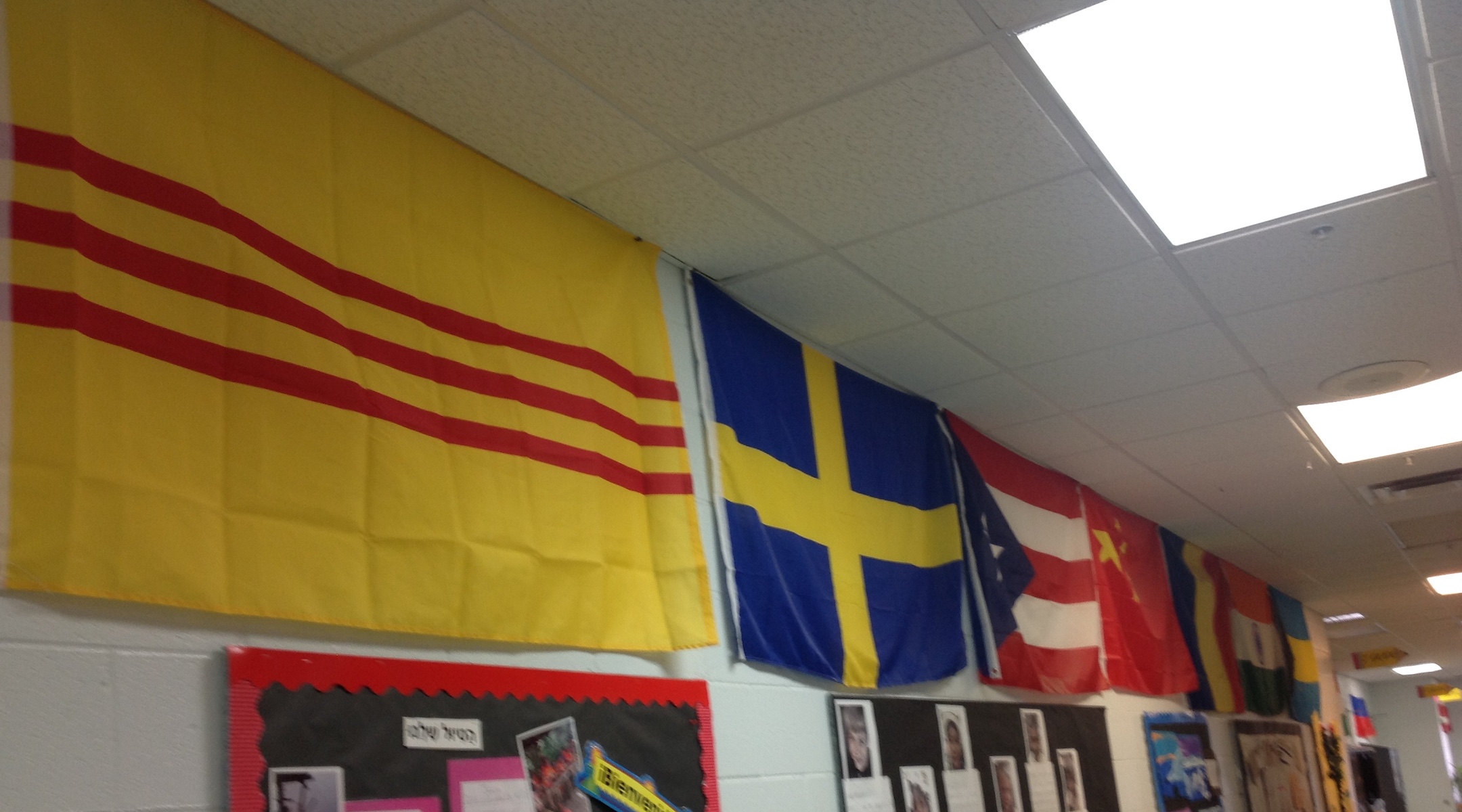 The school has a hallway of flags representing the 40 countries its students’ families hail from. (Ben Sales)

Rev. Kelly Fitzgerald, who leads the First Presbyterian Church of Sarasota, began sending her three kids to Community Day two years ago and is now on the school’s board of trustees. She appreciates the school’s project-based learning and gardening lessons, but also sees value in sending her Christian kids to a Jewish school.

Recently, she was walking with her daughter in the supermarket and pulled a prepackaged school lunch of meat, cheese and crackers off the shelf. Her daughter made her put it back: It wasn’t kosher. Her kids also asked to light a menorah on Hanukkah.

“I don’t feel threatened in going to a Jewish school,” Fitzgerald said, “There’s maybe some understanding in the [Christian] community that that wouldn’t be a faithful choice, but I think it’s where we need to live as a society, in an interfaith culture.”

Ceaser said the school’s atmosphere and philosophy aim to make the students empathetic to each other’s divergent experiences, religious or otherwise. One hallway in the school displays the flags of all of the students’ families’ home countries. Ceaser remembers when, after the flags were hung, a group of seventh-grade girls approached him urgently in the hallway to demand that the Nepali flag be rotated. It was hanging in the wrong direction, they said, and could hurt the feelings of their Nepali friend.

“They’re like, ‘No, we need to talk to you now,’” he recalled. “‘You hung that flag and our friend, we feel like if she sees it hung upside-down, she’s going to feel really disrespected.’ I’m the principal, and they’re stopping me to advocate for one of their friends.”