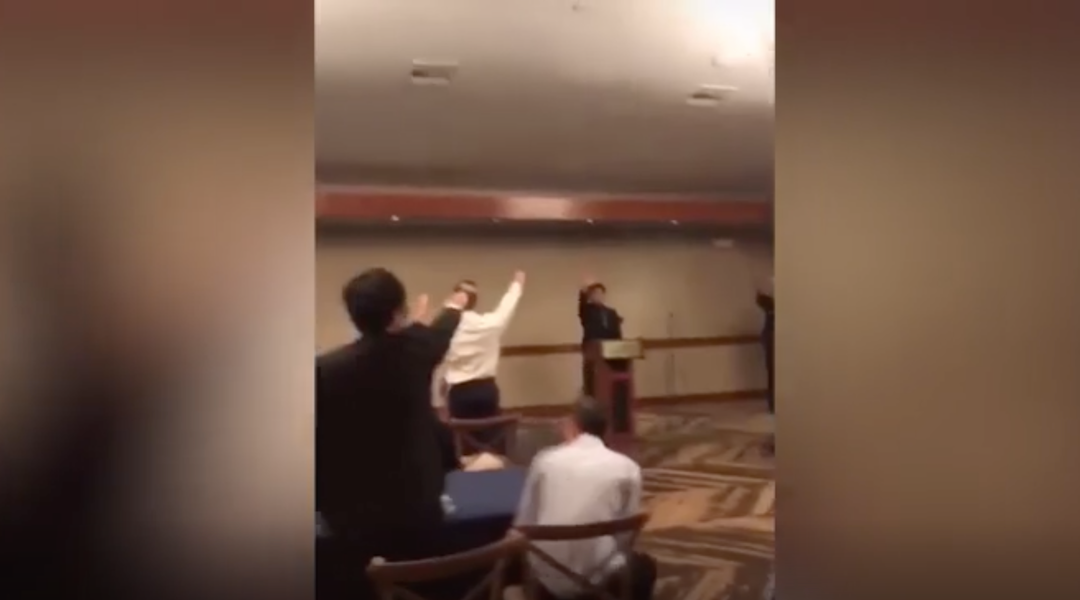 Members of the boys water polo team at Pacifica High School in Garden Grove, Calif., give a Nazi salute in a video from 2018. (Instagram/Daily Beast)
Advertisement

(JTA) — Students at a Southern California high school made a Nazi salute and sang a Nazi marching song at the start of an awards ceremony.

The school district will not say publicly if or how it disciplined the students.

The incident, which took place last year, involved 10 members of the boys water polo team at Pacifica High School in Garden Grove, California, the Daily Beast reported. The video was posted to Instagram by one of the athletes, according to the Daily Beast, and widely circulated among students at the high school.

A spokesperson for the Garden Grove Unified School District which includes Pacifica High School told the Daily Beast that school administrators learned of the incident and video in March, four months after it occurred.

“While the district cannot comment on student discipline, the school did address this situation with all involved students and families,” the spokesperson said. “The district adheres to strong policies about harassment and cultural sensitivity, and we condemn all acts of anti-Semitism and hate in all forms. We remain focused on educating students about cultural sensitivity and are committed to holding students accountable, educating them on the consequences of their choices, and the impact these actions have on our schools and community at large.”

A current Pacifica student told the Daily Beast that the incident was never spoken about by the administration and said it is not clear how the students involved were punished.

The song was written by German composer Herms Niel and was played to inspire Nazi troops from around 1935 until 1945, according to the Daily Beast.

In an interview with the news website, Peter Simi, a professor on extremism studies at Chapman University, noted that the song is obscure and wondered how the athletes learned about it.

“It’s not something you’d expect somebody to accidentally know about. There’s some means by which they acquired knowledge about the song and associated Nazi issues,” Simi said. “Are they on websites or web forums or other social media platforms where they’re engaging with others informed on these issues?”

It is the second such incident in southern California over the last year. In March, students from Newport Harbor High School and Costa Mesa High School made a swastika out of beer cups and made the Heil Hitler salute as part of a drinking game and posted photos on social media.