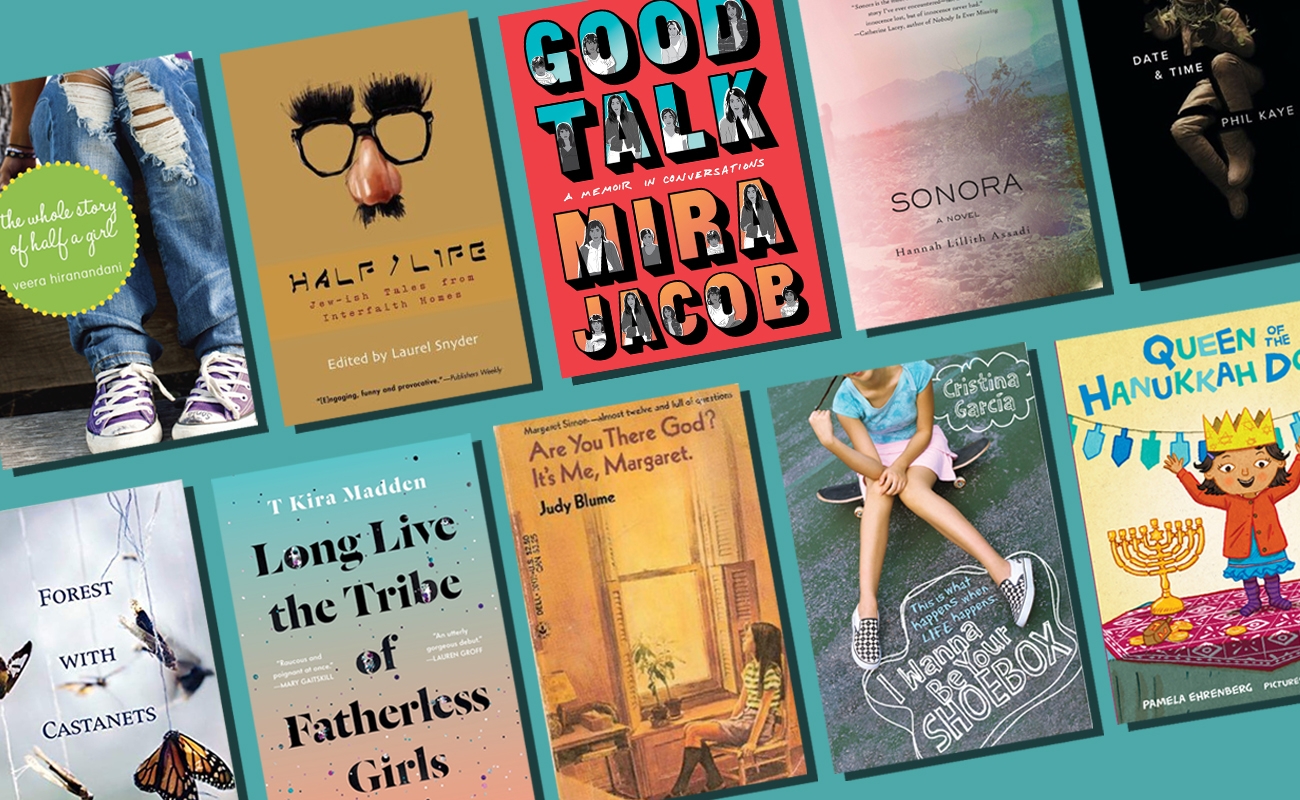 Growing up, I struggled to find my place in the Jewish community as an interfaith Jew. By some people’s standards, I am not Jewish enough, despite having an American Jewish mother, because I have a Swiss Calvinist father. Celebrating Hanukkah and Christmas growing up was my norm, but discussing my holidays and family interfaith traditions sometimes made me feel isolated.

I didn’t know other interfaith Jews growing up, so the first ones I met were through books. Specifically, Margaret in “Are You There God? It’s Me, Margaret” was the first modernish Jewish interfaith girl I encountered. What I’ve found is that many of these characters, like myself, merge traditions from different faiths and have trouble navigating their blended identity.

1. Are You There God, It’s Me Margaret by Judy Blume

I first came across this book when I was in fifth grade while binge-reading Judy Blume’s young adult novels. The main protagonist of this story is Margaret, an 11-year-old who has a Christian mother and Jewish father. Margaret, who was raised without a religious affiliation, chooses to study people’s religious beliefs in an effort to figure out her own religious identity.

It’s wild to think that this book came out more than 50 years ago. From a subplot about girls wondering when they’re going to get their periods to navigating one’s religious identity, this book is still incredibly relevant and worth a reread as an adult.

2. Good Talk: A Memoir in Conversations by Mira Jacobs

When I was younger, I asked my parents a lot of questions about my religious identity and identity in general, much like Mira Jacob’s son Z, who has an Indian-American mother (Jacob) and a Jewish father. In this graphic novel, Jacobs showcases the dialogue that she and her son have had, from his questions about race to her in-laws (and Z’s grandparents) being avid Trump supporters.

3. Forest with Castanets by Diane Mehta

Born to a Jewish-American mother and an Indian Jain father, Diane Mehta’s debut book of poetry explores her cultural identity. Mehta, who was born in Germany and moved to her father’s home country of India shortly thereafter, revealed that she didn’t know that she was Jewish until moving to the United States, when her mother signed her up for “school at the local synagogue in New Jersey.” In “Forest with Castanets,” Mehta writes beautifully about a complicated subject — religious interfaith identity.

If you haven’t heard of “Long Live the Tribe of Fatherless Girls,” you may have been living under a rock. T Kira Madden, whose late father was Jewish and whose mother is Chinese and Hawaiian, said her parents allowed her to learn about “every different religion, every culture.”

Madden, who also chronicles her experience growing up with parents who struggled with addictions in her book, says she hopes that people who feel like outsiders can “recognize some version of themselves, or some element of themselves” in her book.

5. The Whole Story of Half a Girl by Vira Hirandandi

Born to a Jewish-American mother and a Hindu Indian father, Vira Hirandandi said she “grew up feeling not quite enough of one or the other” in an interview with Publisher’s Weekly. In “The Whole Story of Half a Girl,” the protagonist, Sonia Nadhamuni — who also has a Jewish-American mom and an Indian dad — faces pressures from her peers to define her identity, which is a pressure that I felt from my peers, too. Like Blume’s “Are You There God, It’s Me Margaret,” this young adult novel captures what it’s like to navigate one’s interfaith identity as a young girl.

6. I Wanna Be Your Shoebox by Cristina Garcia

In “I Wanna Be Your Shoebox,” the main character, Yumi Ruíz-Hirsch, has a Jewish-Japanese father and a Cuban mother. I don’t have fond memories of eighth grade, and Yumi’s experience is going similarly poorly: Her family is losing its house, her school is cutting her beloved orchestra program and her grandfather Saul is dying. This novel is refreshingly realistic. One of my favorite parts is when Yumi’s mother calls her a poster child for the 21st century because of her mixed heritage.

7. Queen of the Hanukkah Dosas by Pamela Ehrenberg

In this children’s picture book, little Sadie and her multicultural family — her mom is Indian and her dad is Jewish — celebrate Hanukkah while mixing in some of her mother’s Indian traditions, like eating dosas.

While I do enjoy reading novels that tackle the complexity which can often arise from being in an interfaith family, it’s nice to read simple stories of how different religions and cultures can complement each other.

Born to an Irish Catholic mother and a Jewish father, Laurel Snyder has written a plethora of young adult novels and children’s picture books. This is my favorite of hers; it’s an anthology she edited. “Half/Life” contains a series of essays  that showcase various experiences of Jews growing up in Jew-ish homes. It’s a great read if you want glimpses into just how different interfaith Jewish families can be.

Novelist Hannah Lillith Assadi, who is Jewish and Palestinian, published her debut novel “Sonora” in 2017. In an interview with Jewish Boston, Assadi said that she identifies “with both identities” and “grew up celebrating the High Holidays as well as acknowledging major Islamic holidays.” Like Assadi herself, Ahlam, the main character here, is the daughter of a Palestinian father and a Jewish mother who was raised in Arizona. The novel is told from the point of view of Ahlam and follows her and her friend Laura’s journey to New York City.

“Sonora” is captivating — but don’t just take my word for it. The book was a 2018 National Book Foundation’s 5 Under 35 Honoree and a recipient of the American Academy of Arts and Letters​ Rosenthal Family Foundation Award in Literature.

10. Poetry and books by Phil Kaye

Born to a Jewish father and a Japanese mother, Phil Kaye, in an interview with The Knockturnal, said he “felt like this odd duck” growing up, as he didn’t know any other Japanese-Jewish kids. Kaye is also the co-director of Project VOICE with Sarah Kay, a fellow Japanese-Jewish poet. In his 2018 book “Date & Time,” which is a full-length poetry collection, Kaye touches on everything from being a mixed race and interfaith kid to millennial stereotypes.