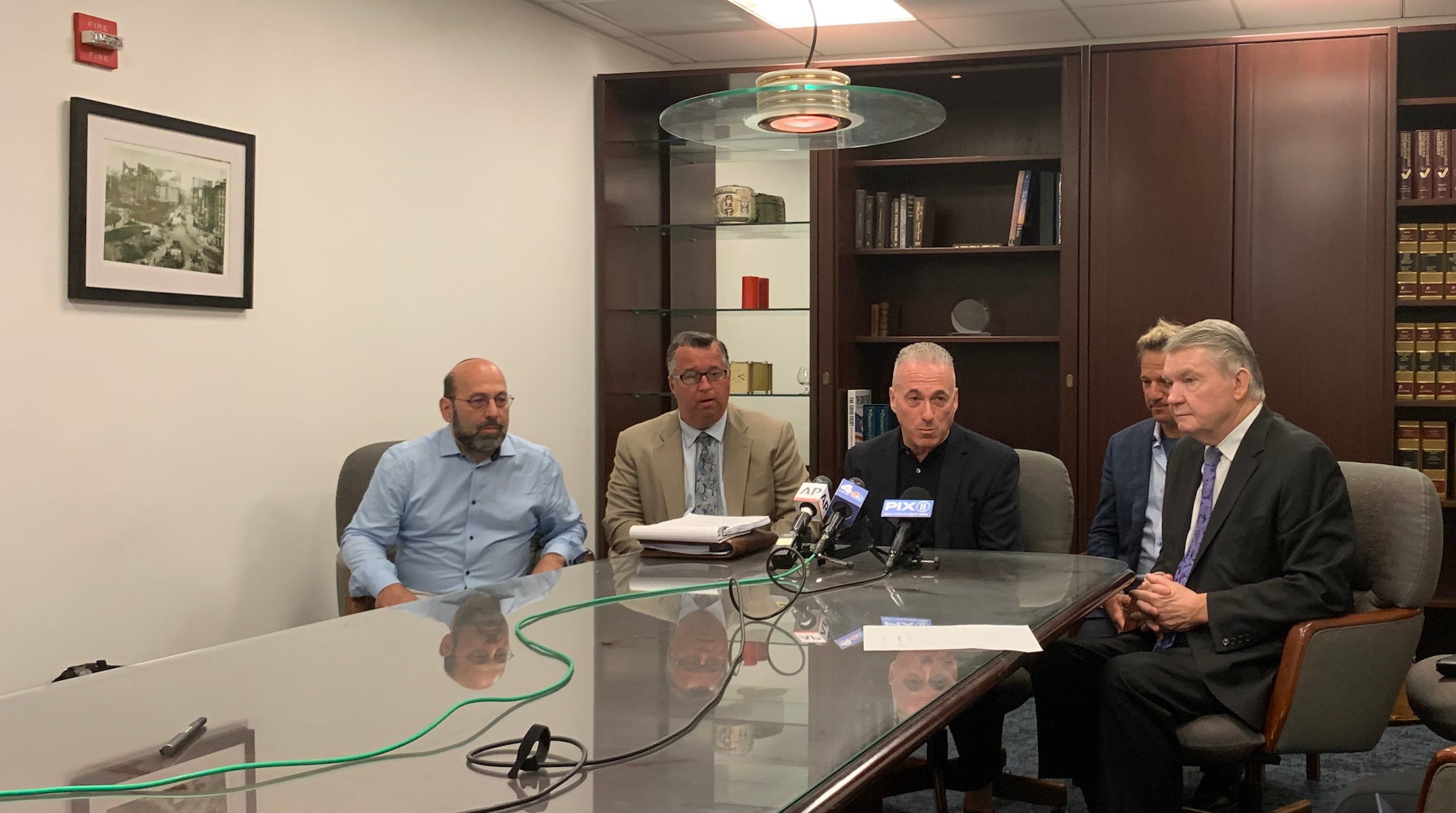 Barry Singer, center, speaks to reporters at a news conference announcing a lawsuit by him and 37 other men who say they were abused by staff at Yeshiva University High School for Boys in the mid 1950s-1986, in New York, Aug. 22, 2019. Also in the photo, from left to right are plaintiff Jay Goldberg, attorney Kevin Mulhearn, plaintiff David Bressler and attorney Michael Dowd. (Josefin Dolsten)
Advertisement

NEW YORK (JTA) — Thirty-eight men filed a lawsuit claiming they were sexually abused at Yeshiva University High School for Boys in a period from the mid-1950s through 1986.

The plaintiffs — five of whom are named — filed the civil lawsuit on Thursday against Yeshiva University, its high school, which is also known as Marsha Stern Talmudical Academy, board members of both institutions and two administrators, Rabbis Norman Lamm, the former Yeshiva University chancellor, and Robert Hirt, former vice president of its rabbinical school.

At a news conference here on Thursday, lawyers said that the New York-based Yeshiva University did not take action despite receiving multiple complaints of abuse relating to incidents spanning more than 30 years. Five staff members allegedly abused boys, though lawyers said two rabbis were responsible for the bulk of it: George Finkelstein, who served as principal, and Macy Gordon, a Jewish studies teacher.

A representative for the high school said the school was not commenting on the matter; a Yeshiva University spokesperson said it does not comment on pending litigation.

In 2014, a New York District Court judge dismissed a suit by 36 men claiming abuse at the high school, citing an expired statute of limitations.

But in February, Governor Andrew Cuomo signed into law the Child Victims Act, which allows victims in the state one year to file civil lawsuits, regardless of when the alleged abuse occurred. It went into effect last week and a flood of lawsuits are expected to be filed against educational institutions.

Kevin Mulhearn, one of the lawyers representing the men, says the team believes this is the largest suit filed to date under the Child Victim’s Act and the first one by plaintiffs who had been in a suit that was previously dismissed.

The lawsuit says Finkelstein repeatedly groped boys and that he specifically targeted the children of Holocaust survivors, telling them they would add to their parents’ suffering if they told them of the abuse. Gordon, a teacher, is being accused of sodomizing multiple young boys in a “vicious and sadistic” manner using objects, the suit says. Both men have denied the allegations. Gordon died in 2017.

Finkelstein was promoted in the late 1980s and named “Educator of the Year” in 1985 despite the school having received multiple complaints that he had abused boys, the lawsuit claims.

One of the plaintiffs, Barry Singer, told the Jewish Telegraphic Agency after the news conference Thursday that it was “empowering” to be able to participate in the suit.

“I thought that was the end,” he said of the case being dismissed in 2014 due to the statute of limitations. “So the fact that we get to turn around and come back and we suddenly seem to hold the upper hand is extraordinary and totally unexpected.”