On ‘Fear the Walking Dead,’ zombies attack my childhood synagogue 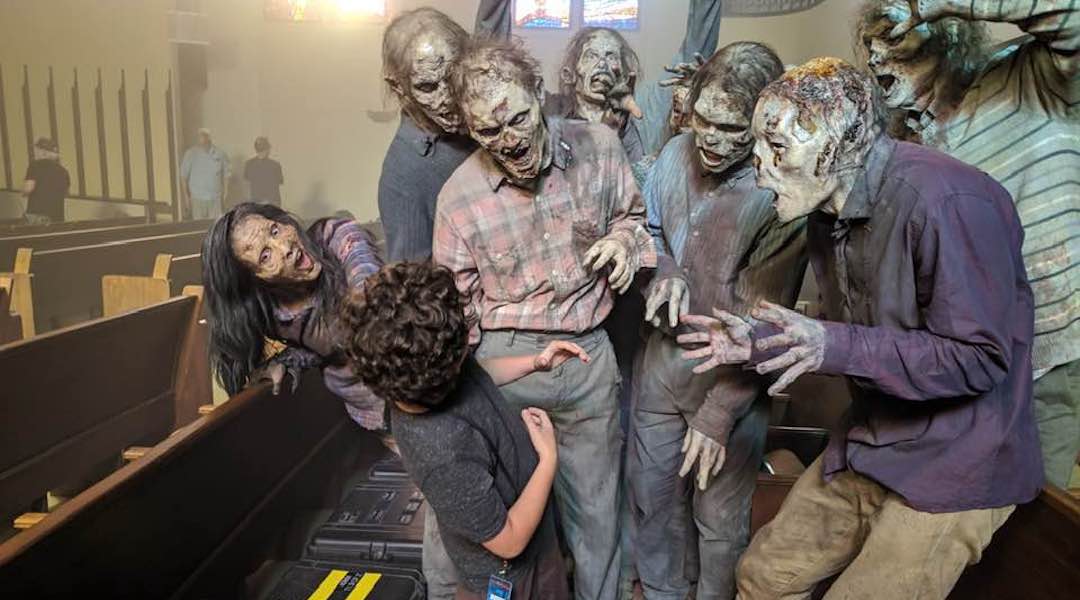 Warning: Spoilers ahead for season 5, episode 12 of “Fear the Walking Dead.”

SAN FRANCISCO (J. The Jewish News of Northern California via JTA) — A lone rabbi lights a Havdalah candle in an empty synagogue. He says the blessing over the wine, then the spices, then the distinctive braided candle.

Then zombies begin banging on the door of the sanctuary. The rabbi extinguishes the candle in the wine, picks up a bayoneted assault rifle, opens the door and stabs a lone zombie in the head. Outside, he encounters a teenage girl, Charlie, and saves her from more zombies.

Charlie tells him she was drawn to the synagogue by the sight of an electric light, a rare sight in a world overrun by zombies.

That’s the opening scene of “Ner Tamid,” the Sept. 1 episode of “Fear the Walking Dead” on AMC. Now in its fifth season, the show is a spinoff of “The Walking Dead,” a TV show based on a comic book of the same name.

Charlie, one of the series’ main characters, is part of a convoy that has decided its mission is to bring supplies — and hope — to other survivors trying to hold out in the face of the zombie apocalypse. Desperate for a safe place to settle down, Charlie sneaks off and ends up taking shelter in a car in the synagogue’s parking lot.

Rabbi Kessner is a new character. And Temple B’nai Israel is actually Congregation Beth Israel of Austin, Texas — my childhood synagogue, the place where I attended religious school and had my bar mitzvah, as well as my dad’s current workplace.

At one point, there is a shot looking down from the synagogue balcony — where my bar mitzvah portrait was taken. The sanctuary is my sanctuary. I can see the row where my family likes to sit. Seeing zombies surround my first spiritual home, a place I know like the back of my hand, is surreal and a little disturbing.

Jarringly, our synagogue’s godawful ner tamid, or eternal light (a twisted, red-stained-glass monstrosity — the eternal lobster, my family calls it), had been replaced by a big silver plot device of a lamp. With an unspoken nod to the miracle of Hanukkah, keeping the eternal light on is a constant source of worry for the rabbi. He keeps it connected to a car battery — but he’s on his last one. 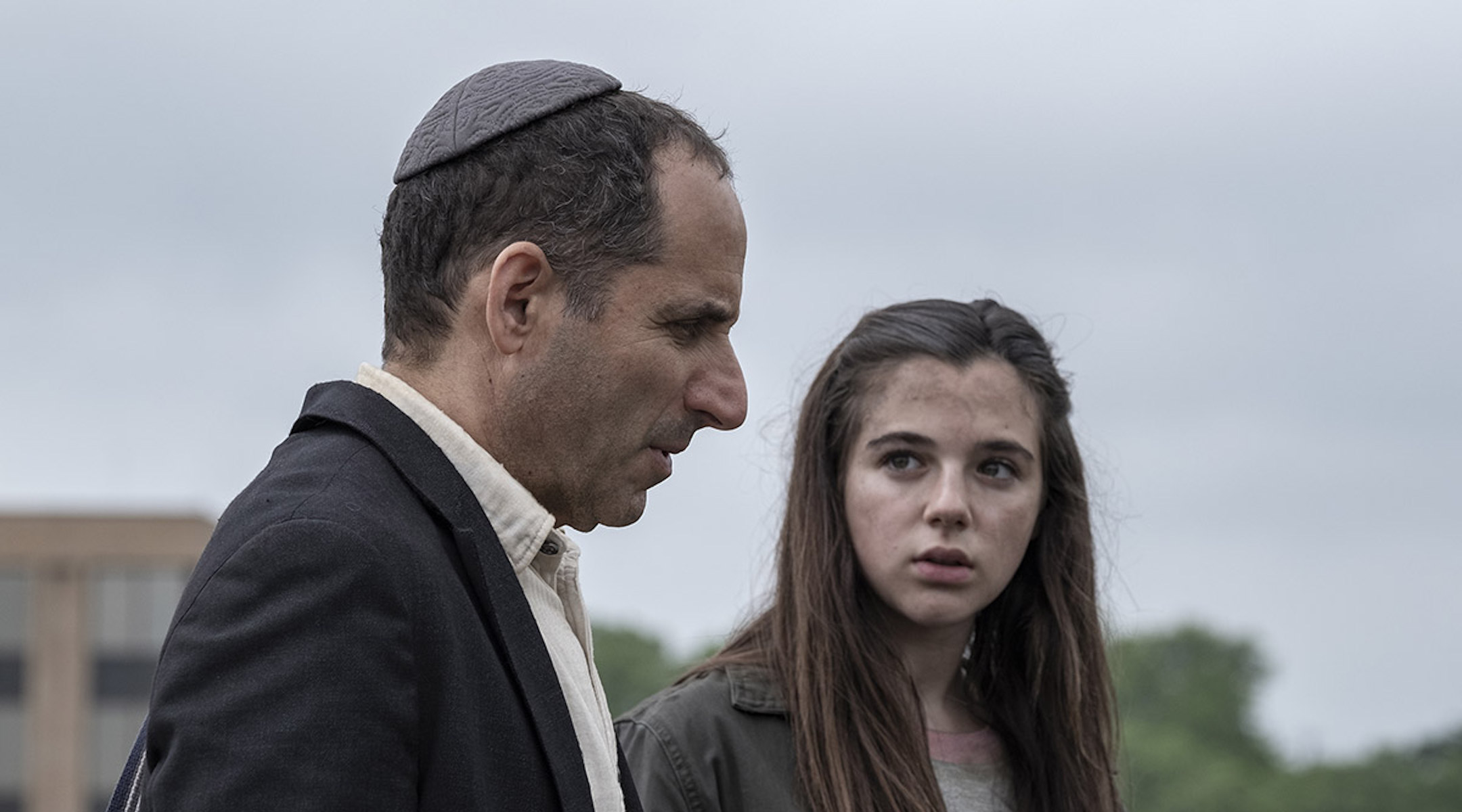 Peter Jacobson portrays a rabbi and Alexa Nisenson plays a girl who seeks shelter at his synagogue in “Fear the Walking Dead.” (AMC)

The next morning, after welcoming Charlie inside, Rabbi Kessner takes a Torah from the ark. (Time for a Sunday morning Torah reading? Torah is not read on Sundays, but it is read on Rosh Hodesh, the first day of the Hebrew month, regardless of the day of the week. Luckily the episode actually aired on Rosh Hodesh!)

“Why do you still do that?” Charlie asks.

Later, though, Kessner admits that he has lost his faith — that the rituals are just “the rhythms of a life I’m trying to hang on to.” It’s clear he can’t keep going the way he has. He’s alone, weary (more so than your average rabbi) and his makeshift fortifications are no longer sufficient.

After two others from the convoy come looking for Charlie, the rabbi reveals that not only is he trying to keep zombies out, he’s also keeping a few of them in. They are his congregants. They holed up there together in the early days of the zombie apocalypse.

Kessner can’t bear to kill his congregants-turned-walkers, keeping a number of them locked up in Cohen Foyer, where I have often hung out, snacked and schmoozed. In one scene, he says Kaddish for them. I shed a couple of tears for the rabbi.

He’s not so different in temperament from the synagogue’s real rabbi, the rabbi of my youth, Steven Folberg, who also served as a consultant on the episode. Kudos to him for a job well done: There’s a lot of Judaism in this episode, rendered with accuracy and sensitivity.

A number of nice touches bring verisimilitude to the Jewish moments. One of the convoy heroes hands Kessner a candy bar. The rabbi checks for a K on the back before eating it. He also has a small vineyard in the back where he makes his own wine.

Upon hearing that there are 36 people in the convoy, he jokingly wonders if he’s found the 36 tzaddikim, the 36 righteous persons that our tradition imagines living in the world at any given time. And, during Havdalah, he observes the custom of looking at the candlelight reflected in his fingernails.

At one point, with dark irony, the rabbi notes the idea of “techiyat hametim,” the belief that in the messianic age to come, the souls of the dead will be resurrected.

The actor playing Kessner is Peter Jacobson, who is Jewish. He’s a great choice for the role, with a strong off-screen Jewish identity.

The thrust of the show is about the search for a promised land, a place to stop wandering and settle down. It’s a wonder it took several seasons to introduce a Jew.

Charlie wants to stay at the synagogue. She thinks it’s the place they’ve been looking for.

“There isn’t a water source for miles,” one of the group’s leaders says. (Actually, the synagogue is on Shoal Creek Boulevard, with the namesake creek just across the street. Not to mention the rainwater that periodically floods the sanctuary.)

During the episode’s climax, a couple of people are being attacked by zombies in the parking lot. Kessner stands on the bimah, blowing a shofar repeatedly, drawing the walkers inside and away from Charlie’s friends. (Loud noises apparently attract zombies.) The Battle of Jericho echoes in my mind — except here, the shofar is a means of escape from home rather than the conquest of a new place to call home.

Kessner and Charlie run from the room, most of the zombies now inside the sanctuary. They lock the doors. The zombies stumble around the bimah. One knocks over the treasured car battery. The eternal light goes out.

Finally, the rabbi leaves his sanctuary and joins the convoy. With a cabinet full of Judaica — a Torah, a Kiddush cup, the whole megillah (so to speak) — he joins their search for a place to call home.