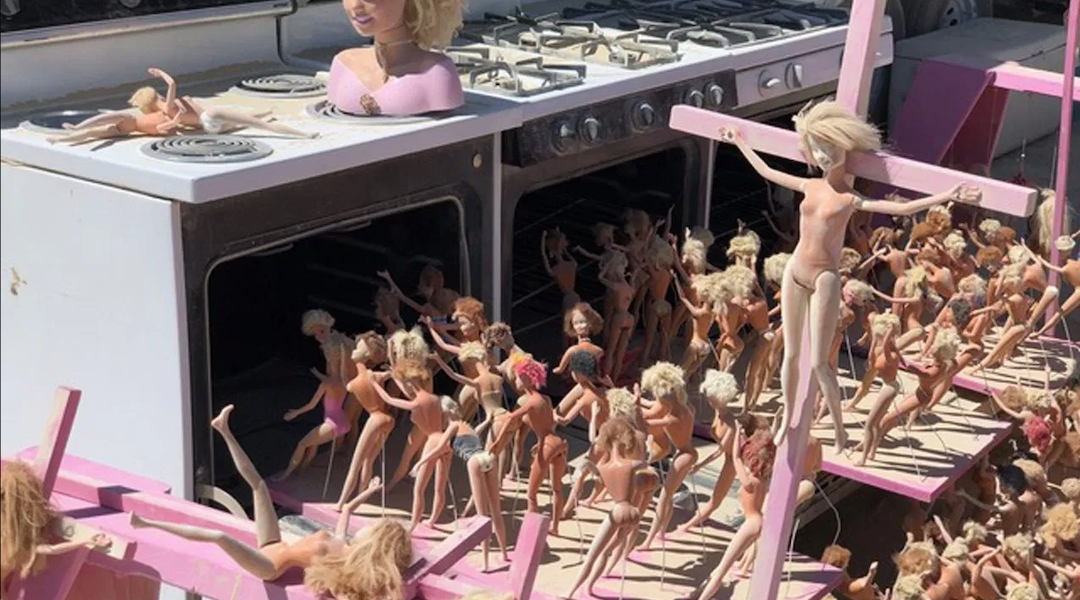 The macabre scene at the Barbie Death Camp at this year's Burning Man. (Courtesy of J. The Jewish News of Northern California)
Advertisement

The “Barbie Death Camp and Wine Bistro,” as it is called by the Nevada festival, has led to widespread outrage at what many see as the trivialization of the Holocaust. The exhibit featured hundreds of Barbies, some of them crucified on pink crosses and others posed as if being marched into ovens.

It’s the brainchild of a Jewish artist, James Jacoby, according to a report in J. The Jewish News of Northern California.

Jacoby said that he had been putting on the same exhibit for 20 years, and that while he didn’t want to “trigger” anybody, “Burning Man is not a safe space.”

“It’s not Yale University. You don’t get to run and hide from something you don’t like. There’s 1,100 theme camps. If you don’t like ours, go to another one,” he said.

A photo published by J. showed a sign at the exhibit that said “The Mattel co. & Auschwitz Inc. ‘Purveyors of fine lampshades and soap products since 1939’ presents Barbie Death Camp & Wine Bistro.” Mattel is the company that manufactures Barbie. It was not involved in the exhibition.

The sign also featured the tagline “arbeit macht plastik frei,” a derivative of the German slogan “work makes you free” that stood over the entrance to the Auschwitz death camp.

“Certainly individuals have a right to free expression,” Brysk said. “But using that free expression to trivialize the Holocaust for the sake of political, social or artistic ends is still deeply offensive and inappropriate. And we would ask people not to do so.”

Since its inception on a San Francisco beach in the 1980s, the Burning Man festival has grown into a mass phenomenon. Tens of thousand of people, or “burners,” now come each year to this post-apocalyptic landscape in the wilderness for an experiment in temporary community and radical self-sufficiency. It features a range of activities and experiences, including Jewish ones.