The Tell: John Bolton is out. Trump’s next foreign policy moves are anyone’s guess. 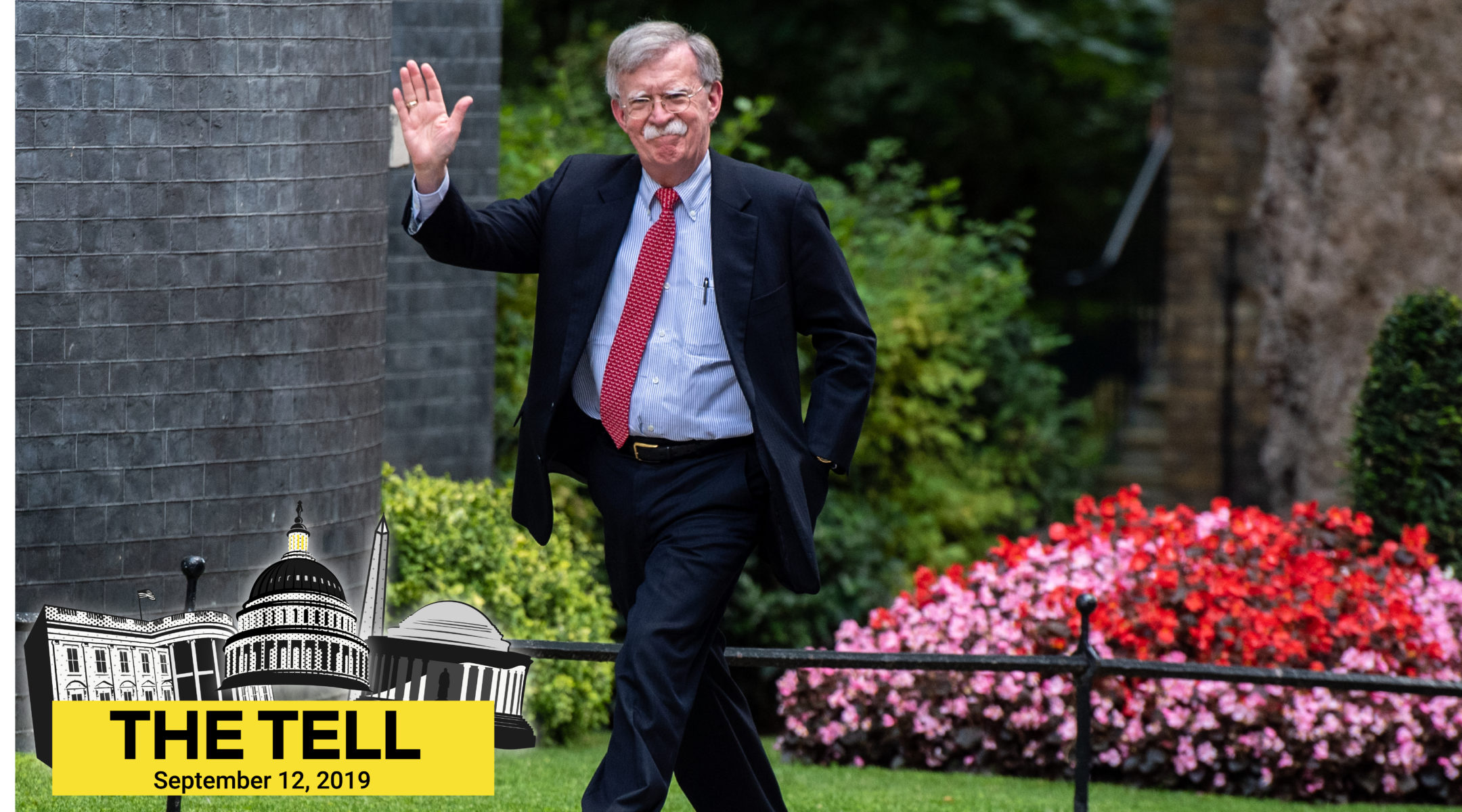 WASHINGTON (JTA) — Every presidency has a foreign policy arc, forged by the circumstances of what propelled the person to the presidency, by the events that occurred during the term and by the president’s vision.

Bill Clinton, shaped by his opposition to the Vietnam War, restrained from intervening in Rwanda. The ensuing genocide drove him by the end of his term to lead the war to separate Kosovo from Serbia.

George W. Bush came into office counseling caution, but was spurred by the 9/11 attacks into a season of adventurism in Afghanistan and Iraq.

Barack Obama, in turn, let the failures of the Iraq War frame his foreign policy of what he called “purpose and pragmatism.” He spoke of “listening,” but found that there were folks in Damascus and Moscow not too interested in talking.

Donald Trump’s foreign policy often seems as dependent on his personal likes, insecurities and feelings on a given day as it does on an overarching philosophy. But there are key moments when Trump appears to be hewing to a vision, of casting off conventional wisdoms about both alliances and foes — and what can and cannot be done.

Which one (or both?) explains a week that saw the jettisoning of the national security adviser, John Bolton? The answer could shed light on whether Bolton’s departure teases that Trump may be ready for a new kind of Iran deal.

The Trump-as-foreign-policy-disruptor theory is a track that has worked until now for Israeli Prime Minister Benjamin Netanyahu:

Suddenly, however, Trump’s taste for smashing diplomatic convention might be breaking against Israel’s interests.

According to the reporting, Trump was eager for the Afghanistan Camp David summit because it would afford him the appearance of brokering a deal at the site most famous for being the scene of the 1979 Israel-Egypt deal.

And now ahead of the U.N. General Assembly launch at the end of the month, Trump is contemplating a summit with his Iranian counterpart, Hassan Rouhani.The convention has been for anonymous officials on both sides to work out theparameters of a deal before such a meeting. The U.S. and Iranian sides, however, have barely spoken, and what would emerge beyond a photo op is not at all clear — but the photo op, for Trump, may be the point.

To be sure, there are plenty of conventional signs that the Trump administration is holding a hard line. For example, the Treasury announced enhanced sanctions targeting leaders of Israel’s enemies, including Hamas and Hezbollah.

But since January 2017, it has not been enough to report on official statements. As important have been the tweets and outbursts by Trump, which are if anything unpredictable.

And this week, when it comes to engaging Iran, Trump’s in “we’ll see what happens” mode.

Bolton was the fiercest internal opponent of any rapprochement with Iran. Now he’s gone.

Here are some takeaways from the Bolton affair:

Trump is the decider even when he can’t decide

The president appears unable to overrule underlings when their initiatives displease him until he can no longer bearthe tension — and then he forces out the underling.

Trump fired H.R. McMaster, Bolton’s predecessor, in April 2018 in part because Trump had deferred to him much too frequently in determining who did and did not have access to Trump. He also deferred to McMaster and his then-secretary of state, Rex Tillerson, on the Iran issue, sticking to the 2015 Iran nuclear deal even though Trump hated it. Tillerson and McMaster also were not fans, but preferred to reform the deal rather than scuttle it. Tillerson also was on his way out. As soon as Bolton was in, Trump pulled out of the Iran deal.

Bolton’s very victories appeared to doom him: He got Trump to scuttle a peace deal with the Taliban, which is still allied with al-Qaida, that would have involved bringing officials of the group to Camp David on the eve of the anniversary of the9/11 attacks engineered by al-Qaida. Bolton also shot down — for a  few hours on Monday — a suggestion by Treasury Secretary Steve Mnuchin to ease sanctions on Iran. But by Monday evening Bolton was out. And by the end of the week, Trump was saying “we’ll see what happens” when it comes to sanctions. The relief could come to as much as $15 billion, The Daily Beast reported.

Trump invited Netanyahu prior to the March election for a photo op: Signing the executive order that recognized Israel’s sovereignty over the Golan Heights.

Netanyahu did not win the election, even though Trump inserted himself directly into the coalition talks. Israel is headed for round two on Tuesday in order to sort it out.

Trump’s influence in Israel meant only so much, which may explain why he’s not eager to expend his sway this time. Despite a dramatic announcement that he planned to annex parts of the West Bank post-election, Netanyahu was unable to secure Trump’s endorsement of the plan. And when it first emerged in August that Trump was open to meeting with an Iranian official — in that case, Foreign Minister Javad Zarif — Netanyahu was unable to get Trump on the phone to talk him out of it.

Trump doesn’t love being told what to do

Bolton was probably Israel’s best friend in the Trump administration, but Netanyahu insisted all was good. “I am convinced, I have no doubts at all, that in any situation — with talks, without talks — President Trump and his administration will be very, very tough with Iran,” Netanyahu said after Bolton was out.

Netanyahu’s ambassador to Washington, and one of his closest advisers, Ron Dermer, leveled what came close to a caution to the Trump administration, saying at a pre-Rosh Hashanah reception, “What is important now is to stay the course, stand up to Iran’s aggression and continue ratcheting up the pressure until Iran abandons its nuclear ambitions once and for all.” But Dermer framed that sentence between a laundry list of Trump’s praiseworthy actions and a dig at Obama, calling theprevious president’s Iran deal “disastrous,” which is just how Trump likes it.

This nugget appeared in the Washington Post’s tick-tock on Bolton’s departure: “State Department officials grew frustrated when leaks about sanctions policy deliberations appeared in neoconservative outlets such as theWashington Free Beacon. The distrust between [Secretary of State] Pompeo and Bolton’s team led the top diplomat to instruct his aides against consulting with Bolton’s team on Iran, in particular Rich Goldberg, the National Security Council’s director for countering Iranian weapons of mass destruction, said officials familiar with the matter.” Goldberg was the driver between the push in the early part of the2010s for tough sanctions against Iran when he was a senior adviser to Sen. Mark Kirk, R-Ill.

Condoleezza Rice said flatly in 2016 that Trump “should not be president.” She is friendly with Hillary Clinton. She recommended Tillerson, whom Trump now despises, for the job she once held under George W. Bush.

This week, however, Rice backed up Trump on his decision to shut down theAfghanistan talks and said Russia’s interference in the 2016 election should not be a factor in considering how to campaign in 2020. Not only that, but she did it live on TV, to NBC — the hated “mainstream media.”

That earned her plaudits from Trump and Ronna McDaniel, the chairwoman of theRepublican Party who is fiercely loyal to Trump. Trump commended Rice for a separate interview she had with Fox.

“Very interesting and secure perspective on life,” he said.

Is Rice auditioning for a job? Rice, who pressured Israel to end two of its wars on her watch — in Lebanon in 2006 and in Gaza in 2009 — and who likened the occupation of the West Bank to Jim Crow would be, from Jerusalem’s perspective, a less than welcome addition to Trump’s Cabinet.

The last time Valerie Plame, theCIA spy outed by her bosses in the leadup to the Iraq War, mentioned Jews, it didn’t go so well: In 2017, she retweeted an article ostensibly about the dangers of war with Iran, but actually a laundry list of things to blame on the Jews. She apologized profusely, and now she’s launched a campaign for Congress and is bragging about her Jewish grandpa.

A Trump Labor Department staffer was fired for dissing Jews, but it turned out he was actually coming to their defense. We examine the eagerness to rush to judgment about who is and isn’t an anti-Semite.

Democrat Jon Ossoff ran and (closely) lost one of themost expensive races in U.S. history in a 2017 special election when he vied for what had been a solidly Republican suburban Atlanta district. I wrote then about how Jewish women (and their daughters) seemed to crop up at every corner of his campaign. Eventually, in 2018, the district went blue, and Ossoff is back vying forthe U.S. Senate in what will be an odd year for Georgia — both Senate seats are up for grabs.

The news: Linda Sarsour, the Palestinian-American activist known for her no-holds-barred Israel criticism, is endorsing Bernie Sanders, and naming his Jewishness as a factor in her endorsement. The bigger news: Bernie is embracing her embrace. 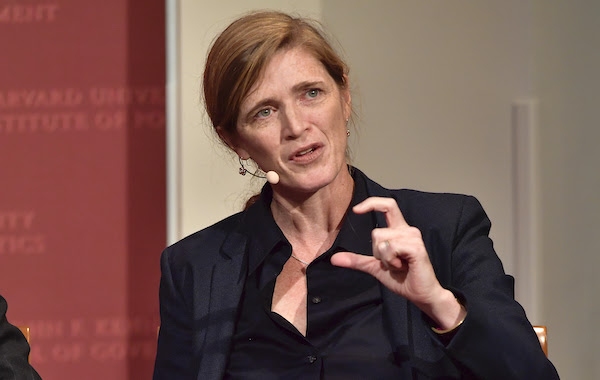 At The New York Times, Tom Friedman reviews “The Education of an Idealist,” by Samantha Power, whose heart was broken twice: witnessing genocide in the 1990s as a journalist and helpless to stop it in the 2010s as a top adviser to Obama. He calls her the “the leading in-house advocate for idealism on the Obama team.”

Is there an account that Photoshops humongous cats so they seem to shrink military hardware? Why yes, there is, and it’s called, naturally, Military Giant Cats. Does it include an Israeli outtake? What did you think?