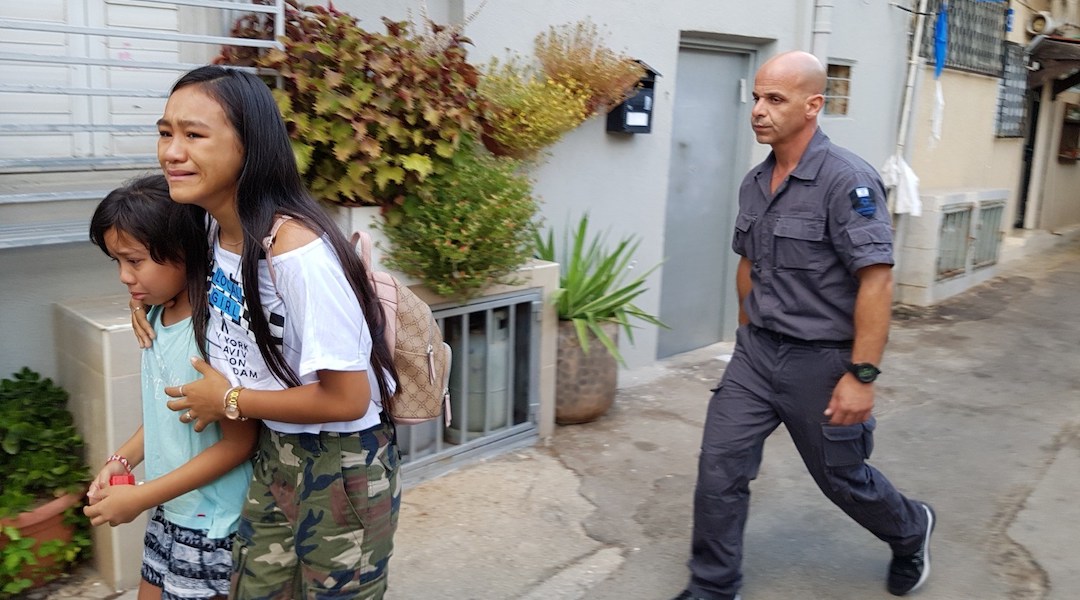 Mika and Maureen Velasco being arrested in August. (Courtesy of United Children of Israel)
Advertisement

TEL AVIV (JTA) — The woman approached with trepidation, fidgeting and glancing nervously over her shoulder as she sat down in a coffee shop here.

A Filipino caregiver who has been living in Israel without a visa for years, the woman said her home had been raided by Israeli authorities in late August, only a week after she took her children and went on the run, spooked by a series of arrests of foreign workers and their Israel-born children.

Since then, they have spent time in three separate safe houses. Except for moving between hiding places, the children hadn’t been outside during the daytime all summer.

“If we buy stuff for the kids, we have to do it at night because the kids are scared that during the daytime something will happen to us,” said the woman, who insisted on remaining anonymous as a condition of speaking with the Jewish Telegraphic Agency. She added that she is “very scared and tired of hiding.”

Israel has been cracking down on foreign workers who have overstayed their visas, putting thousands of people at risk of deportation. Hundreds of thousands of non-Jewish foreigners work in Israel in a variety of occupations, and of those thousands are estimated to have remained in the country illegally after their visas expired. Some have given birth to children for whom Hebrew is their primary, and sometimes only, language.

Over the summer, in a move seen by some activists as representing a change in policy, authorities conducted a series of raids targeting foreign workers and their families, leading many families who had lived relatively openly to go into hiding. Some were taken in by sympathetic Israelis but remained on the move to elude the authorities. Many of those targeted for expulsion were born, raised and educated in Israel, and advocates say it’s cruel to deport them.

“After 21 years serving the Jews and Israelis, especially the elderly, I think they can be compassionate to our children and let them live their dreams and have a better future,” said Beth Franco, a caregiver from the Philippines who has lived in Israel for more than two decades and is an organizer for the advocacy group United Children of Israel. “It’s better here for our children. They don’t have Jewish blood, but in every sense of the word they are Israelis.”

The government doesn’t see it that way. Earlier this summer, the Interior Ministry announced plans for an operation to track down and deport some 100 workers and 50 of their Israel-born children who were in the country illegally. That led thousands of Filipinos and their Israeli sympathizers to take to the streets in a series of rallies organized by United Children of Israel.

“You need to play cat and mouse. You have no peace of mind,” Franco said. “You look over your shoulder on the street and you have to be sharp. When you go home you have to make sure you don’t go straight, and you have to zigzag and take shortcuts in order not to be followed. This is the life we are living. It’s really hard.” 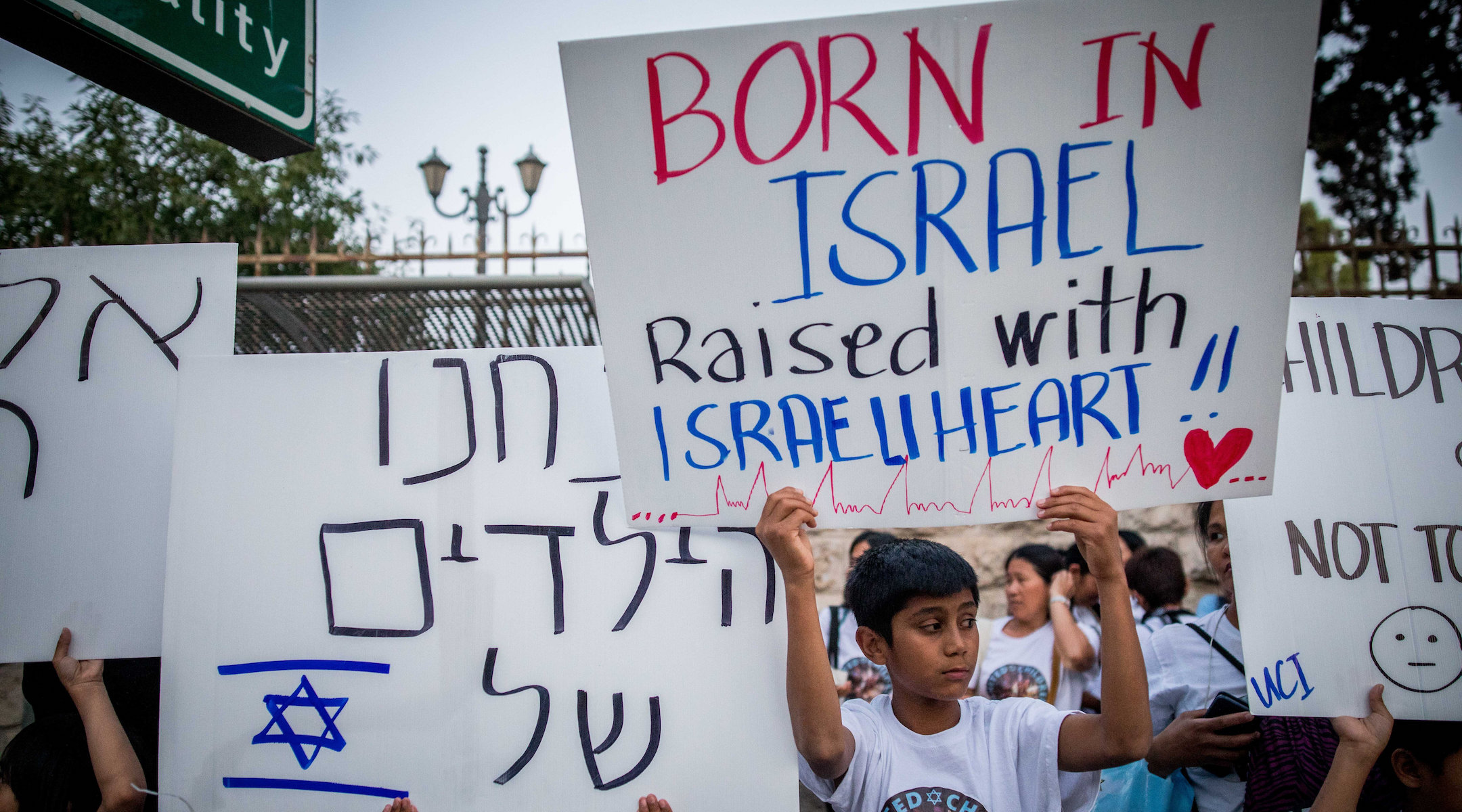 Filipino workers and their children take part at a protest outside the prime minister’s residence in Jerusalem, June 11, 2019. (Yonatan Sindel/Flash90)

Shira Abbo, the spokeswoman of the Hotline for Refugees and Migrants, a nongovernmental organization that works to defend the rights of migrant workers, says that except in rare circumstances, foreign workers in Israel are barred from having romantic relationships and having children in Israel. Israel is unique in imposing such restrictions, Abbo said.

One of those arrested this summer was Sheila Velasco, a Filipino caretaker who has been in Israel illegally for years and whose children studied at Tel Aviv’s Balfour School. On Aug. 18, Velasco was arrested along with her partner, Randy Bakaru, and their daughters, Mika and Maureen.

For 12 days, Velasco and her daughters were held in detention and allowed to see Bakaru, who was held separately, for only 20 minutes a day. Authorities would occasionally allow her to order Israeli snacks from a nearby store to give her native Israeli, Hebrew-speaking children a sense of normalcy. A judge eventually ordered the family released on bond for the duration of the legal proceedings against them, ruling that continued detention could prove harmful to the children.

“The children were crying,” Velasco said of their time in detention. “In the jail, they didn’t sleep or eat and asked a lot of questions about why they didn’t go to school and why they closed the door and needed to lock our cell.”

Among those who rallied to the family’s defense was Tamar Ben Yishai, a parent of school friends of Velasco’s daughters. After the family’s arrest, a parents’ committee was organized to help United Children of Israel run rallies and advocate for the children. The committee also raised more than 25,000 shekels (over $7,000) within hours to pay for a lawyer.

“For us, they were a part of our community,” Ben Yishai said. “The kids grew up together, sang and celebrated all the holidays and birthdays together. It never crossed our minds that they were in jeopardy in any way.”

According to Abbo, the state once was more lenient with migrants who were parents of schoolchildren, in most cases refraining from deportation during the academic year. But Sabine Hadad, a spokeswoman for the Population and Immigration Authority, denied that there had been a change in policy.

“The decision to arrest during the school year isn’t a change in policy,” Hadad said. “There will be arrests during the year as usual.”

David Tadmor, an attorney representing several families of foreign workers, alleged that the authority was taking advantage of Israel’s current political morass to ramp up enforcement. April elections left the leading political parties unable to form a government and Israelis returned to the polls on Tuesday.

“We know these children are really Israeli in every respect and have done nothing wrong except to be born to immigrants who came to Israel lawfully and overextended their stay,” Tadmor told JTA. “Under every principle, including international conventions to which Israel is a party, the treatment of children cannot be determined by the status of their parents.”

But Hadad said Israel has little choice in the matter.

“In Israel, the law doesn’t say that if you are illegally here for many years you will get citizenship,” she said. “That is the law here.”

Even so, advocates say it’s unreasonable for Israel to expect it can allow large numbers of foreigners into the country and expect they will never fall in love or have children with Israelis.

“You expect a young female in her prime not to get pregnant?” Franco said. “After a week staying with an old lady you have to have a life, even for a few hours. We’re not animals.”