Amar’e Stoudemire is now an undergrad, goes to his campus Hillel and wants to boost black-Jewish relations 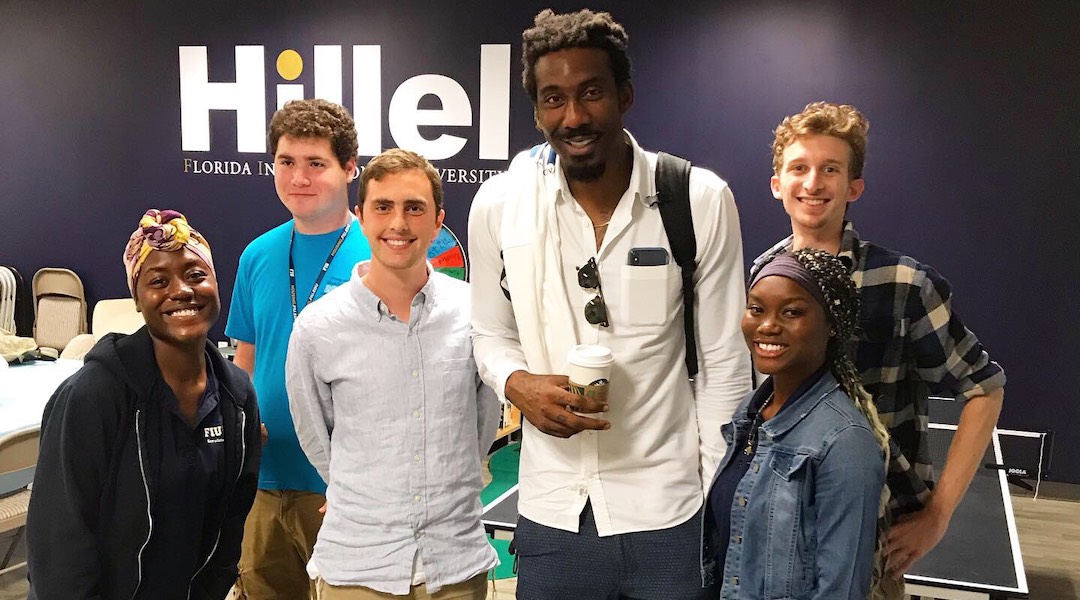 (JTA) — Despite his serious thoughts about an NBA comeback, Amar’e Stoudemire is taking a little break from basketball to go to school. The former six-time NBA All-Star, who had never attended college, started this fall as a freshman at Florida International University in Miami.

Though the semester just started, Stoudemire — who has converted to Judaism, has Israeli citizenship and spent three years in the Jewish state playing for Hapoel Jerusalem — has already become a big name at the campus Hillel.

On Wednesday, he launched an initiative to strengthen ties between Jewish and African-American students at FIU. Stoudemire is working with Hillel and the campus Black Student Union to host bridge-building and educational events.

The basketball star has a longtime connection to Judaism. He is in the process of completing a second conversion — “more Orthodox,” he says — and also has associated with the Hebrew Israelites, African-Americans who believe they are connected to the biblical Israelites and adhere to some Jewish customs.

The Jewish Telegraphic Agency talked with Stoudemire on Tuesday about the initiative, his Jewish identity and his plans for the upcoming High Holidays.

On why he decided to launch the program:

“It’s kind of a branch of myself. Being African-American and also being Jewish, I’ve learned so much and was able to change my life and understanding how to articulate the positivity in one’s life, so that’s something the African-American community can also learn from. And then students who are in that environment for education, it’s even more of a sharper way to learn, so I felt like it was important to put out those programs on campuses.”

On the similarities between the Jewish and African-American communities:

“There’s a lot that both cultures have endured. From us African-Americans in slavery to the Jewish people having been in the Holocaust, there’s a lot of hatred toward both groups. I think this is an opportunity to understand our differences, but also educate each other on the future.”

On spending a year learning Jewish texts at Ohr Somayach, an Orthodox yeshiva in Jerusalem:

On his connection to Judaism:

“I’ve been studying Judaism for many years. I’ve converted into Judaism. My family are Israelites, we’re descendants of the ancient tribes of Israel who came to the Diaspora. So I’ve been able to connect myself with the Jewish people because they’ve been able to keep the laws to a strict, sharp standpoint that I dream of getting to. That was the goal for me to go to learn at the yeshivas, and with the rabbis there and being in Israel, to really to try to change my life and be as firm in my learning as they are.”

On converting to Judaism:

“It happened years ago, it happened about seven or eight years ago, so I can’t remember the actual date. But recently I’m going through more of an Orthodox conversion now. I’m pretty familiar with the teachings, it’s just a matter of now being able to express that in my actions and the way I live.”

On how his line of kosher wine is doing:

On how he will be celebrating the High Holidays: