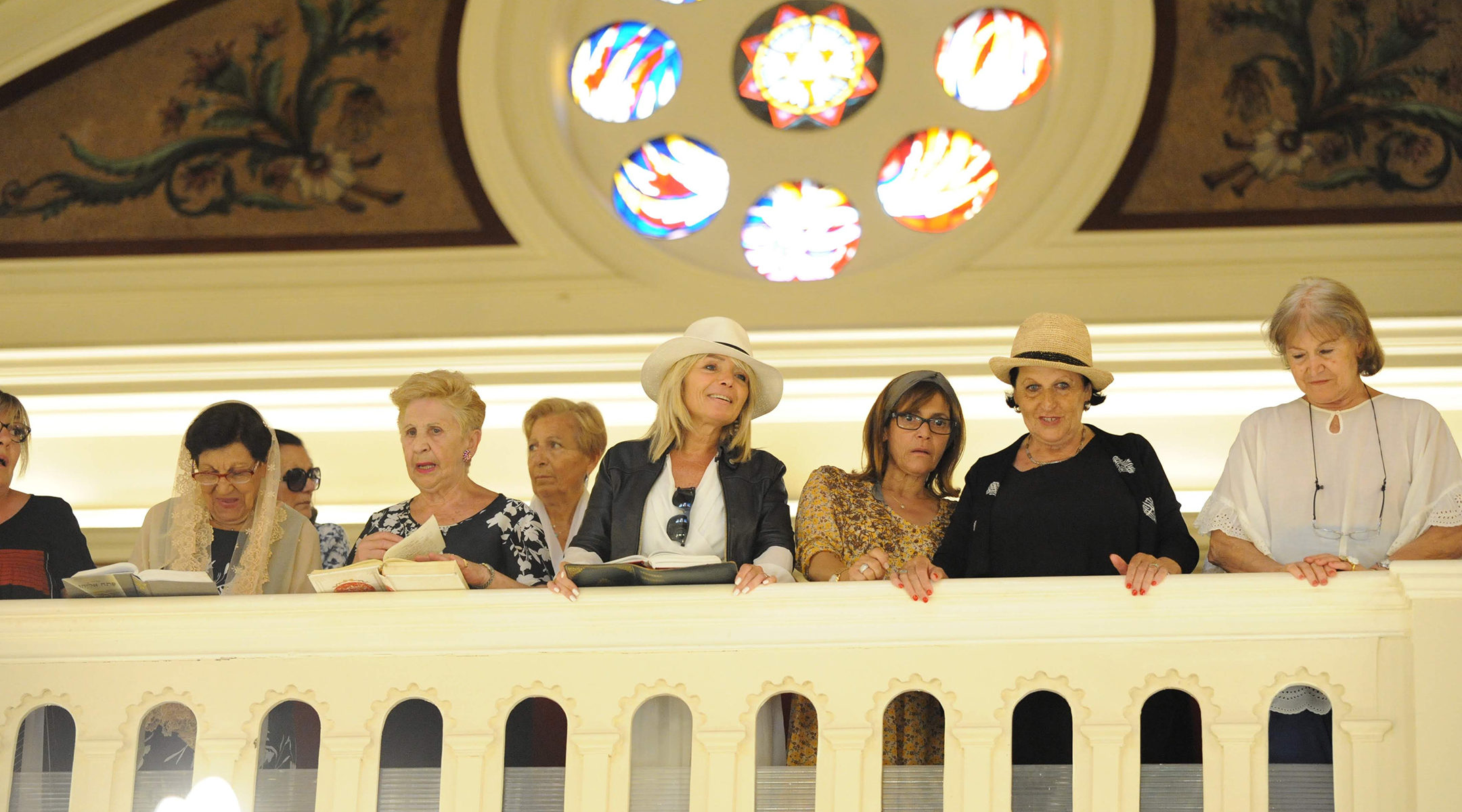 The Grand Synagogue of Nice used to be packed on Shabbat, but today there are more empty seats than occupied ones. (Courtesy of Consistoire Nice/Henri Belhassen)
Advertisement

NICE, France (JTA) — This sleepy Mediterranean city has been a haven for Jews for nearly 1,000 years.

As recently as 15 years ago, this former trading hub with a tradition of tolerance was home to the fourth largest Jewish community in France, with about 20,000 members. But the combined effects of anti-Semitism, terrorism, financial problems and assimilation have taken their toll.

Last year, for the first time since World War II, the French Consistoire, a national organization that provides religious services to Orthodox Jews, estimated that Nice’s Jewish population had dipped below 3,000, though some local Jewish officials think the number may be higher.

Security and economics are changing life for Jews throughout France, but they’re hitting particularly hard in Nice, which lacks the vibrant economy and robust job opportunities that help sustain Jewish communities in other French metropolises.

“[Nice] is a small city with a small Jewish community and you really feel the wave of aliyah,” said Yaacov Parienti, a 29-year-old student, using the Hebrew word for immigration to Israel. Parienti’s sister has already left for Israel and his parents are planning on leaving soon.

“Does my community have a future? I don’t know,” Parienti said. “I think it’s a general problem for all Jews in France. But it’s just more felt in a small one like ours.” 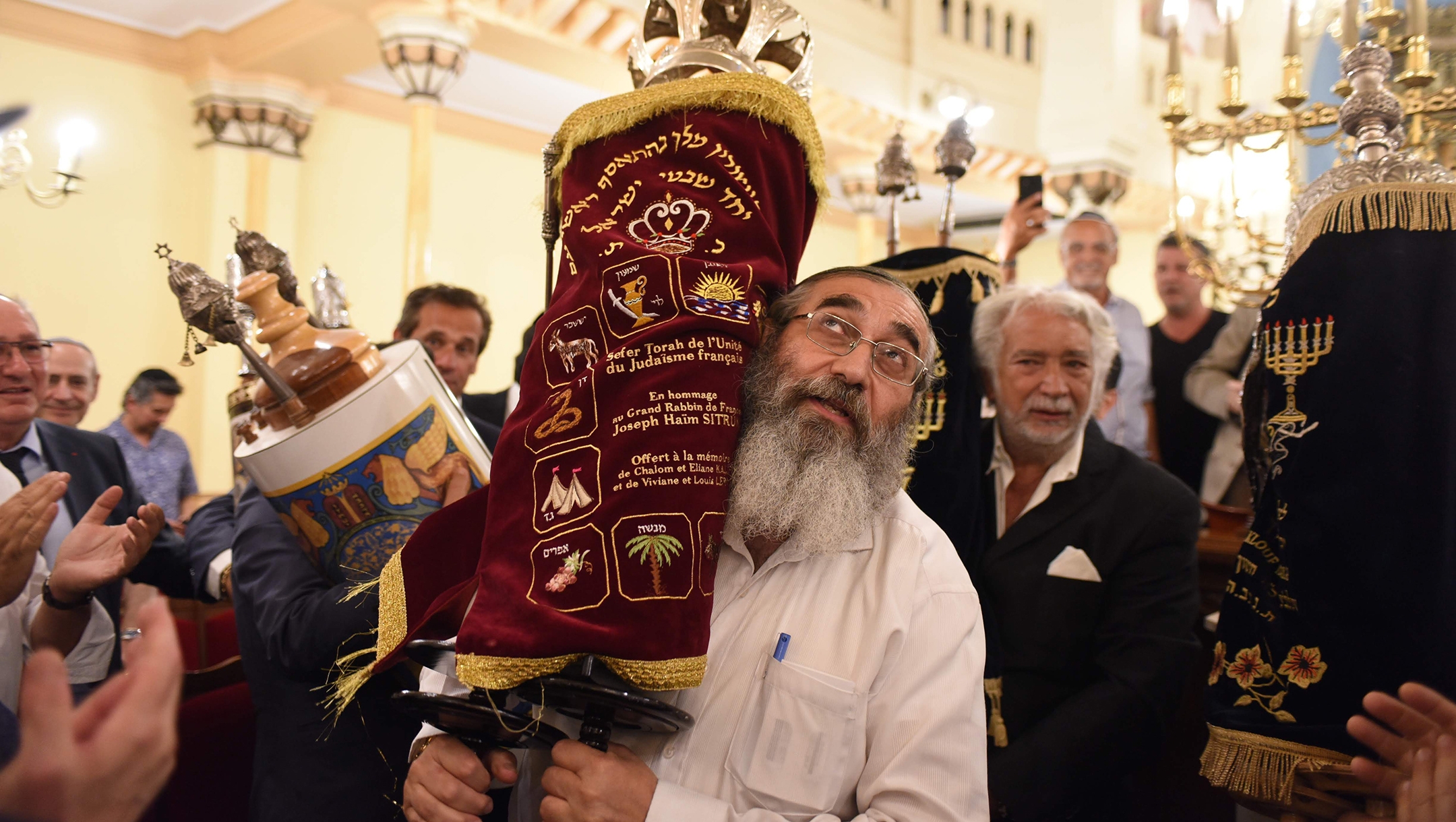 French Jews celebrating the inauguration of a new Torah scroll at the Grand Synagogue of Nice on July 11, 2019. (Courtesy of Consistoire Nice/Henri Belhassen)

Several local Jewish officials pointed to the 2016 terrorist attack, in which an Islamist killed 86 people and wounded hundreds by plowing a truck through a popular waterfront promenade on Bastille Day, as a watershed moment for the Jewish community. The attack wasn’t directed at Jews specifically,“but it introduced fear into the equation in a new way,” said Simone Darmon, an adjunct secretary-general of the local office of the Consistoire.

Rabbi Yossef Yitschok Pinson, an emissary for the Chabad Hasidic movement, believes that the actual number of Jews in Nice is at least 10,000, but he agreed that the 2016 attack “created a wave of people leaving.”

Nice still has several kosher restaurants and 15 synagogues, but most of them struggle to reach the quorum of 10 men required for prayers on weekdays, according to Pinson. The once-active Bnei Akiva Jewish youth movement has closed down its chapter in the city. And the Grand Synagogue, which used to be so packed with congregants on Shabbat that the rumble of their chatter echoed into the surrounding streets, now has more empty seats than occupied ones.

Zacharie Frankel, a 30-year-old Nice native who immigrated to Israel in 2009, dates the turn in the Jewish community’s fortunes earlier, to the anti-Semitic violence that began to spike during the Second Intifada, the violent Palestinian uprising that began in the fall of 2000. French immigration to Israel jumped after 2013, with about twice as many people coming in the last six years as came in the six years prior to 2013.

“You started getting harassed on the street,” said Frankel, who transferred from a Jewish school to a public school in 2001 and wears a yarmulke in public. “I started getting threatened not only on the way to school but in class. Because I’m Jewish.”

Parienti also wears a yarmulke and has never experienced harassment in Nice, but he said that the effects of anti-Semitism were felt “indirectly.”

“It caused many people to leave,” Parienti said, “especially after the 2016 attack.”

The economic situation in Nice isn’t helping matters. Nice’s region, Alpes-Maritimes, has the third-highest unemployment rate in France, and many of Nice’s Jews have financial difficulties. About 120 of them receive assistance from the community, according to the Consistoire.

“There are no real possibilities here, career wise,” Parienti said.

Still, Nice has qualities that are keeping many Jews put — not least of which is the security-first policy of Mayor Christian Estrosi. An ally to many French Jews – he declared himself “Jewish at heart” and a “proud friend of Israel” in 2014 — the right-wing mayor is “an important element in reassuring Nice’s Jews and inspiring a sense of safety,” said Franck Médioni, president of the Masorti Jewish community of Nice.

Last year the CRIF umbrella group of French Jewish communities praised Estrosi for his handling of an attack in which several men attacked a Jew wearing a Star of David pendant in what officials described as an “anti-Semitic assault.” Within hours, police had four suspects in custody, all of them from families that had immigrated from Muslim countries.

A tram arriving at Garibaldi Square in Nice, France on August 10, 2010. (Myrabella/Wikimedia Commons)

Several locals say the departure of thousands of Jews from Nice has strengthened the cohesion of those who remain. Médioni’s community, Maayane Or, has grown over the past five years from 84 families to 135, he said. Relations between progressive and Orthodox communities in Nice are “positive and fraternal,” a departure from the often acrimonious interactions between the groups elsewhere in France.

“There is a determination, because of terrorism, to be together and express our Judaism,” Médioni’s said.

In 2015, Pinson’s Chabad movement opened a new community center in an old villa in Nice’s center and holds events for hundreds of people on Jewish holidays, he said. Attendance at Nice’s three Jewish schools, which have about 600 pupils between them, has grown noticeably in recent years, Pinson added.

“Although, in truth,” Pinson said, “this development at Jewish schools is probably because of the growth of anti-Semitism in public schools.”