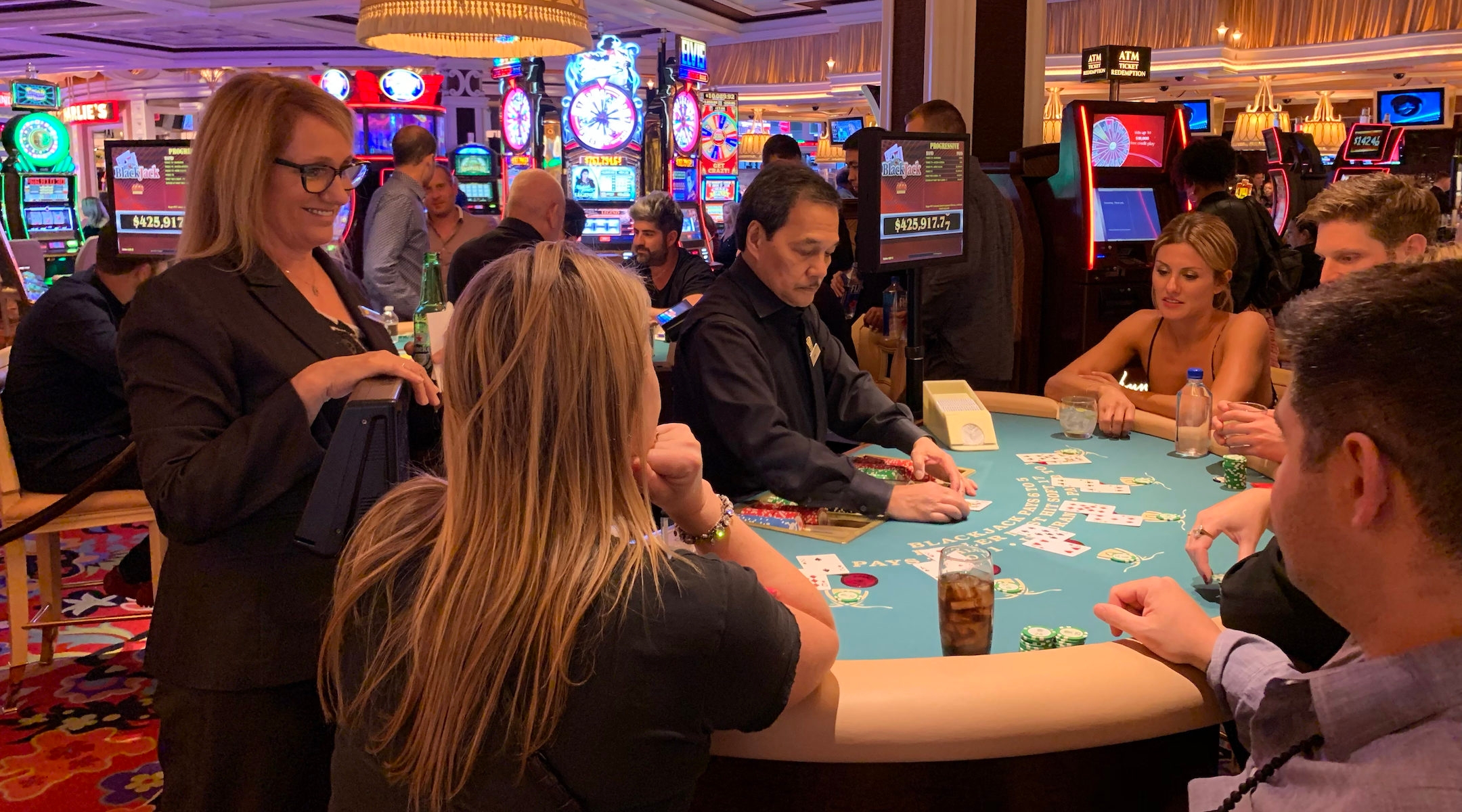 LAS VEGAS (JTA) — Orly Graves doesn’t look twice as a group of friends sits down around midnight at the blackjack table and puts down $1,000. She compliments their shoes and grabs a hook, clasping it underneath the table so one of the women can hang her purse on it.

“That’s what you do, you anticipate their needs before they need it,” she explains.

Graves, 59, is responsible for monitoring four blackjack tables at Wynn Las Vegas, a five-star hotel and casino on the Strip. She works late-night shifts — 8 p.m. to 4 a.m. — five days a week. A former dealer herself, she makes sure the dealers are doing their jobs, that no money goes missing and the customers are satisfied.

Graves grew up in the Israeli city of Petach Tikvah before coming to the United States on a college basketball scholarship in 1980. She has been working in the gaming industry on and off for 20 years. In between, she also worked at a local Jewish day school and two synagogue Hebrew schools teaching Hebrew and Judaic studies.

Though the two professions may seem worlds apart, she insists they are not.

The Jewish Telegraphic Agency sat down with Graves to learn more about what it’s like to work as a dealer in Sin City. The conversation has been edited for clarity and length.

JTA: How did you end up working at a casino?

Graves: I was a schoolteacher. I loved it. At the time my boyfriend, who is my husband for the last 30 years, he was a manager in a casino. I really didn’t like casinos. I didn’t want to be part of it.

As a schoolteacher, you struggle. What do you make, 32 or 35 thousand a year? And I was madly in love with the children, it was definitely my passion.

So my [now] husband says, “Why don’t you go to dealing school?” I said, “I really don’t want to. But you know what? I’ll try it.” I went for three days and they hired me.

So I was a dealer for a couple of years and I was doing both, I was teaching and dealing. The money for dealing was excellent because you live on your tips. You make minimum wage and then whatever tips you make.

The money at this place is phenomenal. I got hired — not for my dealing skills, just for my people skills. Because we’re a people business.

Tell me more about why people skills matter in a casino.

Were you intimidated at first when people would bet large sums of money?

I was very scared in the beginning. It was like, “Oh, $25,000 chips!” But now it’s just a chip. It’s the people — I love when they come back and they look for me. People look for you because they had an amazing experience.

You mentioned how much money you can make working here. What has that money done for you?

I was able to send my daughter to private school from first grade to the end of high school, and that’s huge. It’s a lot of money. It was an amazing sacrifice to make and it paid off. I’m very blessed to have this opportunity.

What types of sacrifice did you have to make?

What I mean is, you make a lot of money here and it can go to your head. You can go spend it all. And I think the sacrifices I made, I went without [spending that money] and I allowed my kid to have a private school.

As a schoolteacher, there’s no way you can afford to send your child to a private Jewish school in the U.S. It’s outrageous. So this job allowed me to do so.

Going from Hebrew school teacher to blackjack dealer seems like a big change.

It’s the same thing. Working with preschoolers and drunks after midnight that come to clubs and all that — it’s the same thing, if that makes any sense to you. That’s how I make sense out of it. To me, because it’s such a [change] — education to this.

But what you’re doing is you’re educating here, too. A bunch of 21-year-olds don’t know how to behave when they drink, and I say, “Hey guys, what do you think your mom would think about that, pulling your pants down?”

The environments do seem pretty different at the same time.

The environments are greatly different. Especially in here, you have a lot of high-end players, people who are going to spend 3, 4, 500 dollars a night on a hotel. How would you like to be treated? Like a princess, right? That’s the bottom line.

I notice you’re wearing a Star of David. Do you wear it to work every day?

Every day. And I get a lot of comments — some positive, some negative.

The Jewish people that come in here, they love to see that I’m proud of wearing this and I’m not afraid.

And then when the Arabs come — and I understand Arabic pretty well — they say, “She’s Jewish.” And they think maybe I will treat them in a different way, and it’s totally the opposite. I want them to feel welcome because I have no issues with them. This is open for anybody as long as you behave.