Harold Bloom dreamed in Yiddish until his death 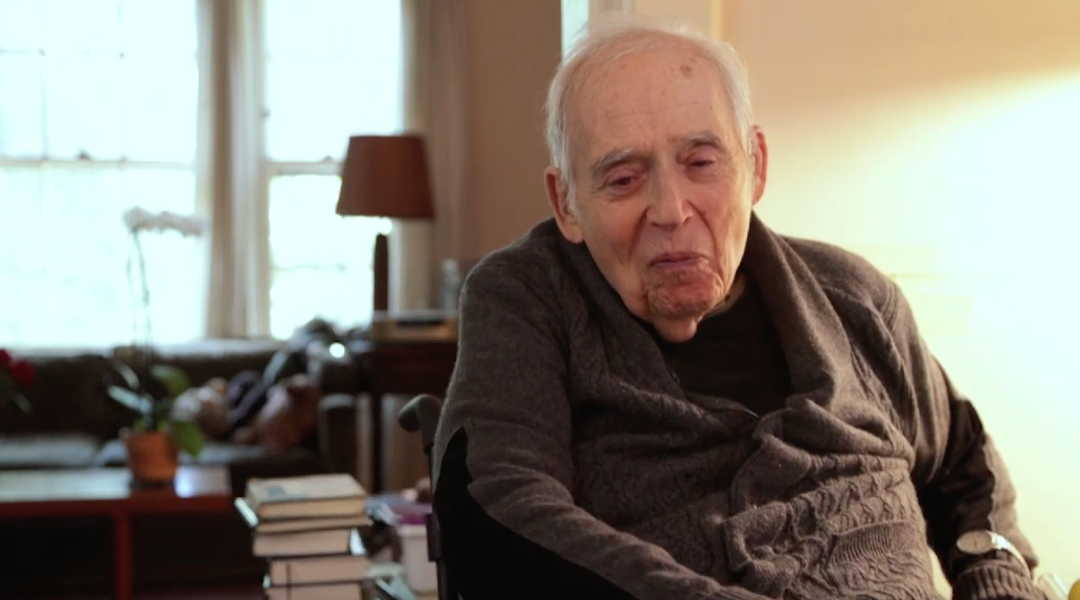 NEW YORK (JTA) — Many obituaries of Harold Bloom, the lion of American literary criticism who passed away on Monday at 89, mention that he was born to Orthodox Jewish immigrants from Eastern Europe.

Few mention his lifelong love of Yiddish, and particularly Yiddish theater, which he grew up watching in New York City (although The New York Times one does say that the first book Bloom read was an anthology of Yiddish poetry).

In what was likely one of Bloom’s last interviews, taped only a few weeks before his death, he spoke with the Yiddish Book Center for its Wexler Oral History Project. The project has shared some of the highlights and video from the interview with the Jewish Telegraphic Agency.

“I still dream in Yiddish”

“As a very small child, 3, 4 years old, I was sent to Sholem Aleichem schools … they were all over the Bronx. So, pretty good early education that was strictly in Yiddish … But to this day my English is very curious because I learned it only through the eye and not through the ear. I didn’t, in fact, hear English spoken until I was about 5 1/2. I was a preternaturally early reader and at 5 or 6, I was already reading Shakespeare and trying to read Milton and so on. But English is, of course, a very peculiar language, as Bernard Shaw complains, the orthography and the pronunciation have nothing in common. So to this day, I speak my own curious, inflected English. It doesn’t sound like anybody else’s. So as far as I’m concerned, I still dream in Yiddish.”

On whether he still read Yiddish

“Of course. Jabotinsky did a [Yiddish] version of Dante. I’ve been writing about Dante recently, and reading it in the Italian. I looked at Jabotinsky’s [Yiddish] translation, which is very strange. A very strange man, Jabotinsky. But there’s a sadness in all of it because I doubt that there’s one Jew alive today in Odessa.”

“Funnily enough, the first book I ever owned myself, and it still strikes me as hilarious, was a New Testament in Yiddish. One day, the doorbell rang and a missionary handed it to me. So I read it years later, since I became a classics major at Cornell. We spent a semester reading the New Testament. Even as a child, I conceived a dislike of it, which I’ve made clear many times, saying that indeed it should be called the Belated Testament and Tanakh [Hebrew Bible] the Original Testament. One of my many ways of making enemies, of whom God knows I have a plethora.”

“A lot of the best poetry written in the United States is in Yiddish … Moyshe-Leyb Halpern in particular, he was an amazing poet. “The Yiddish Baudelaire,” they called him, but he’s not at all like Baudelaire. He is quite unique … The humor. Violently funny. The mastery of the language. Unfortunately, he was dead before my time. I knew [Jacob] Glatstein pretty well. He was not as unlikable as [Isaac] Bashevis [Singer], but he wasn’t a very sweet person.”

“The first Shakespeare plays I ever saw were in Yiddish”

“My three wonderful older sisters steadily took me to the Second Avenue Theater. Unfortunately, Thomashefsky and Jacob Adler were already gone, but Maurice Schwartz was there. The first Shakespeare plays I ever saw were in Yiddish at the Second Avenue Theater and I will never forget my experience. This is about 1938 and I’m 8 years old. The magnificent Maurice Schwartz is Shylock. But this has all been marvelously rewritten, in Yiddish — as they said, ‘farbesert’ — improved.

“Schwartz was an enormous man. He had a gigantic black beard and a big booming voice, and he played the histrionic old Russian style, like Jacob Adler and Thomashefsky. So there he is, waiving an enormous scalpel, and he’s approaching Antonio, the trembling ‘sheygetz’ [rascal], who is stripped to the waist and suddenly with a histrionic shudder that you could feel all through the Second Avenue Theater, Maurice Schwartz drops the scalpel and screams out ‘Ikh bin dokh a yid,’ which is of course untranslatable. It’s like – well, after all I’m Jewish and we don’t do this sort of thing. At which, the play stopped and I got used to this at the Second Avenue Theater. Everybody in the audience cheered. Schwartz ran from one side of the stage to the other, interrupting the performance, bowing and throwing kisses to the women in the audience. Women dashed forward throwing roses at him. It became a sort of general tumult. It was 20 minutes before the play could resume. I loved it.”

“‘Death of a Salesman’ … works beautifully as a Yiddish tragedy”

“I never thought much of ‘Death of a Salesman’ until an actor with whom I was close, Joseph Buloff, translated it into Yiddish and acted the part of Willy Loman, and he invited me to see it in New York. It was marvelous. The whole point is it works beautifully as a Yiddish tragedy, but makes no sense as an American tragedy. But in Yiddish as rendered by Buloff and acted by Buloff, it had real power.”

“My favorite Yiddish proverb I translate, ‘Sleep faster, we need the pillows.’ That’s the essence of it. Compassionate, and conducting a kind of implicit quarrel with God. Remember the great statement of Benya Krik in Babel’s great story ‘How It Was In Odessa’? After his hoods have shot this highly meek and gentle Jewish clerk, a mother is complaining. And Benya says, magnificently, ‘All right, so I made a mistake. Even God makes mistakes. He could have put us in Switzerland surrounded by nothing but thousands of lakes and millions of Frenchies, but where did he put us? Here, in godforsaken Russia.'”