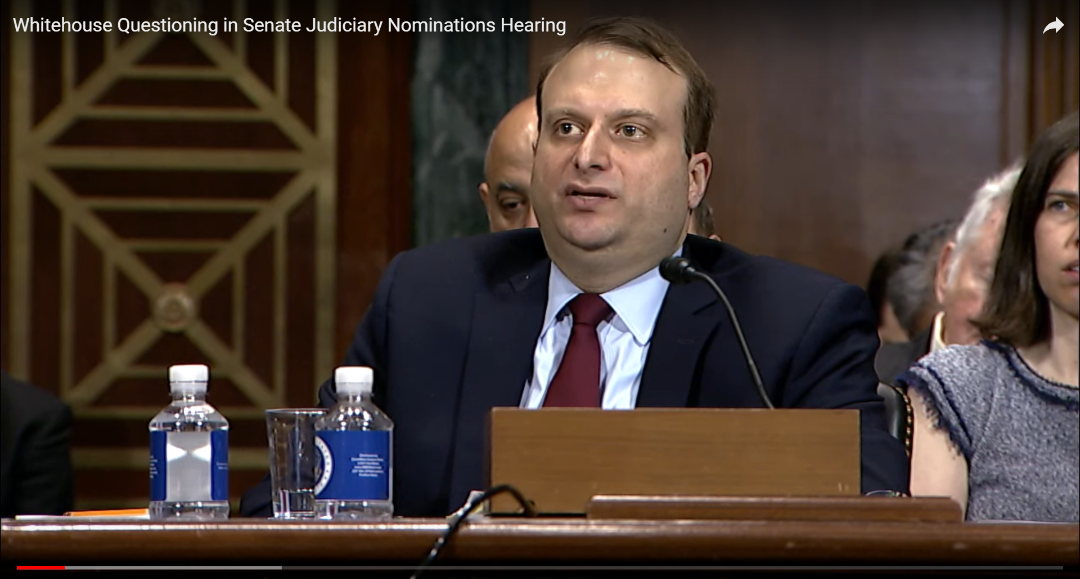 WASHINGTON (JTA) — In 2010, Steven Menashi, then a law professor at George Mason University, wrote an article defending Israel from the charge that it’s an ethnonationalist state.

“Ethnonationalism and Liberal Democracy,” published in the University of Pennsylvania Journal of International Law, said that many countries — he cited Ireland, Greece and Bulgaria, among other examples — have a particularist notion of national identity.

“Far from being unique, the experience of Israel exemplifies the character of liberal democracy by highlighting its dependence on particularistic nation-states,” Menashi argued.

In the article, Menashi also seemed to cast doubt on the value of ethnic diversity.

Nearly a decade later Menashi, 40, is President Donald Trump’s nominee for a position on the 2nd U.S. Circuit Court of Appeals covering New York, Connecticut and Vermont. And the article is one piece of evidence in a nomination battle that is touching raw nerves in a polarized country, including immigration, feminism, LGBTQ rights and nationalism.

In a statement in August, the National Council of Jewish Women said it was “stunned and deeply disturbed by Steven Menashi’s calls for ‘ethnonationalism’ and against ‘ethnic heterogeneity.’ In these words, we hear haunting echoes of cries for a master race and racial purity.”

In a segment last month that went viral, MSNBC’s Rachel Maddow, a liberal flagbearer, characterized Menashi’s article as a “high-brow argument for racial purity.” Maddow was rebuked — not only by conservatives at Reason and The Wall Street Journal, but by liberals at Vox and The Vetting Room — for ripping quotes out of context and mischaracterizing them.

Marc Stern, the general counsel of the American Jewish Committee, said that while the group would not endorse Menashi, describing the article as disqualifying was “specious.”

Still, there’s plenty of other material for Menashi opponents to seize on.

The Leadership Conference on Civil and Human Rights, an organization that includes several Jewish groups under its umbrella, has released a laundry list of Menashi’s perceived sins. Over seven pages long, the list includes policies that Menashi has advocated or helped shape involving the rights of women, the LGBTQ community, immigrants, Muslims and racial minorities. Notably, the Leadership Conference’s jeremiad against Menashi does not cite his article on ethnonationalism.

As a student at Dartmouth in 2001, Menashi also wrote an article comparing supporters of affirmative action and LGBTQ rights to the Nazis.

“Sixty years after the promulgation of the Nuremberg laws, universities persist in cataloguing students according to race on college applications and official documents,” he wrote in the Dartmouth Review in an attack on the media and others for advocating for extending hate crimes protections to gays.

“This analogy,” the Leadership Conference said in its statement, “reflects both ignorance of history and tremendous hostility to diversity and efforts to remedy past discrimination.”

Menashi, a New York native, also does not have the support of his home state’a U.S. senators, both Democrats: Chuck Schumer, the Jewish minority leader, and Kirsten Gillibrand. (There was a time that senators from a judicial nominee’s home state could block a nomination, but that Senate courtesy, like many others, has gone out the window.) Menashi does have a “well qualified” rating from the American Bar Association.

The Leadership Conference does not necessarily need consensus to issue its statements. Two of the conference’s Jewish member groups, the National Council of Jewish Women, and Bend the Arc have joined five others in taking a public position. Stern told the Jewish Telegraphic Agency that the American Jewish Committee’s “unwavering policy” is not to get involved in confirmation fights. An official of the Reform movement’s Religious Action Center said the group has no formal position, “but we have significant concerns.”

In his Senate testimony last month, Menashi spoke of his upbringing as the descendant of Jews from Iraq and Ukraine, and called the charge of ethnonationalism “hurtful.” He also said he would not apply his argument to the United States, where shared national identity is not based on ethnicity but on a commitment to “constitutional traditions.”