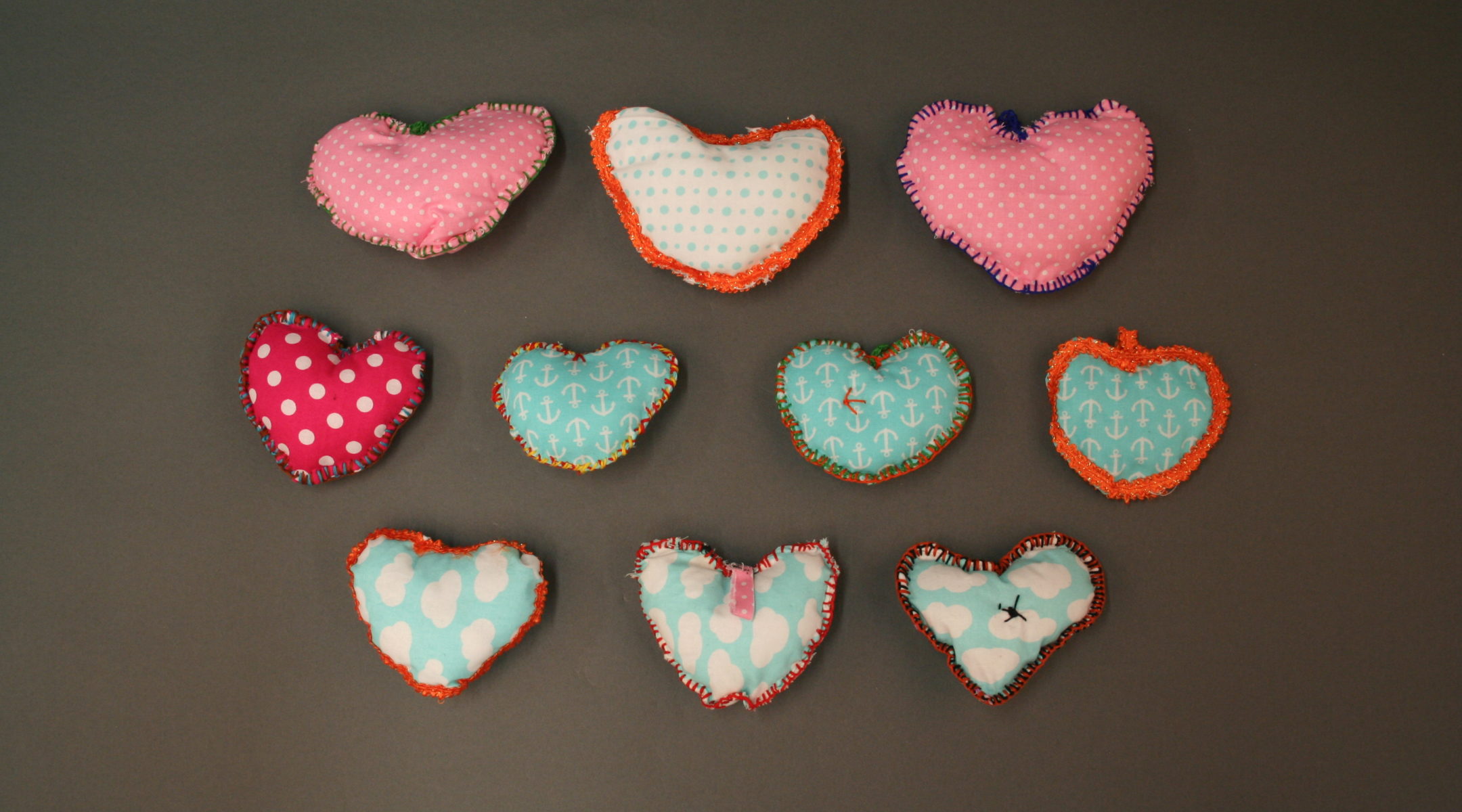 But mostly, Lidji remembers the stones — some 2,000 of them spread around the other memorials left at the synagogue in simple tribute to the 11 Jews who died there at prayer on Oct. 27, 2018.

After the shooting at the Sandy Hook Elementary School in 2012, thousands of teddy bears arrived from across the country. In Pittsburgh, people left stones. 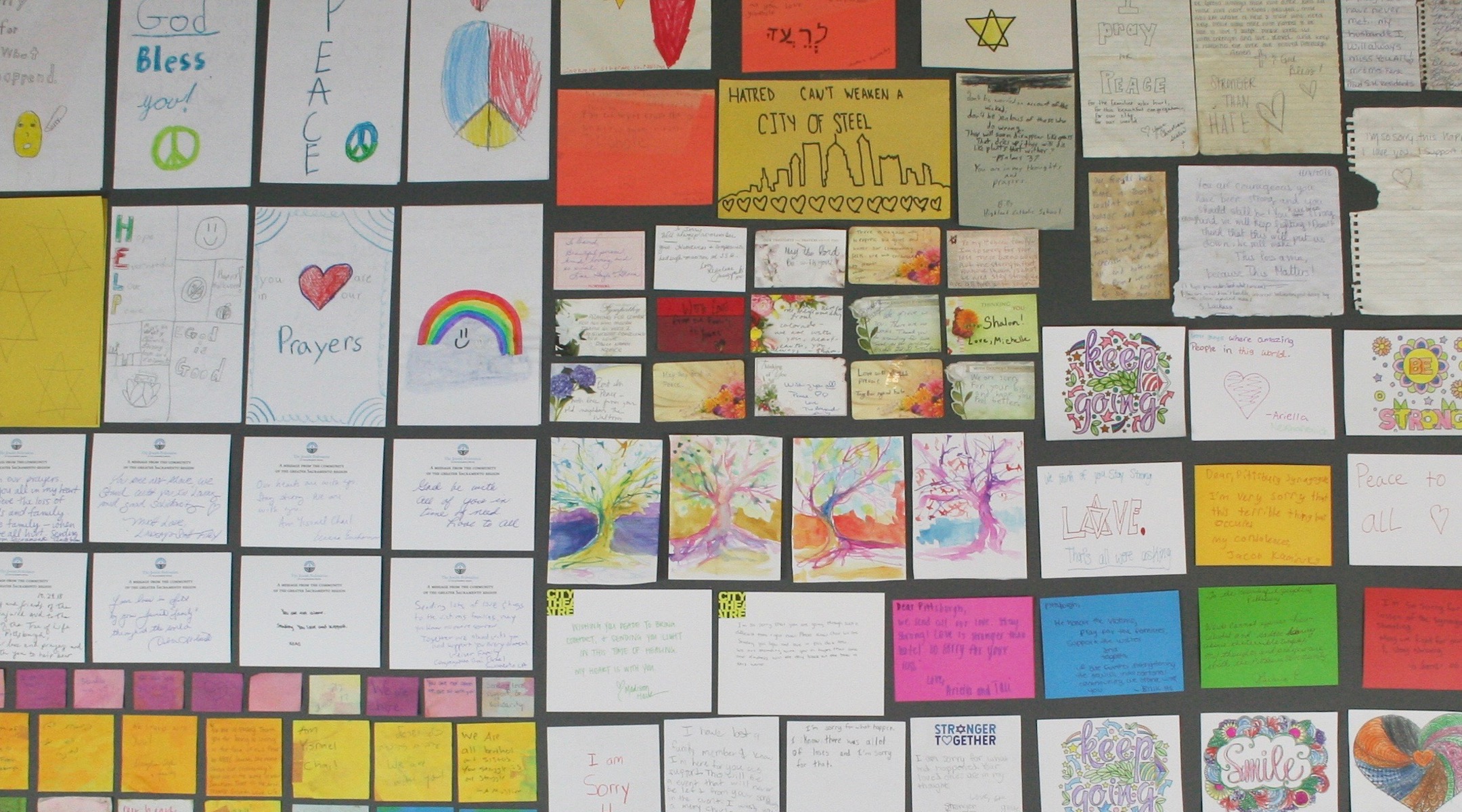 Lidji understood: Stones are what Jews traditionally place on gravestones. But the stones left at the Tree of Life synagogue were not to mark the victims’ final resting place but their place of death.

As the designated archivist of Pittsburgh’s Jewish community, Lidji has taken it upon himself to collect, preserve and document as many mementos of the shooting and its aftermath as he can find. Everyone in Squirrel Hill — the intimate Jewish neighborhood where the shooting took place — has been processing and remembering the attack in their own way. But aside from those who survived the shooting, Lidji’s labor of remembrance has been among the most physically tangible.

“Our constituency has not been born yet,” Lidji said. “The big thing that an archive does is it preserves original things so that people in the future can have access to something that was created a long time before they were born. This community is not going to forget this event for a long time, but there will come a time in the future when not only was most of the community born after this event, but maybe their parents were born after it.” 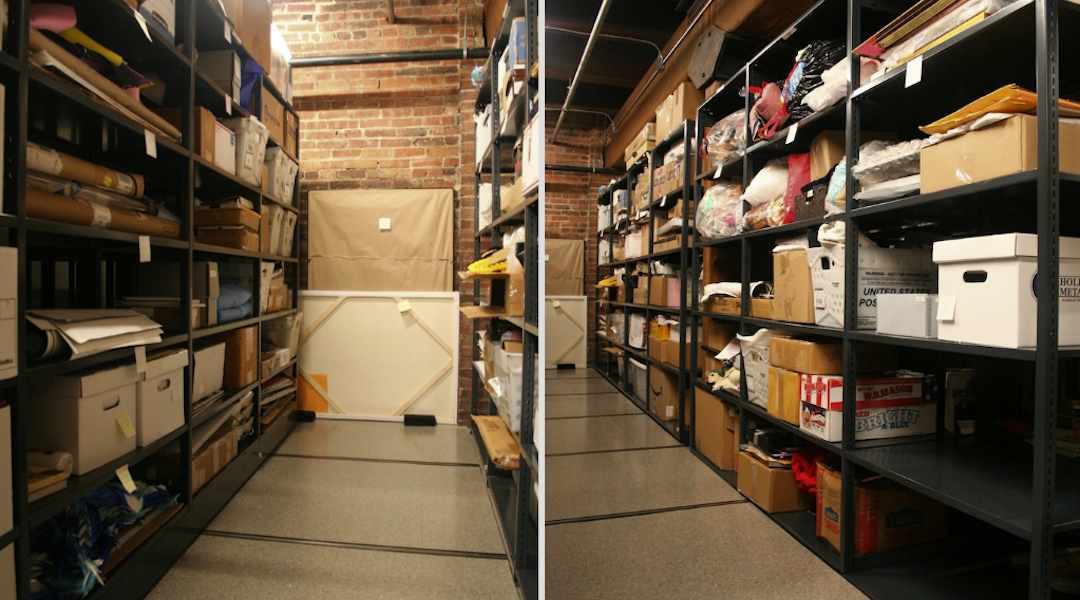 The Rauh Jewish Archives have stored thousands of memorial items on rows of shelves. (Courtesy of the Tree of Life Congregation and Rauh Jewish History Program & Archives)

For eight years Lidji, 36, has worked in various capacities at the Rauh Jewish Archives, which has been collecting the documentary and material history of the Pittsburgh area’s Jewish community for three decades. He became director two years ago.

Housed in the Heinz History Center museum, the archive consists of shelves upon shelves of boxes under fluorescent lighting. Lidji said a busy year for the archive would involve collecting about 100 linear feet of material, most of it decades old.

At last count, Lidji has collected 171 linear feet of memorial objects and notes connected to the shooting. Along with some staff and volunteers, he cleared all of the memorial objects from the synagogue grounds a couple weeks after the shooting, and then again about five weeks later around Hanukkah.

Lidji has also catalogued memorial items mailed to the synagogue over the past year. The majority of the collection is paper, including the very first item he collected: the program and seat cards for the vigil held the day after the shooting at Soldiers and Sailors Memorial Hall. He is also amassing a digital archive of articles, websites and social media posts related to the attack. 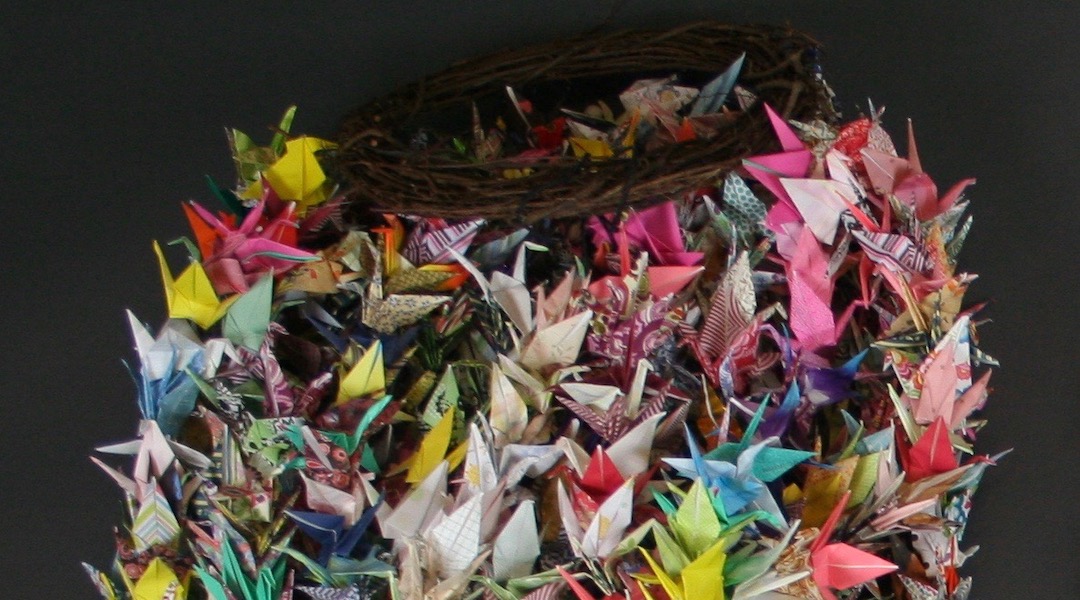 Origami cranes sent in memoriam of the Pittsburgh synagogue shooting. (Courtesy of the Tree of Life Congregation and Rauh Jewish History Program & Archives)

“A lot of the letters are so intimate that if you didn’t know what had happened, you would almost think the nature of the tragedy was something on the family level,” he said. “It’s really remarkable to watch people process a large public event on a personal level.”

One of the most intensive tasks was preserving the makeshift memorial that community members assembled around the synagogue. About a dozen people, most of them volunteers, brought thousands of individual items inside, laid them on butcher paper to dry them, separated out the notes and composted the flowers. The process took nine hours.

Lidji cannot publicly display many of the objects he has catalogued because most of the collection is owned by the congregations that prayed at Tree of Life, not the archive itself. But photos of the objects showcase a range of artistic and emotional responses to the shooting.

There is a tree painted on a wine bottle, perhaps an homage to the synagogue’s name. There is a wooden bowl, sent by a local church and filled with green paper cut in the shape of leaves, each one bearing a message of comfort. There is an intricate wicker Jewish star. Colorful rows of origami cranes. Quilted hearts. 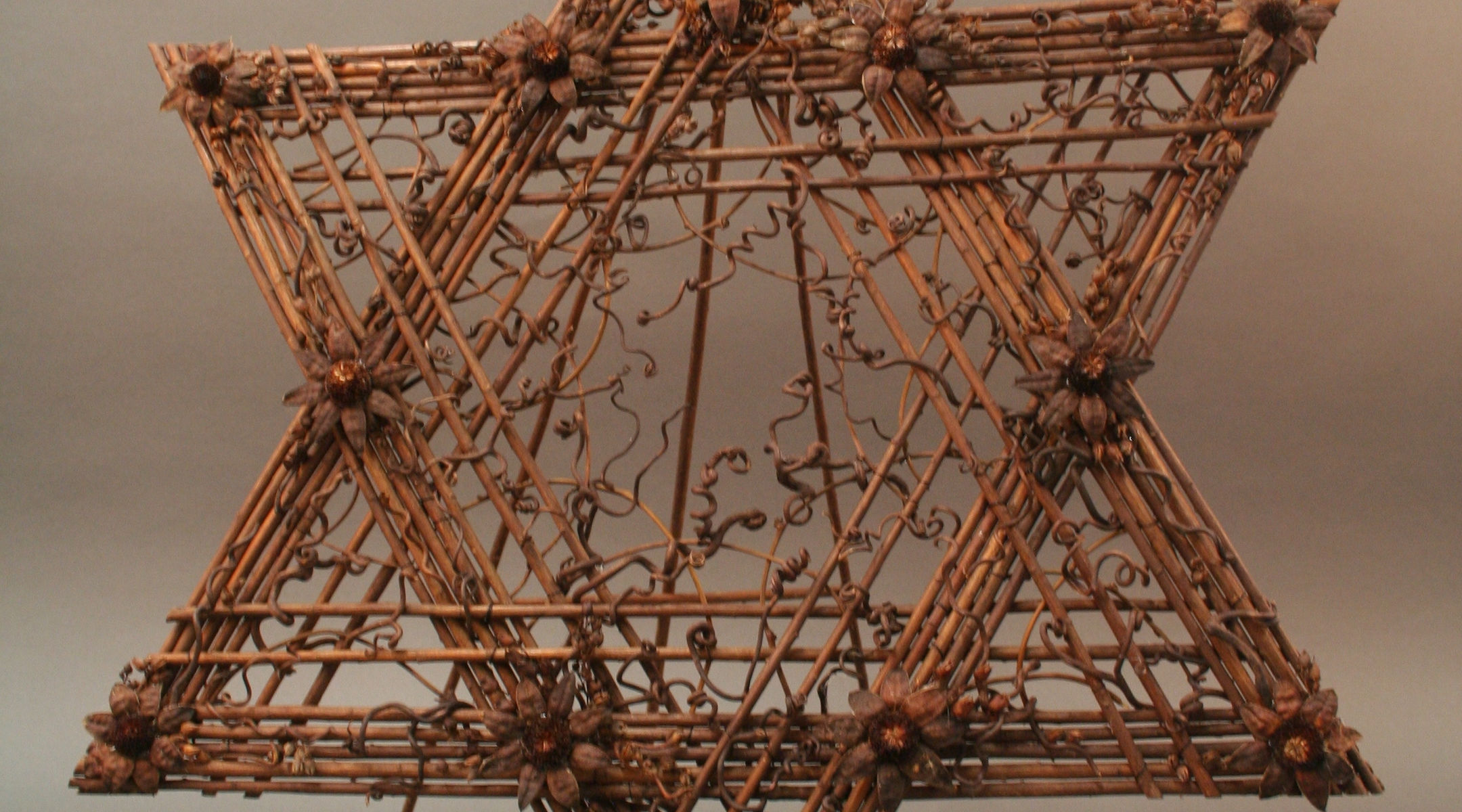 A wicker Jewish star sent in remembrance of the Pittsburgh synagogue shooting. (Courtesy of the Tree of Life Congregation and Rauh Jewish History Program & Archives)

“A lot of these things, especially the art objects, you get the sense that this is coming from someone who either is a professional artist or, if they’re not professional, art is such a large part of their life that this is how they process things,” Lidji said. “There’s something I find interesting about people bringing, almost as an offering, a piece of something that they do.”

Archiving the year of mourning, he said, has amounted to a second full-time job, as the regular work of the archive has continued apace. And even a year later, items continue to stream in. After the High Holidays, Lidji attempted to collect booklets from neighborhood synagogues that reference the attack and its victims.

“Whatever pain those of us who are several rungs removed feel is so vastly different from the people who were close to it,” he said. “What we’re dealing with is sad, and sadness is a part of life. It’s nice to have a role to play.” 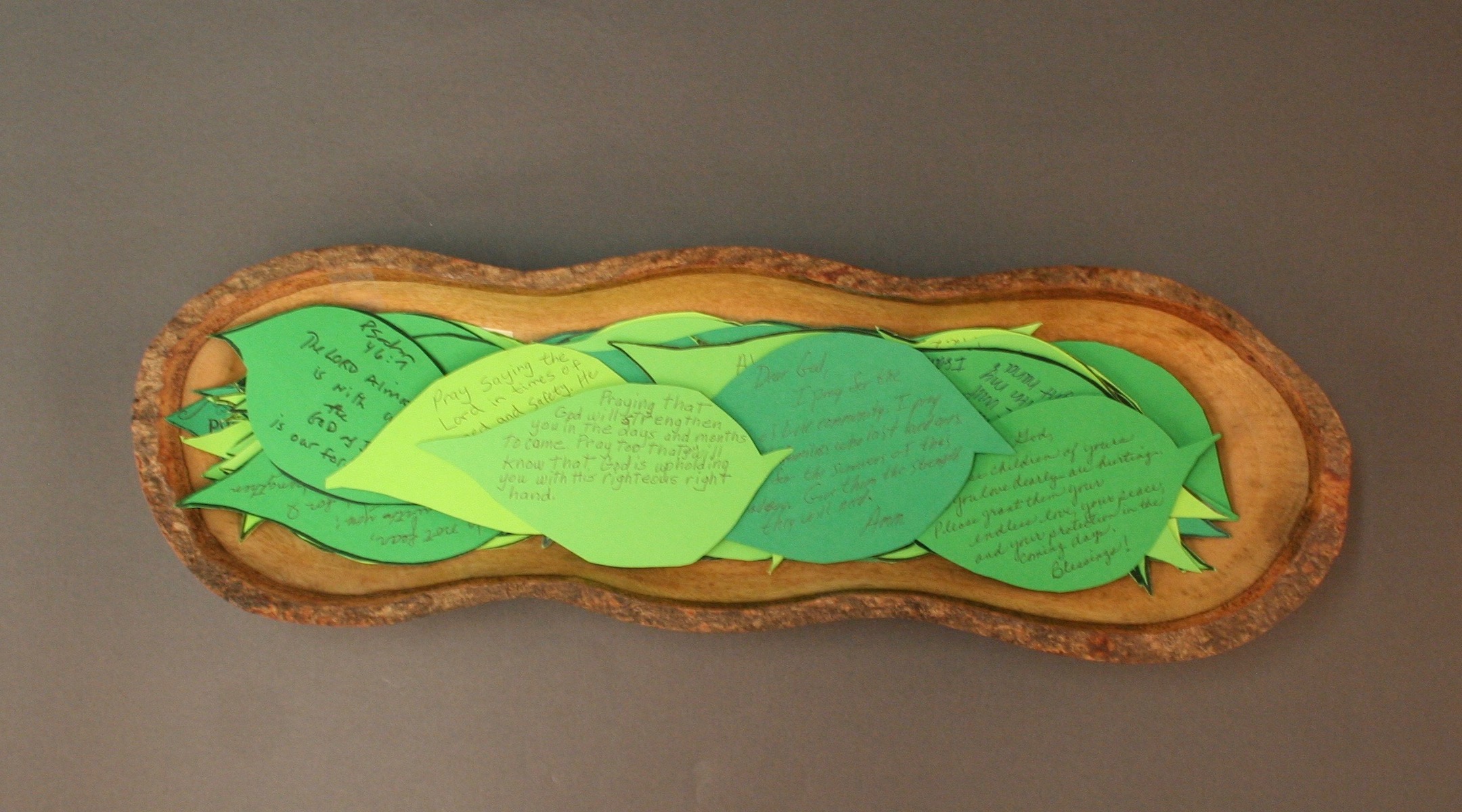 A wooden bowl holding notes of condolence shaped like leaves, sent by a church in Pittsburgh following the synagogue shooting. (Courtesy of the Tree of Life Congregation and Rauh Jewish History Program & Archives)