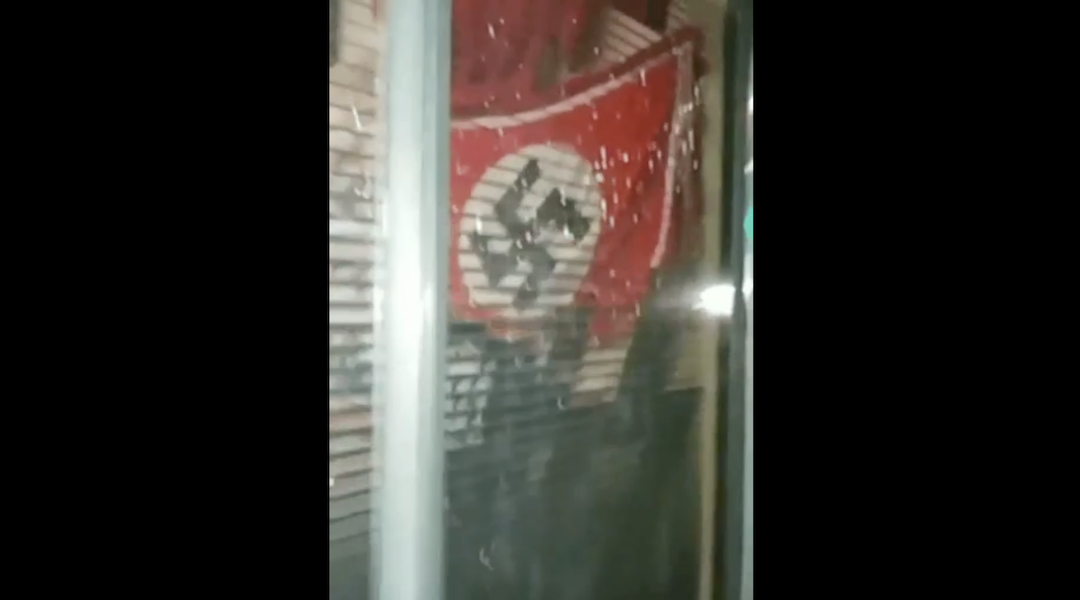 SAN FRANCISCO (J. The Jewish News of Northern California via JTA) — Why was a Nazi flag hanging on the wall inside a California parole office over the weekend?

The state’s Department of Corrections and Rehabilitation has launched an investigation to find out.

An anonymous video uploaded Saturday on Imgur, a video and photo sharing website similar to Instagram, shows a red Nazi flag with a black swastika in the center visible through the window of a CDCR office in downtown Sacramento. The video also shows what appears to be a second flag, black with SS bolts, hanging below it.

“This is a trashy way to represent this beautiful city, especially in a state building,” a caption on the online post read.

By Tuesday, the video had been viewed more than 23,000 times.

A CDCR spokesperson confirmed that the flag had been hung in its state parole office at 1608 T St. In a statement emailed to J. on Tuesday, press secretary Dana Simas said the office deals with high-level offenders and often comes into contact with “objectionable” items.

“While CDCR has a zero tolerance policy for the display of objects that are derogatory in nature, in an office that covers gang members and high-risk sex offenders we will come into contact with items that may be considered objectionable,” the statement read. “However, we take this issue seriously and have removed the item and are looking into the circumstances for why the flag was displayed in potential view of the public.”

Some of the items confiscated from offenders are “used as training tools,” Simas wrote. She did not say whether the flag was among them.

The Nazi flag was not the only wall decoration seen in the video. Also visible was a “Thin Blue Line” flag — a black-and-white version of the American flag with a blue line that represents law enforcement. Its popularity grew around the time of prominent demonstrations against police brutality in Baltimore, Ferguson and elsewhere. The flag is often associated with the Blue Lives Matter movement.

The Anti-Defamation League calls the Nazi flag, which has been adopted by white supremacists across the globe, “one of the most potent hate symbols worldwide.” It is banned in Germany.