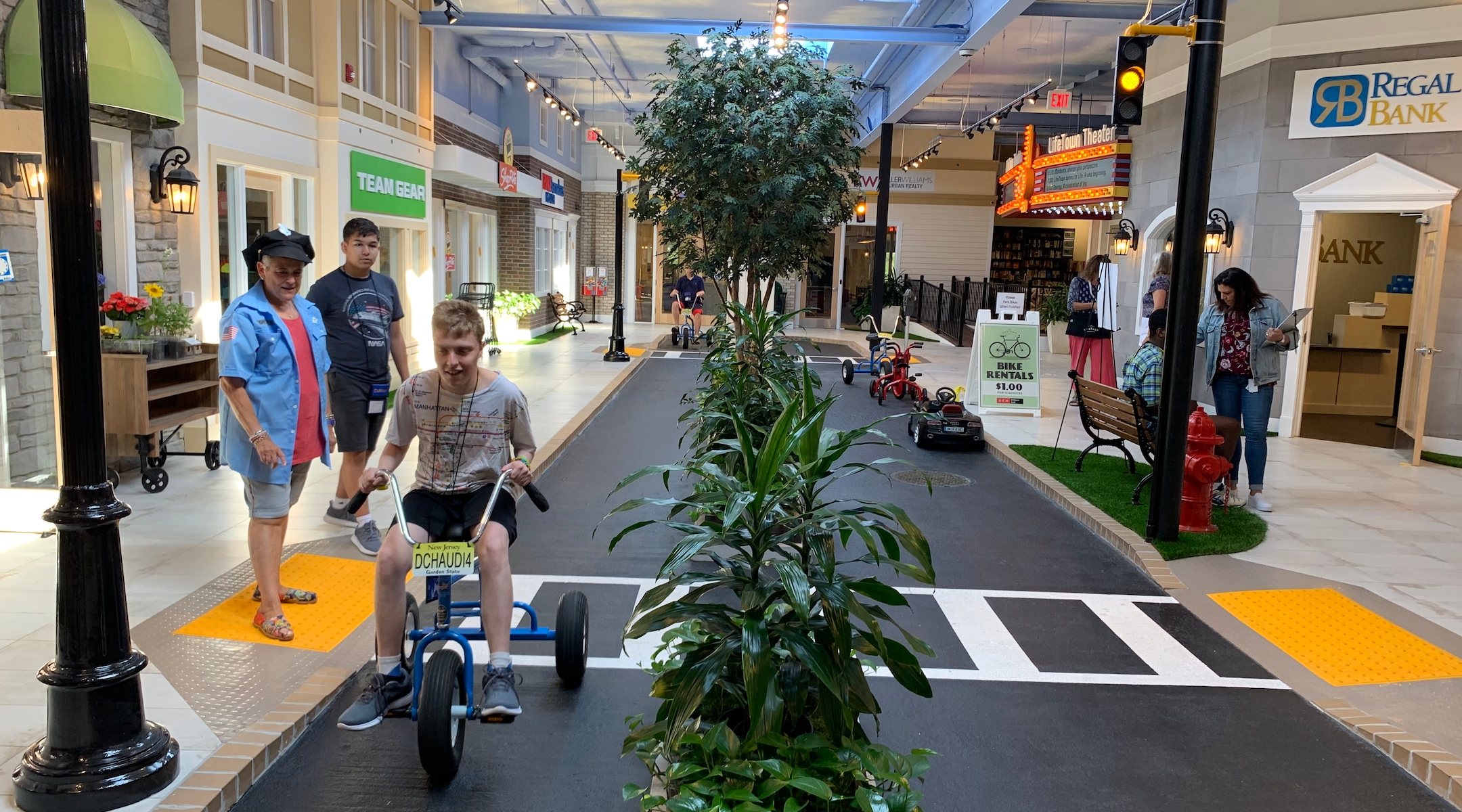 LIVINGSTON, N.J. (JTA) — A new 11,000-square-foot shopping center here is home to 15 storefronts, including a bank, pet shop and clothing store. There’s a health center with a dentist and doctor’s office and a ShopRite supermarket.

A traffic guard monitors the crosswalk, which is bisected by a plant and tree-lined strip. After a day of errands, visitors can treat themselves to a manicure at the local spa or a performance at the theater.

“It’s awesome,” said Bailey, a 17-year-old student who was having her nails painted sky blue at the nail salon.

Bailey has autism, and the shopping center, known as LifeTown Shoppes, is designed to help children and young adults like her practice doing everyday errands. Upon arrival, visitors withdraw $12 from the bank and then decide how to spend it, whether on snacks, theater tickets or a manicure. They get around on foot or with tricycles, but they have to obey traffic signals or risk getting a ticket. Volunteers staff the shops.

The shopping center is the most innovative part of a larger complex created by Rabbi Zalman and Toba Grossbaum, emissaries of the Chabad Hasidic movement who established the center to expand their work with special needs children beyond the Jewish community. 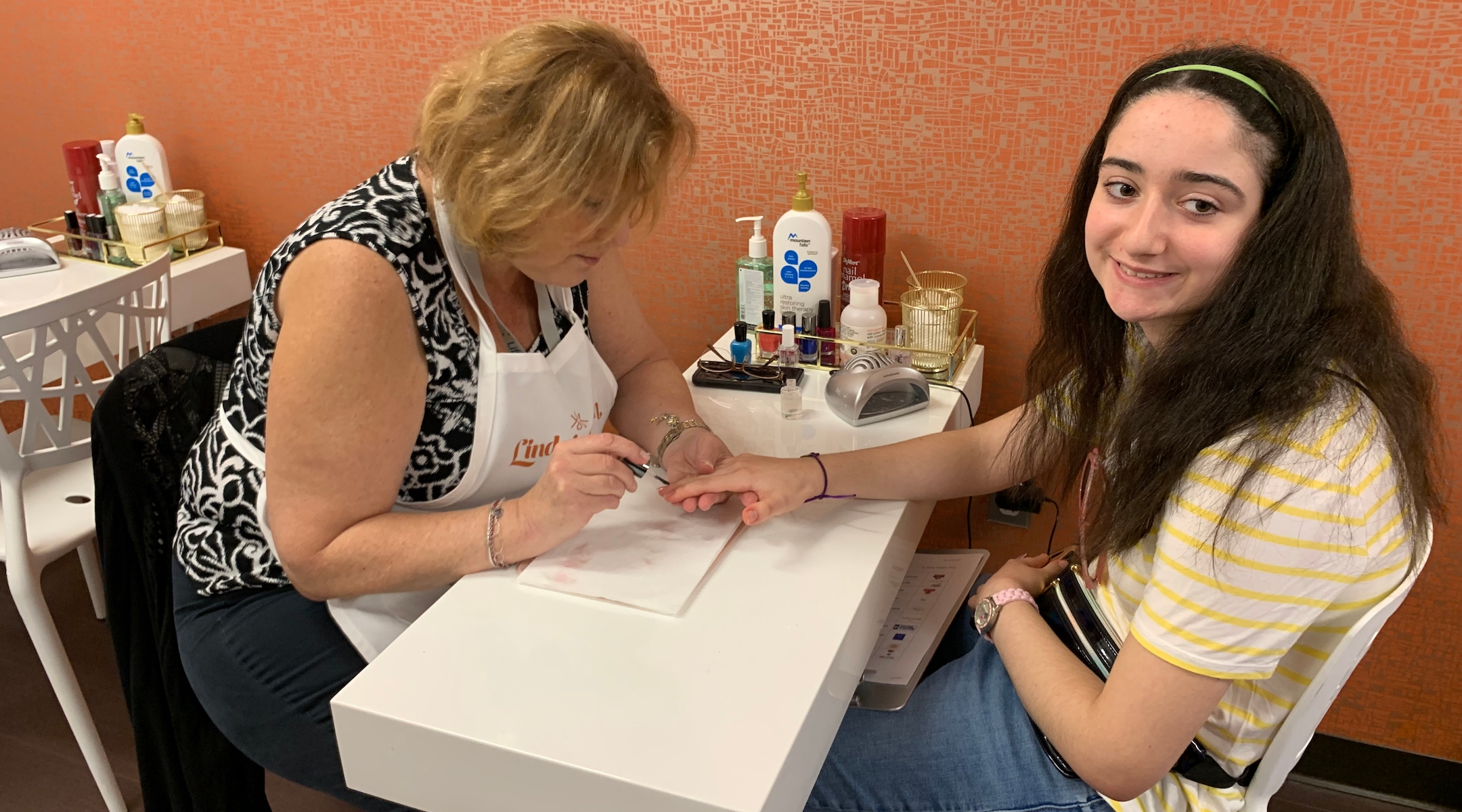 Bailey, 17, enjoys getting a manicure at the spa in LifeTown Shoppes. (Josefin Dolsten)

“We realized that there was a need in our community,” said Zalman Grossbaum, the CEO of LifeTown, the 53,000-square-foot facility that includes LifeShoppes.

The Grossbaums have lived in Livingston, an affluent North Jersey suburb of nearly 30,000 residents with a large Jewish population, for 23 years. Like most Chabad emissaries, they initially spent much of their time hosting Shabbat meals and Jewish learning programs in an effort to engage Jews from a range of religious backgrounds.

But the couple quickly found themselves catering to a number of special needs individuals. New Jersey has the highest rate of autism in the country, according to the Center for Disease Control. One out of every 34 8-year-olds is diagnosed with the developmental disorder, which is associated with difficulties with social skills and communication.

In 2000, the couple started a local branch of the Friendship Circle, an international Chabad initiative that runs programs for special needs children. But that effort was aimed solely at Jewish children.

“One of the things we’ve always felt bad about is turning down other families,” Grossbaum said. “We couldn’t respond to them because we didn’t have the means by which to respond to them, so we always felt that we needed to do something to be inclusive of the entire community.” 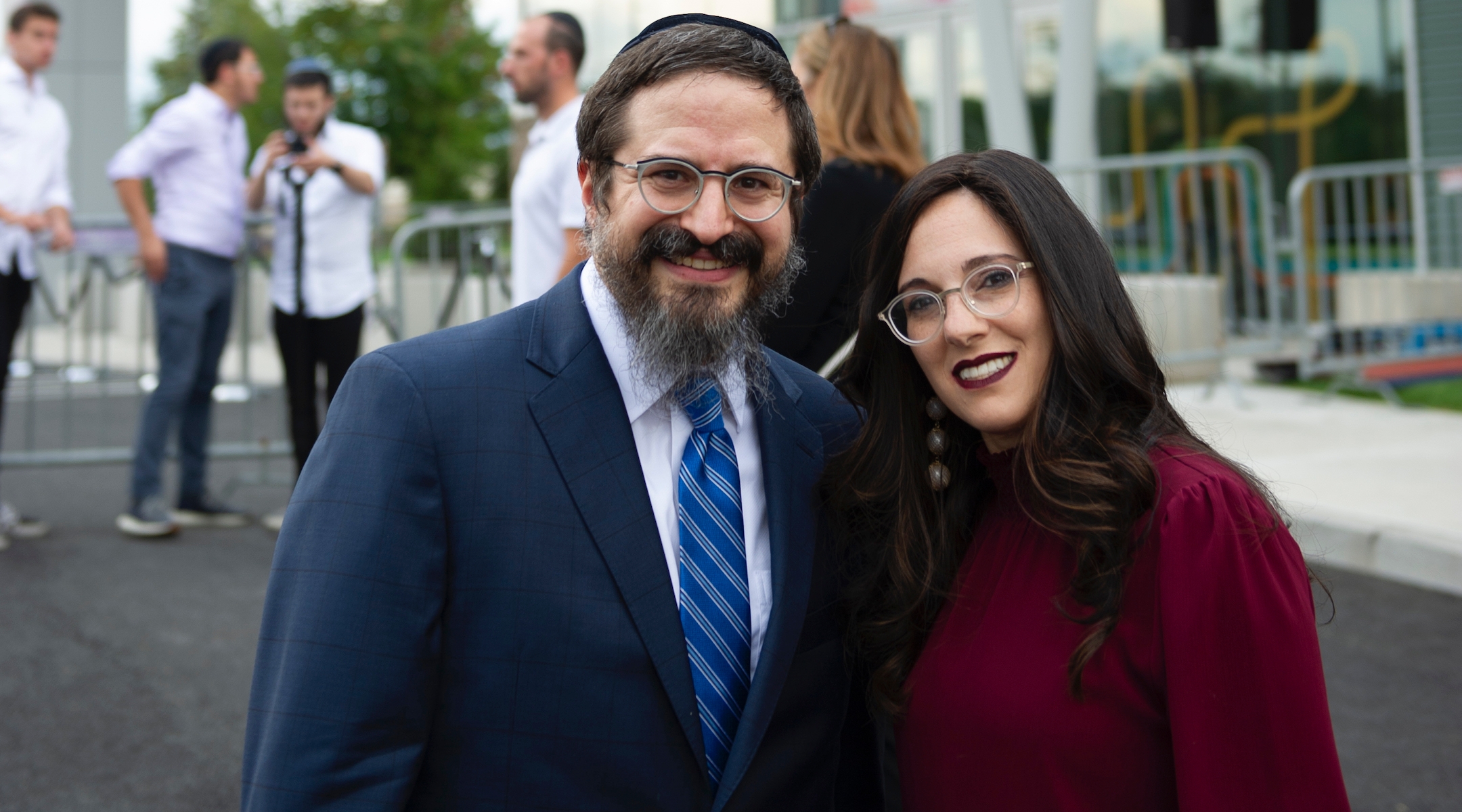 In 2013, the Grossbaums acquired a warehouse and began running programs there. They tore it down in 2016 and built the current facility, which includes a swimming pool, art gallery, dance studio and football field. LifeTown offers art, water, light, sound, sensory and occupational therapy to people with special needs. Participants come as individuals and with school outings.

The Grossbaums have funded the center through private donations along with support from foundations and local businesses. The football field was funded by the New York Jets and the National Football League in concert with other donors. The Grossbaums have raised $18 million, but they are still soliciting donations for an expansion to include an outdoor park and a bowling alley.

Most of the programming at LifeTown is targeted to the Jewish community. Challah baking classes and religious services are offered, and there is a replica of the Western Wall where visitors can place written prayers. But the interactive shopping center is open to schools and visitors regardless of religious affiliation.

“That gives me so much joy to see the community as a whole, the larger community be able to benefit and come to a place that is very obviously Jewish, and they know that we are there helping,” Grossbaum said.

In building LifeTown, the Grossbaums were inspired by the Chabad emissaries in Michigan who founded the Friendship Circle and built a smaller version of LifeTown Shoppes. 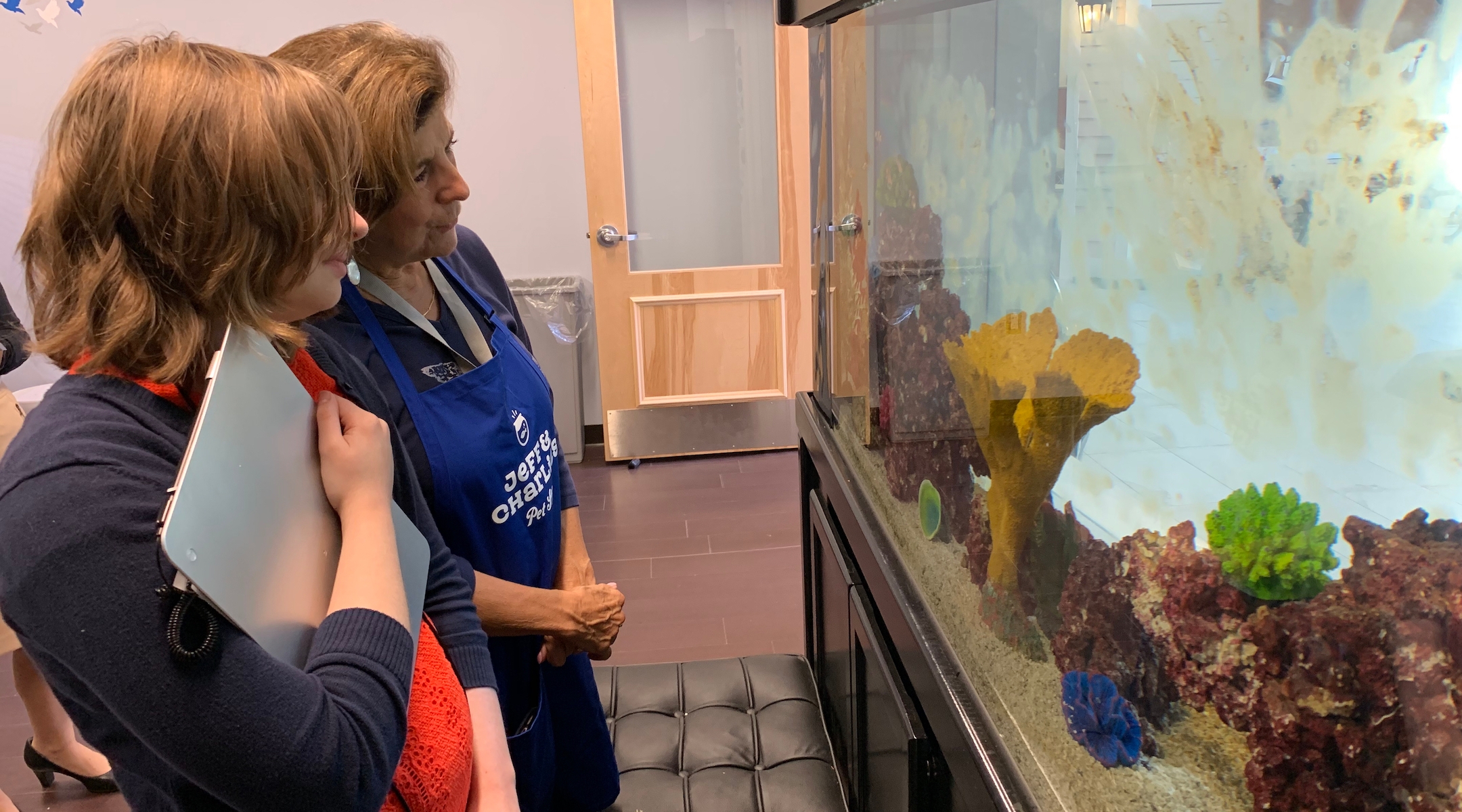 Sophia, 16, views the aquarium at the center’s pet store together with a volunteer. (Josefin Dolsten)

Since its opening last month LifeTown Shoppes, which can accommodate up to 100 students at a time, has welcomed visitors from seven schools. Another 50 are scheduled to visit in the coming months.

Laura Schreibman, an autism expert and emeritus professor of psychology at the University of California, San Diego, said an environment like LifeTown Shoppes is a great way to help autistic kids develop important life skills, but it’s important to make sure those skills transfer to real-life settings.

“Once the children can handle this supervised setting, it would be important to generalize the skills to other stores,” she wrote in an email to the Jewish Telegraphic Agency.

Last month, 16-year-old Sophia visited the center with Bailey and other students from Academy360, a nearby school for kids with autism. She spent some time in LifeTown’s pet store admiring the fish and guinea pigs.

Sophia enjoyed receiving money when she walked in and deciding how to spend it.

“It feels like I am becoming more responsible,” she said.