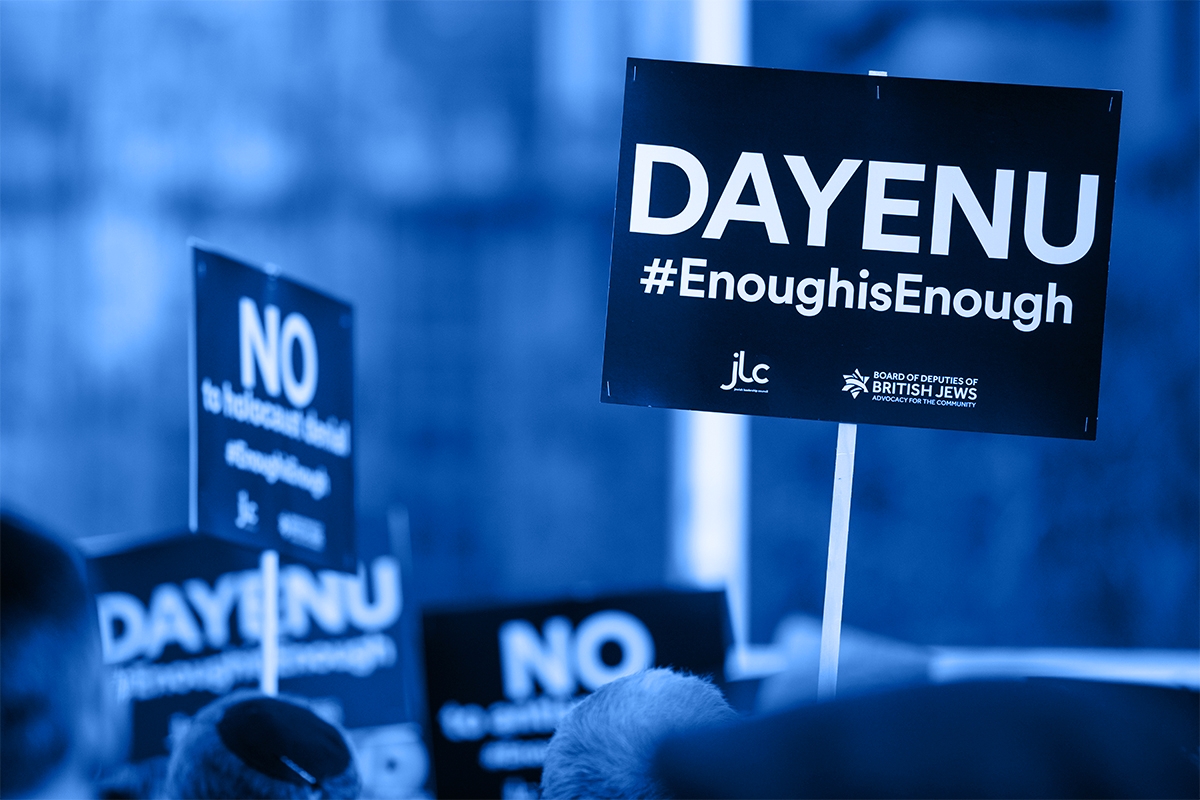 Everything was going well until I checked my phone. I had just finished teaching Sunday school at a synagogue in Evanston, Illinois, and was on the bus that would take me back to my apartment on the far north side of Chicago. It was a beautiful day. Sukkot would start in the evening. And then I opened Facebook and found a succession of horrifying posts.

Temple Emanuel, the synagogue I used to teach at in my hometown of Grand Rapids, Michigan, had been vandalized some time late Saturday night or Sunday morning. The posts from former co-workers were vague at first and referenced “messages of hate” that were posted on the main doors — the same doors children use when they come to religious school on Sunday mornings.

I tried very hard not to throw up on the bus. I made it to the train station and took the train to the campus library, where I studied for several hours trying not to feverishly check my phone for updates.

The Grand Rapids Jewish community is small, which has its challenges (especially when it’s time to do Passover shopping and families are split between traveling to kosher grocery stores in Detroit and Chicago). Fortunately it’s also extremely close-knit. The Reform and Conservative congregations and the Chabad House frequently collaborate on community events, and everyone goes to each other’s simchas (celebrations).

This also means that such a blatant display of overwhelming hatred is all the more devastating.

Not many details had been released before it was time to turn off my phone for Sukkot. The transition from regular time to holiday time, which already feels like floating in a parallel dimension while watching everyone else around you rush to work and school, can be difficult in normal circumstances, let alone when you’re desperate to know if everyone in your hometown is doing OK. When I turned my phone back on Tuesday night, the story had gone viral. Local news released images of the posters, which had disturbing images and Nazi slogans. There was coverage on CNN and The Jerusalem Post. There were well-meaning comments from people saying “this is not West Michigan.”

This is exactly what West Michigan is. Beyond the facade of “West Michigan Nice” lies a pernicious moral rot that anyone marked as an “other” has encountered. It can be found in the panicked texts that a friend sent me on a Saturday night because an angry driver was so focused on flipping them off on their walk to synagogue that he almost crashed his car. It can be found in how every single one of my queer and trans friends has lasting trauma from the hatred they experienced all through elementary, middle and high school. It can be found in a recent case where a local real estate company filed a restraining order against a black woman who left them a poor review on social media because her rental application was denied — despite following all their application requirements. It can be found in the fact that I didn’t feel comfortable putting a mezuzah on my door when I lived there because a Nazi-friendly bar was in my neighborhood.

Each synagogue in Grand Rapids has had tight security for years, including cameras, locked doors and constant contact with police. We had Sunday school the day after the Tree of Life shooting in Pittsburgh and the rabbi greeted every family with a team of squad cars parked in the parking lot.

In the aftermath, the synagogue began fundraising for changes to the building itself. I worried about how going to Sunday school in a locked building with security guards and infrequent patrols by police would impact students there. I worried about if we could trust local law enforcement to actually protect our community after a string of high-profile cases of police misconduct, including an officer reporting a U.S. citizen and disabled veteran to ICE.

I texted the group chat for students in my graduate school cohort Sunday afternoon and received positive messages of support, including one student who called me as I was taking the train back home. When I returned to class, students gave me a card with messages of support. Friends in Grand Rapids donated to the synagogue security fund and gave money to my Jewish friends to buy coffee. My fifth-grade Sunday school students also drew cards. But having to stand in front of them and share how I had felt scared and angry was terrifying.

I want my students to never have to feel scared of being Jewish, or feel that being Jewish is something they need to hide and minimize. I also don’t want to minimize the real threats facing the community. Being Jewish throughout history has always been a tricky balancing act between refusing to assimilate and being cowed by fear while also having one eye on the exits.

I wish I had some nice positive thing to say at the end of this essay. I could cite the famous verse in Pirkei Avot (“You are not required to finish the work, but neither are you free to abandon it”) or talk about how my students and classmates helped fix a broken part of the world by expressing their sympathy.

But right now I just feel numb and hollow. My main request is for non-Jewish folks to do any concrete action beyond expressing how bad they feel about anti-Semitism. Buy your Jewish friends lunch. Offer to walk someone to and from synagogue on Shabbat. Make an active effort to learn more about anti-Semitism. Donate to a local Jewish organization. Pity and empty expressions of solidarity are patronizing and useless. Actions, no matter how small, are what keeps us safe.