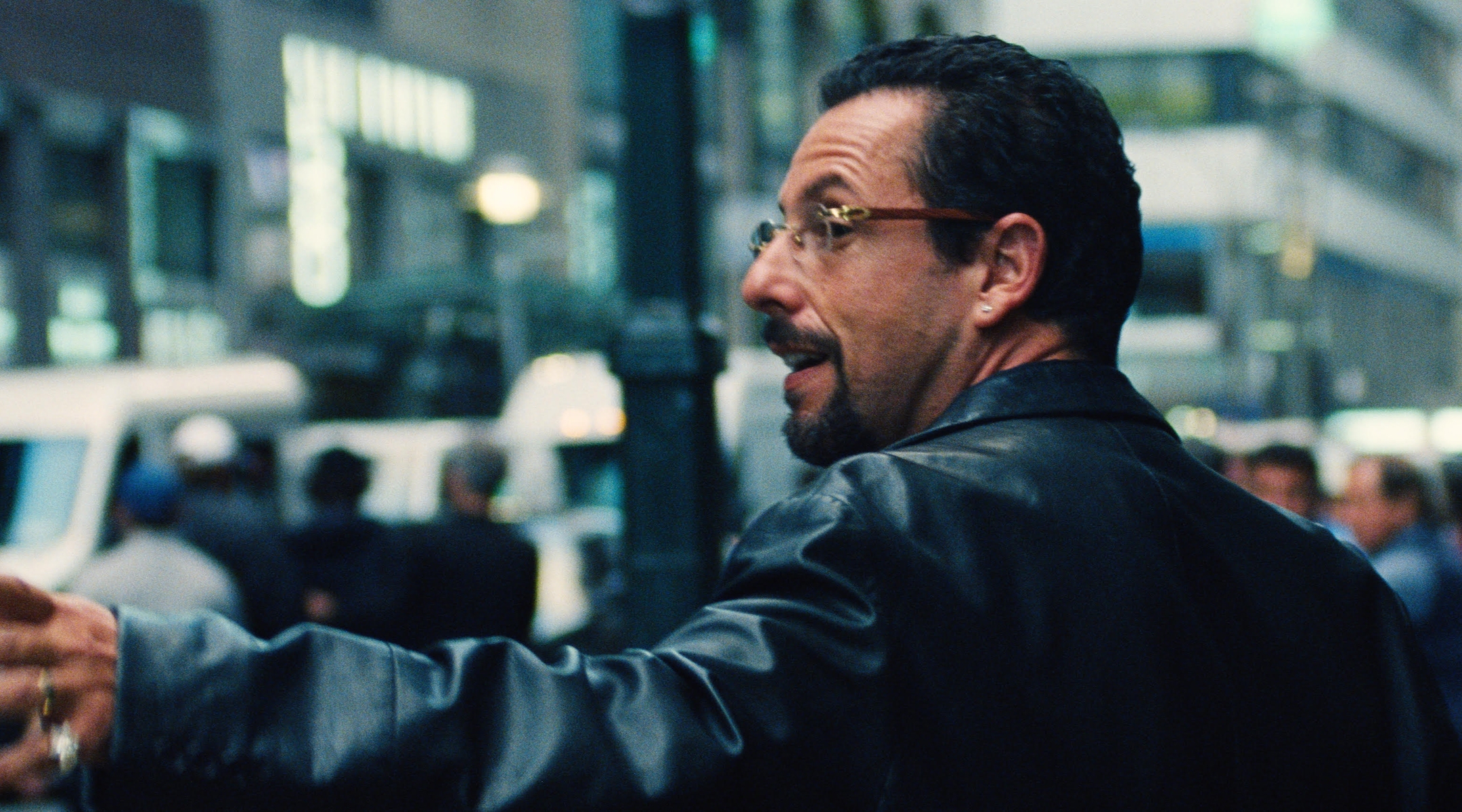 NEW YORK (JTA) — As soon as I got out of a recent screening of “Uncut Gems,” I had to share the feelings of sheer cinematic bliss I had just experienced nonstop for two hours.

“Just got out of ‘Uncut Gems,’ the new Adam Sandler movie coming out. He is sooooo good in it,” I texted my friend.

“Oh cool! What’s it about?” she responded.

“He plays a sleazy diamond dealer,” I said, adding a laughing emoji.

“Wow! So he does dramatic movies? Pulling a Steve Carell!”

She wasn’t exactly living under a rock: Sandler is obviously best known for his many potty humor comedies that pimply teenagers love and their parents hate. Some film fans are aware that he’s also come into his own as a dramatic actor over the past couple of decades. His foray into that world started around 2002 with Paul Thomas Anderson’s bizarre “Punch-Drunk Love,” and continued most recently in Noah Baumbach’s “The Meyerowitz Stories (New and Selected)” in 2017.

But the name Adam Sandler in pop culture still evokes that feeling one might experience after lighting a bag of poop on fire on your nemesis’ doorstep: I’m laughing at this, but I feel dirty doing so, and I shouldn’t be. Or perhaps, especially for Jews, his name brings to mind the lovable Hanukkah song.

That could be about to change. His performance in “Uncut Gems” might just bring him an Oscar.

“Uncut Gems” is the sixth film by Josh and Benny Safdie, a pair of thirtysomething Jewish brothers who have earned serious acclaim for their gritty indie works that probe the New York City underworld — like “Heaven Knows What” (2014), about a homeless heroin addict, and “Good Time” (2017), which stars Robert Pattinson as a bank robber.

In “Uncut Gems,” Sandler plays Howard Ratner, an unscrupulous jeweler in New York’s extremely Jewish Diamond District. Howard’s marriage (to Dinah, played with steely resolve by Idina Menzel) is in tatters after he has had an affair with a young employee in his shop, and he has a debilitating gambling problem. He pools money he makes from sales and under-the-table deals to bet impulsively on NBA games, and is in debt to the kinds of characters whom no one wants to be indebted to. 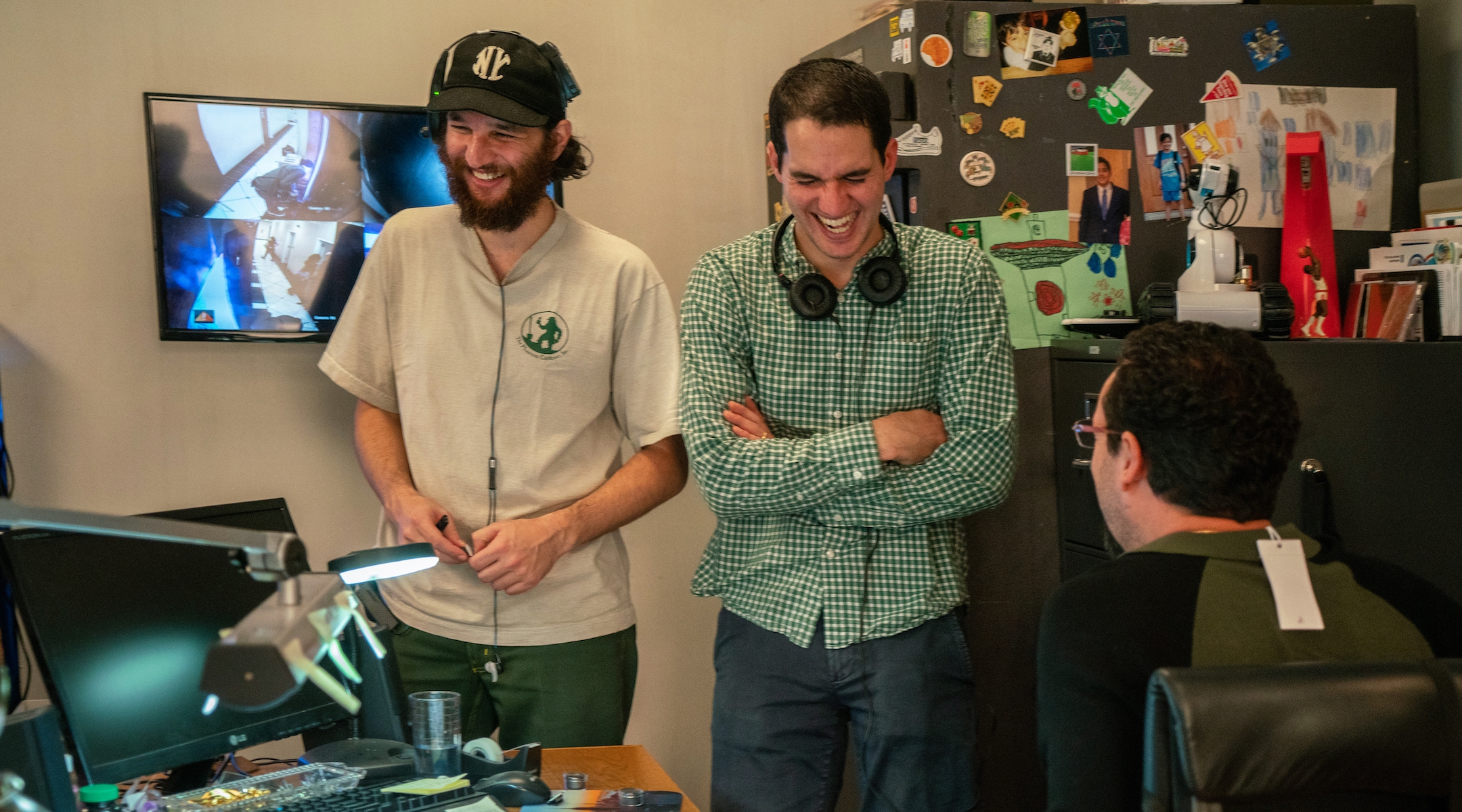 From left, Josh Safdie, Benny Safdie and Adam Sandler on the set of “Uncut Gems.” (Wally McGrady/Courtesy of A24)

But there’s so much more going on here above and below the surface that words on a page won’t do the visceral experience of watching the film justice. It’s a frantically paced freight train of suspense and emotion capped off with a bombshell ending. It’s full of nuanced underlying commentary on consumerism, the downsides of international trade, addiction, family life and even basketball — former NBA star Kevin Garnett portrays himself in a slightly alternate universe in which he believes a rare stone that Howard lends him improves his play on the court.

The film also deeply explores modern Jewish identity. Like the Safdies, who are distant relatives of the famed architect Moshe Safdie, Howard is part of a tight-knit Syrian Jewish clan rooted in New York City. While he fits in comfortably among the other Jews of the Diamond District, he is still a proud outsider to the wider world of wealth with which he regularly interacts. His Jewishness defines him to that world — to Garnett and his posse, he’s a “crazy Jew,” not a crazy jeweler.

The Garnett role was actually written with Amar’e Stoudemire — the fellow former NBA star who has converted to Judaism and played pro ball in Israel — in mind. A large part of the plot revolves around an opal from Ethiopia that takes on a mystical significance for everyone who comes in contact with it. Howard believes it’s a kind of gem coveted by Ethiopian Jews, which endears it to him even more.

Through it all, Sandler is uncannily good. He deploys a subtle but idiosyncratic ethnic New York accent. He oozes an eagerness to please his many clients and the many people he owes money to. He explodes with frustration when conflict caves in on him. Sandler not only keeps up with the film’s frenetic, disorienting pace — he pushes it forward.

The now 53-year-old actor has been great in dramatic form before, perhaps most notably in “The Meyerowitz Stories.” But this is a new level for Sandler, an intense character study that ranks alongside other Oscar-winning performances from years past.

In fact, Sandler just beat out the likes of Joaquin Phoenix, Robert De Niro and Adam Driver to win the National Board of Review’s award for best actor, an early indicator of Oscar success.

The Safdies originally wrote the lead role for Sandler, but he didn’t see the script for years. As he told sports radio host Dan Patrick in a recent interview, Sandler’s manager kept it from him at first, thinking it wasn’t a good fit. 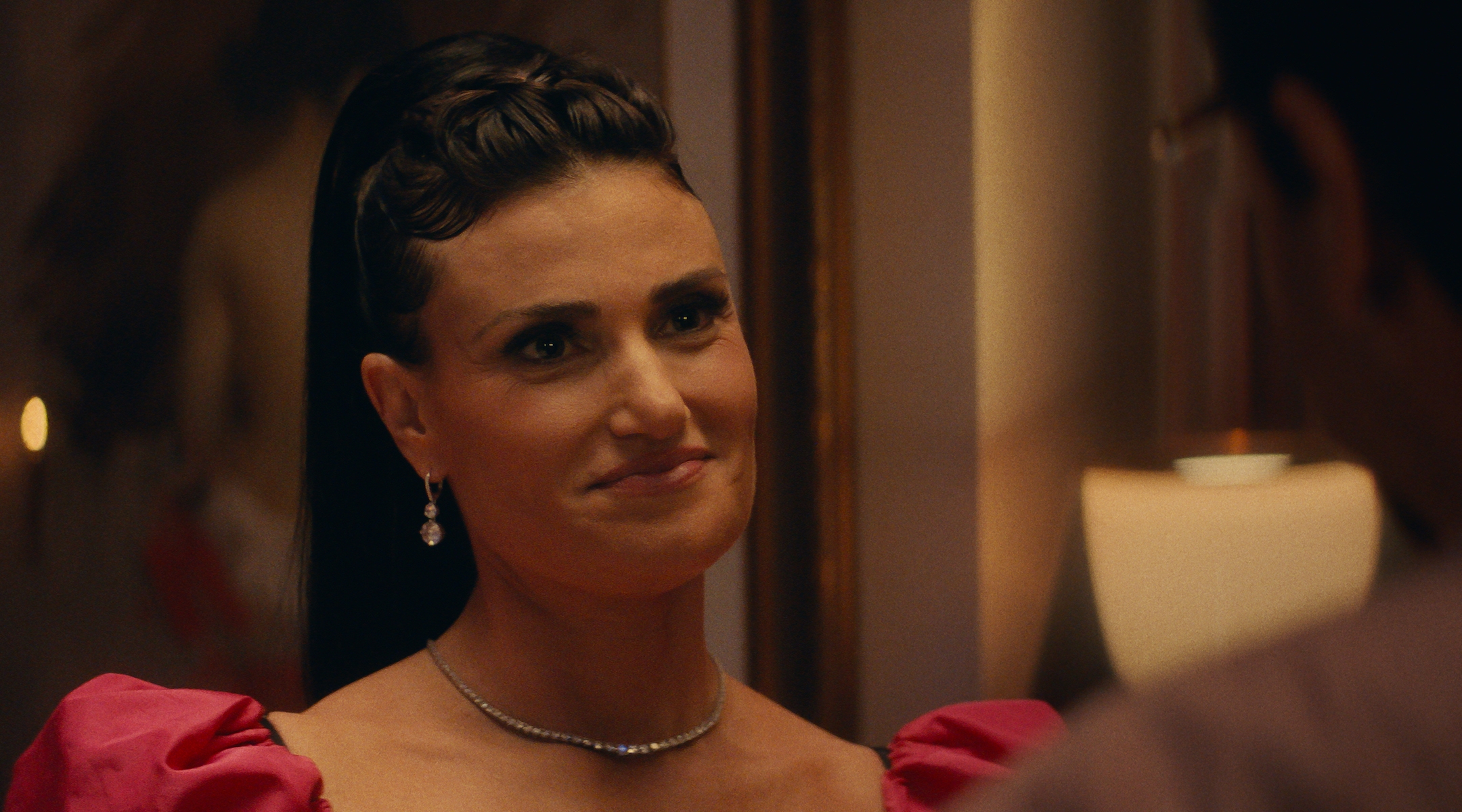 Idina Menzel in her character’s old bat mitzvah dress in “Uncut Gems.” (Courtesy of A24)

“Maybe he was right, I was a little young for that movie 10 years ago,” Sandler said.

Years later, after seeing some of the Safdies’ other films (and after Jewish actors like Jonah Hill and Sacha Baron Cohen were considered for the part), Sandler grabbed the role. But he went on in the Patrick interview to describe how scared he was at tackling the dark character.

“I read the script and I was terrified … I said, ‘I’m terrified to do this, it’s two months of being this guy,’” he said.

Sandler would call his wife at times while filming, asking for her help to prepare for an emotional scene. But eventually it clicked.

“I grew to love being the guy,” he said.

“Uncut Gems” gets a limited release Dec. 13 before a nationwide release on Christmas.