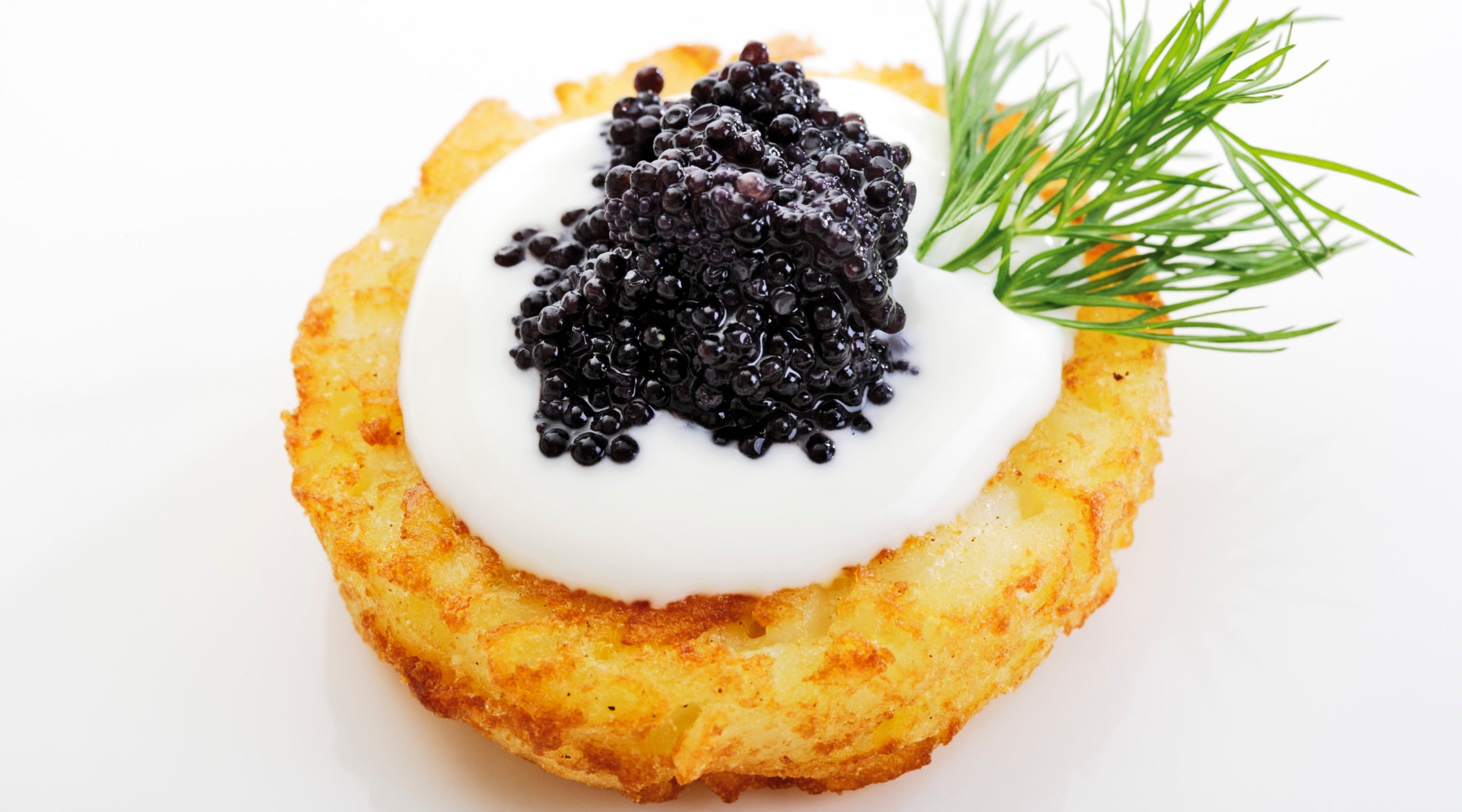 A recent holiday issue of Food & Wine magazine featured a piece titled “8 Ways to Make the Best Potato Latkes of Your Life.” The problem? Two of those luxe latkes featured decidedly non-kosher toppings.

One latke calls for both shrimp and squid, foods that are biblically forbidden to kosher-keeping Jews. The other features a combination of brisket and creme fraiche — these ingredients can be kosher on their own, but consuming dishes containing both meat and dairy is also a kosher no-no.

I retweeted a photo of the article asking (rhetorically) what the big deal was, given most Jews don’t keep kosher and the prominence of Jewish chefs like Ina Garten, whose tender preparation of roasted shrimp cocktail louis recently had me salivating on a long flight even though I keep kosher (and consuming shellfish would send me straight into anaphylactic shock).

88% of Jews (per Pew Report) don't keep kosher in their homes, and professional Jewish cooks who teach the masses how to make both trief and traditional Jewish dishes (Ina Garten, anyone?) abound. Why shouldn't Food & Wine cater to the majority? https://t.co/qmt3AJODgA

Though I’m an Orthodox Jew and no stranger to Jewish traditionalism, I greatly underestimated how deeply this article would resonate with many Jews across the religious spectrum, for better or worse.

The responses to my tweet quickly poured in: Some were deeply offended by the presence of treif in recipes for a Jewish holiday all about fighting assimilation; some rejoiced that a secular American magazine featured Hanukkah at all; some didn’t quite know what to think.

Dozens of these thoughtful comments and one insistent colleague later, I decided to do some actual journalism and call the man behind the latke mischief himself.

Marcus  Jacobs, 34, is the chef at Marjie’s Grill in downtown New Orleans and the man whose recipes and traditional latke prep techniques are featured in Food & Wine. Marjie’s food is, in the restaurant’s words, “inspired by Southeast Asian bar food and the local bounty of the Gulf South” — and a casual observer will notice that the treif practically leaps off the menu, so to speak.

On Monday, I spoke to  Jacobs between his afternoon errands. The Ohio native, who grew up in a Reform Jewish household, has been working in kitchens since age 14 and has lived in New Orleans since 2009. He also sports a Hipster or Hasid-worthy beard, adding to the delicious irony.

Get that Goat! We’ve got the heater turned up and this hot BBQ @homeplacepastures goat shoulder rubbed with habanero and Tobasco mash, slow smoked on oak logs & smothered with herbs, chilis and galangal! #onlyatmarjies #toasty #spicyboi

Jacobs described latkes as “not something that would typically fit within our mission statement” at his BBQ-centric restaurant, which changes often based on “whatever is good at the market.”

But when Marjie’s Grill opened three years ago on Dec. 20, Jacobs, his business partner Caitlin Carney, 35, and another Jewish cook they employed started frying up latkes as a familiar comfort food for themselves.

The crew even put out menorahs to mark the holiday, and once the word spread, as Jacobs puts it, “it kind of developed a life of its own.”

“Once people became aware that we were lighting candles, doing the prayers and serving latkes, we got this really big boost of support; the New Orleans Jewish community is generally underserved,” Jacobs told me, and the sense of community the decidedly non-kosher restaurant began to foster was palpable.

Both Carney and Jacobs were raised Jewish — like most Jews, they never really kept kosher.

“We’re maybe not the most heavily practicing folks,” Jacobs said. “You come in this very casual setting and have latkes, a bit of familiarity and a nice nostalgia.”

And while the food certainly isn’t kosher, Jacobs said the tradition has gone a long way toward building community in the Big Easy.

“Moms of Tulane kids began calling to order a dozen for their kids,” he told me.

Jacobs said he hadn’t seen any of the Twitter ire.

“New Orleans is such a casual town in so many ways that locally we haven’t had any backlash. We are not in a synagogue, we are a restaurant that serves shrimp and crawfish and fried pig feet,” he said. “Any argument that we are supposed to be kosher [is missing the point].”

“I always engage with people if they want to talk or complain, that’s my job as a person in hospitality. But people need to lighten up. We’re not doing anything to affront the Jewish people.”

To me, if a Jewish chef wants to adapt traditional recipes from his culture to fit a more secular palate, more power to him or her.

But this whole controversy perfectly illustrates the ancient debate of who owns Judaism and its traditions. The first Hanukkah, after all, was a bloody battle between the religious fundamentalist Maccabean minority and the Hellenized majority, which included many Jews. Who does Judaism ultimately belong to today — the secular majority of Jews or the religiously fundamentalist minority?

If Judaism is primarily a religion, then Orthodox Jews like me might most easily make the case that they are the sole authentic heirs of tradition — and the latke naysayers are thus right in finding treif-laden latkes an affront.

But if Judaism is just as much a culture, a history, a people and an idea, then the 90 percent of American Jews who aren’t Orthodox — the majority of whom don’t keep kosher — have just as legitimate a claim to the Jewish legacy. And that includes tinkering with traditions, even when some might take offense.

According to the American Jewish Population Project, Greater New Orleans, where these controversial latkes originated, is home to approximately 15,000 Jews. Due to a variety of economic and cultural factors, that community has long been dominated by Reform and secular Jews: As early as 1842, a visiting Jewish journalist surmised that “although the political atmosphere is so liberal that a Jew could win unanimous election to the legislature, only four homes kept Kosher, only two followed the laws of Shabbas, and two-thirds of the boys were not circumcised.” The city’s first philanthropist, Judah Touro, donated hundreds of thousands of dollars to Jewish institutions, but was often more interested in supporting local churches while he lived than in helping build the city’s Jewish community.

NOLA’s very tolerance has both allowed Jews to flourish in a climate often unfriendly to outsiders and assimilate with ease. Was the trade-off worth it?

Hanukkah is full of contradiction. It was a bloody fight for the soul of Judaism that required killing other Jews. It’s a holiday celebrating divine intervention and anti-assimilation — and has long been the holiday most widely celebrated by secular Jews.

I know many will bristle at my conclusions. But in America, insisting on Hanukkah originalism would be like insisting that American Christmas revolves around the sacred birth of Jesus Christ. Maybe in original intent, but certainly not in common practice.