Orthodox Jews tried to build a home in Jersey City. Then a shooting terrorized their community. 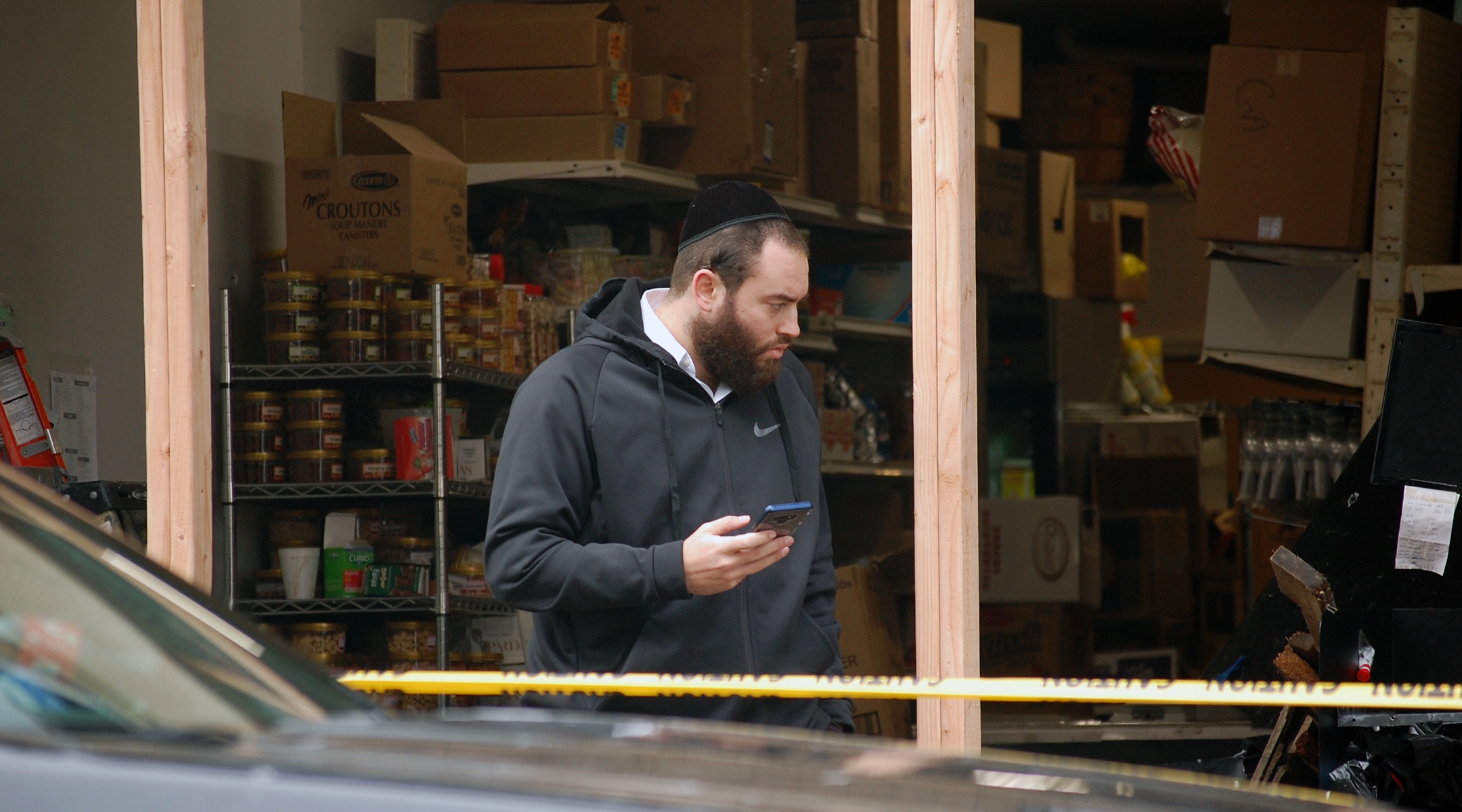 A Hasidic man stands in front of JC Kosher Supermarket in Jersey City, N.J., the site of a shooting that left three dead along with the two shooters, Dec. 11, 2019. Police are still investigating whether it was a hate crime. (Laura E. Adkins/JTA News)
Advertisement

JERSEY CITY, N.J. (JTA) — Every Friday afternoon, Leah Mindel Ferencz would cook hot kugel and cholent and serve them in the small grocery store she and her husband, Moshe, opened here about four years ago.

The couple had moved from Brooklyn, and the store they opened, JC Kosher Supermarket, became a cornerstone of the small but growing Jewish community of Greenville, a largely African-American neighborhood in this city across the Hudson River from Manhattan. The sole kosher grocery for the 100 or so Orthodox families here, the store signaled that the community was there to stay, hopefully for years to come.

Then on Tuesday, Ferencz was gunned down in the store, along with an employee and a customer. Ferencz was 32 and a mother of five.

“She was someone that we saw often, always a cheerful demeanor, always a smile on her face, really relaxed, very calm, very patient, just a nice person,” said Rabbi Shmully Levitin, a neighborhood resident and Chabad rabbi serving the city. “It’s a risk and it takes courage to move out [of Brooklyn]. They didn’t just move out themselves, they actually built a business knowing and hoping the community would grow and the community needed this.”

The incident started with the fatal shooting of a police officer at a cemetery before the two assailants, a man and a woman who were suspects in a homicide, holed up in the market, engaging police in a lengthy gun battle.

Now the Jewish community of Jersey City, and their friends and family in New York, are reeling and wondering what comes next.

Many had moved from Brooklyn to escape the borough’s high prices and had found a welcoming new home. It wasn’t a danger zone, they said. They got along with their neighbors and did not experience the anti-Semitic vandalism, harassment and assaults that have taken place recently in Brooklyn’s Hasidic neighborhoods.

“There have never been any attacks or incidents with the Jews who lived there,” said Rabbi Avi Schnall, the New Jersey director for Agudath Israel of America, an Orthodox organization. Schnall has worked with Jews and other local leaders in Greenville on building bridges with the neighborhood’s communities.

Schnall drew a link between Tuesday’s shooting and the killings at synagogues in Poway, California, in April, and in Pittsburgh a little more than a year ago.

“It’s beyond tragic,” Schnall said. “It’s frightening. What’s more frightening is this is not a local issue. This is taking place in three places throughout the country in the past year, that people are being gunned down.”

Officials say it remains unclear whether the attack was motivated by anti-Semitism. Jersey City Mayor Steven Fulop tweeted Wednesday morning that “it has now become clear from the cameras that these two individuals targeted the Kosher grocery location.” But officials at a news conference later in the day repeatedly stressed that they could not definitively say what motivated the shooters.

“We know there is significant speculation about the shooters’ motive,” said New Jersey Attorney General Gubrir Grewal. “We are not in the position at this time to say definitively why the suspect decided to stop in front of the supermarket and begin firing immediately.”

Less than a day after the shooting, JC Kosher is already rebuilding.

On Wednesday, a plywood frame stood in front of the store entrance near a truck carrying what looked like drywall. Men from a company called Gold Star Restoration were hammering away. Inside, boxes of children’s candy, cereal and croutons lined the shelves. A group of Orthodox men were carrying a shiny new door to the building. Construction paused only for a prayer service at the adjacent synagogue, K’hal Adas Greenville, with New Jersey Gov. Chris Murphy in attendance.

The grocery store is on Martin Luther King Drive, one of the neighborhood’s central thoroughfares. Down the street is a Pentecostal church, a mosque and a string of businesses. The surrounding blocks are full of row houses in a rainbow of colors along with some empty lots. Broken bottles and litter line the streets.

Jersey City residents say the area has been gentrifying, with a boom in new construction in the past few years. Douglas Harmon, 43, a lifetime Greenville resident and local building contractor, said most of the new arrivals are Jewish families.

Harmon said that he and other locals have had a good relationship with their new neighbors, though gentrification has increased tensions in the area.

In a video circulated Wednesday in Hasidic group text messages, Harmon offered to help clean out the store for free and offered his best wishes to the Jewish community.

“The people walking past every day, they don’t have any problem [with the Jewish community],” Harmon told the Jewish Telegraphic Agency. “As long as you’re a good person, good people are respected wherever they go.”

He added, “That never should have happened to the Jewish people yesterday, or the cops.”

Religious leaders in Greenville already have been working together to assuage the tensions that often accompany gentrification, Jersey City Council President Rolando Lavarro told JTA. Lavarro said the city had allowed residents to put “No Knock” signs on their doors to deter real estate developers and said that security could be increased in the area pending the result of the police investigation. He said he did not know if the shooting was at all related to issues in the neighborhood.

“I think we can do better to be a welcoming city,” Lavarro said. “I think we can do a better job of balancing preserving the culture, heritage and values of those who have been in the city in longtime residence, and balancing the needs of communities that are newer to Jersey City.”

Yosef Rapaport, a Hasidic activist in the Borough Park neighborhood of Brooklyn, said the new arrivals in Jersey City have been driven by rising prices that have made homes harder to afford in Brooklyn.

“There has been a tremendous outflow from Brooklyn of young people,” he said. “Synagogues don’t have young children anymore. Nobody can afford to live here.”

Schnall feared that, despite the largely tranquil feeling in Greenville before Tuesday, this is is simply the new reality: Jewish communities across the country are at risk.

“It’s concerning that this took place,” he said. “But things like this can happen anywhere.”