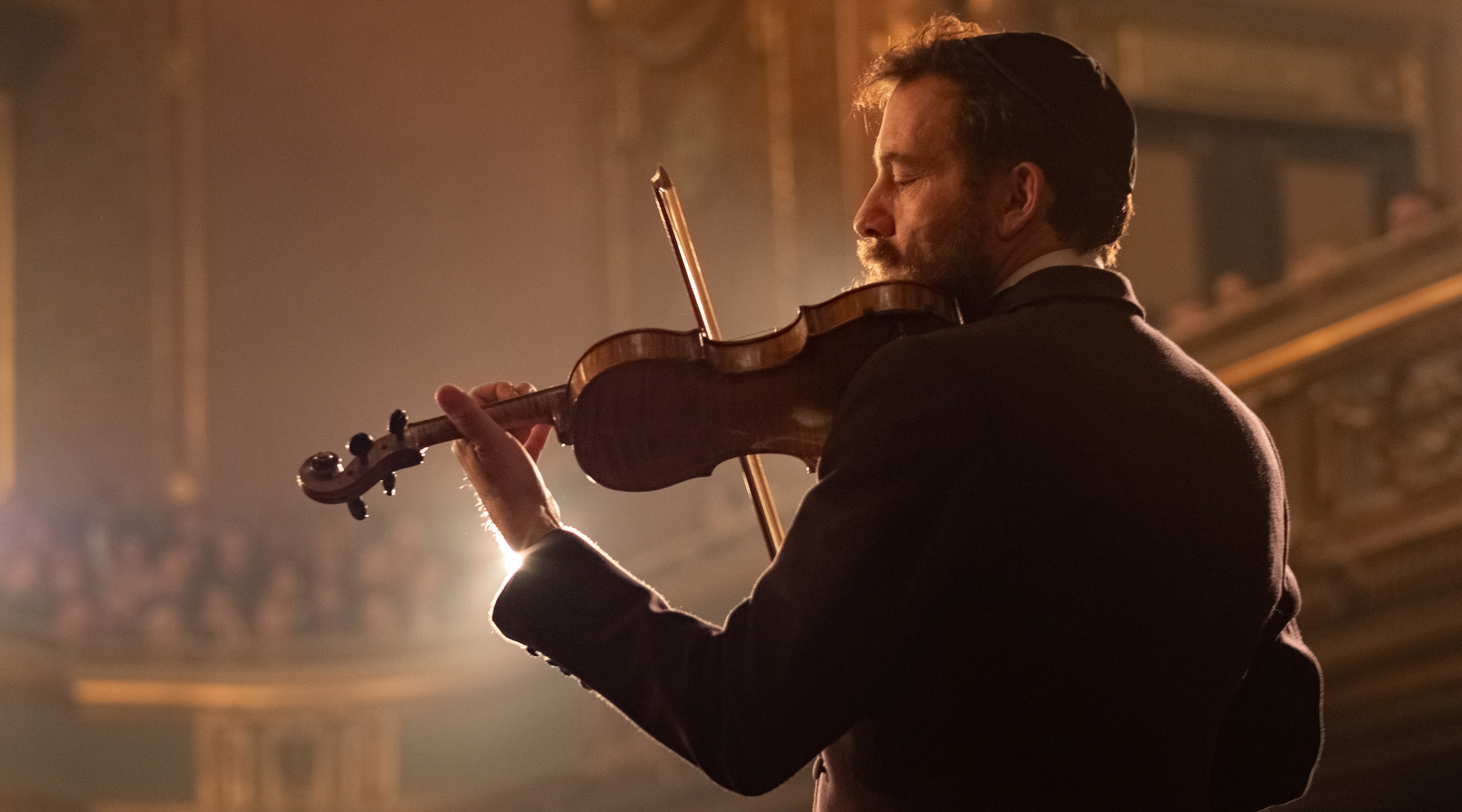 Clive Owen excels in the complex role of a man torn between his talent and the need to remember. (Sabrina Lantos/Sony Pictures Classics)
Advertisement

(JTA) — “The Song of Names” is a heartwarming film about a Jewish violin virtuoso who renounces his faith in the aftermath of the Holocaust, only to rediscover it when he hears a song of remembrance.

The violinist, Dovidl Rapaport, is shown in three stages of his life, the last as a Hasid played by Clive Owen. The Golden Globe and Emmy-winning actor and Academy Award nominee said he was more than a little surprised to be offered the role.

“Why me?” he chuckled in a telephone interview with the Jewish Telegraphic Agency.

Director Francois Girard approached Owen with the script, which Owen loved. But why cast a grizzled English actor as a Hasidic Jew?

“He told me I was the right guy,” Owen said.

Girard was correct. Owen excels in the complex role of a man torn between his talent and the need to remember.

Dovidl is a young boy when his father brings him from Poland to prewar London to audition for music impresario Gilbert Simmonds, played by Stanley Townsend. Simmonds is so impressed with Dovidl’s performance that he offers to board the youngster, allowing him access to top instructors and saving him from the impending danger being posed by the Nazis to his homeland.

In the Norman Lebrecht novel on which the film is based, Simmonds is Jewish. But he’s not Jewish in the film, rendering the sacrifices he makes on Dovidl’s behalf even greater. Simmonds makes the home kosher and pays for the child’s Jewish education and bar mitzvah. This all creates tension with Gilbert’s son Martin — a tension made worse some years later when Dovidl disappears.

In 1951, Gilbert arranges a major debut concert for Dovidl. But the violinist doesn’t show up. Simmonds is financially ruined and dies several months later. Only years later does Martin find clues suggesting that Dovidl is still alive, and he follows them in what becomes an engaging globetrotting mystery.

We learn later that en route to the concert, Dovidl has an epiphany. By chance, he stops off at a synagogue whose congregants are survivors of Treblinka, the camp where his family had been sent. The congregants had vowed to remember the names of those who did not make it. As the rabbi puts it, “These names are committed to memory through a song.” 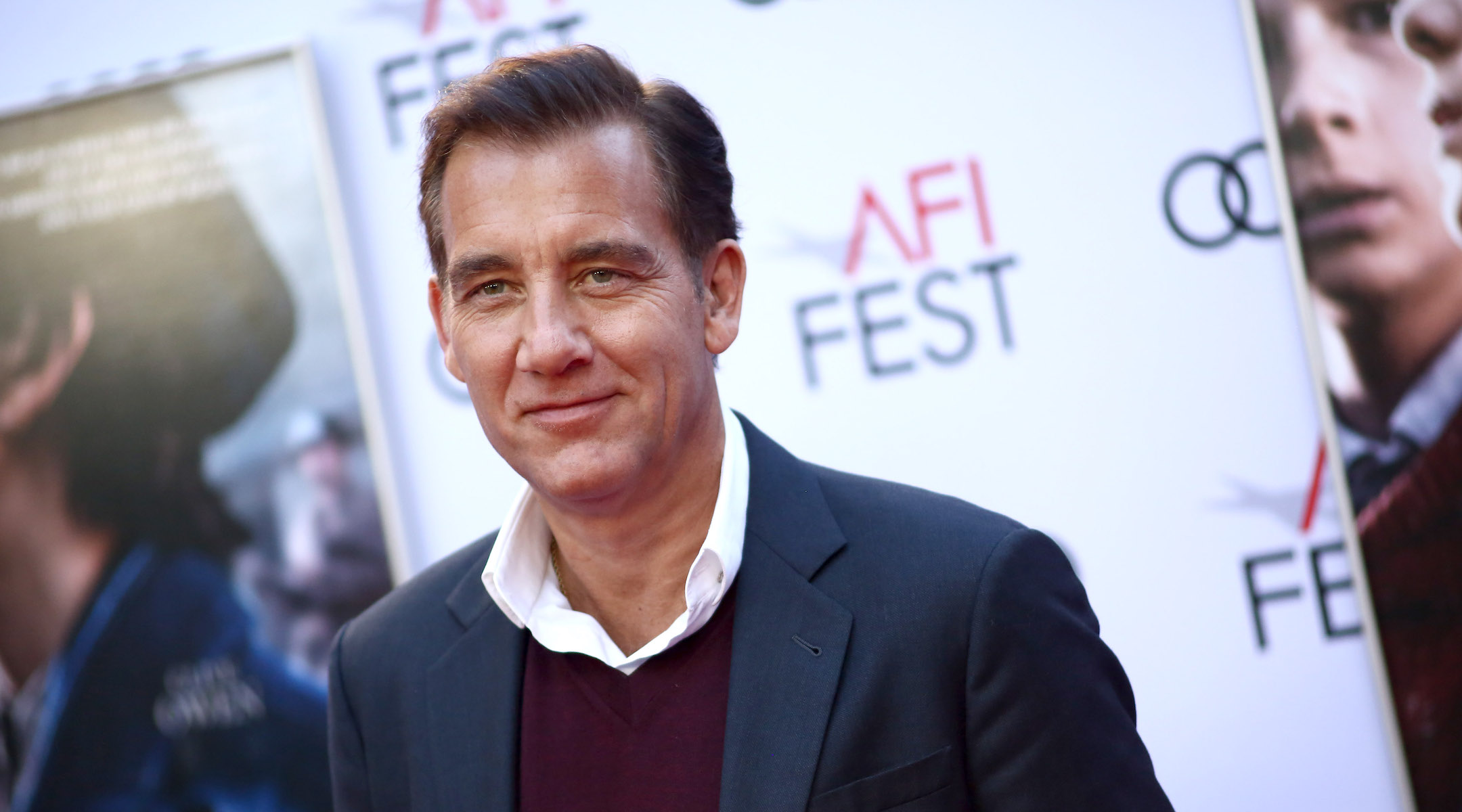 Sitting in the synagogue, Dovidl hears the names of his family members and realizes all hope is gone. The concert suddenly seems unimportant.

Owen says he never had an epiphany quite like that, but “fell in love with acting at an early age, after I did a school play.”

“And I said that’s what I wanted to do, even though no one took me seriously,” he said.

Appearing in “The Song of Names” had a similar impact on him.

“It is so powerful and touching a movie, and of course that’s why I did the film,” Owen said. “It’s message of remembrance impacted me from the moment I read the script.”

Born in a small village in central England, Owen had no exposure to Judaism as a young person. No Jewish families lived nearby, and there weren’t many in his school. Anti-Semitism, he says, was something he had no experience with.

“I think it’s shocking that it’s on the rise,” Owen said. “That’s why a movie like this is so important.”

It’s also why he took particular care to be sure his acting was correct in every detail. Jonah Howard-King, who plays Dovidl from ages 17 to 23, is Jewish, and Owen met with Howard-King’s rabbi to discuss aspects of the script.

He also did additional research — not only to get the religious details correct, but the look, the clothing, the gestures.

“I was concerned that the look was right, that it was grounded,” Owen said. “I did not want it to be just Clive Owen in a black suit. This last section of the movie is the emotional arc of the story and it was hugely important as such.”

At a time of ongoing controversy over whether it is appropriate for actors to portray characters of different races and gender identities, Owen says he had no concern about portraying a Jew onscreen.

“I was so taken by the story that when someone asked me if it was appropriate for me to play the role, I was a little shocked,” Owen said. “It never occurred to me. But that’s why it became more important for me to do it right, to have it as authentic as possible.”

“The Song of Names” opens in limited markets on Christmas Day.