Inside the biggest American Shabbat service of the year 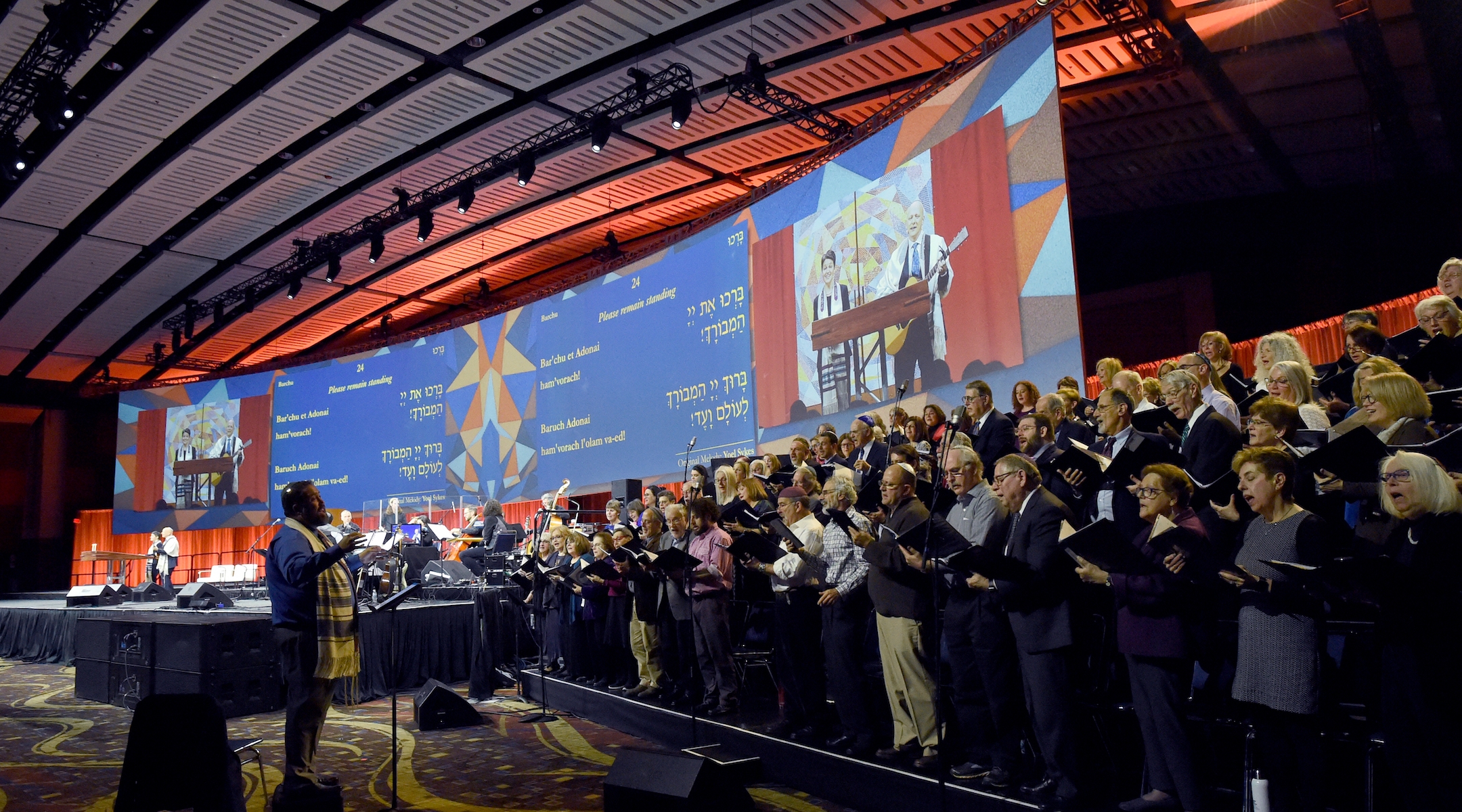 CHICAGO (JTA) — Josh Nelson sat onstage in front of 5,000 people, accompanied by eight other musicians and perched next to a ginormous video screen bearing the words to one of Judaism’s central prayers, the Shema.

It was the largest Shabbat service in America and the apex of the Reform Jewish movement’s biennial conference, which ended here on Sunday morning. The service had a vibe that was half Jewish rock concert, half revival tent. Thousands of worshippers sat in cushioned chairs while Nelson’s band led the service accompanied by a rabbi, cantor, 78-person choir and a couple of others.

From the rear seats of McCormick Place, the largest convention center in North America, they looked like stick figures. Almost everyone kept their eyes glued to the video screens, which alternated between closeups of the clergy and the text of the prayers they were reciting. No prayer books required.

The service featured high production values and moving liturgical texts while spanning an array of musical genres. But the day before, Nelson, the biennial’s artistic director, still wasn’t sure how to handle the pronunciation of the Shema’s second line. The first four words are “Baruch shem k’vod malchooto.” It was that fourth word, and its three syllables, that bedeviled Nelson.

“Is it ‘mal-CHOO-toe‘ or ‘mal-choo-TOE?'” he asked at a rehearsal on Thursday morning.

Nelson sat behind a keyboard with an acoustic guitar slung across his lap in the bland conference room that served as the band’s practice space. Seated around him in a circle were another keyboardist, a guy fiddling with an amp, a cantor, a rabbi, a violinist, a cellist, a drummer and another guitarist. 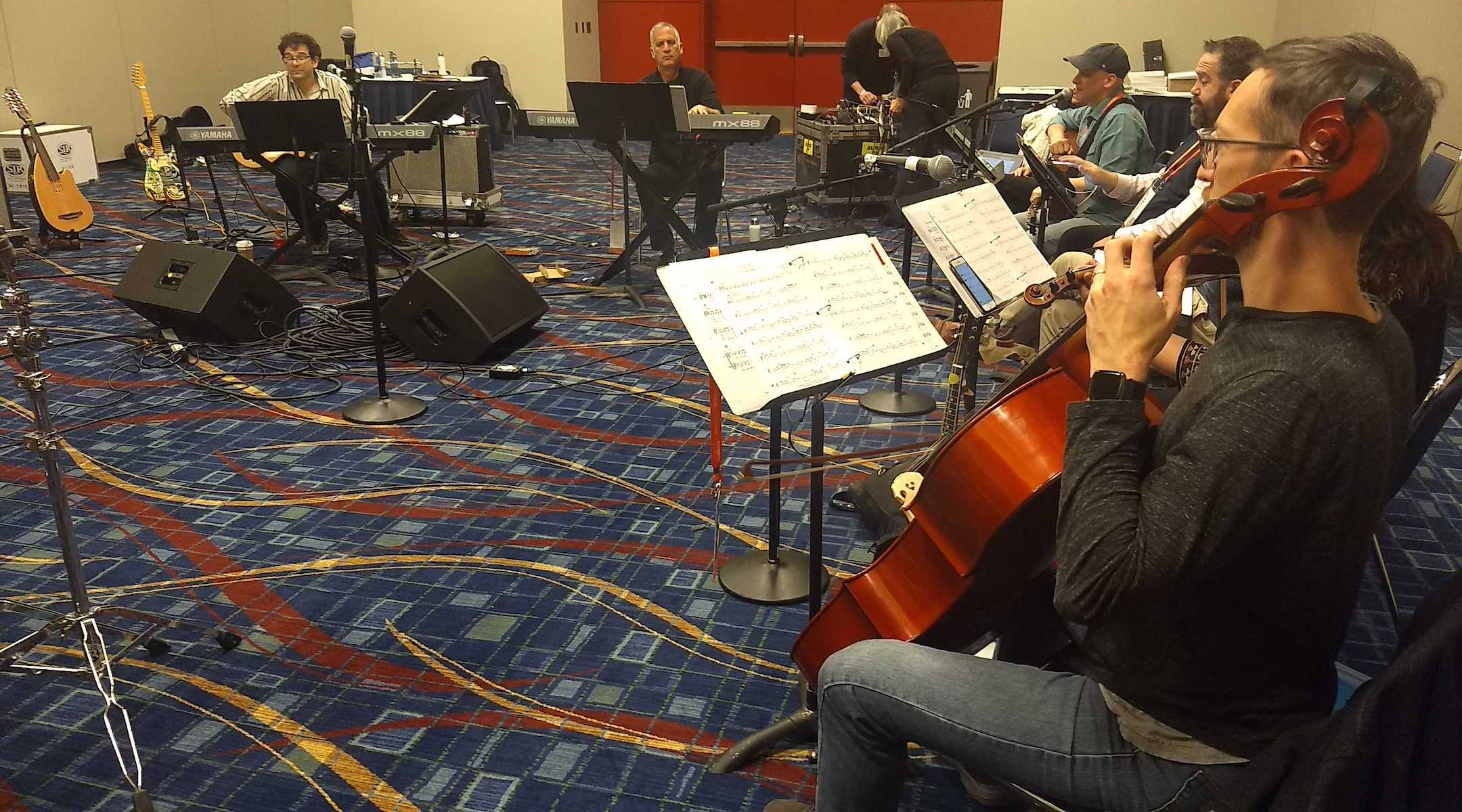 This was their second 2 1/2-hour session in as many days. Later in the same session they debated which salads to order for lunch. Now they were arguing over a word that is usually whispered silently. According to standard Israeli pronunciation, the last syllable is stressed. But Cantor Rosalie Will, the Union for Reform Judaism’s worship and music director, did not expect the 5,000 worshippers to adhere to Hebrew grammar.

“I think more of the Jews go ‘mal-CHOO-toe,'” she said. “Even if that makes all of us cringe.”

At that point, a cacophony of suggestions erupted as band members sang the two pronunciations at each other, always perfectly in tune, as if competing over which sounded better. What was more important? Being technically correct or saying the word the way most of the room would?

“Do what the bad Jews do,” someone said in jest. That settled it.

On Friday night, Cantor Daniel Mutlu said “mal-CHOO-toe.” And 5,000 worshippers sang along without skipping a beat.

The URJ Biennial, one of the largest Jewish religious conferences in the United States, is much like other mass Jewish gatherings. There were sessions on Torah study, social justice, politics, Israel. At any given moment, hundreds of Jewish baby boomers wearing lanyards stood around schmoozing. There was swag. There were boxed lunches. There was plenty of coffee, yet somehow never enough.

But Friday night was different, the confluence of two unique aspects of Reform Judaism. First, many Reform congregations treat Friday night as their main prayer service. And second, Reform Judaism places no limits on musical instruments or the use of electricity on Shabbat.

For most Conservative and Orthodox Jews, the opposite is true. Saturday morning is typically the main service, and musical instruments and video are either discouraged or verboten. But at the biennial, Friday night is the main event. And Nelson and his band could do nearly whatever they wanted to enhance it.

“I think that music is a really broad point of access to people, and people respond differently to different styles,” said Nelson, the biennial’s artistic director. “So the more points of access we can create musically for people, the more likely they are to have a spiritual experience that’s meaningful to them. There’s no one right answer.” 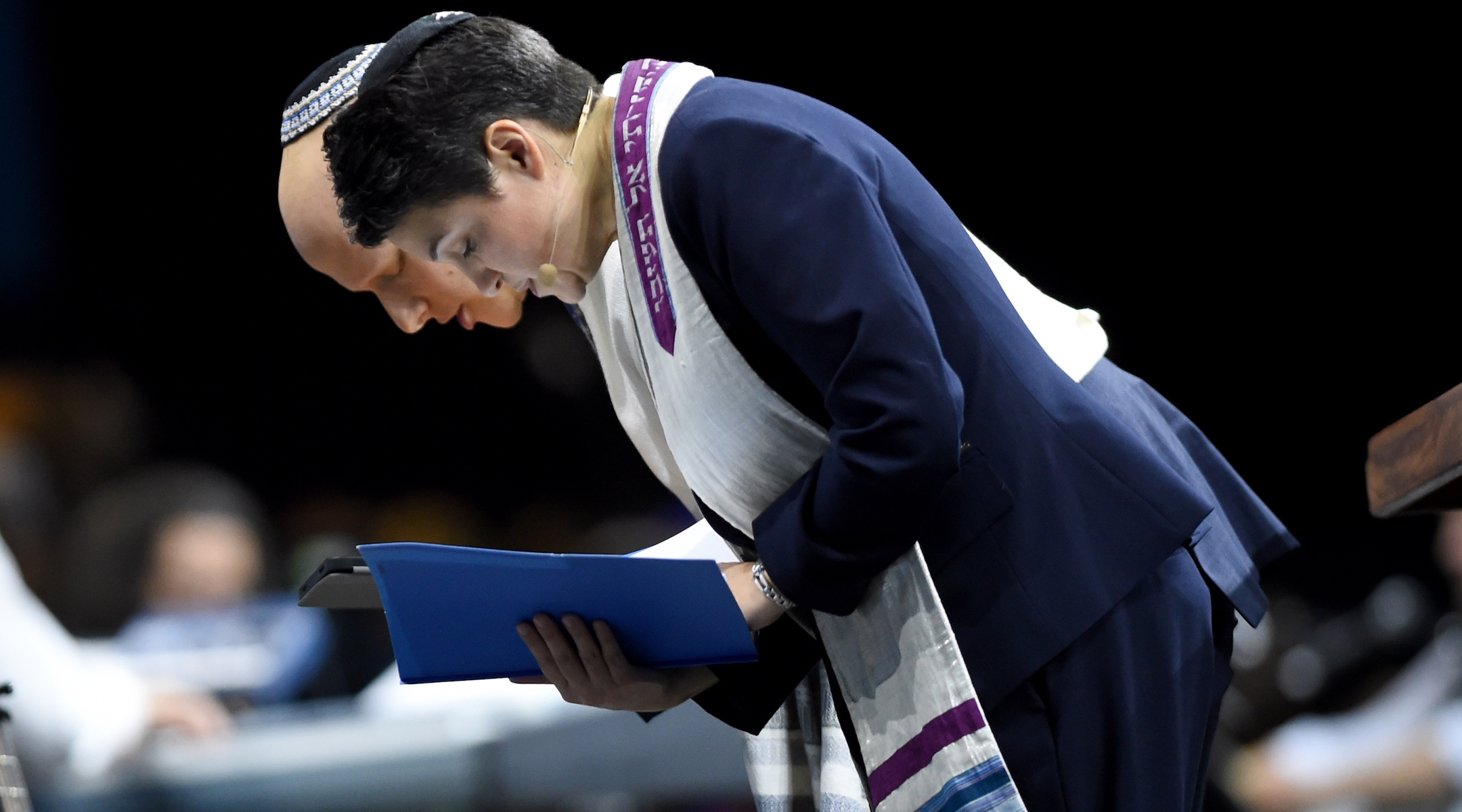 What emerged was an experimental service with a range of styles and moods modeled after the inclusivity that the Reform movement strives for. In addition to prayers, the video feed displayed poems, pictures, related biblical verses and crowdsourced responses to questions like “What gives us strength?” At one point, the service moved from a folk tune composed by a Reform singer to a Moroccan Jewish melody to a spoken interlude about resisting labels and definitions.

“We are many identities and loves, many genders and none,” said Rabbi Jill Maderer, one of the service leaders. “We are in between roles, at the intersection of histories, or between place and place.”

The service included plenty of traditional elements, too, and its overall structure wasn’t all that different from an Orthodox Friday night service, though the prayers were shorter. Both Nelson and Will said they chose some well-known Jewish melodies to give worshippers a sense of familiarity.

“People will be like, sigh,” Will said, exhaling deeply. “After something that was sort of new, here’s a [melody] where it’s like, oh my God, it’s beaten to death, but we know that that’s a moment everyone is going to just sing it.”

The Friday night service was just one of several ways the conference tried to push the boundaries of prayer. That morning, attendees could choose between a yoga-centered worship and a service with Israeli leaders. The day before, a few dozen people went to a service centered around electronic dance music. Some people laconically waved their hands in the air. A couple others sat cross-legged on the floor with their eyes closed.

“I as a pray-er want to feel different things,” Will said. “Sometimes I might want to feel small, sometimes I want to be in unison with my ‘chevra’ [social group].” 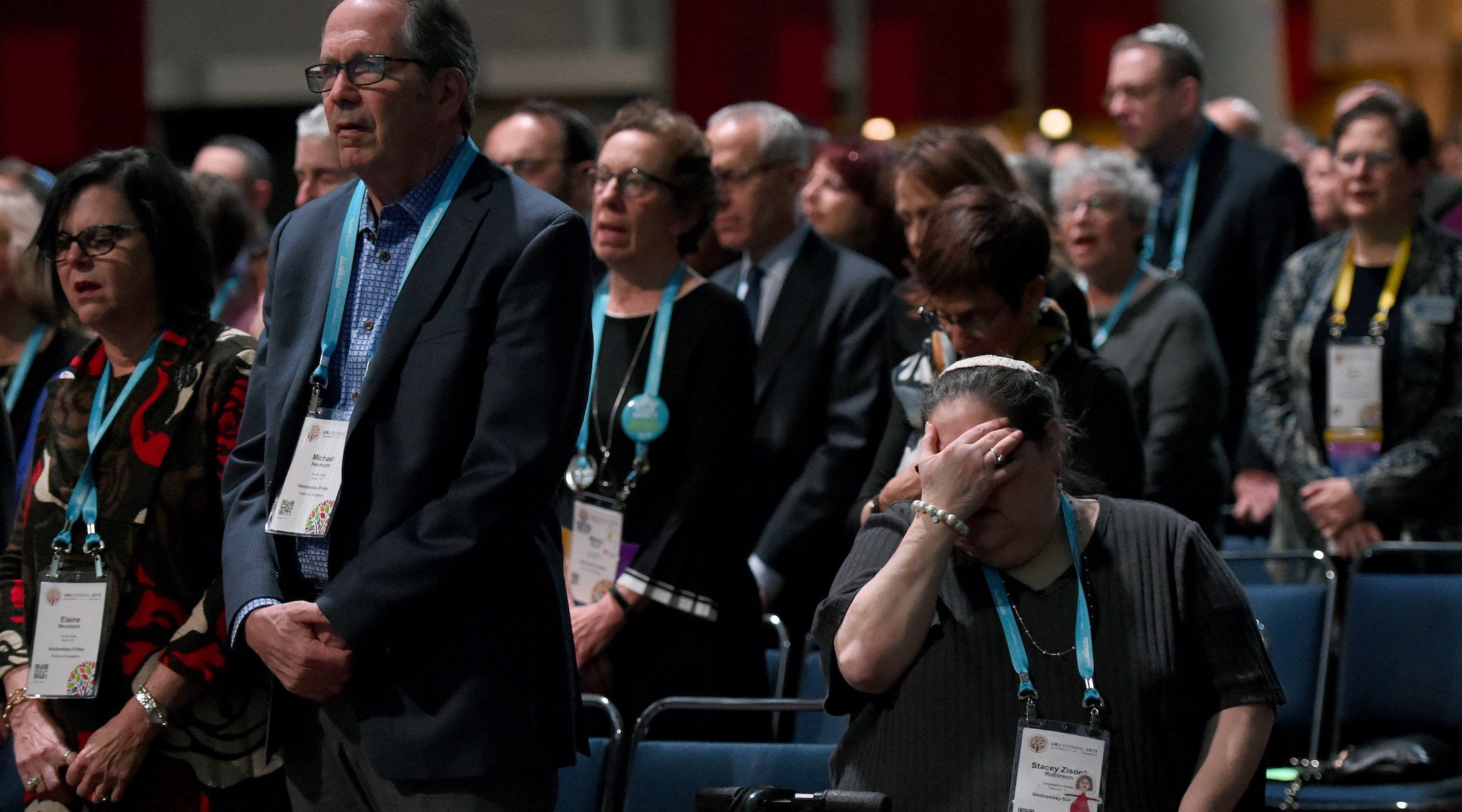 Some of the 5,000 worshippers join in the Friday night service. (Rob Dicker/Union for Reform Judaism)

One challenge of designing the Friday night service, both Nelson and Will said, was transitioning from the concert-like mood to one of silent, personal prayer. During the practice session on Thursday, they told the musicians on a couple of occasions to slow down, draw out a melody a little longer.

The mega-sized service was appropriate for the vast, pillared atrium where it was held. But if only for a few moments, they hoped it could feel intimate, too. And to make that happen, they knew they had to pronounce every word of the Shema the right way.

“When the congregation sings Shema for the first time, it’s the single most powerful moment they have while they’re here,” Nelson said. “If I’m creating that moment and facilitating that moment, I’m going to approach that with the sense of giving them the space to feel that together.”