In Amsterdam, the world’s priciest menorah gets a new life 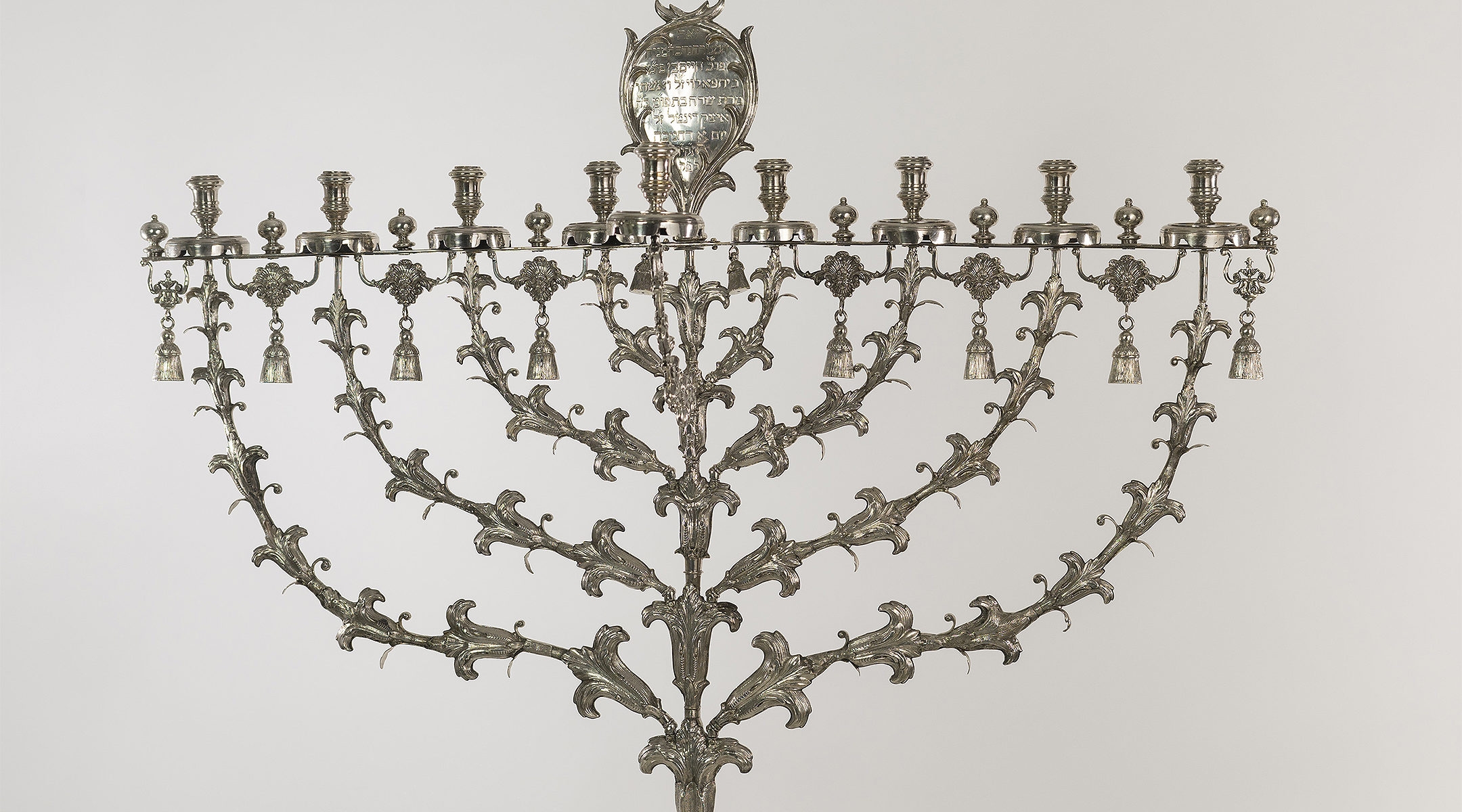 The Rintel Menorah on display at the Jewish Historical Museum of Amsterdam, the Netherlands. (Courtesy of the Jewish Cultural Quarter/JCK)
Advertisement

AMSTERDAM (JTA) — For the Amsterdam Jewish Historical Museum, Hanukkah this year entailed the stressful chore of assembling the world’s most expensive menorah.

Last week, the Rintel Menorah, a 266-year-old menorah valued at over a half-million dollars, was put back on display at Amsterdam’s Jewish Historical Museum following the restoration of its wooden base, which was lost during the Holocaust. Built in 1753, the menorah is a relic from the golden age of a community that was nearly annihilated by the Nazis.

The restoration entailed the installation of a 3-foot wooden base created by the Judaica designer Piet Cohen. Before that, the Rintel stood on a rectangular marble slab that did little to complement the menorah’s intricate design, which includes eight bells and more than 150 delicate reliefs resembling flowers, leaves and thorns.

The massive base had also complicated the annual transport of the menorah from the museum to the Rabbi Aron Schuster Synagogue, where the community would use it to light Hanukkah candles. Moving the menorah, a ritual that began in 1955 and was discontinued only in 2010, required a driver, three movers and a curator, who would dismantle the Rintel and pack its five parts into wooden boxes. The menorah would then stay at the synagogue, where it was somewhat vulnerable to theft, for a little over a week before the procedure would be repeated in reverse. 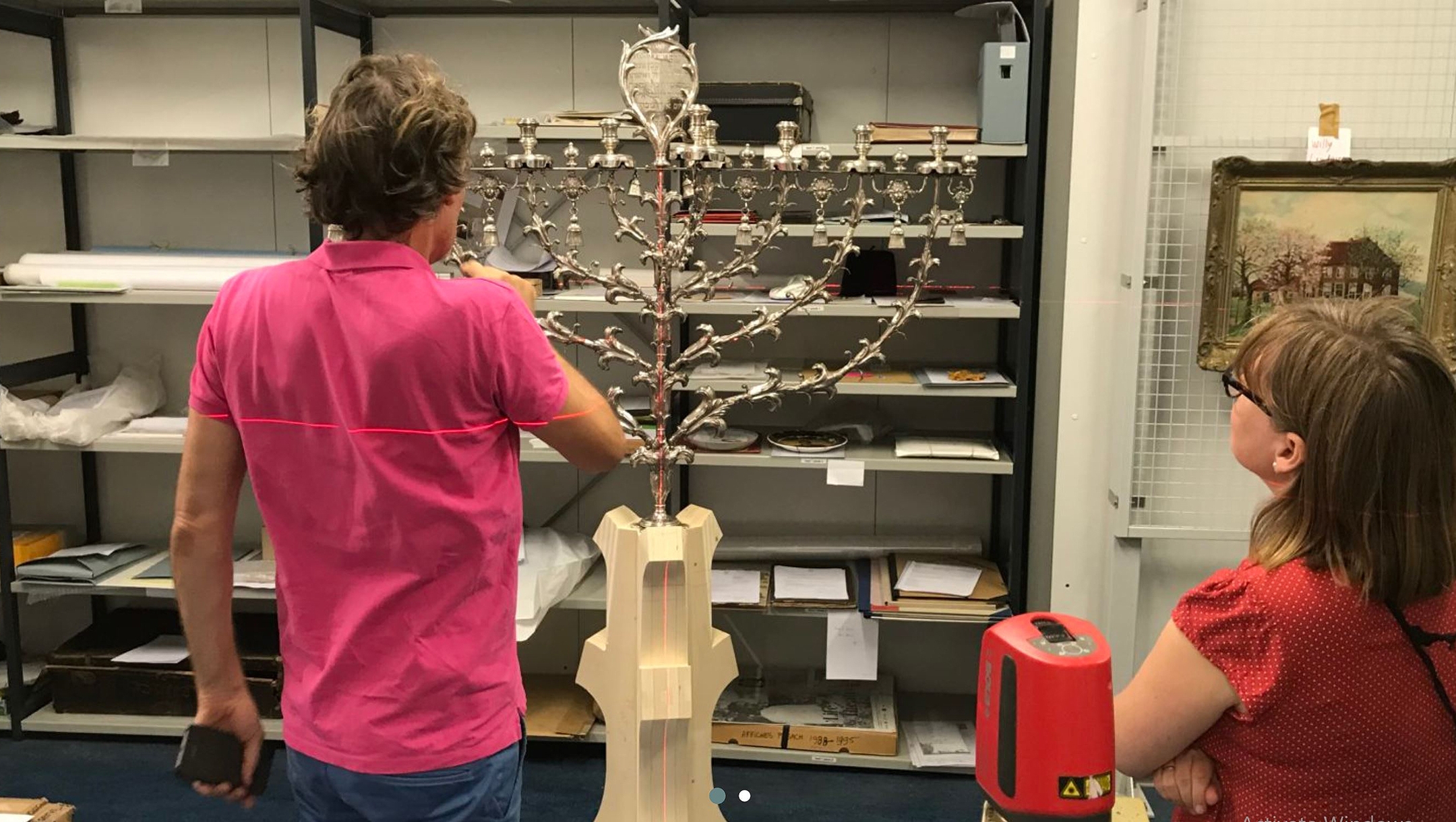 Restoration work and measurements being done on the Rintel Menorah in Amsterdam, the Netherlands in 2019. (Courtesy of Cambium Meubels)

In 2016, the Rintel was appraised at $563,000. The price tag easily topped the list of the world’s most expensive Hanukkah menorahs that Israel’s Beit Hatfutsot Museum of the Jewish People had compiled shortly before.

The runners up were also Dutch: Twin menorahs, both much smaller and less ornate than the Rintel. One of the twins fetched $441,000 at an auction in 2016. The other is owned by the Dutch royal family and is on permanent loan to the Jewish museum.

The other menorahs have their charms, but the lighting of the Rintel “was a statement that said, ‘We’re still here,'” Ruben Vis, the chairman of the Organization of Jewish Communities in the Netherlands, or NIK, told the Jewish Telegraphic Agency.

The menorah was commissioned by philanthropist Sara Rintel from Pieter Robol II, a master silversmith, and donated it to the Great Synagogue of Amsterdam. Prior to that, Amsterdam’s Ashkenazi Jews had none of the flashy artifacts characteristic of the city’s older and more prosperous Portuguese communities, Vis noted.

“It was an attempt to match the Portuguese community’s splendor, and it marked a certain peak moment in Dutch Jewry’s history,” he said.

The Great Synagogue is among dozens of Jewish houses of worship in the Netherlands that did not survive World War II. Closed down in 1943 by the Germans, its furniture and marble were looted. Nearly all of its members were among the 75 percent of Dutch Jews killed by the Nazis, the highest death rate of any Nazi-occupied country in Western Europe. Some 40,000 Jews live in the Netherlands today, down from a prewar population of 140,000. The hall of the former synagogue is now part of the Jewish Historical Museum.

Who exactly hid the Rintel during the war is unknown, but the disappearance of the wooden base suggests it may have been kept flat and concealed inside a piece of furniture. 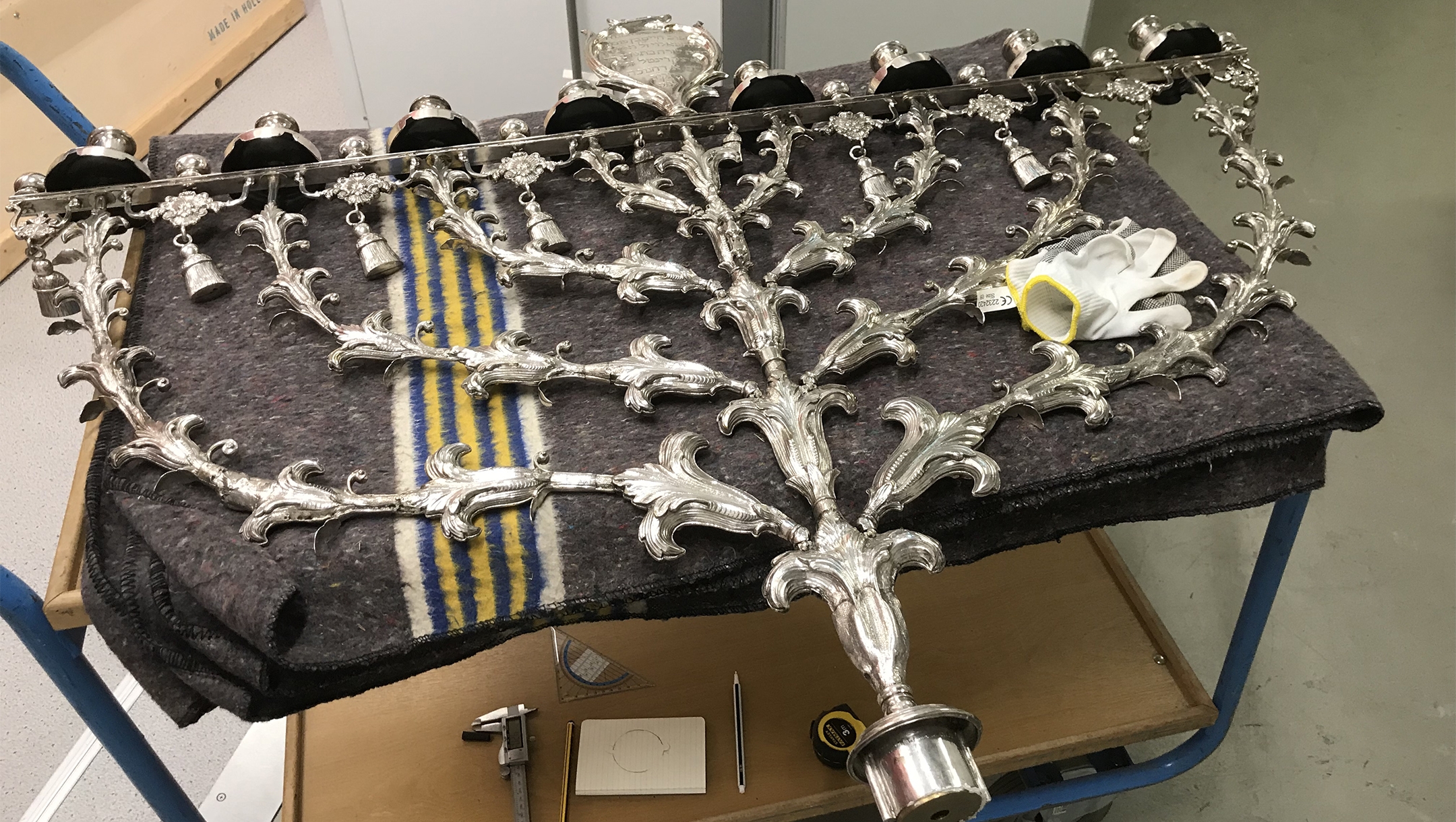 Restoration work being done on the Rintel Menorah in Amsterdam, the Netherlands in 2019. (Courtesy of Cambium Meubels)

The menorah is considered such a powerful symbol of Dutch Jewry that, in 1898, a replica was made for the Dritt Synagogue, another Ashkenazi house of worship that did not survive the war. The replica also survived the war and had for years been used for lighting candles at an annual Hanukkah concert at the Concert Gebouw, Amsterdam’s best-known concert hall.

In 2015, facing growing assimilation and rising security expenses, the Jewish Community of Amsterdam informed the Dutch government that it intended to auction off the original Rintel.

The community needed the government’s authorization for the sale because the Rintel was listed as a cultural heritage asset. But instead of approving the sale, the government, together with the Jewish Cultural Quarter and the Jewish Historical Museum, arranged to purchase the menorah and offer it on permanent loan to the museum.

According to Emile Schrijver, the director general of the Jewish Cultural Quarter, the umbrella group for five Jewish institutions located in the heart of what was once Amsterdam’s most heavily Jewish neighborhood, the Dutch government provided half of the $563,000. Another $125,000 came from the Rembrandt Association, a Dutch organization that helps raise money for the preservation of significant artworks. The rest came from various other donors. The sale was completed in 2016.

The scheme ensured the Rintel remained in the Netherlands, but the change in ownership also meant its permanent retirement. With its changed status from a ritual item used by a living Jewish community into the prized possession of a major museum — with all the preservation-related restrictions that come with it — the menorah could no longer be used for the annual Hanukkah candle lighting.

Vis said his community has come to terms with the Rintel’s retirement.

“Objects have a certain lifespan – something we understand all too well in our current society, with its throw-away culture,” he said. “The Rintel has just reached its usability limit. And it became something else: A work of art. A jewel.”