In Holland, one of the world’s most expensive Hanukkah menorahs hides in plain sight 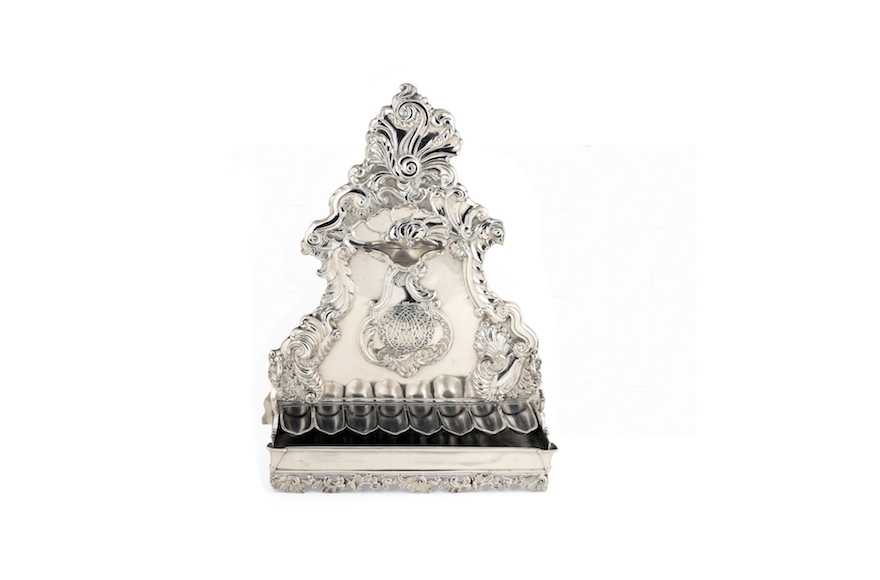 AMSTERDAM (JTA) — Nothing about the appearance of object MB02280 at this city’s Jewish Historical Museum suggests it is the capital’s priciest Hanukkah menorah, worth more than the average local price of a duplex home.

Shaped like the body of a violin, it is only 16 inches tall. Its base cradles eight detachable oil cups intended to function as candles on Hanukkah, when Jews light candles to commemorate a 167 BCE revolt against the Greeks. They are set against the menorah’s smooth, reflective surface, whose edges boast elaborate rococo reliefs.

But for all its charms, the Nieuwenhuys menorah — its creator was the non-Jewish silversmith Harmanus Nieuwenhuys — doesn’t stand out from the other menorahs on display next to it at the museum. Far from the oldest one there, the menorah certainly doesn’t look like it’s worth its estimated price of $450,000.

The Nieuwenhuys menorah can hide in plain sight because its worth owes “more to its story than to its physical characteristics,” said Irene Faber, the museum’s collections curator.

Made in 1751 for an unidentified Jewish patron, the Nieuwenhuys menorah’s story encapsulates the checkered history of Dutch Jewry. And it is tied to the country’s royal family, as well as a Jewish war hero who gave his life for his country and his name to one of its most cherished tourist attractions.

The price tag of the Nieuwenhuys menorah, which does not have an official name, is roughly known because a very similar menorah made by the same silversmith fetched an unprecedented $441,000 at a 2016 auction. A collector who remained anonymous clinched it at the end of an unexpected bidding war that made international news. It was initially expected to fetch no more than $15,000.

Another reason for the more vigorous bidding: The menorah came from the collection of the Maduros, a well-known Portuguese Jewish family that produced one of Holland’s most celebrated war heroes. The Nazis murdered George Maduro at the Dachau concentration camp after they caught him smuggling downed British pilots back home. In 1952, his parents built in his memory one of Holland’s must-see tourist attractions: the Madurodam, a miniature city.

“I imagine the connection to the Maduro family drove up the price,” said Nathan Bouscher, the director of the Corinphila Auctions house south of Amsterdam, which has handled items connected with famous Dutch Jews.

Besides the menorah on display at the Jewish Historical Museum, the Netherlands has another very expensive one in the Rintel Menorah: A 4-footer that the Jewish Historical Museum bought last year for a whopping $563,000. Far more ostentatious than the modest-looking Nieuwenhuys menorah, the Rintel, from 1753, is made of pure silver and weighs several kilograms. It is currently on loan to the Kroller-Muller Museum 50 miles east of Amsterdam.

The Jewish Historical Museum has no intention of selling the Nieuwenhuys, Faber said, although it could attract even more spectacular bids owing to its provenance: It was bought by the late queen of the Netherlands, Wilhelmina, as a gift for her mother and given to the museum by her great-grandson, King Willem-Alexander.

“We don’t know who commissioned the work, but from the reputation of the artist and the amount of labor it took, it was probably a wealthy Jewish family, perhaps of Sephardic descent,” Faber told JTA last week at the museum.

At the center of the object is a round network of arabesque-like decorations “that probably contains the owner’s initials in a monogram,” Faber said, “but we haven’t been able to decipher it. It’s a riddle.”

The monogram was one of several techniques that Nieuwenhuys and other Christian silversmiths in the Netherlands had developed for their rich Jewish clients.

Before the 19th century, no Jews were allowed to smith silver in the Netherlands because they were excluded from the Dutch silversmiths guilds, which were abolished in the 1800s.

“This exclusion was beneficial [to the guild] because it kept out competition, but it meant that Christian smiths needed to become experts at making Jewish religious artifacts like this menorah,” Faber said.

Works like the menorah on display at the museum illustrate how some Jewish customers clearly were art lovers with sophisticated tastes.

Whereas the Maduro menorah was symmetrical with Baroque highlights, the Nieuwenhuys is asymmetrical with rococo characteristics that were “pretty avant-garde for its time,” Faber said. The smooth surfaces are “another bold choice, showing finesse,” she added.

Whoever owned the menorah no longer possessed it by 1907, when Queen Wilhelmina bought it for an unknown price at an auction to give it as a gift to her mother, Princess Emma.

This purchase may appear inconsequential to a contemporary observer, but its significance becomes evident when examined against the backdrop of institutionalized anti-Semitism among other European royal houses and governments.

The German Emperor Wilhelm II, a contemporary of Wilhelmina, was a passionate anti-Semite who famously said in 1925 that “Jews and mosquitoes are a nuisance that humankind must get rid of some way or another,” adding “I believe the best way is Gas.”

Belgium’s King Leopold III was more politically correct, stating magnanimously in 1942 that he has “no personal animosity” toward Jews, but declaring them nonetheless “a danger” to his country. He raised no objections when the Germans and their collaborators began deporting Belgian Jews to their deaths. 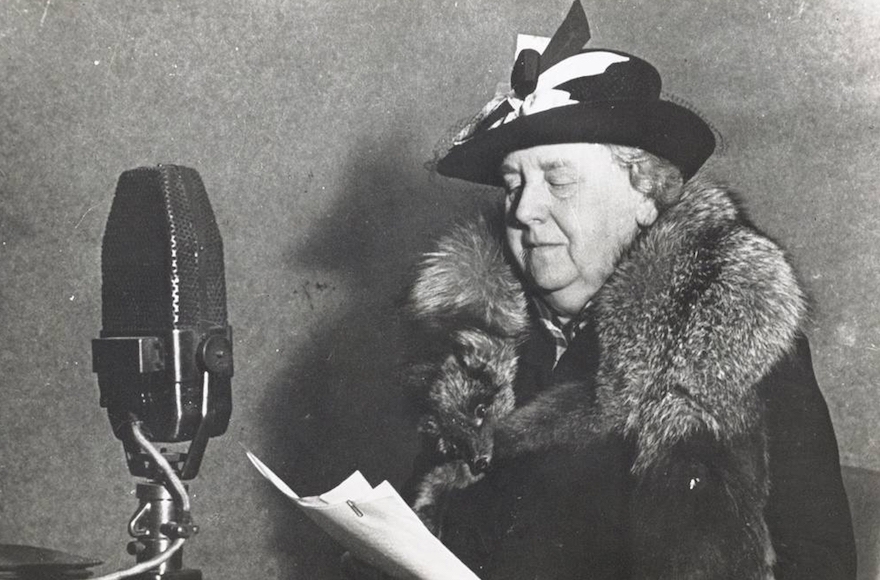 But in the Netherlands, where thousands of Jews found haven after fleeing the Spanish and Portuguese Inquisition of the 16th century, royals not only refrained from such statements but were genuinely “interested in other faiths, including the Jewish one,” Faber said.

Wilhelmina’s gifting of a menorah to her mother “isn’t strange for her,” Faber said. “I imagine she found it fun, something to talk about with her mother, to see together how it works.” After all, “Jews have always been under the protection of the Royal House.”

Except, that is, during the years 1940-45, when Queen Wilhelmina and the Royal House fled to the United Kingdom. Wilhelmina mentioned the suffering of her Jewish subjects only three times in her radio speeches to the Dutch people during five years of exile.

Whereas before the war “Jews always sought the Royal House,” during and after “it appeared Wilhelmina didn’t think too much about the Jews,” Faber said. This was “a stain” on relations between Dutch Jews and the Royal House, which underwent a “rupture.”

But this was gradually healed in the postwar years.

The fact that King Willem-Alexander, Wilhelmina’s great-grandson, in 2012 gave the Nieuwenhuys menorah on an open-ended loan to the Jewish museum on its 90th anniversary “symbolizes the healing of the rupture,” Faber said.