Some think the International Criminal Court is biased against African countries. Prosecuting Israel could lend it credibility.

AMSTERDAM (JTA) — The International Criminal Court is facing sharp criticism from several world leaders for its talk about prosecuting Israelis for war crimes. But some analysts who have followed the ICC think the controversy could be worth the trouble.

On Dec. 20, the court’s lead prosecutor, Fatou Bensouda, asked the Netherlands-based court to decide whether she has jurisdiction to prosecute Israelis. Bensouda, who had previously dismissed calls to prosecute Israelis in the ICC over a 2010 incident involving a flotilla raid in Gaza, referred the judges to a 112-page report from 2015 alleging war crimes both by the Jewish state’s army and Palestinian militant groups during the 2014 Gaza war.

Israeli Prime Minister Benjamin Netanyahu called the push “pure anti-Semitism.” Australia expressed “concern” over the initiative. Even Germany, which rarely speaks critically of the court, has said a trial against Israelis has “doubtful” admissibility and the country is against cases that are “used to politicize before the court.”

A third of the world’s 193 countries, including the United States, have not agreed to grant the ICC jurisdiction in their territories.

But the dispute with Israel and its allies may help the court in addressing an earlier and more disruptive problem: allegations that it is unfairly focused on Africa.

In 2017, the issue nearly caused three African nations, including South Africa, to leave the court. It would have been the worst internal rift in the ICC’s 17-year history.

The International Criminal Court, which is not part of the United Nations, was established in 2002 by dozens of U.N. member states that signed and ratified the Rome Statute.

The statute gives the court a mandate to bring to trial individuals — but not countries or organizations — who are alleged to have committed genocide, crimes against humanity or war crimes but have evaded justice because the relevant judiciaries in their home countries are unable or unwilling to duly prosecute them.

Those conditions are widely thought to exist on several continents, including Asia, South America and even Europe. Yet so far, all 44 individuals who have been indicted by the ICC prosecutor’s office have been African.

“In the eyes of the African leaders, the ICC is biased,” Jacob Zuma, the previous president of South Africa, the continent’s second-largest economy, said in a Johannesburg speech in 2015. “Only Africans they are interested in. This is what has made Africa feel we need to relook at our participation. It looks like it is just meant for us.”

Two years later, Zuma introduced legislation that would make South Africa pull out of the court. His successor, Cyril Ramaphosa, has not yet advanced the legislation.

Burundi left the ICC in 2017. Even Gambia, homeland of the prosecutor Bensouda, announced a plan in 2017 to leave the ICC, though it has apparently changed course.

“The ICC was supposed to address the whole world, but it ended up covering only Africa,” Paul Kagame, the president of Rwanda, which is one of Africa’s most stable economies and has not joined the ICC, said last year.

“From the time of its inception, I said there was a fraud basis on which it was set up and how it was going to be used. I told people that this would be a court to try Africans, not people from across the world.” 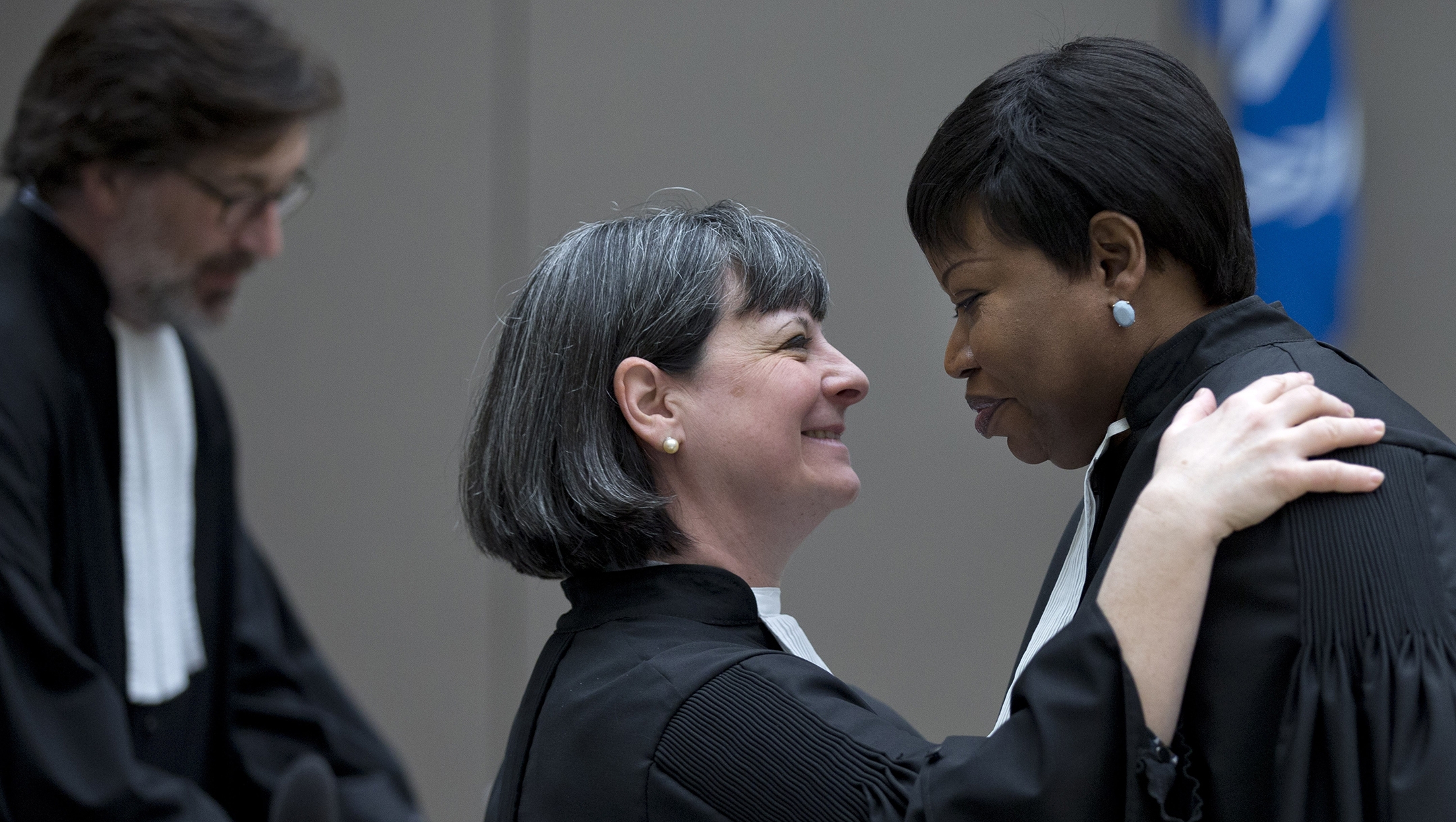 Fatou Bensouda, right, and attorney Paolina Massidda wait for the start of a trial against former Ivory Coast officials at the International Criminal Court, Jan. 28, 2016. (Peter Dejong/AFP via Getty Images)

The ICC has denied having any focus on Africa, arguing its record of prosecution owes to requests from Africa.

“The majority of ICC investigations were opened at the request of or after consultation with African governments,” the court wrote in a response from 2018. In addition to its formal investigations, the court’s prosecutor “is conducting preliminary examinations in a number of countries across four continents,” the response said.

The Dec. 20 pretrial report on Israelis and Palestinians was one of those examinations noted by the court in deflecting criticism over its record on Africa.

In a 2016 column for Bloomberg, Noah Feldman, a Harvard law professor, wrote that it has been “an inexcusable mistake for the court” to prosecute only Africans. To pursue other cases, he wrote, “wouldn’t have been tokenism, because there are, unfortunately, plenty of non-African war criminals.”

“Yet even if it were, the tokenism would have been justified,” Feldman added, “to show that the court is more than the imperialist agent of regime change that many Africans consider it.”

The lesson from South Africa’s plan to leave the ICC, Feldman also wrote, “is that tokenism isn’t always a bad thing. When it comes to demonstrating the legitimacy of a new and powerful international legal entity, a basic requirement is not only to be balanced but also to appear so.”

To Yoram Dinstein, a Tel Aviv University professor emeritus of law and a former chairman of the Israel national branch of Amnesty International, the move on Israelis at the ICC is exactly such an attempt at tokenism.

“Putting Israelis on trial is so manifestly outside the jurisdiction of the ICC that it’s clearly politicized in connection to this problem,” he said of the court’s Africa issues.

Israel is not part of the ICC. The Palestinian Authority is, even though it is not a full member state of the United Nations.

More important, however, is the fact that Israel, whose prime minister is facing corruption charges in court, is widely deemed to have a competent judiciary – an asset that places it outside the scope of the ICC’s declared mission statement.

Earlier this year, Bensouda announced her intention to investigate potential war crimes by U.S. soldiers in Afghanistan. But the court decided against the idea in April, saying it “would not serve the interests of justice.”

The court’s decision, Dinstein said, “owed to the United States’ extremely harsh reaction” to the push by Bensouda. The U.S. revoked Bensouda’s visa to enter the country.

Israel, however, “can’t flex muscles like the United States, so it’s an easier target,” Dinstein posited.